The Bonus March—MacArthur, Eisenhower, and Patton Do Hoover’s Dirty Work 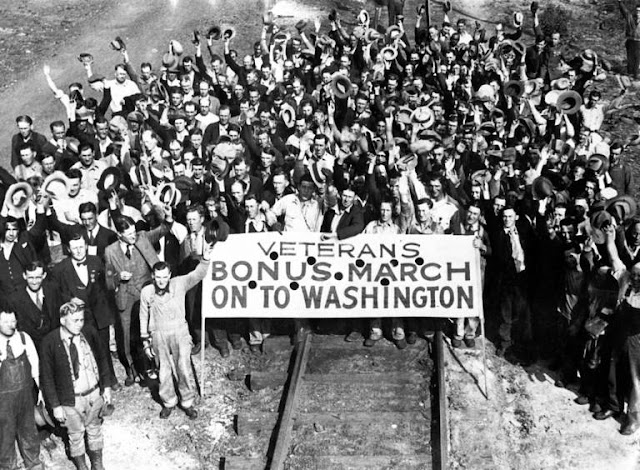 Bonus Marchers in the St. Louis rail yards in late May 1932 ready to hop B & O freights to Washington.  Marchers clogged the freight trains for weeks from all over the country.

Note—On January 6 the highest echelons of the Trump maladministration did everything they could to prevent National Guardsmen or Army troops from defending the Capitol from a violent insurrection.  It was a different story in 1932 when the full force of the Army was unleashed on veterans who never posed any threat to the Capitol or government.

Today is the anniversary of one of the most important mass protests in American history being crushed by military force.  This is a bit of historical trivia that is never more relevant.

On July 28, 1932 Washington, D.C. became a battle zone when President Herbert Hoover ordered the Army to clear out veterans, their families, and supporters who had been camped since June pressing demands for an early payment of a bonus promised to World War I soldiers and sailors.

It was nearly four years into the Great Depression with no relief from an almost total economic collapse in sight.  True unemployment was estimated to be nearing 25% with no safety net other than voluntary soup kitchens.  Tens of thousands of small businesses had failed dropping once solid citizens into poverty.  Farm income had collapsed.  Across the board, conditions were bleak.

Veterans of the Great War were still relatively young men, most in their early 30s.  They had been welcomed home as heroes.  Despite the inevitable post-traumatic stresses of any war’s aftermath, most had married and were raising families when disaster struck.  Largely able bodied and well disciplined, they were perhaps the most employable men in America.  But many, very many, were in desperate shape that summer.

In 1924 under pressure from veterans’ organizations, especially the American Legion, Congress had passed the Adjusted Service Certificate Law over the strenuous objections of President Calvin Coolidge.  Vets had been issued 3,662,374 bonus certificates, the face amount determined by a formula of how many days each soldier served with a greater payment for each day overseas.  The maximum amount due was $500 for domestic service up to $650 payable when the certificates matured in twenty years—1945.

Although veterans were allowed to borrow against a percentage of that sum—eventually raised to 50%, the money had to be repaid with interest.

Congress financed the scheme with annual appropriations of more than $12 million to fund the 1945 payments which were expected to be more than $3.5 billion.  Loans paid out against the certificates had already placed the fund in the red. 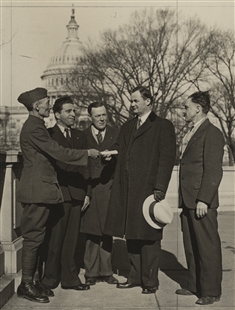 Texas Congressman Wright Patman, with hat in hand, is shown receiving a petitions from Veteran representatives in front of the Capital..  Patman sponsored legislation for an early payment of a promised bonus to World War I veterans.

Democratic Congressman Wright Patman of Texas, then in the second term of his long career, introduced a bill to authorize the payments.  It was ardently opposed by the President and Republicans in Congress.

Hoover, a Quaker, had risen politically largely on his reputation as The Great Humanitarian for his work feeding starving European civilians in the wake of the war.  He was the only engineer until Jimmy Carter to be elected President, a man of meticulous attention to detail, a deep attachment to Republican laissez faire economic philosophy, and a practically physical revulsion to “disorder.”  He had responded to the Depression with cheerleading, rosy predictions for recovery, expressed sympathy for those affected but a firm belief that they were on their own and that the Federal Government had no Constitutional responsibility to them.  More concerned with the holy writ of a balance budget, he urged spending be slashed—a policy that not only did not help but actually deepened the Depression.  Naturally Hoover and unified Republicans railed against the proposed Patman Act as a budget buster.

The Bonus Expeditionary Force was organized by Walter W. Waters, a former sergeant in the AEF—American Expeditionary Force—in World War I, to descend in mass on Washington to pressure Congress to pass the Patman Act.  Veterans and their families from all over the country, but mostly from the East, responded to the call arriving in the city on June 17 as the Senate took up the bill, which had already cleared the House. 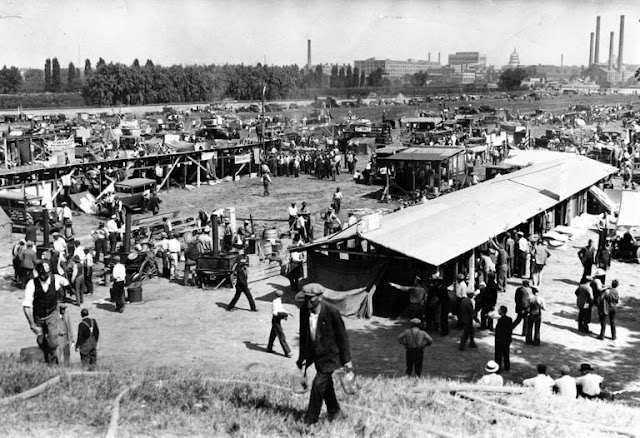 Bonus Army camps may have had ramshackle huts and tents, but they were neatly organized with streets and maintained with military discipline, men assigned to clean-up, cooking, and security duties in addition to regular drilling.

Senate Republicans blocked action on the bill and the Bonus Marchers settled into makeshift camps, nicknamed Hoovervilles.  Although the shabby camps were assembled from what tents could be obtained and junk scavenged from scrap yards, the veteran leaders exercised military discipline.  They were laid out in orderly streets, sanitation facilities were dug and maintained, common kitchens established, and camps patrolled by volunteer M.P.s.  Men had to register producing evidence of honorable discharge to be admitted and were each expected to do duty keeping the camps clean, orderly, and secure.  The men responded to daily reveille and held regular parades.  American flags were prominent.

The veterans were very concerned that the public see them as loyal patriots.  And by in large, despite being denounced as dangerous Communists in the most conservative press, the public was at least sympathetic to them.

Over 17,000 men enrolled. Their wives and children plus some approved volunteer supporters—especially nurses and medical personnel—swelled the camps to a total population of over 40,000.  The main camp was laid out on the mud flats and boggy ground by the Anacostia River across from the core of the city. 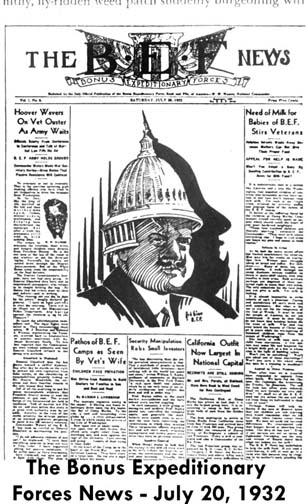 Days before he ordered the Bonus Army dispersed and drive from Washington President Herbert Hoover was lampooned in the professional quality camp newspaper,  He was depicted as the Kaiser with a waxed moustache and wearing the Capital Dome and a German spiked helmet.  Men of every trade and level of education were in the camps, including the experienced journalists, artists, typographers, and printers who produced the paper.

Marchers gathered daily for orderly demonstrations near the Capitol.  By late July it was evident that the Republicans in the Senate would not budge and that the Patman Act was doomed.  Acting on direction of the President, Attorney General William D. Mitchell ordered District Police to “evacuate the city” of bonus marchers on the morning of July 28.

Veteran leaders were taken by surprise by a police charge and the men resisted.  Ill trained police responded by emptying their revolvers into the crowd killing two men outright and injuring dozens.  Enraged, the veterans fought back, pelting police with rocks, bricks, and anything else they could lay their hands on.  A few may have had handguns and fired back or fired with weapons taken from disarmed officers.  Police were forced to withdraw with nearly 70 men injured.  The veterans remained on Pennsylvania Avenue.

Learning of the failure of the police, Hoover ordered the Army to take action.  Army Chief of Staff Douglas MacArthur, in dress uniform and festooned with every decoration he ever received, decided to take personal command.  As commander of the famed Rainbow Division made up of National Guard units, many of the veterans in the streets had served under him. 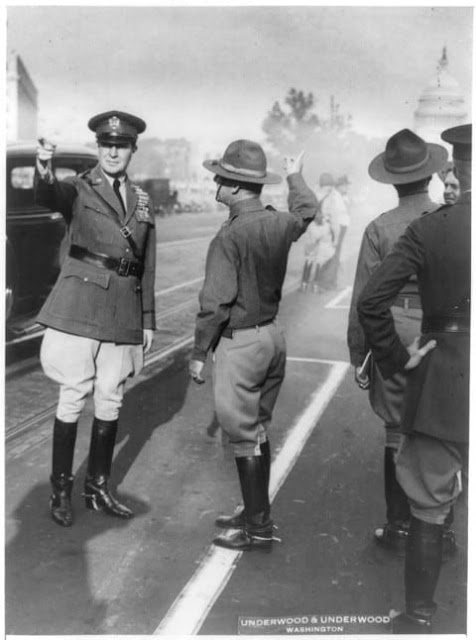 Army Chief of Staff Douglas MacArthur in full dress uniform consults with his cavalry commander Major George S. Patton.  MacArthurs aide-de-camp Major Dwight Eisenhower is the officer at right with his hands on his hips.

MacArthur deployed two full regiments, the 12th Infantry, and the 3rd Cavalry supported by six battle tanks commanded by Maj. George S. Patton.  The Army arrived on the scene about 4:30 p.m. as Federal employees were leaving their offices.  MacArthur, with his aide Major Dwight Eisenhower at his side, ordered his troops to advance.

At first many of the veterans were glad to see their brother soldiers.  Some believed that they had arrived to protect them from the police, others said they thought the advance at first was a parade in their honor.  Then Patton ordered his cavalry to charge, sabers drawn.  As the horrified witnesses from surrounding office buildings screamed “Shame, Shame!” the cavalry crashed into the thick mass of veterans.  As the veterans reeled back toward their camps, the infantry came up with bayonets fixed.  Using adamsite gas, an arsenic based gas inducing violent vomiting, the troops began to clear the camps.  Women, children, and civilian volunteers alike were swept up. 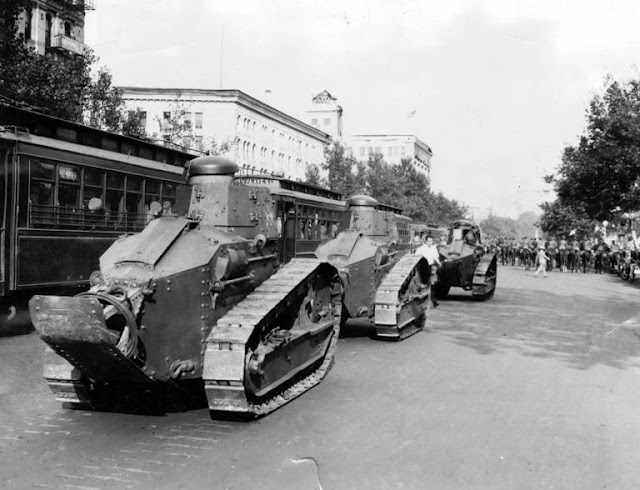 Patton's Light Tanks attacked Marchers on Pennsylvania Ave. as did his mounted cavalrymen behind them with sabers drawn and used.

Against the President’s explicit order, MacArthur crossed the Anacostia into the vast main camp.  Tents and huts were put to the torch, destroying all of the personal possessions of the veterans and their families.  Survivors, including many injured, were scattered into the countryside where local law enforcement personnel hectored them for days as they tried to find ways to get home.

In the end at least four veterans, including two of their leaders, William Hushka and Eric Carlson were killed and an estimated 1,017 injured.  Most historians agree that both of those figures are low because many of the injured were either unable to get medical treatment or afraid to seek it.  In addition, one woman suffered a miscarriage and an infant was killed.  Again historians, believe, based on eyewitness accounts, that other children, especially infants were killed or died later as result of the gas. 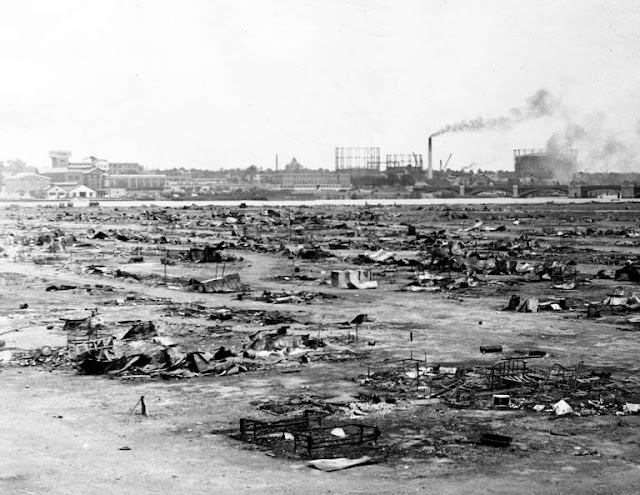 The smoldering ruins of the main camp on the Anacostia mud flap.  Marchers and their families lost all of their personal belongings as they fled for their lives and were hectored and harassed for weeks by local authorities and sometimes vigilante mobs as they tried to make their way home.  Here and there local citizens organized aid and comfort.

Within a week newsreel footage of the attack was being played in every movie theater in the country.  Public outrage played a big part in the defeat of Hoover for re-election that November.

But if veterans thought that Franklin D. Roosevelt would support payment of the Bonus, they were wrong.  Roosevelt wanted to use money for other projects and for direct relief.  But F.D.R. was not about to make the same mistake as Hoover when a smaller Bonus Army appeared in the summer of 1933.  Instead to sending in the Army, he sent Eleanor, who brought tea to the veterans and urged them to instead enlist in the Civilian Conservation Corps (CCC).

Hundreds took her up on the proposal and were put to work building the causeway road to Key West, Florida.  When the Labor Day hurricane on September 2, 1935 killed 258 veterans working on the Highway, public sentiment again swung behind the veterans’ demand.

In 1936 Congress over-rode Roosevelt’s veto to finally authorize the early payment of the promised bonus.

After World War II the G.I. Bill with its promises of immediate money for education or a home purchase was enacted specifically in response to the plight of World War I vets. 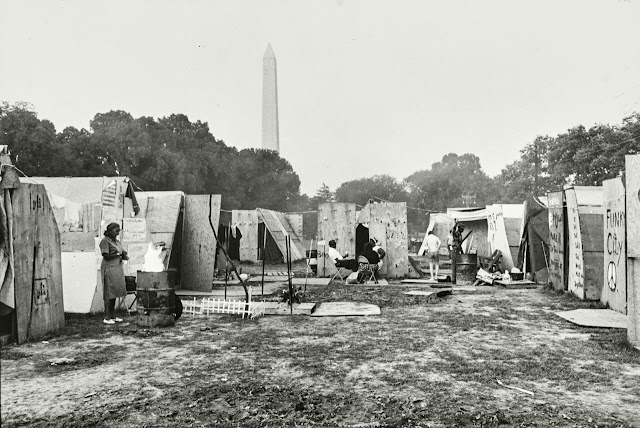 In 1968 Resurrection City, the camp of the Poor People's Campaign was unmolested by troops.  President Lyndon Johnson remembered the Bonus March.

The 1963 March on Washington for Jobs and Freedom called by Martin Luther King, Jr. and his allies was inspired by the Bonus Marchers.  His 1968 plans for the Poor People’s Campaign, which included a camp of protesters, were even more evocative.  The Campaign, conducted after King’s murder, was not dispersed by troops.

Posted by Patrick Murfin at 5:23 AM