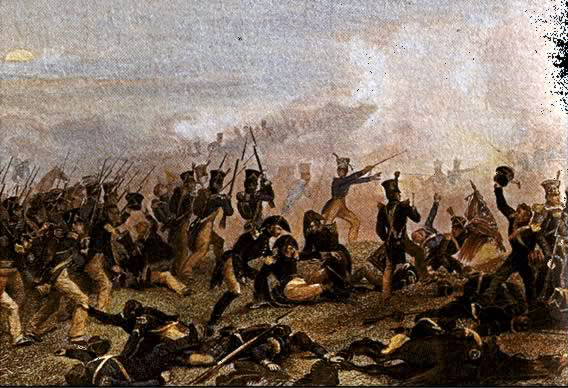 American Regulars and New York Militia advance under General Jacob Brown  into heavy fire on British lines in the opening of the Battle of Lundy's Lane.  Brown is the wounded officer center.

The War of 1812 had been a disaster for American arms.  Cocky and nursing martial delusions, the fading reality of the frightfully narrow victory in the Revolutionary War was replaced in the public mind with a myth of an invincible citizen army.  A cadre of War Hawks had pushed a reluctant James Madison to war.  Led by the likes of the young Henry Clay, the War Hawks hoped to put an end to British support for marauding native tribes on the frontier and to expand the new American Empire by the capture of Canada while Britain was distracted by Napoleon in Europe.

The pretext for the war was the impressment of American sailors at sea by the Royal Navy.  But it was only a pretext.  As outrageous and irksome as the seizures may have been those most affected, New England merchants, sailors, and whalers, were adamantly opposed to the war because of its disastrous results for American trade.

But the War Hawks pressed on.  The Regular Army consisted only of a couple of regiments of infantry scattered widely over frontier posts which hardly ever came together to drill at even the company level and units of costal artillery posted to a string of harbor forts.  That didn’t bother the Hawks.  They believed that a brave armed yeomanry, the militias, and volunteers would be sufficient to march on Montreal and York, the British capital.  They were wrong. 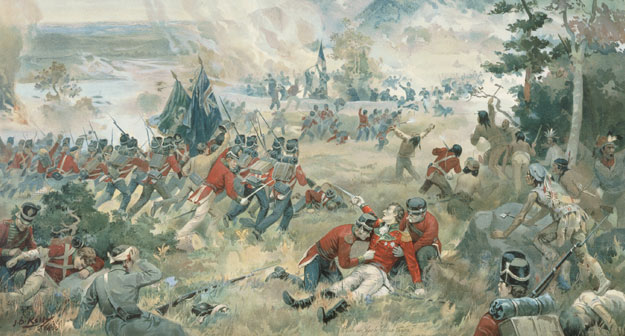 America's first attempt at an invasion of Upper Canada across the Niagara frontier ended in disaster at the Battle of Queenstown Heights on October 13, 1812, the first major battle of the war.  New York militia under Major General Stephen Van Rennselaer broke and ran from smaller British, Canadian militia, and Native forces under concentrated artillery and musket fire.   Lieutenant Colonel Winfield Scott of the 2nd U.S. Artillery had command of the small number of Regulars on Queenstown Heights and was wounded and taken prisoner.  On parole, he made his way to Washington to lobby for the creation of more regular infantry regiments.


Swaggering Yanks did succeed in briefly occupying—and burning—York early in the war but were soon sent reeling back across the border.  Forts Mackinac and Detroit fell and the garrison at Ft. Dearborn (now Chicago) was massacred.  In engagement after engagement the barely trained and ill equipped militia was put to rout, often fleeing at the first sound of musketry or the flash of British bayonets.  Tiny garrisons of Army Regulars were easily overwhelmed.  In upstate New York, across the Ohio Valley, and in the South the British armed and encouraged native allies who rampaged against isolated settlements.  Despite American successes at sea and the eventual naval domination of Lakes Champlain, Ontario, and Erie, British commanders had nothing but well deserved contempt for American troops.

In 1814, buoyed by naval success on the lakes, the Americans would try once again to invade Canada, this time across the Niagara River near the Falls.  The British knew it was coming.  They had re-enforced Canada with battle hardened veteran regiments with experience fighting Napoleon.  In addition, they had large auxiliaries of Indian allies, known to terrify the Americans.  Even their home grown militia was better drilled and armed than their U.S. counterparts and had the added motivation of defending their homes.  They were sure that not only could they defend British North America, but that eventually they would be able to slice through New York State and separate New England from the rest of the country.  That region, dominated by Federalists hostile to the Republican administration, was already restive and threatening secession.  It could be ripe for the picking. 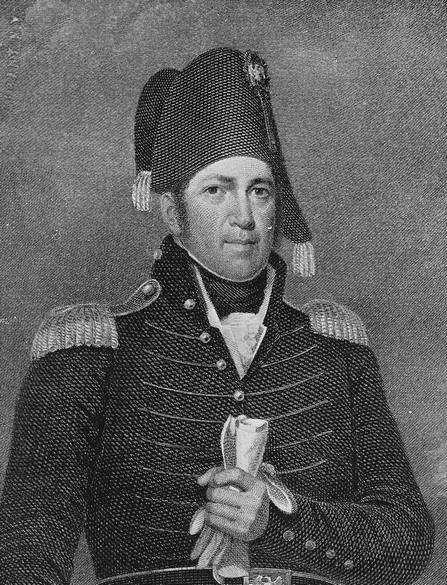 
But this time the Americans had something up their sleeves.  Under the leadership of two young career officers, Major General Jacob Brown and brevet Brigadier General Winfield Scott, Congress and the War Department had finally been convinced to raise new regiments of regular troops.  Quietly they raised, and more importantly disciplined, drilled, and trained two new regiments, the 21st and 25th Infantry, armed them with regulation military muskets tipped with glinting bayonets and secured scarce mobile field artillery to support them.  Unable to secure regulation blue cloth, Scott outfitted his regiment smartly in gray flannel and made sure they had the tall shako caps with shining brass badges and a plume that made the men feel as worthy as any European troops. 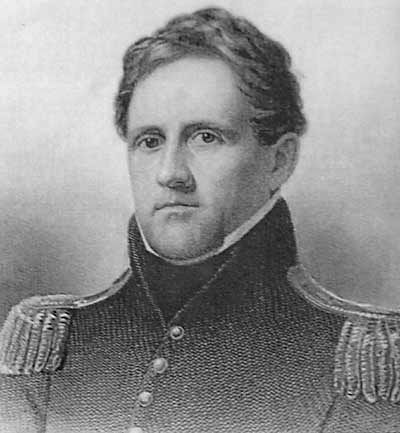 
Under the over-all command of Brown, the two officers divided their force.  The main body, including the 21st and New York Militia crossed the river on July 3, 1814, quickly captured Fort Erie, and began to advance to the north.  Two days later Scott in command of the 25th made a surprise night crossing to the north in an attempt to catch the British in a classic pincher maneuver.

Scott encountered a force of British regulars of about equal strength to his own at Chippewa.  The aggressive Scott lined his men up and attacked.  They advanced with perfect military precision.  When British artillery tore into the ranks and vollies of musket fire felled men by the score, the soldiers dressed ranks and continued to advance.  The astonished British commander exclaimed, “Those are not the Tarrytown militia!  Those are by God Regulars!”  With bayonets lowered Scott put the veteran Redcoats to rout despite taking frightful losses of more than 300 men in his small force. 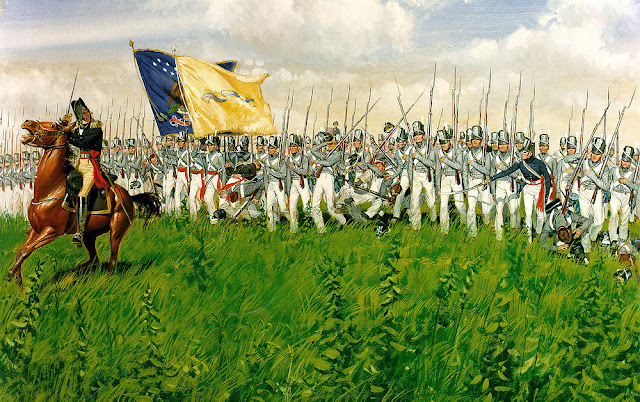 Scott and his smart regulars in grey uniforms and tall shako hats advanced with calm discipline into heavy British fire a Chippewa sending the Red Coats to flight despite heavy losses.


Pressing on, he rendezvoused with Brown and together they continued to pursue the British.  They captured Queenstown but extended supply lines were harried by the local militia and Native auxiliaries forcing Brown to fall back to re-supply.

Meanwhile the British regrouped under General Phineas Raill and advanced south occupying positions at Lundy’s Lane.  Lt. General Gordon Drumond arrived to take personal command.  He ordered an advance along the east bank of the Niagara hoping to force Brown back across the river.  Instead Brown turned around and confidently began an advance against the British at Lundy Lane, an exposed position.  Informed of the advance, Raill ordered a withdrawal, but the order was countermanded by Drumond who also force marched additional troops to the scene from Fort George to the north.

The British were still re-occupying their positions when the Americans attacked on July 25th.  A brigade under Scott was badly mauled by British artillery.  Yet the 25th Infantry outflanked the combined British and Canadian forces and sent them to flight.  Raill was badly wounded and captured by American dragoons.  But the fighting had been fierce and Scott’s forces had suffered heavy casualties.

The main body, regulars under Brigadier General Eleazer Wheelcock Ripley and New Your Volunteers drawn from the militia under Peter B. Porter, relieved Scott’s ravaged troops.  The relatively fresh 21st was dispatched to capture the British guns.  After a devastating volley of musketry and a bayonet charge, they did so.  British reinforcements blundered into the Americans now occupying the heights and were repelled with heavy losses. 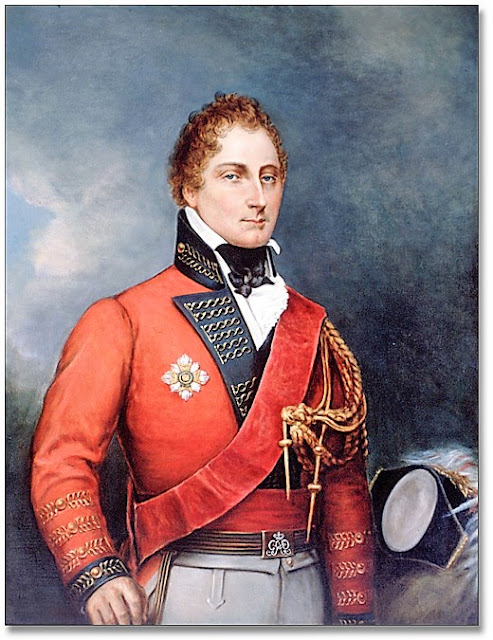 Wounded, Drumond rallied his troops.  Both sides attacked and counter attacked into the night, sometimes firing into their own troops in the smoke and confusion of the battle.  By midnight both were exhausted and fell back from the field.

The next day Brown ordered a retreat to Fort Erie, destroying British fortifications as they went.  The British, too broken to pursue, fell back on Queenstown to lick their wounds.  Both sides had lost about 850 men in the fighting.  Only 700 Americans remained fit for duty, the British had twice that.

Drumond would recoup to fight again.  He lay siege to Fort Erie but was defeated with heavy casualties.

Even the hardened British regulars were horrified by the carnage at Lundy’s Lane.  The fighting was as fierce as anything they had seen in Europe and the casualty figures astronomical.  Drumond in his official report noted, “Of so determined a Character were [the American] attacks directed against our guns that our Artillery Men were bayonetted by the enemy in the Act of loading, and the muzzles of the Enemy’s Guns were advanced within a few Yards of ours”. 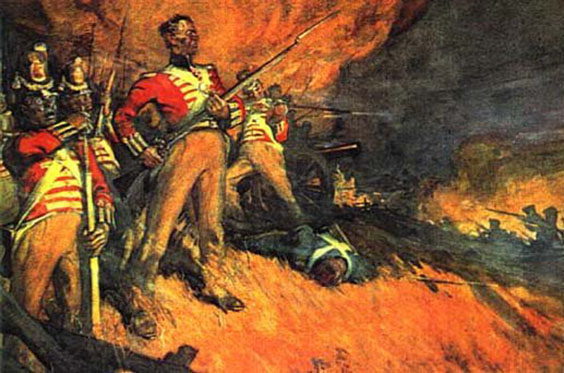 The roll of the Canadian-raised Glengarry Light Infantry Fencibles and disciplined militia units in withstanding the repeated American charges at Lundy's Lane became an important symbol of Canadian identity.  Canadians claim victory in the battle for stopping the U.S. invasion despite leaving the battle ground briefly in the hands of the Americans.


Historians would argue about the outcome of the Niagara campaign and Lundy’s Lane.  Some would call it a draw.  Others call it a pyrrhic American victory.  Most settle that it was a narrow tactical win for the United States but a strategic victory for Britain in that it thwarted the American invasion of Canada.  The events are enshrined in Canadian history, where the battle is sometimes called “our Gettysburg” because it was the high water mark of American aggressiveness and insured that Canada would remain British.

On the other hand, in combination with American Naval victories on the Lakes, the British were forced to abandon any hope of invading the States from the north or sundering New England from the rest of the country.  And the memory of that grim fighting weighed heavily on the minds of the British negotiators at peace talks in Ghent.  Even the disastrous defeat of the American militia at Blandensburg, Maryland and Admiral Cockburn’s subsequent burning of Washington just a few weeks after Lundy’s Lane could not erase British fears that eventually the Americans would be able to raise a real professional army and dominate the continent.

Lundy’s Lane goes a long way in explaining what many historians have regarded as the astonishingly generous terms to which the British agreed at Ghent, essentially the reversion to the status ante bellum of U.S. and Canadian borders.  The British would even have to evacuate the wide swath of Maine that they had captured.

Few Americans know anything about the War of 1812.  Many of those who do assume that it was the American victory at New Orleans garnered the generous peace terms.  But Andrew Jackson’s dramatic victory happened after the Treaty of Ghent had already been signed but before troops on either side could hear of it. 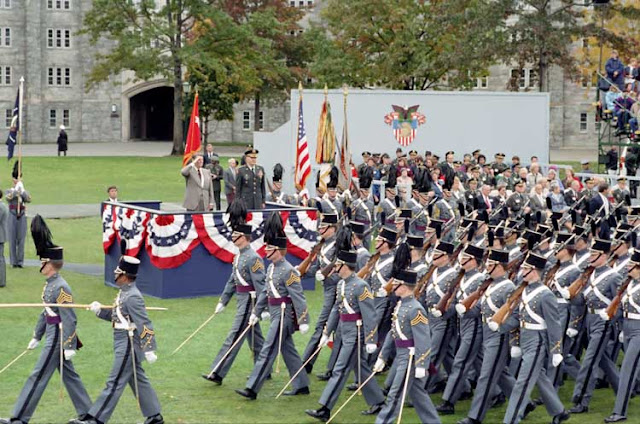 
Most Americans have never heard of the Niagara Campaign or the battles of Chippewa and Lundy Lane.  Even the War of 1812 itself is barely a historical footnote.  The victory lives on in this country in only two ways.  The Cadets Corps of the United States Military Academy at West Point wear gray and don plumed shakos for dress parades in honor of Winfield Scott’s Regulars.

And it has become the by-word of all professional soldiers that only regular troops—not militias, assemblages of short term volunteers or even hastily mustered National Guardsmen—are fit to stand up under concerted hostile fire.

Posted by Patrick Murfin at 7:20 AM