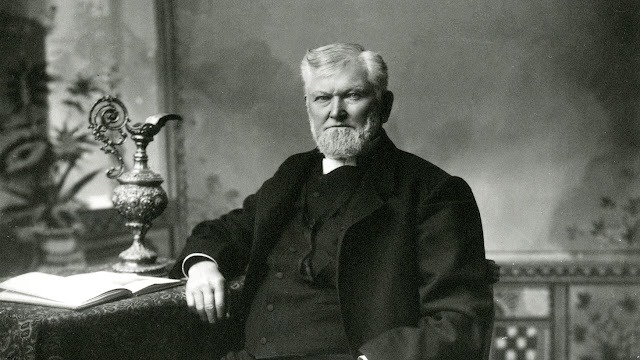 Church of the Latter Day Saints President and Prophet Wilford Woodruff said God told him to do it.

On September 25, 1890 Wilford Woodruff, President and Prophet of the Church of Jesus Christ of Latter Day Saints came down to his office looking haggard.  He had not slept much the night before, he told his secretary.  He had been in consultation with God and in the night God had given him a vision of the fate of the church and its people if the practice of polygamy did not end—the Temples would be sized and violated, the President and the Apostles would be imprisoned, and the possessions of all the people confiscated.  With this revelation in hand, Woodruff went to the Apostles—a council of Twelve senior members—who approved a Manifesto renouncing plural marriage.  On October 1 the Manifesto was made known to the national press.  It was confirmed, at the insistence of the Federal Government at a Church General Conference on October 4.

Although Woodruff insisted he was acting only in accordance with instructions from God and not out of any worldly political considerations, it looked to much of the nation like the Mormons were caving to decades of escalating pressure against them by the Federal government.

Plural marriage, the preferred Mormon term for polygamy, was not part original Mormon practice as reveled to the Prophet Joseph Smith.  It seems to have been introduced through proselytizing and the absorption of a small polygamous sect in rural Maine.  In 1843 Smith received a private revelation approving of plural marriage, at least for himself and the Apostles.  The justification was the need to “rise up the seed of a new priesthood”—rapidly grow the society.

Smith and the Church continued to publicly condemn polygamy and deny participation in it, but it became an open secret in the Illinois settlement of Nauvoo, where the first Temple was built.  Much of the public antipathy to the Mormons grew out of the suspicion that polygamy was sanctioned or practiced and it helped lead to Smith’s assassination and the Mormon exodus from Nauvoo.

Polygamy was not publicly proclaimed until 1852, five years after the Mormons arrived in Utah, and eight years after Smith’s death. Smith’s successor Brigham Young, who had led his people halfway across the continent to their promised land, was an open polygamist. 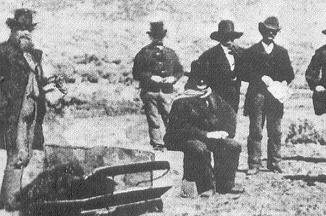 John D. Lee, former right hand man to Brigham Young, sits next to his coffin at Mountain Meadow, the site of a massacre of an emigrant wagon train he was accused of leading, just prior to his execution by firing squad.  Lee's sacrifice was  the cost of ending the Federal Government's Mormon War in 1857, saved the church, and preserved polygamy.

The practice scandalized those back East and political pressure began to build to suppress the practice.  President James Buchannan dispatched the Army to Utah Territory in 1857, beginning the so-called Mormon or Utah War.  The church had over-played its hand in persecuting non-Mormons in the territory when a Mormon militia attacked and massacred an immigrant wagon train from Missouri at remote Mountain Meadows because some of its leaders were thought to have participated in past persecution of them.  The Army eventually occupied Salt Lake City.  Brigham Young was stripped of his post as Territorial Governor and was replaced by an eastern Gentile. Young delivered up elder John D. Lee as the responsible person for the massacre and continued to run a parallel, shadow government.

The infant Republican Party made the suppression of polygamy an important part of its platform.  When Abraham Lincoln came to the Presidency, however, he needed the support of Young and Mormon power in Utah to keep open the overland route to California and as a bulwark against Confederate ambitions in New Mexico.   When the Republican Congress passed the Morrill Anti-Bigamy Act which outlawed polygamy in States and Territories in 1862, Lincoln privately assured Young that he would not attempt to enforce it if the Mormon’s continued support of the Union cause.  A temporary truce of sorts over the issue was in force.

Then in 1874 Congress passed the Poland Act which facilitated charging individuals with violations of the polygamy ban.  As a show of force prominent Mormon leaders, including Brigham Young’s personal secretary, were arrested and prosecuted for plural marriage.  The Mormons reacted with defiance.  In the 1876 the doctrine authorizing plural marriage was officially published in a revised version of the Church’s Doctrine and Covenants for the first time.

The Edmunds Act of 1882 made “cohabitating with more than one woman” a crime. Those who believed in polygamy could not try polygamists either as a judge or juror and polygamists and their spouses were banned from holding any office and territorial voting.   With most Utah’s residents thus excluded from voting anti-Mormons filled the Territorial legislature and took control of the educational system. 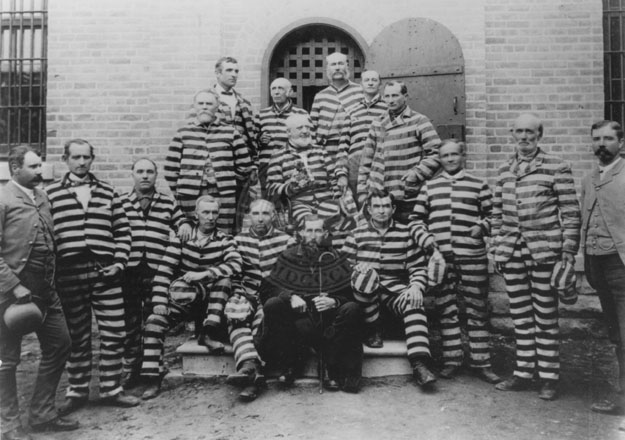 Mormon leaders in Federal Prison for polygamy during the period of the Great Raid.

By the mid-80’s authorities, led by Federal Marshalls, began what the Mormons call The Great Raid.  Communities across Utah and adjacent southern Idaho were visited, homes raided at night, and children separated from their parents and questioned about their parents.  Hundreds, probably thousands of men and their families fled to Mexico or Canada.

The aim to actually destroy the church was made clearer in yet another piece of legislation, Edmunds-Tucker Act of 1887.  The Territorial Militia, composed mostly of Mormons was abolished and ordered to disarm.  Fornication and adultery became Federal crimes meaning that polygamists could be charged with multiple offences.  Children born to polygamist fathers could not inherit from them.

Most ominously, the legislation disincorporated the Church, confiscated its properties, and even threatened seizure of its Temples without which believing Mormons could not uphold the requirements of the faith.  The Mormons were in disarray and despair.  In Utah alone there had been more than 2000 prosecutions for polygamy, adultery, and fornication.  Many men were convicted on multiple counts for each year married to each wife and were essentially held in prison indefinitely.  Courts held the ban against cohabitation even extended to women in separate households if they were financially supported in any way, instantly impoverishing thousands of women.  Much of the church leadership was in hiding and many had active warrants out against them.  President and Prophet John Taylor died while in hiding.

Taylor’s successor Woodruff was desperately seeking a solution.  In 1887 and 1888 he had asked the Quorum of Apostles if the Church should abandon polygamy.  In both cases Woodruff was told that they could not bend to temporal law in violation of revealed truth. Only the revealed word of the Lord could end the practice. 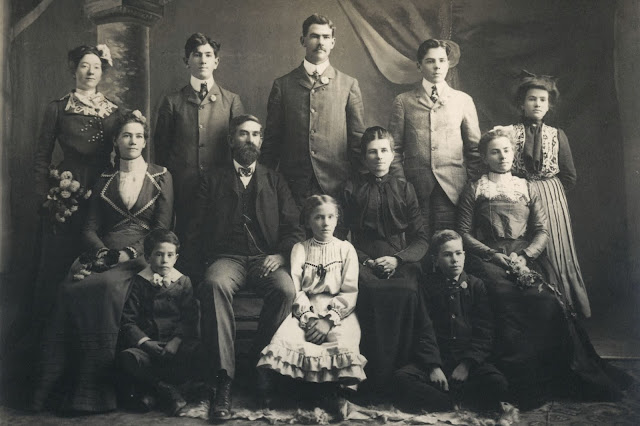 A polygamous Mormon family circa 1890.


In 1890 the Supreme Court upheld the Edmunds-Tucker Act and legal action to seize church properties, including the Temples, was begun.  Additional legislation was introduced in Congress that would bar all Mormons from holding office or voting whether they practiced plural marriage or not.

It was in this context that God apparently finally spoke to the President.

Even though the Manifesto as approved by the General Convention allowed previously married men to keep their wives and families and skirted the issue of sanctions for violating the ban, it was enough to relieve pressure on the Mormons.  Raids and prosecutions fell off sharply and movement on the suit to seize church property was halted.

In 1893 Church property was returned and in 1894, exactly four years after Woodruff’s chat with the All Mighty, Democratic President Grover Cleveland issued a general amnesty and the Church replied by the dissolving the Mormon dominated People’s Party.  Although Mormons generally tended to support Democrats because their persecution was spearheaded by the GOP, Church leaders split affiliation with the two parties to assure support for both for the final push to the long cherished dream of statehood.

In 1896 Utah was finally admitted to the Union and the Church issued another Manifesto, this one supporting the separation of Church and State.

But the controversy was not entirely over.  Senate Republicans blocked seating Senator elect Reed Smoot because polygamy had not been eradicated in Utah.  Indeed, some plural marriages continued to be sanctioned in Utah by some members of the Apostles.  New President Joseph F. Smith, a great-nephew of founder, issued a Second Manifesto on Polygamy which explicitly excommunicating those practicing polygamy.

To this day Church leaders flatly declare that no recognized members of the church, practice plural marriage.  Yet it persists, largely in remote and rural areas.  A tiny Fundamentalist Church of Jesus Christ of Latter Day Saints and other break-away groups have been organized and continue to endorse the practice.  Prosecutions are once again on the rise in Utah in the early 21st Century. 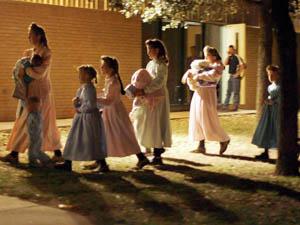 Women in polygamous marriages and their children after raids on a break-away Mormon sect in Texas generated considerable sympathy for the families.

Meanwhile some sympathy and tolerance for the practice has grown with reports of suffering caused families in remote areas by occasional continuing raids and arrests.  The best public relations coup of all, however, was the long run of Sister Wives on the cable channel TLC, a reality show that has painted one polygamous family in a mostly positive light. 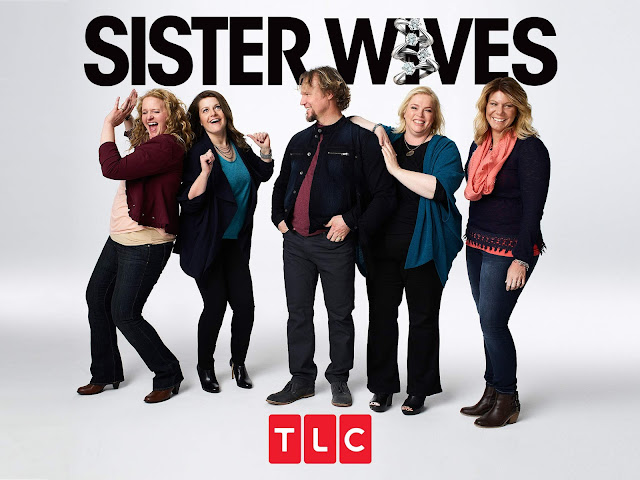 A general live-and-let-live attitude on sexual and family matters has largely culturally usurped traditional American Puritanism.  In a way, just as the most vocal opponents of marriage equality had warned, tolerance of same gender matrimony, has left the door ajar for other traditionally so-called deviant arrangements, including plural marriage.

Meanwhile the Mormons have carefully burnished a public image of fostering an idealized, if paternalistic, nuclear family life featuring clean living, close relationships, and fervent support for traditional values.  On social issues, particularly abortion and marriage equality, they have sought to make common ground with the Evangelical Religious Right, and conservative Catholics.

Can the Saints ever shake the stained heritage of polygamy?  Can they find safety and security from persecution as part of a broader Conservative movement?  Will the Evangelicals who, in their hearts-of-hearts regard Mormonism as a satanic cult long allow political expediency to override their urge to smash heretics and perceived others? Stand by for the results.