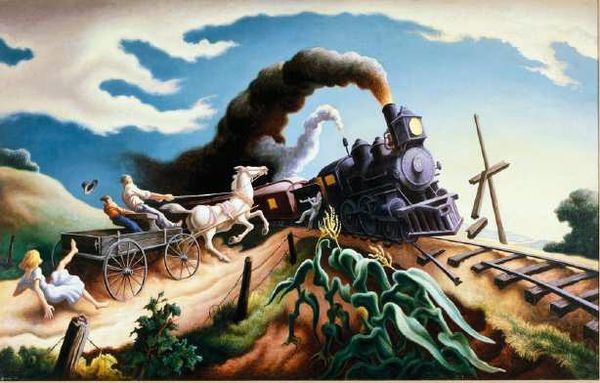 The wreck of the Fast Mail not only inspired the song, but this dramatic painting by regionalist master Thomas Hart Benton.

There seems to be something about a train wreck that inspires a song.  Just about everybody knows Casey Jones.  Just two years after the disaster that inspired that tune, the Southern Railroad express known as the Fast Mail came barreling down a steep grade at a high rate of speed and overshot a tight radius turn right before a trestle sending the engine and train to a spectacular fiery crash at the bottom of a steep ravine.

Within 24 hours a witness/rescuer at the scene had penned a ballad set to the melody of a popular fiddle tune, The Ship That Never Returned, the same tune used latter for Charley on the MTA.  Just who that person was later became a matter of great controversy and an epic lawsuit.

The Fast Mail, designated as No. 97, ran on contract with the Post Office for service from Washington, DC to New Orleans via Atlanta.  That made it one of the highest volume mail trains in the South.  To encourage on time performance the contract included penalties for each minute the train arrived behind schedule at several stops along the route, including Spencer, North Carolina.  Railroad officials regularly pressured train crews to make up lost time to avoid the penalties.  As a result, engineers often operated trains well above designated speeds.

The need for speed had contributed to a fatal accident in April of 1903 when the engine smashed into a boulder on the tracks near Lexington, North Carolina derailing the train and killing the engineer and fireman.

On September 27 that same year a brand new Baldwin ten wheel 6-5-0 engine, #1102 which had been delivered just a week earlier was hooked up to No. 97.  For some reason, the train was already running behind schedule when it left Washington.  It rolled into Monroe, Virginia, a division point where train crews were changed, a full hour late.  The new engineer, 33 year old Joseph A. Broady, known to his friends and crew as Steve Broady, was handed orders to make up the time before the next Post Office penalty point at Spencer.  He was told to skip one regular junction stop entirely.  Although not explicitly ordered to go over the average 35 miles per hour limit between Monroe and Spencer, his bosses knew that he would have to exceed that.

The Mail Clerks, express messenger and Armistead were all in the Post Office car attached directly behind the tender and ahead of the freight cars.

The scheduled running time for the 166 miles from Monroe to Spencer was four hours, fifteen minutes, an average speed of approximately 39 mph.  To make up the one hour delay, Broady would have to run at an average 51 mph over track known for its steep grades and tight curves.  Witnesses thought he was running at least 55 mph on the downgrade headed into the 45-foot high Stillhouse Trestle.  Broady applied his brakes but could not reduce his speed enough to make the sharp curve leading to the bridge. 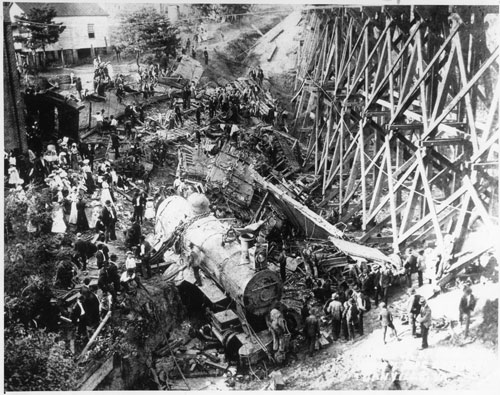 The Baldwin engine and ruins of the burnt out train at the bottom of the ravine next to the trestle surrounded by gawkers, including a large knot of women just to the right of the engine.

The engine sailed off the track smashing to the bottom of the gorge next to the trestle.  Fire quickly spread and burned out of control completely consuming all the wooden cars and almost all the mail.  A crate of live canaries broke open in the crash and the birds escaped before the fire consumed the car.  Many lingered in the area and became an odd reminder of the crash.

Eleven men died in the crash, including all the train crew.  The two firemen were burned beyond recognition, and it was impossible to determine which body was whose.  Most of the 7 survivors were injured but survived because they jumped from or were thrown from the wreck.  The distraught express messenger went home and immediately resigned.  Some of the surviving mail clerks did return to service, though none again on the Fast Mail.

Engine #1102 was salvaged, repaired, and put back in service.  It ran for 32 more years before the Southern scraped it in 1935.

The railroad, of course, placed all the blame on the engineer, and even issued a report exaggerating his speed.  They never acknowledged any culpability for issuing the orders that made speeding inevitable.

The Fast Mail continued to run until 1907 when service was canceled in a re-alignment of mail contracts. 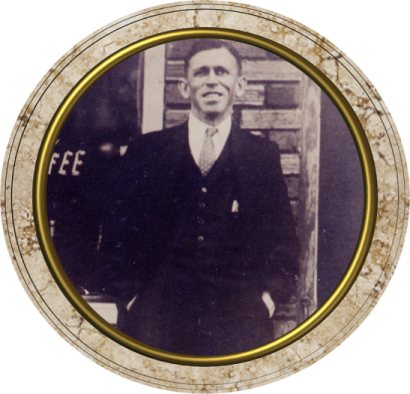 Fred Jackson Lewey was one of the first on the scene of the wreck and reported that he wrote a poem about it the next day.  Fiddler Charles Noell tinkered with the lyrics and fit them to the tune of The Ship That Never Returned.

Among the many local residents who flocked to the scene of the accident to assist in rescue efforts was Fred Jackson Lewey who worked at a cotton mill near the base of the trestle and who was the cousin of fireman Clapp.  He said he sat down and wrote lyrics the day after the wreck.  His friend Charles Noell contributed to the words and suggested the tune.  The Wreck of the Old 97 was widely played in the area and became a standard at barn dances across the South in the next 20 years.

The first recording was made for Victor by the nearly blind primitive fiddle player G.B. Grayson and his partner Henry Whitter who played guitar, harmonica, and sang.  Whitter also altered the lyrics.

Vernon Dalhart's smash hit recording of The Wreck of the Old 97.

Not long after that in 1924 Vernon Dalhart sold more than seven million copies and his version became the bestselling non-holiday recording of the first 70 years of the recording industry.  It is the record that is usually cited for the birth of successful commercial country music.

Success like that often brings people out of the woodwork claiming a piece of the pie.  David G. George, 1927 a former brakeman, railroad telegrapher, and week-end musician claimed that he was on the scene for the rescue efforts and penned the original lyrics himself.  He sued Victor and won a judgment for past royalties from Victor $65,295.  The company appealed three times, losing each time until the case got to the Supreme Court, which overturned the judgment.

Today experts are divided between the conflicting claims but most side with Lewey and Noell. 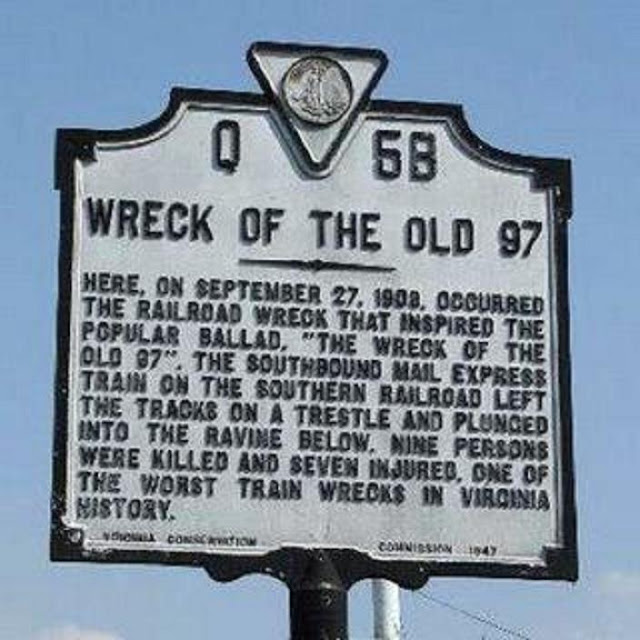 The Virginia state historical marker near the site of the wreck.