By Some Reckonings Today is the U.S. Army’s Birthday 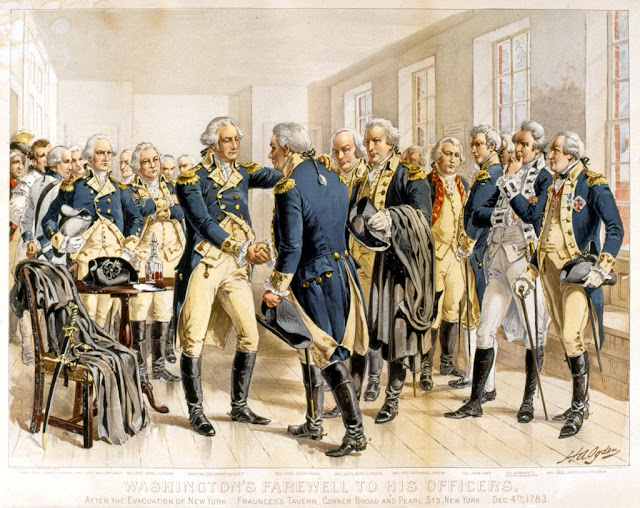 General George Washington demobilized the Revolutionary War Continental Army in May 1783 and bid a formal farewell to his officers at Fraunces Tavern in New York City in December.  His hope that Congress would authorize a small regular army under General Henry Knox was dashed.

If asked about the origin of the United States Army, most folks, if they have a clue, would point to the American Revolution.  On June 14, 1775, the Second Continental Congress created the Continental Army and the next day unanimously elected George Washington commanding general.  Volunteer units from several colonies already besieging Boston alongside militia units were mustered as the First Regiment of the Line.  Washington soon joined the troops, and the war was on as a seriously united effort.

All of that, of course, is true.  But almost as soon as the war ended the Continental Army was demobilized and essentially disbanded by order of General Washington on May 12, 1783 after Congress, now under the Articles of Confederation, rejected his appeal for a small standing army to be placed under the command of General Henry Knox.  Congress was deeply fearful that a standing army would lead inevitably to monarchy or dictatorship—and more than a few feared that the popular Washington might use it to have himself made king.

One hundred artillerymen and 500 infantry were kept on the payroll.  The artillery company was stationed at West Point, essentially security guards for the large arsenal there.  The infantrymen were scattered in small numbers at forts and outposts across the long western frontier and the border with British Canada.

Those infantrymen were totally unable to face the challenge of continuing warfare on the frontier by native tribes still allied with the British.  The plight of settlers west of the Alleghenies and south of the Ohio was soon desperate.

And this tiny Federal force was not even regularized, it operated out of necessity but with no legal foundation.

In June of 1784 Congress formally rejected Washington’s scaled back plans for a 700 man army.  On May 12 they discharged all the troops except for 25 caretakers at Fort Pitt and 55 at West Point.  On June 14 of that year Congress reluctantly agreed to raise a force of 700 men for one year’s duty on the frontier under the command of a Lt. Colonel. 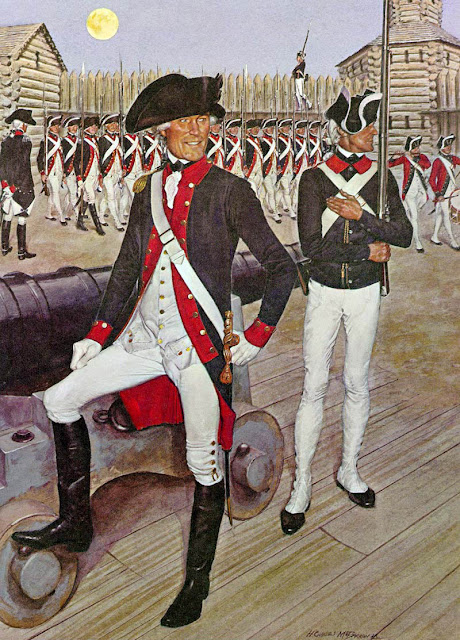 Members of the Army's First Regiment on frontier post duty.

On September 29, 1784 the War Department formally issued the order creating what many considered just a temporary resurrection of the Continental Army.  Four companies of infantry and two of artillery dubbed the First American Regiment came under the command of Colonel Josiah Harmar of Pennsylvania.

The creation of the First Regiment is considered the true birthday of the Regular U.S. Army.

The idea that a tiny regular army supplemented with local militia and, if need be short term musters of volunteer regiments would be enough to keep a lid on the powder keg on the frontier was ludicrous.

Some of the bloodiest, most intense, and widest ranging Indian warfare in American history continued for years on the frontier.  On November 4, 1791 a large force of volunteers, militia, and some regular companies under General Arthur St. Clare was routed and nearly massacred by native forces of the Western Confederation near Fort Recovery in Ohio. 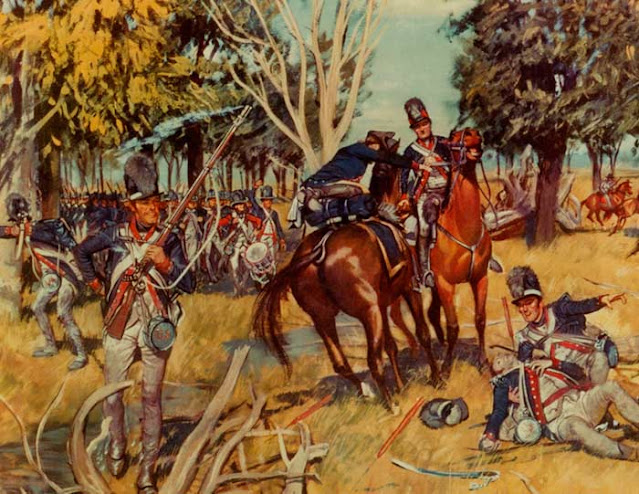 The Legion of the United States during the campaign against the native Western Confederacy leading to the decisive Battle of Fallen Timbers in 1794.

This disaster finally encouraged Congress to expand and reorganize the Army.  With the approval of new President Washington and his Secretary of War Knox, the Legion of the United States was created with General “Mad” Anthony Wayne in command.  It was organized into four sub legions, two of which were converted from the First and Second Regiments, and two more to be recruited and trained.

After extensive training in 1792 and ’93 the Legion took to the field for operations against the Western Confederacy south of the Ohio.  The large, disciplined force, with the assistance of by now veteran militia, was successful in a campaign in Kentucky that drove most of the hostiles north of the river.

Wayne and the Legion pursued the tribes into their home territory north of the river, burning several principal towns and finally decisively defeating them at the Battle of Fallen Timbers on August 4, 1794.

With the frontier seemingly secured, the Legion was disbanded in 1796 and the reduced Army was reorganized into regiments the following year.  Some historians take this as the real origin of the Regular Army, but since the First and Second regiments were reconstituted, most take the 1784 date. 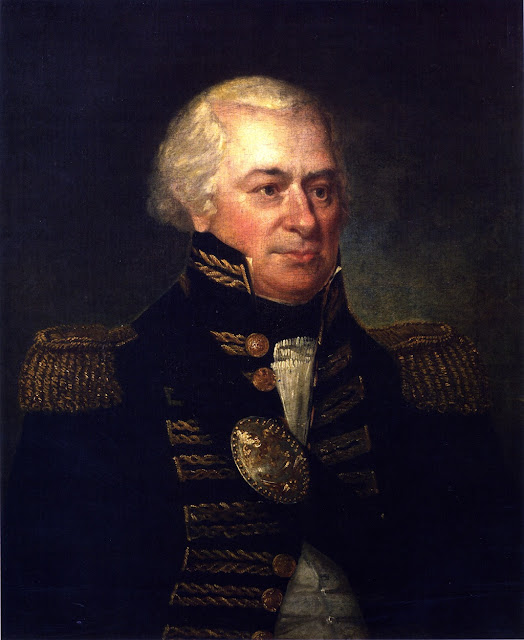 Major General James Wilkinson, first Commanding General of the U.S. Army,  was a brave soldier in combat, but an inveterate schemer, Spanish secret agent, and plotter of various treasons.

The new Army was placed under the command of General James Wilkerson, an officer with a checkered reputation for rascality, but a splendid battle record in the Revolution and under Wayne at Fallen Timbers—despite the fact that as a double agent for the Spanish in New Orleans he may have leaked some of the Legions operational plans to British agents active with the Indians.

Later that year the Whiskey Rebellion broke out in Western Pennsylvania.  To suppress it Washington, at the urging of his closest advisor, Alexander Hamilton raised the largest army the new nation had ever put into the field, over 12,000 troops, mostly federalized militia including for the first time, draftees, and a handful of Legion troops.  He personally took to the field to command the force, which made quick, and largely bloodless, work of suppressing the rebellion.  But that confirmed the worst fears of old anti-federalists and Thomas Jefferson’s nascent Republican faction that a large army would be used to suppress the people in defense of a powerful elite. 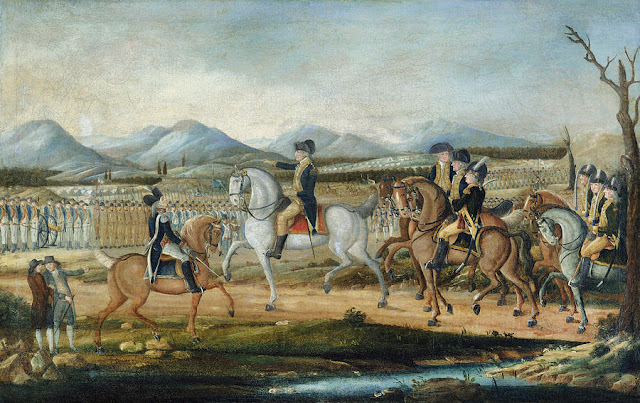 President George Washington took command of the large army raised to suppress the Whiskey Rebellion in western Pennsylvania is seen here reviewing the troops.  Alexander Hamilton to command in the field for the brief, largely bloodless campaign.

After retirement Washington was recalled to command the Army in 1798 by President John Adams as a possible war with France loomed.  A large force was raised, mostly Volunteers with regular Army regiments.  Washington helped plan the formation and logistics but left operational command to his favorite Hamilton who expected to take the field in operational command.  Hamilton had grandiose dreams of martial glory, including the conquest of Louisiana.

Washington died at home in Mt. Vernon still nominally in command on March 1, 1799.  The crisis with France passed, much to Adams’s relief and to the disappointment of Hamilton.  The Volunteer Army was disbanded, and the Regular Army shrunken.

Wilkerson was restored to command and embarked on more plots with the Spanish and later with disgraced Vice President Aaron Burr who planned a filibustering campaign to either capture Texas from the Spanish or perhaps create a break away nation west of the Appalachians. At the last moment the Commanding general betrayed Burr, but that is another story.

The Regular Army remained undermanned and scattered in coastal defense fortifications and along the frontier.  It was totally unprepared for the War of 1812...yet another story. 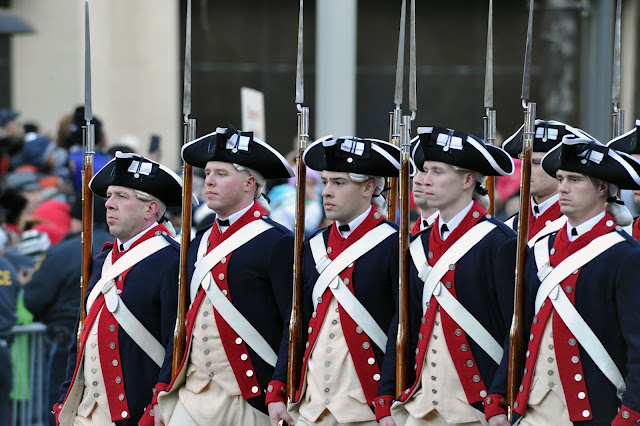 The Old Guard of the 3rd Infantry Regiment still marches in the post-Revolutionary War of first U.S. Regular Army troops for special ceremonial occasions like this Presidential Inaugural parade.


The First Regiment was consolidated with four other regiments in the post War Of 1812 reorganization in 1815 as the 3rd Infantry Regiment, which is the oldest active Regiment in the Army.  Now known as the Old Guard it has mostly ceremonial duties around Washington including soldier funerals at Arlington National Cemetery, standing guard at the Tomb of the Unknown Soldier, Presidential escort, and providing troops for review for visiting foreign dignitaries.  It is the only unit in the army to always march in parades with fixed bayonets in honor of its charge at the Battle of Cerro Gordo in the Mexican War. Units from it fought in Vietnam and companies have been dispatched to support deployments in the Horn of Africa, Djibouti, and at Camp Taji, Iraq in recent years.