The Finale—The Formal Surrender of Japan 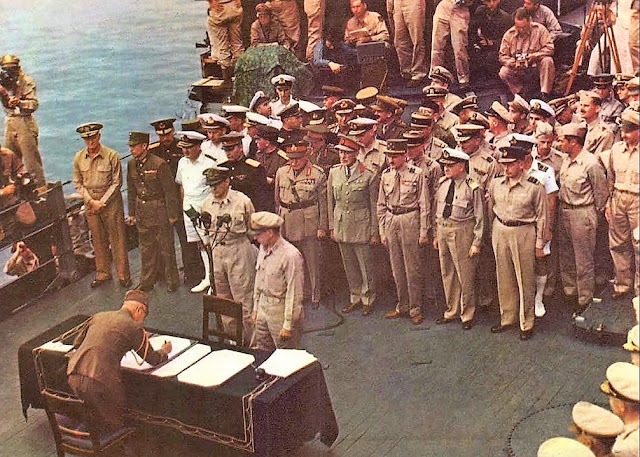 General Douglas MacArthur orchestrated the most humiliating surrender possible for the Japanese Empire and it's officer class.

One day after six years of war in Europe began the even longer war in Asia and the Pacific officially ended on September 2, 1945, seventy.  On that day General Douglas MacArthur, Supreme Commander of the Allied Southwest Pacific Area (SWPA) ordered members of the Japanese Government and High Command to assemble to sign the formal documents of unconditional surrender.

The Japanese had been at war even longer than their Axis allies, since the 1937 invasion of China or, if you count low grade guerilla resistance, since the 1931 annexation of Manchuria.  For them, particularly the Imperial officer class who had pushed aggressive expansion, the ceremony was an almost unbearable and ignominious occasion.

The war had begun with such high hopes.  To them it was to be the extension of Japan’s unique high culture to the backwards nations of Asia and a final end to European encroachment and colonization.  And one after the other they had defeated and expelled the British, French, Dutch, and Americans from their possessions.  The vaunted Greater East Asia Co-Prosperity Sphere would bring Asia to the forefront of the world and, of course, enrich Japan.  The struggle, undertaken for the Emperor, was a divine mission. 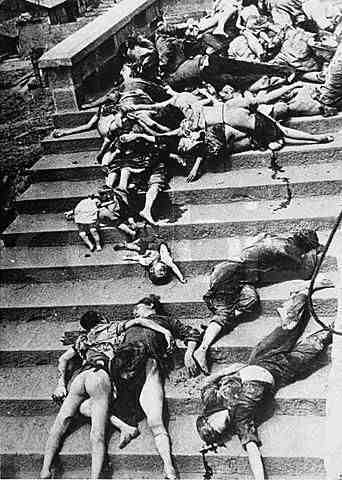 The bodies of women, many of them rape victims, and children during the infamous Rape of Nanking, one of the of  the Japanese atrocities that fueled the deep hatred of American and allied troops for their enemies in Asia.


The Japanese had conducted their seemingly irresistible advances with a relentless cruelty that shocked the “civilized” world but was totally in keeping with their own traditions and particularly with the Samurai culture as redefined for modern industrial warfare.  The Rape of Nanking was not a trumped up propaganda ploy as charges of German atrocities in Belgium during World War I had been.  It set the stage for behavior to civilian populations that fell under their control, at least during the period of initial attack and occupation.  The brutal treatment of American and allied prisoners, exemplified by the Bataan Death March was directly due to the contempt the martial culture had for any troops who did not fight “honorably” to the death.

As a result of these depredations, and deeply ingrained Western racism, the war in the East was matched by equal savagery by the Allies.  The Japanese were painted as sub-human in a way that even the Nazis never were.  After some of the most brutal combat in history on all sides the Allies had crept to the doorstep of the Home Islands when the U.S. unleashed—twice—a new horror of its own, atomic weapons.

Faced with what he feared might be the annihilation of his people, the Emperor, against the wishes of many of the same officers assembled on the deck of the USS Missouri, had finally ordered the capitulation of the Empire on August 15. 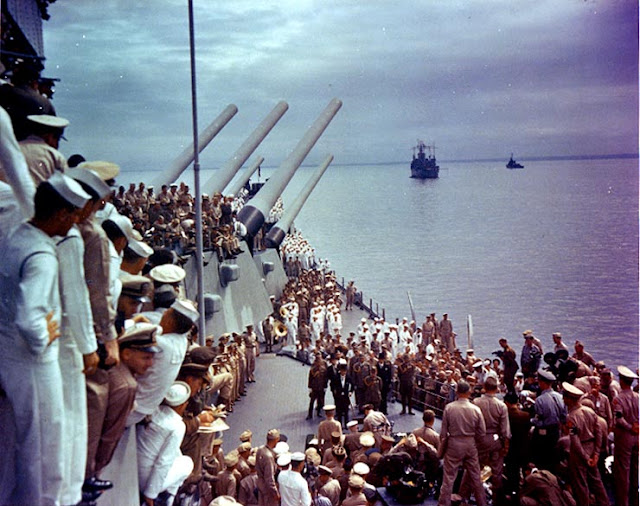 Sailors crowded the decks of the USS Missouri to witness the surrender.


It took until September 2 for MacArthur to orchestrate the final drama.  Holding the ceremony on board the Missouri, a modern battleship that replaced those sunk in the attack on Pearl Harbor emphasized the humiliation.  As did other flourishes like displaying the flag of Commodore Mathew Perry’s flag ship from his 1853 mission which forced the reclusive Japanese to open trade with the West.  Also pointedly on hand as official witnesses were General Jonathan Wainwright, who had surrendered the Philippines and been on the Bataan Death March, and British General Arthur Percival, who had surrendered Singapore.  MacArthur and other American officers present did not attend in dress uniforms but appeared without jackets or ties in standard duty kakis.  Most Allied officers wore more formal uniforms and full decorations.

The signing ceremony itself was starkly simple and lasted just 23 minutes from start to finish.  The instrument was first signed by the Japanese Foreign Minister Mamoru Shigemitsu and then General Yoshijiro Umezu, Chief of the Army General Staff. MacArthur then signed as the newly designated Supreme Commander for the Allied Powers who would be charged with occupation and governance of the defeated nation.  A parade of officers representing all Allied combatants in the East followed to add their signatures:  Admiral Chester Nimitz, the U.S; General Hsu Yung-Ch’ang, the Republic of China; Admiral Sir Bruce Fraser, United Kingdom; General Kuzma Derevyanko, Soviet Union (which had belatedly declared war on Japan only days earlier); General Sir Thomas Blamey, Australia; Colonel Lawrence Cosgrave, Canada; General Philippe Leclerc, France; Admiral C.E.L. Hefrich, the Netherlands; and Air Vice-Marshal Leonard Isitt, New Zealand.

Each signed two copies of the instrument.  The Allied copy was bound in fine leather, lined in gold, and embossed with the seals of the U.S. and Japan.  The Japanese copy was crudely bound in canvas with no seals or ornamentation.

Throughout the ceremony MacArthur never spoke to or even looked directly at his Japanese counterparts.  Afterwards he turned and walked away without shaking hands.  It was over—both the ceremony and, finally, World War II.

Two different days are recognized as V-J Day.  For Britain and most of the rest of the world it is August 15 when the Emperor announced capitulation.  President Harry Truman officially proclaimed September 2 V-J Day for the United States. 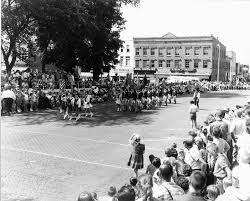 For several years following the war it was a widely celebrated event.  In Woodstock, Illinois it was the occasion of an annual festival featuring a parade and a famous Drum and Bugle Corps competition until the 1970’s.  But time has erased the great feeling of relief and joy that the nation and world felt when THE War was finally over.  Most years the anniversary goes unnoticed except by the dwindling veterans and their immediate families.