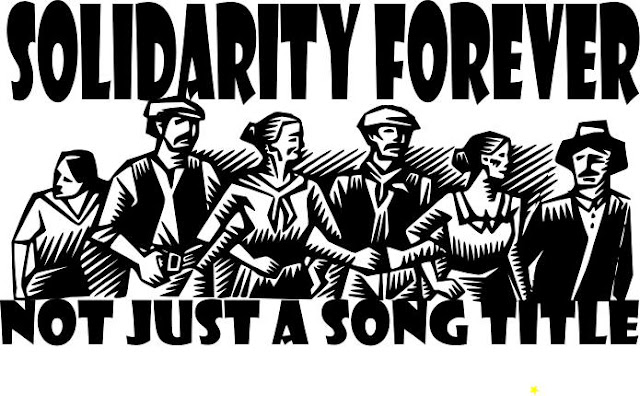 Note:  It was my privilege to be asked to speak—and to host one year—from 2015 to 2019 at the annual Labor Day Event on Woodstock Square sponsored by McHenry County Progressives.  Today we will look back at the meat of my talk in 2016—a Presidential election year that turned out to have disastrous results.  Specifics about that race are now dated, but the themes they represent are all back this year, as you can read.  My remarks on the working class virtue of solidarity were adapted from earlier material, including one of my Labor Day sermons at the old Congregational Unitarian Church in Woodstock.

We gathered here last year [2015] for the first time, a small band of folks called together by some local fans of Bernie Sanders who wanted to celebrate his hero Eugene V. Debs and his connection to Woodstock.  As a fan of both, an old Wobbly, and a soapboxer, I was thrilled to be asked to participate.

A lot has happened in the last year and here we are again.  Bernie Sanders, thanks to folks like those who organized the Labor Day event, went from being an obscure longshot, to the leader of a wide and deep political revolution, and came tantalizingly close to winning the Democratic Party nomination.  When he didn’t some folks were heartbroken, other mad.  Some picked up their toys and went home in a sulk and huff.  Some picked up Bernie’s challenge to keep the Revolution going by going deep and wide—running for local office and trying to recapture Congress from troglodyte Republicans.  That’s what the folks here in McHenry County have done.

Some folks swore that no matter what they would never vote for Hillary Clinton, who apparently has horns and is the spawn of Satan, no matter what, no way, no how.  Others have either swallowed hard and followed Bernie’s appeal and decided to vote for Hillary, or with more enthusiasm vowed to actively work for her election along with the rest of the Democratic ticket. 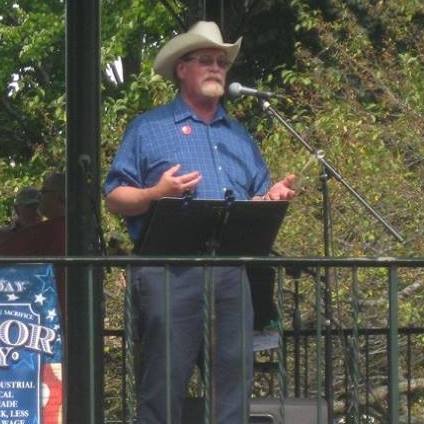 The Old Man explaining the Working Class Virtue of Solidarity at the 2016 Labor Day event in Woodstock Square.

People who were comrades in the campaign struggle a couple of months ago but are on opposite sides of the Hillary divide, are hurling invectives at one another, denouncing each other as traitors or saboteurs.  Relationships have been shattered.  That longed for political revolution is crippled by dissention.

Meanwhile genuine naked fascism has arisen as a mass movement and swallowed the traditional conservative party.  Ordinary Americans who have seen their lives and futures sacrificed time and again to corporate greed have been taught to blame their woes on a rotating cast of others—Mexicans and emigrants this week, Muslims and refugees next, women, gays, Black lives Matter protesters, scientists, the sick and the elderly.  Violence is in the air like the whiff of gunpowder.

Considering all this, on this Labor Day I want to commend to you the working class virtue of solidarity even if you have never considered yourself a worker. 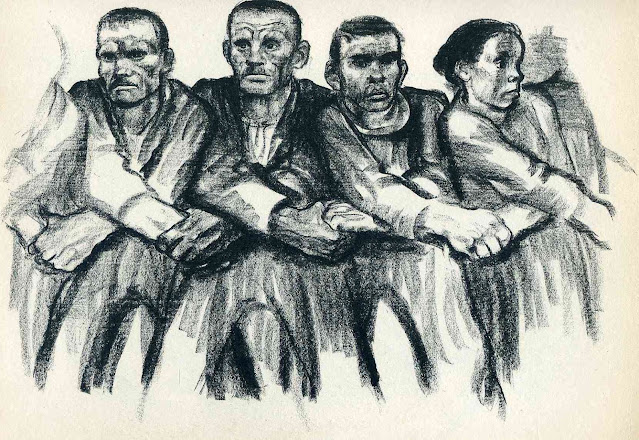 First we need to consider what solidarity is not….

Solidarity is not sympathy.  Sympathy is a passive emotion.  It also implies a separation from the object of sympathy and can teeter on pity, which is just sympathy tinged with revulsion. Empathy might be closer to the meaning in that it implies a common understanding of the distress.  But empathy is also passive.  Solidarity demands action.

Solidarity is not charity.  Charity implies a power and privilege differential.  The more powerful and more privileged deign to give to the less fortunate who are expected to respond with appropriate gratitude and humility.  Solidarity is mutual aid among equals.

Solidarity is not altruism.  Altruism is supposedly selfless giving requiring sacrifice but expecting no reward—except perhaps praise for being saint-like.  Solidarity recognizes the commonality of our conditions and expects to receive support by right as well as give it.

Solidarity is not family.  Families—and by extension surrogate families like clans, nations, religions, races and others—are expected to support their members out of blood obligation.  Solidarity demands respect for commonality with the other.  Solidarity with the stranger dismantles walls and promotes peace instead of a mad scramble over scarce resources.

Solidarity is not utopian.  Utopians conjure up sweet dreams of the perfect.  Utopians may simply drift on in the opium cloud of that dream. More dangerously, some utopians construct rigid ideologies around their vision which eventually require the ruthless suppression of anything and anyone not in conformity to that ideology.  Solidarity is rooted in the common realities we face together and is interested in addressing the roots of the problems as well as ameliorating the immediate effects.

Solidarity is not all warm and fuzzy.  Warm and fuzzy denies oppression.  Solidarity recognizes that there are those whose own narrow self-interest causes them to exploit, subjugate, and abuse others.  And solidarity demands common action to defend against such depredations and—yes—boldly to ultimately defeat the oppressors.

Solidarity is a recognition of our place in humanity, an ethic, and an active response to our common interests. 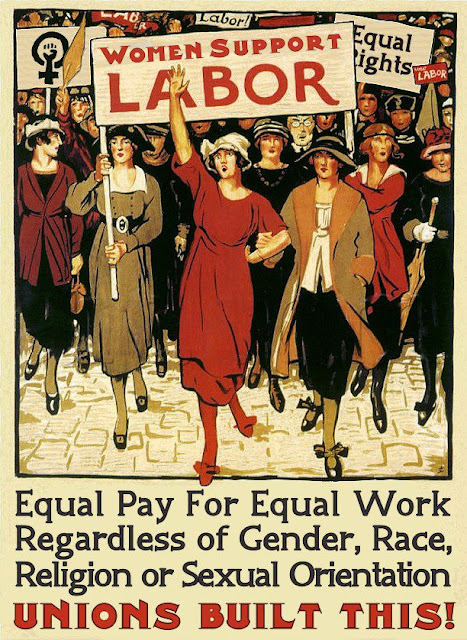 Solidarity recognizes that justice requires cooperation and effort across all boundaries of separation.

Solidarity enlarges our communities, builds bridges of respect that can span differences.  It does not demand lock-step conformity to some ideological purity to act together in mutual support.  It requires listening, really listening and not just waiting our turn to deliver a lecture.  When generations of feminists support Hillary Clinton passionately it means not sneering that they are voting their vaginas, but understanding why and ultimately standing with them just as we hope that they will stand with us for the dismantlement of corporate power.

Solidarity requires humility and taking the risk of having our fragile identities challenged.  We cannot give more than lip service to Black Lives Matter unless we understand and take ownership of the White privilege understanding it is not a moral flaw but a condition we are born to.  By breaking down our defenses we can collaborate in our mutual liberation with respect and understanding. 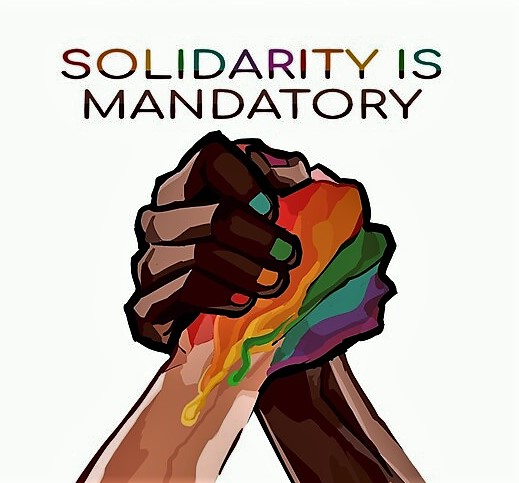 Most of all, solidarity requires commitment and action.  There are no sidelines, no room for mere cheerleaders.  Each and every one of us are called to put our bodies and our lives on the line again and again in some meaningful ways.  And we are buoyed by the knowledge that others are prepared to do the same for us.

Can we make a promise this Labor Day to commit to the working class virtue of solidarity?  Can we face the challenges not just of the coming elections, but in defending women’s bodies and choice, dismantlement the new slavery of mass incarceration, and standing in the Spirit Camp of the Standing Rock Sioux as they defend all of our water.  There is a lot to do.  No individual can do it all. But we can all do something. 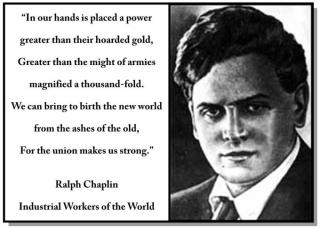 In the words of Ralph Chaplin in the great anthem of the Working Class:

In our hands is placed a power greater than their hoarded gold;

Greater than the might of armies, magnified a thousand-fold.

We can bring to birth a new world from the ashes of the old,

For the Union makes us strong!

Posted by Patrick Murfin at 5:01 AM