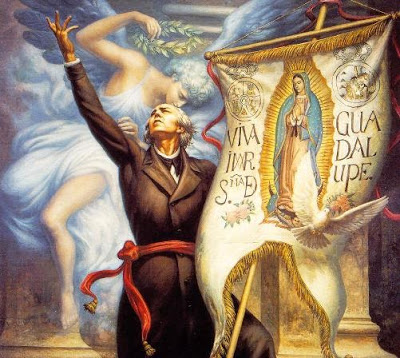 Revolution and religion mix in this homage to Padre Miguel Hidalgo with the banner of the Virgen de Guadalupe and an angel bending to kiss his brow.

Note:  Versions of this have run previously in this blog, I’m posting it again as a public service.  Mexico has a real history and tradition that is deeper than a taco and tequila festival favored by Gringos.

Quick, what’s Mexican Independence Day?  If you answered Cinco de Mayo, you’d be wrong.  That is a minor provincial holiday in Mexico that has become a celebration of Mexican pride in the United States.  It celebrates the victory of the Mexican Army over the French Empire at the Battle of Puebla in 1862, during the French invasion of Mexico.  The correct answer is Diez y Seis de Septiembre—September 16—which commemorates El Grito de Delores, the rallying cry which set off a Mexican revolution against Spanish colonial rule and the caste of native born Spaniards who ran roughshod over the people in 1810.

Early in the morning of that fateful day Padre Miguel Hidalgo y Costilla, a respected priest and champion of the Mestizos—mixed Spanish and Indian blood—and the Indios.  Both classes were held in virtual serfdom by a system in which native born Spaniards—Gachupines—held ruthless sway.  Hidalgo had for sometime been part of a plot by Criollos to stage a coup d’état by Mexican born Spaniards who were the middling level officers and administers of the system.

The Criollo plot was to take advantage of resentment of the imposition of Joseph Bonaparte on the Spanish throne by Napoleon to declare Mexican independence within a Spanish Empire under Ferdinand VII, considered by the Spanish people as the legitimate heir to the throne. But Ferdinand was held in France by the Emperor, so if it had succeeded the plot would have created a de-facto republic.  The Gachupines, who had accepted Bonaparte, would be driven out of Mexico.

Plotters decided on a date in December to stage their coup.  In the meantime they were quietly trying to line up the support of Criollo officers and by extension the Army.  But the plot was betrayed and orders were sent out to arrest the leaders, including Hidalgo.

The wife of Miguel Domínguez, Corregidor of Queretaro (chief administrative official of the city of Queretaro) and a leader of the plot, learned of the pending arrests and sent a warning to Hidalgo in the village of Delores near the city of Guanajuato, about 230 miles northwest of the capital of the Viceroyalty of New Spain, Mexico City. The late in the evening of September 15, Hidalgo asked Ignacio Allende, the Criollo officer who had brought the warning, to arrest all of the Gachupines in the city.

It was apparent to Hidalgo and Allende that the Criollos had not had time to solidify their support in the army, and indeed that many Criollo officers refused to join.  The revolution would inevitably be crushed.  Sometime in the early morning hours of September 16, Hidalgo made a fateful decision—he would call on the mestizo and Indio masses to rise up.

At about 6 A.M.  Hidalgo assembled the people of the pueblo by tolling the church bell.  When they were together he made this appeal, which he had hastily drafted:

My children: a new dispensation comes to us today. Will you receive it? Will you free yourselves? Will you recover the lands stolen by three hundred years ago from your forefathers by the hated Spaniards? We must act at once… Will you defend your religion and your rights as true patriots? Long live our Lady of Guadalupe! Death to bad government! Death to the Gachupines!

This is the famous Grito de Delores which sparked the revolt.  Runners went out to nearby towns carrying the message.  The long oppressed people flocked to the cause armed with knives, machetes, homemade spears, farm implements, and what few fire arms that they could take from the Gachupines. 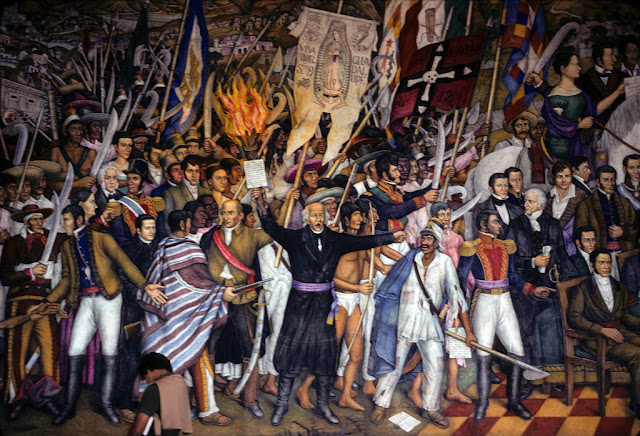 Indios, Meztizos, and Criollos on the march in this mural by Juan O'Gorman.

With Hidalgo and Allende at their head, the peasants began the march to Mexico City.  Along the way they acquired an icon of the Virgin of Guadalupe—Mary depicted as a dark skinned Indian—which became the banner of the revolt.

The first major battle of the war began at Guanajuato, a substantial provincial town, on September 28.  Local officials rounded up the Gachupines and loyal Criollos and their families and made a stand in the town’s fortified granary.  Hundreds of peasants were killed in wild frontal assaults on the position until rocks thrown from above caused the collapse of the granary roof, injuring many.  When a civil official ran up a white flag of surrender, the garrison commander countermanded the order and opened fire on the native forces coming forward to accept it.  Scores were killed.  After that there was no quarter.  With the exception of a few women and children, the 400 occupants of the granary were massacred.  Then the town was pillaged and looted, with Criollo homes faring no better than the native Spaniards. The siege of the fortified granary during the Battle of Guanajuato.

Of course Hidalgo had unleashed an unmanageable and ferocious anger among the people.  Along the march any Gachupines unfortunate enough to fall into the hands of the rebels were brutally killed, as were any Criollos who sided with them—or were simply assumed to be European born.  The revolt was not just a national one—it was a virtual slave revolt with all of the attendant horror that implied. 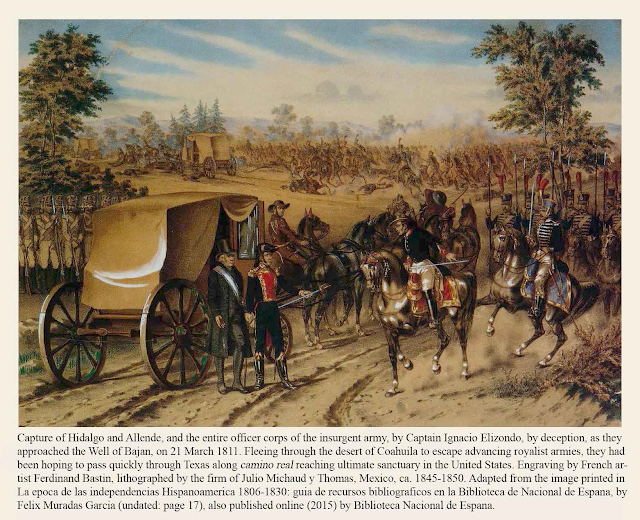 Hidalgo, Allende, and almost the entire revolutionary officer corps were trapped and arrested in March 1811.

It took 11 years of war to finally oust the Spaniards. A triumphant revolutionary army finally entered Mexico City on September 28, 1821, issued an official Declaration of the Independence of Mexican Empire, and established a government of imperial regency under Agustín de Iturbide.

But Mexicans mark the beginning of the struggle—the Grito de Delores—as the true anniversary of independence. 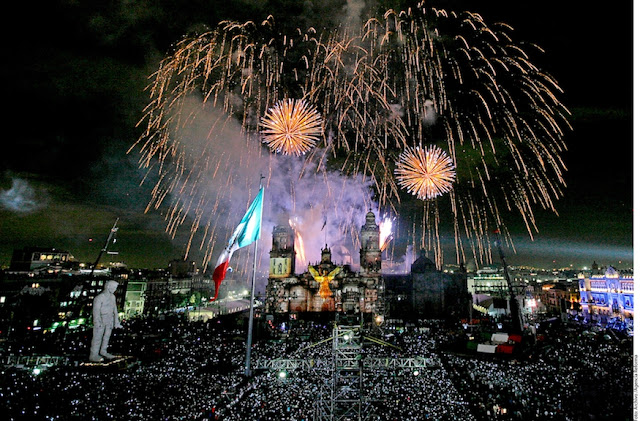 Huge crowds throng Mexico City each year for the pageantry and celebration of Independence Day including spectacular fireworks.

Eventually the church bell from Delores was brought to the capital.  Each year on the night of September 15, the President of Mexico rings the bell at the National Palace and repeats a Grito Mexicano based upon the Grito de Dolores from the balcony of the palace to the hundreds of thousands assembled in the Plaza de la Constitución.  At dawn on September 16 a military parade starts in the Plaza passes the Hidalgo Memorial and proceeds down the Paseo de la Reforma, the city’s main boulevard.  Similar celebrations are held in cities and towns across Mexico.