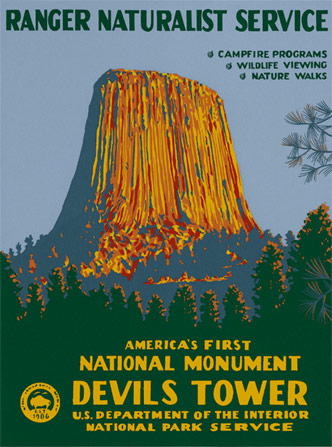 My old home state of Wyoming has a lot of memorable, iconic sights—the Yellowstone geyser Old Faithful, the front range of the Grand Tetons, Independence Rock on the old Oregon Trail.  But nothing is more unusual or more recognized than the formation that looks like a giant tree stump rising high above the winding Belle Fouche River in a remote corner of the state—Devils Tower.

After 10 years of futile efforts by the Wyoming Congressional delegation to have a much larger area including the formation declared a National Park on September 24, 1906 President Theodore Roosevelt, proclaimed Devils Tower a National Monument. It was the first ever use of that designation.  Only 1,152.91 acres of the originally proposed park were protected.

Two years later the rest of the abortive park in the drainage, including the nearby Little Missouri Buttes, were opened for public use—a victory for both timber interests and cattlemen seeking yet more open range grazing.

No one is exactly sure when the imposing feature was first seen by Whites.  Likely early trappers caught a glimpse, but accounts have not been found.  In 1857 Lt. G. K. Warren’s expedition to reach the Black Hills from Ft. Laramie was turned away from the area by a large party of hostile Lakota.  Warren’s log mentions seeing the Bear Lodge—one of several indigenous names for the rock—and the Little Missouri Buttes in the distance through a powerful telescope.  But some scholars believe, because he did not remark on its unusual configuration, that he was probably referring the Bear Lodge Mountains also nearby.

On July 20, 1859 topographer J. T. Hutton and Sioux scout Zephyr Recontre reached the formation.  They were a small party from the larger Capt. W. F. Raynolds Yellowstone Expedition.  But once again neither Hutton nor Raynolds left a detailed account. 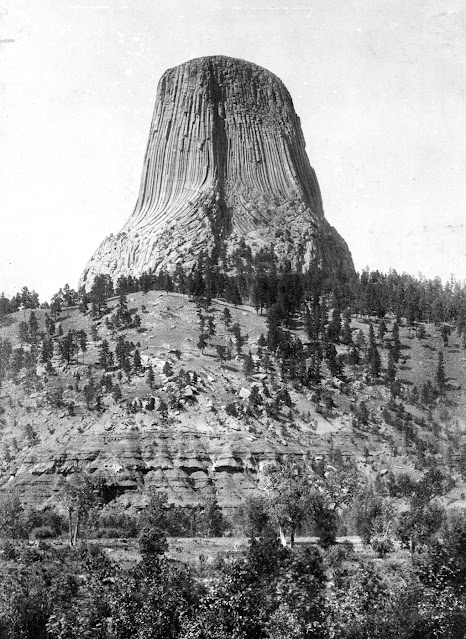 A 1900 photograph of Devil's Tower.  Few visitors came to the remote location far from rail lines and improved roads of any kind.  Most visitors packed in by horse and mule for days to see the marvel.

It wasn’t until 1875 that a U.S. Geological Survey expedition and its military escort under Col. Richard I. Dodge the formation was studied and described in detail.  Expedition member Henry Newt wrote:

Its remarkable structure, its symmetry, and its prominence made it an unfailing object of wonder. . . It is a great remarkable obelisk of trachyte, with a columnar structure, giving it a vertically striated appearance, and it rises 625 feet almost perpendicular, from its base. Its summit is so entirely inaccessible that the energetic explorer, to whom the ascent of an ordinarily difficult crag is but a pleasant pastime, standing at its base could only look upward in despair of ever planting his feet on the top.

Dodge was credited with giving the formation its now familiar English name.  As was so often the case, it came from a misunderstanding about a native name.  An interpreter mistranslated one of the native names—most of which were some variation of Bear’s Lodge in several different Plains tribe tongues—to Bad God’s Tower.  Expedition members converted this to “Devil’s Tower.”  Following standard topographical practice, the apostrophe was dropped from the official name given the formation.  We can be fairly certain that the translation somehow went awry because none of the many native legends associated with the rock have anything remotely to do with a “bad god.”

Of course, Native tribes had been aware of the Tower.  It was considered magical or sacred by many tribes—in addition to the Lakota and other Sioux the Arapaho, Cheyenne, Crow, and Kiowa.  The Lakota, the dominant tribe in the area since their arrival from the area around the headwaters of the Mississippi in the late 18th Century and spectacularly successful adoption of the horse centered Plains Indian culture, regarded the Bear Lodge—Matho Thípila—as a sacred location second only to the Black Hills.

The various tribes have different origin stories for the great rock and many associations with mythic figures or great heroes.  Many used the Tower as the site of individual cleansing rituals, group spiritual practice such as the Sun Dance and Sweat Lodge purifications, and as a sacred burial ground for heroes and great shamans.  The Lakota associated it with one of their most sacred objects, the White Buffalo Pipe, a gift of White Buffalo Woman, a great spiritual mythic or semi-mythic presence.

Of several origin stories from various tribes, the Park Service has heavily promoted the somewhat dubious Bear Legend connecting the tower to the Pleiades star formation--a Lakota tale grafted to stories of European origin.  This painting is on display at the visitor's center and is regularly used in Park Service literature.

Among the many legends associated with the tower, the National Park Service, custodians of the Monument, heavily promoted one story in their literature.  In this tale, shared in slightly different forms by the Kiowa and Lakota, seven Indian girls were playing or gathering food near the river when a giant bear attacked them.  The girls fled and ran to a large stump.  They jumped on it and began to pray to the Great Spirit (this language is a tip-off that the story has been laundered through Whites and not collected directly from the people) for help.  Hearing their prayers, he began to raise the stump to the heavens.  As it grew and grew, the enormous Bear tried to climb the stump leaving his claw marks on the side and littering the base with the shredded bark.  The Bear could not reach the girls and went away.  But by then the stump had grown so high that the girls could not climb down.  Taking pity on their plight, the Great Spirit transformed the girls into seven stars directly above the tower, stars known to Europeans as the Pleiades.  It is difficult to tell know exactly how much of this popular story—I was entranced with it as boy—came from authentic tradition, and how much grafted from similar tales in Western mythology. 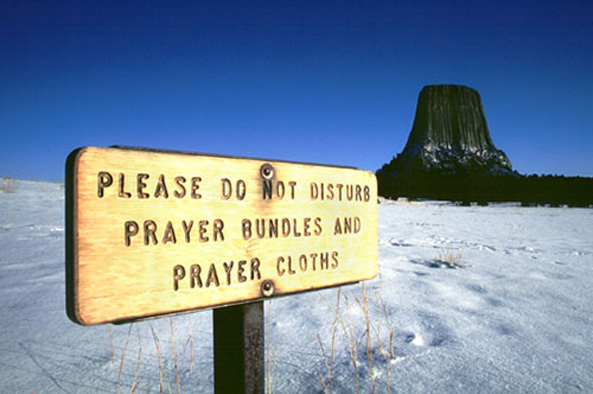 Standing in a spring snow, this Park Service Sign warns visitors to leave Native sacred objects alone.  Despite the admonition tourists steal or attempt to steal objects as souvenirs.

Today members of several tribes continue to hold ritual observances at the Tower, although burials are now forbidden by the Park Service.

It is also a popular tourist attraction, although it takes a fairly determined tourist to get there.  Located hours away from the nearest attractions in the Black Hills, far from any town of even modest size, well away from major highways, most visitors have to dedicate an entire day to seeing just this one sight.  There is only one café at road junction miles away and a Park Service concession stand on site for food.  There are a couple of 1950’s style motels nearby, a couple of dude ranches in the area, and camping at Monument. 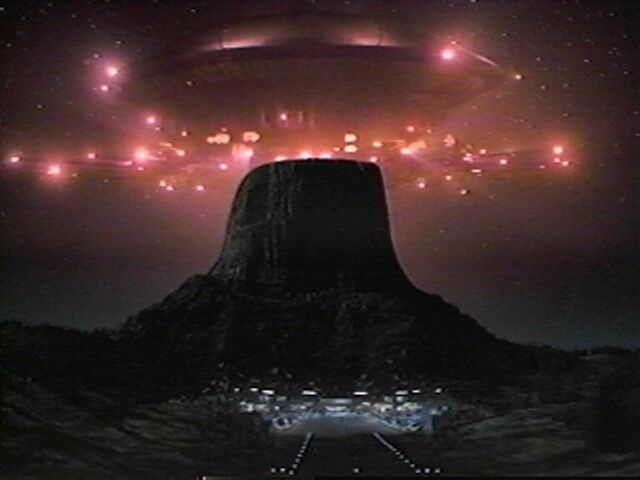 Yet people come.  Visits took a dramatic jump when Steven Spielberg featured the Tower as the alien landing spot in Close Encounters of the Third Kind.  And it has become a Mecca for the growing sport of rock climbing.  Hundreds make the climb every season, as many as a dozen a day, using several well established routes to the top on every side.

Native tribes, for home the site is sacred, objected to any climbing.  White climbers and the tribes were at odds for years until the Park Service brokered a “voluntary” compromise.  Since most tribes hold their holiest ceremonies at the Tower in June, the Park Service asked climbers to voluntarily refrain from ascending the rock in that month.  They estimate that 85% of climbers honor that agreement.  But authorities are powerless to stop those who do not.  And a climbing group and local tourist interests have sued the Park Service for even suggesting self-restraint. 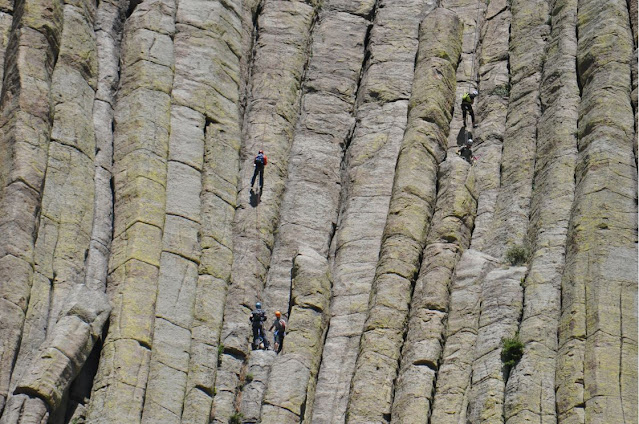 On a nice summer day dozens of parties can be seen ascending the tower.  Here two groups are rappelling down from the top.

I visited Devils Tower several times as a boy.  A years ago, when my two oldest daughters were still children my wife and I made the long trip from the Black Hills to show it to them.  It was one of the few natural wonders that they saw on that Western trip that actually impressed them.  They even managed to hike the trail that encircles the rock, quite an achievement for kids allergic to walking.

Posted by Patrick Murfin at 6:23 AM