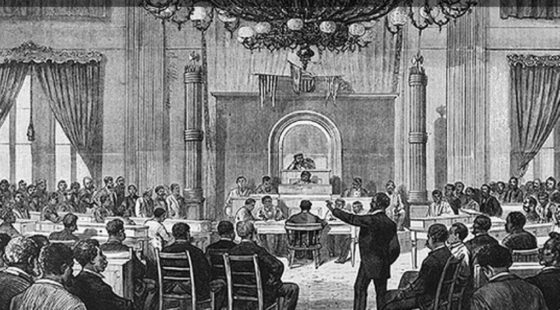 As ever, it was hard—dangerous and hard—to be Black in early 19th Century America for Freemen as well as for slaves.  Take the Northern state of Ohio, for instance.  It had entered the Union in 1803 under an 1802 constitution that abolished slavery.  Although technically a Free State, Ohio was culturally Southern having been settled predominantly by frontiersmen moving west from Virginia and the Carolina through Tennessee and Kentucky before, during, and after the American Revolution and the widespread Indian wars that followed.  This was especially true of Cincinnati, which rapidly became the busiest port on the Ohio River.

Farming in Ohio was not naturally suited to the plantation system which relied on large numbers of slave laborers, so the ban on slavery mostly affected those in domestic service or hired out by their masters as laborers, craftsmen, and river men.  It was not a huge economic loss to forgo them and in actuality most masters effectively kept their personal servants in virtual bondage for their lifetimes.  But the white citizens were fearful that as a free state Ohio would become a magnet for free Blacks and for escaped slaves who would compete for wages and land.  Thus in 1807 the state enacted strict Black laws.

Similar to laws passed in border and other Northern States like Illinois, the 1807 act was meant to discourage migration to the state by requiring Blacks to prove that they were not slaves and to find at least two people who would guarantee a surety of $500—a prohibitive fortune worth years of income to small farmers, craftsmen, or merchants who might employ them—for their good behavior. The laws also banned marriage to Whites and forbad gun-ownership in a region where hunting was an important source of food, regulated occupations, and imposed numerous petty restrictions.  Needless to say, the rights and privileges of citizenship were denied to any Blacks who could jump through all of the hoops.

In the early years of the century, the Black laws did discourage migration.  But it never eliminated it.  As circumstances and economic realities changed enforcement became lax, then spotty, and finally rare.  Part of that was due to a major shift in the population.  The threat of Indian warfare finally ended after the War of 1812 and the British evacuation of Ft. Detroit and the end of sponsorship of hostile tribes and helped open up the mostly unsettled northern half of the State.  That accelerated greatly after the opening of the Erie Canal in 1825 made Lake Erie a major route to the West.  Most of the new settlers were decedents of the New England diaspora by way of New Hampshire, Vermont, and Up State New York.  These Yankees were in general anti-slavery and their influx was changing the political balance in the state.

But more importantly, the introduction of practical steamboats on the Ohio River created a boom in the trade on the river.  The larger steamboats required larger crews, especially deck hands and boiler stokers, as well as armies of dock laborers, warehousemen, and teamsters.

A sketch of early steamboats and warehouses in bustling Cincinnati circa 1830 when Free Blacks were competing for jobs with White laborers.


Cincinnati and other river ports had no choice but to use Free Black labor or be undercut by the slave labor used at Virginia and Kentucky river towns like Wheeling or Louisville.  By the late 1820 the Queen City had a large Free Black population.   White laborers became increasingly resentful of competition from Blacks which undercut wages.  Under pressure, Cincinnati began to try to apply the long dormant Black Laws on local Freemen.  When that was not effective in driving out the population major rioting against Blacks broke out in July and August of 1829.  After bloody rampages and the burning of Black neighborhoods, churches, schools, and businesses 1200 Blacks were driven from the city and many resettled in Canada.  Not only were casual laborers affected, but a small but growing elite of Black businessmen and skilled craftsmen was devastated.  Many appealed to other Black communities, especially well established centers like Philadelphia and Baltimore, for financial assistance for re-location schemes to Canada.

Eventually a Baltimore Free Black leader and activist, Hezekiah Grice issued an appeal to major communities to a national meeting to plan assistance for a major Canadian resettlement.  He argued that the U.S. would never be safe for Blacks and noted that there were already communities of former slaves who were freed during the American Revolution by the British and evacuated to the North along with Tories after the war.  A small number of escaped slaves were trickling into British North America as well, a number that would grow exponentially with the regular establishment of the Underground Railroad.

Grice found an ally, host, and a venue Philadelphia, home to the largest and most sophisticated population of Free Blacks in the U.S. thanks to the Quaker tradition of tolerance and relative proximity to slave states. 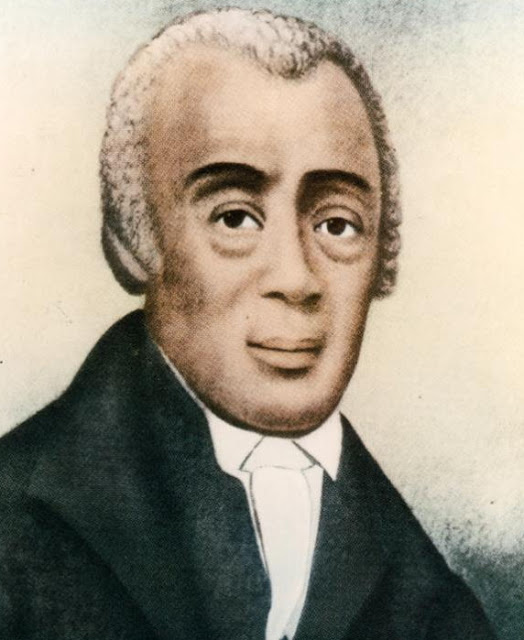 
Bishop Richard Allen was the most important Free Black leader of the first half of the 19th Century.  Born in 1760 as a slave to Benjamin Chew in Philadelphia, Allen and his family were sold to a Delaware Plantation owner.  While in bondage he began to attend Methodist camp revivals and eventually became a lay preacher to his fellow slaves.  As a skilled carpenter Allen was able to purchase the freedom of himself and his family and rode circuit as a saddle bag preacher before relocating to his hometown.  There he was invited to preach for the Black community at St. George’s Methodist Church.  Eventually restrictions on his community, especially segregated seating in the balcony and numerous snubs from White congregants caused him and his people to leave the church and establish their own Methodist community.  After meeting in homes and rental properties, Allen purchased, moved, and physically rebuilt an old blacksmith shop as his first church—the first African-American congregation worshiping in its own building in the country.  Eventually he was regularly ordained as a Methodist minister and his Bethel Church—now revered as Mother Bethel—became the nucleolus of the African Methodist Episcopal Church, the first Black Protestant denomination.  Allen became its presiding Bishop.

But his influence went far beyond his fervent religious activity.  He realized early on that he was de facto the leader of his community.  His first step was to form the Free African Society in 1787 to support community and aid recently manumitted slaves. It offered financial assistance to families and educational services for children or adults seeking employment.   As part of the effort Allen began the first school for Black children and adult literacy and Bible classes at his church.  He also published a Freemen’s newspaper, and numerous pamphlets and tracts on religion, temperance, and Black issues. 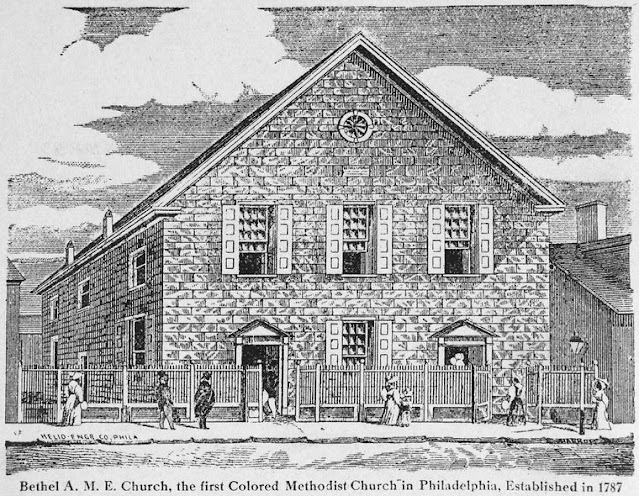 The Bethel AME Church--Mother Bethel--in its second building in which the National Negro Convention met.

A minority were interested in the schemes of the American Colonization Society (ACS) to re-settle Blacks in Africa.  Supported by some well meaning religious folks, mostly Quakers and philanthropists it also drew support from “enlightened” Southern planters in the tradition of Thomas Jefferson who found slavery philosophically irreconcilable with liberty but were terrified by the prospect of freeing “savage and ignorant” slaves who would become violent and prey on White womanhood.  Convinced that Blacks and Whites could never live peacefully forever, shipping them back to their supposed homeland seemed the easiest solution.  Members of the convention recognized that for the virulent racism it represented.  Most of the established Freemen considered themselves culturally American and after generations had no connection at all to Africa.  Moreover the Colonization Society plan disregarded Africa’s ethnic and tribal divisions and the rights of native Africans to their own land.  By the end of the convention the Colonization Society plan would be flatly rejected.

But there was not total unanimity around the Canadian plan, although it was generally popular.  Canada offered a similar culture and climate and a common language—English—they already knew.  And with vast lands available for possible settlement, it seemed amenable and hospitable.  But many delegates were firm for striving for citizenship rights in American, which they considered home.

In the end, the delegates endorsed the Canadian plan and pledged to work towards it, but also decided to advocate more broadly for Freemen in the United States and offer sympathetic support to those still in slavery.  In the U.S. Free Blacks would demonstrate their worthiness for citizenship by undertaking a program of moral up-lift, temperance, strong families, chastity, education, hard work, and building black businesses and institutions.  Although sympathetic to those still in slavery, they took pains to separate and elevate themselves as Freemen.  Their political program was not radical, their method gradual.  It spoke only in general terms of a possible total end to slavery and held out the hope of winning over more sympathetic Whites. 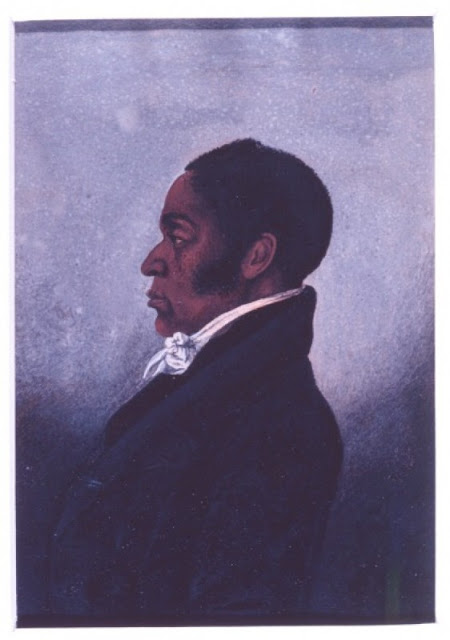 Allen was elected President of a new organization, American Society for Free Persons of Color to follow up on Canadian colonization and other parts of the program.  A second, parallel organization was established to promote dignity, morality, and respectability in the Black community.  American Moral Reform Society, led by Philadelphia businessmen James Forten and William Whipper emphasized temperance and virtue.

Bishop Allen did not long survive the Convention.  He died on March 26, 1831 at the age of 71.  But his work was carried on by others.

The scheme for Canadian resettlement eventually fizzled for lack of resources to promote large scale emigration and the establishment of Black communities.  Many Blacks, who did re-locate, found their welcome far less hospitable than expected and concluded that there was not much difference between White men on either side of the border.  Work turned more to American reform and rights and with the rise of a vigorous, mostly White-led abolitionist movement and the establishment of the Underground Railroad.  By the 1850’s a much more radical generation represented by Fredrick Douglass transformed the movement.

The 1830 Convention was the first of many Black Convention held in the years before the Civil War.  Philadelphia was the most common site, but gatherings were also held in New York City, Baltimore, Pittsburgh, and Cincinnati.  National and state conventions were held almost yearly through 1864 and their proceeding reflected the growing changes and militancy in the Free Black movement.  New organizations were spawned and publications launched.

In 1859 a White newspaper observed, “Colored conventions are almost as frequent as church meeting.”

And it all began in Philadelphia.