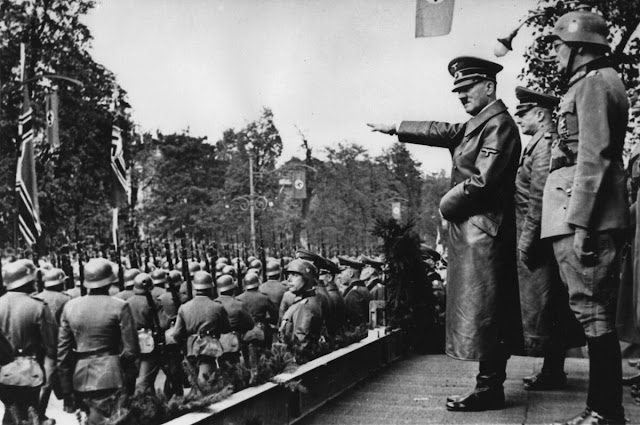 Hitler reviewing his Nazi troops on the way to Poland.

The exact beginning of the greatest cataclysm in history—so far—is harder to pinpoint than you might imagine.  In the early 1930’s Japan and Italy were honing their war skills and adding to their empires with attacks on, respectively, Manchuria and Abyssinia (Ethiopia.)  The Germans and Italians on one side and to a lesser extent the Russians on the other used the Spanish Civil War as a kind of laboratory for modern war.  In 1937 Japan opened up war with China, Throughout the late 1930’s Adolph Hitler continued to blatantly re-arm in pretty much open violation of the Versailles Treaty that ended World War I and used that gathering might to cower Britain and France into acquiescing to aggressive land grabs in the Sudetenland and Czechoslovakia.  All of this was part of the slide into the eventual universal conflagration known as World War II.

Americans are apt to believe the whole thing started on December 7, 1941 when the Japanese bombed Pearl Harbor.  But of course war had raged in Europe and Asia for years.

Open up any text book and you will find an exact date for the beginning of the war—September 1, 1939.  It came just one week after the signing of the Molotov–Ribbentrop Pact, the German and Russian non-aggression pact that also secretly called for the division of Poland. 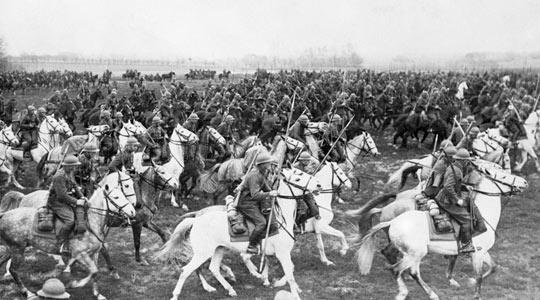 The Poles mobilized as tensions mounted on the border.  The cavalry, the pride of the Polish army, would charge German tanks with their lances when the war started with terrible but predictable results.

On the night of August 31, a small group of German operatives, dressed in Polish uniforms seized the Gleiwitz radio station in Silesia and broadcast a short anti-German message in Polish.

To “prove” that attack was the work of the Poles, Franciszek Honiok, a German Silesian known for sympathizing with the Poles and who had been arrested the previous day by the Gestapo was dressed in a Polish uniform and then killed by lethal injection.  His body was riddled with gunshot wounds, and left at the scene. The corpse was subsequently presented as proof of the attack to the public and press.

The reason for this elaborate but transparent ruse was to provide justification for a German declaration of war against Poland as an act of self-defense and not a violation of international law.  The hope was that the French and British, pledged to the defense of Poland, might be cowed once again and refrain from action.  As early as August 22 with preparation for the invasion of Poland in full swing Hitler told his generals, “I shall give a propaganda reason for starting the war; whether it is plausible or not. The victor will not be asked whether he told the truth.”

On September 1 in a speech to the Reichstag, Hitler cited the Gleiwitz incident and twenty other equally spurious episodes of Polish “aggression” against Germany and ethnic Germans in its territory.  By then the tanks were already rolling.  The long-planned invasion had started across the border shortly after 4 am. 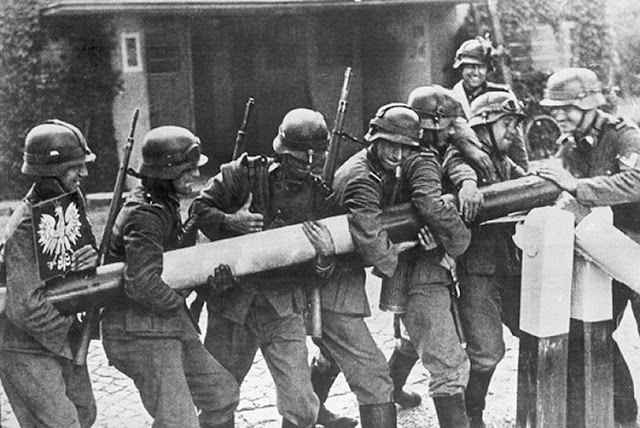 It seemed like a lark—laughing German soldiers take down a Polish border road barricade to begin their invasion....﻿

The Poles, who were partially mobilized as tensions grew, put up as good a defense as possible.  They hoped to hold out long enough for promised British and French intervention.  Despite inferior equipment and numbers, they slowed the highly mechanized German advance in many places.  But they were relatively helpless against German air superiority.  Their whole defense plan collapsed on September 17 when the Russians attacked from the rear. 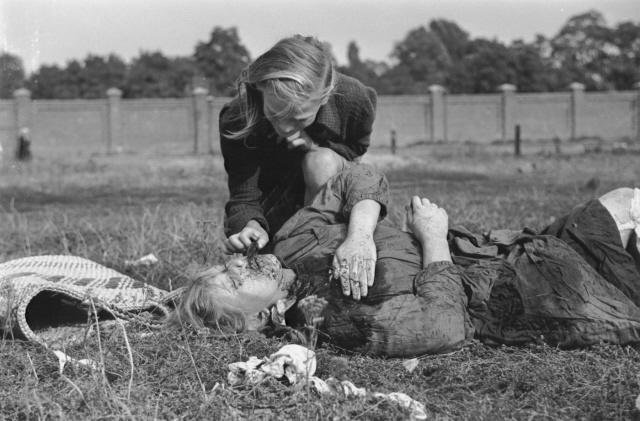 ...and it quickly turns into this.  Ten year old Kazimiera Mika mourns over the body of her sister, sometimes identified as the first casualty of World War II.  She was caught on her way to school by a strafing Luftwaffe airplane.  In reality there were both Poles and Germans killed in border skirmishing even before September 1, 1939.


The Poles managed to get sizable numbers of their troops over the border to neutral Romania, including many officers of the Polish Air Force, before the country was completely overrun on October 6.  Some of these troops and airmen eventually made it to Britain from which they participated as Free Polish forces in the D-Day invasion and French campaign.

On September 3 at 11:15 am British Prime Minister Neville Chamberlain announced on BBC Radio that the deadline of the final British ultimatum for the withdrawal of German troops from Poland expired at 11:00am and that “consequently this nation is at war with Germany”. Australia, India, and New Zealand also declared war on Germany within hours.  The French followed a few hours later.

The British and French began mobilization, but were not ready to materially aid Poland.  And they never extended their declaration of war to the second aggressive party, the Soviet Union.  There followed months of the so called Phony War as the Allies built up forces and dithered in France.  That ended when Hitler shifted his forces from the East and launched his invasion of France on May 10, 1940.  Chamberlain’s government fell and Winston Churchill became British Prime Minister.

There would be no more Phony War. 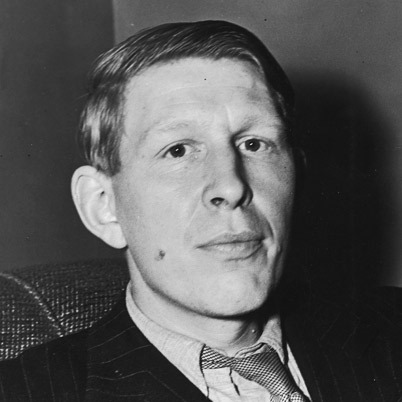 I sit in one of the dives
On Fifty-second Street
Uncertain and afraid
As the clever hopes expire
Of a low dishonest decade:
Waves of anger and fear
Circulate over the bright
And darkened lands of the earth,
Obsessing our private lives;
The unmentionable odour of death
Offends the September night.

Accurate scholarship can
Unearth the whole offence
From Luther until now
That has driven a culture mad,
Find what occurred at Linz,
What huge imago made
A psychopathic god:
I and the public know
What all schoolchildren learn,
Those to whom evil is done
Do evil in return.

Exiled Thucydides knew
All that a speech can say
About Democracy,
And what dictators do,
The elderly rubbish they talk
To an apathetic grave;
Analysed all in his book,
The enlightenment driven away,
The habit-forming pain,
Mismanagement and grief:
We must suffer them all again.

Into this neutral air
Where blind skyscrapers use
Their full height to proclaim
The strength of Collective Man,
Each language pours its vain
Competitive excuse:
But who can live for long
In an euphoric dream;
Out of the mirror they stare,
Imperialism's face
And the international wrong.

Faces along the bar
Cling to their average day:
The lights must never go out,
The music must always play,
All the conventions conspire
To make this fort assume
The furniture of home;
Lest we should see where we are,
Lost in a haunted wood,
Children afraid of the night
Who have never been happy or good.

The windiest militant trash
Important Persons shout
Is not so crude as our wish:
What mad Nijinsky wrote
About Diaghilev
Is true of the normal heart;
For the error bred in the bone
Of each woman and each man
Craves what it cannot have,
Not universal love
But to be loved alone.

From the conservative dark
Into the ethical life
The dense commuters come,
Repeating their morning vow;
'I will be true to the wife,
I'll concentrate more on my work,'
And helpless governors wake
To resume their compulsory game:
Who can release them now,
Who can reach the dead,
Who can speak for the dumb?

All I have is a voice
To undo the folded lie,
The romantic lie in the brain
Of the sensual man-in-the-street
And the lie of Authority
Whose buildings grope the sky:
There is no such thing as the State
And no one exists alone;
Hunger allows no choice
To the citizen or the police;
We must love one another or die.

Defenseless under the night
Our world in stupor lies;
Yet, dotted everywhere,
Ironic points of light
Flash out wherever the Just
Exchange their messages:
May I, composed like them
Of Eros and of dust,
Beleaguered by the same
Negation and despair,
Show an affirming flame. 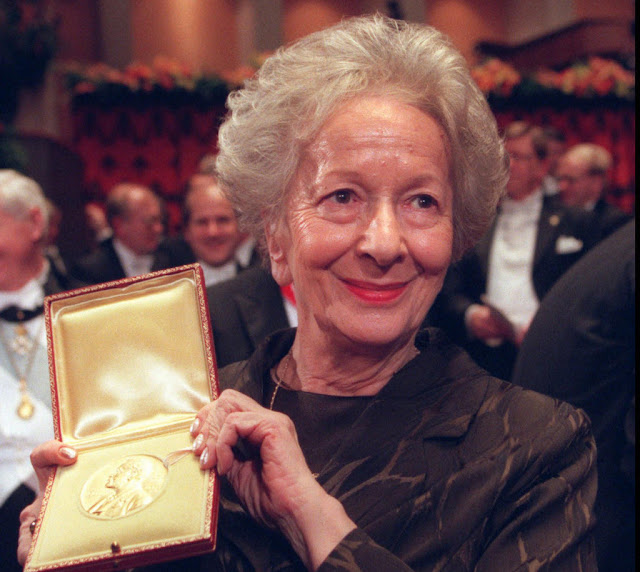 Wislawa Szymborska with her 1996 Nobel Prize.

When the whole bloody mess was finally over Wisława Szymborska, a Nobel Prize winner for Literature mused:

The End and the Beginning