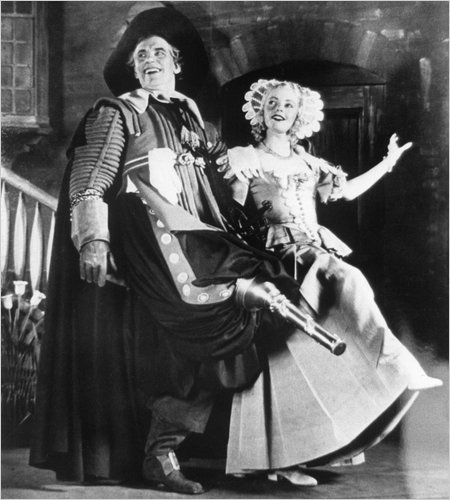 There must be something about September that inspires songwriters.  Other months, of course, get a lot of musical traffic but the transition month between summer and autumn has produced some stunningly memorable tunes often laden with wistfulness and tinged with melancholy.  Several have become standards.  Think of Try to Remember from The Fantasticks, Frank Sinatra’s rendition of September of My Years by Jimmy Van Heusen and Sammy Cahn, or Neal Diamond’s schmaltzy power ballad September Morn.  Lately Green Day’s When September Ends shows signs of similar legs.  You can probably think of others.

But all must bow before the simply titled September Song. Woody Allen called it the best American popular song ever written in the film Radio Days.  That may be a slight exaggeration.  There is plenty of stiff competition for that crown including in my book As Times Go By, Gershwin’s Summertime, Over the Rainbow, and the vaudeville standard I’m Always Chasing Rainbows, but it is definitely a contender.

But it wasn’t always that way.  The song was slow getting out of the starting gate.

You can’t blame the slow start on its impressive pedigree.  Take Pulitzer Prize winning playwright and poet Maxwell Anderson, known for his gritty World War I play What Price Glory, blank verse historical dramas Elizabeth the Queen and Mary of Scotland, and for his roman a clef of the Sacco and Vanzetti case, Winters, for instance.  In 1937 he undertook an ambitious new project—turning Washington Irving’s Father Knickerbocker’s Stories about life in early Dutch colonial Nieuw Amsterdam into a musical.

The play was to be part romantic comedy and part political commentary on what Anderson perceived as creeping corruption in the Roosevelt administration and a tendency in the New Deal toward corporatism and the concentration of power like that which had given rise to fascism, Nazism, and Soviet style communism.  The symbol of that corruption and power mania was to be the tyrannical governor, the one-legged old man, Peter Stuyvesant. 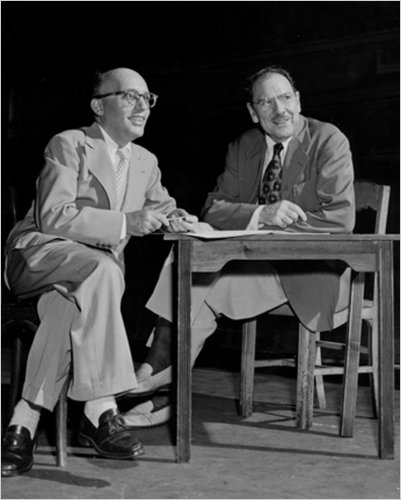 Kurt Weill and Maxwell Anderson during their second collaboration, Lost in the Stars, in 1949.


Anderson wrote the libretto and lyrics.  It was his Anderson’s first foray into musical theater.  For a composer he turned to Kurt Weill, the German Jewish refugee from the Nazis who had gained fame as Bertolt Brecht’s collaborator on Mahogany and The Three Penny Opera. Weill was a fervent anti-fascist and shared with Brecht the belief that theater should be instructive and socially useful.  His sophisticated European sensibilities insured that the music would have a very different feel from that of the most successful American theater composers, Jerome Kern, Irving Berlin, George Gershwin, and Richard Rogers.

In a fanciful twist the play was narrated on stage by Irving, who also acted as a kind of chorus and occasionally interacted with the other characters.  It was set in the Dutch colonial capital on Manhattan Island.  The designated hero was Brom Broeck, a brave and headstrong young man with an allergy to authority, a character trait which Irving often pointed out was uniquely American—a term and idea that did not exist in 1647.  Young Brom loved the fair Tina Tienhoven, daughter of the Burgermeester—master of the corrupt Town Council.  The Council included a venal Roosevelt, an ancestor of the Presidents.  Brom discovered an illegal scheme to sell rum and firearms to the Indian tribes who menaced the Dutch settlements along the Hudson.  Brom was framed by Tina’s father for the crime he tried to expose and sentenced to hang.  He escaped that fate by a clever ruse and was pardoned by the newly arrived Governor, Peter Stuyvesant who admired the Brom’s pluck.

But Stuyvesant turned out to be anything but a hero.  He was high handed and dictatorial, imagining himself as the One Indispensable Man. He immediately set his hand at two goals—to marry the comely Tina himself and to rush the colony to war for his own glory.  That set Brom once again on a path of rebellion.

As envisioned, the play was clearly about Brom and Stuyvesant was a main, but secondary character.  Mounted at the Ethel Barrymore Theater by Playwrights’ Company and directed by Joshua Logan, Burges Meredith, Anderson’s favorite actor and his neighbor in Rockland County on the Hudson was tapped to play Brom.  For Stuyvesant, Anderson and Logan recruited Walter Houston, a stage veteran who had become a Hollywood star in films like Dodsworth, Abraham Lincoln, and Rain.  He is best remembered today as the father of director John Huston, as James Cagney’s father in Yankee Doodle Dandy, and the grizzled prospector in The Treasure of Sierra Madre.

As a condition for taking the part Huston requested a solo of his own—he only slated to appear in ensemble numbers.  Since he was a key marquee name, Anderson and Weill quickly agreed and dashed off September Song—the melancholy plea of an old man for a young love—almost as a throw away.  But it was crafted to Huston’s limited range and gruff voice.  In a departure from tradition, the actor would half speak, half sing the song.

But it disrupted the balance of the play.  It immediately made Stuyvesant, seen originally as a villain into a more complex and sympatric character.  Anderson made adjustments to the script accordingly.  That upset Meredith who felt his role was undermined and who withdrew from the play during tryouts.  He was replaced by Richard Kollmar who became best known as a radio actor and personality who was married to columnist and What’s My Line panelist Dorothy Kilgallen.

Knickerbocker Holiday opened on Broadway on October 19, 1938 to generally favorable reviews—although some reviewers were harshly critical of the anti-Roosevelt subtext just as Europe was gearing up for war and real fascism was on the march.  It was moderately successful at the box office running for 168 performances and closing on March 11, 1939.  When it closed, none of the show’s songs, including September Song had broken out as a recording or radio hit.  Everyone expected the show and song to quickly slip from memory.

Huston did record the song in 1938, but it did not sell.  In 1943 Bing Crosby, who seemingly recorded everything released the song.  His adaptation, used as the basis for most subsequent versions altered the lyrics somewhat removing or changing lines that reflected specific plot points in the play.  Three years later Frank Sinatra recorded it for the first of three times.  But neither of these versions was a hit. 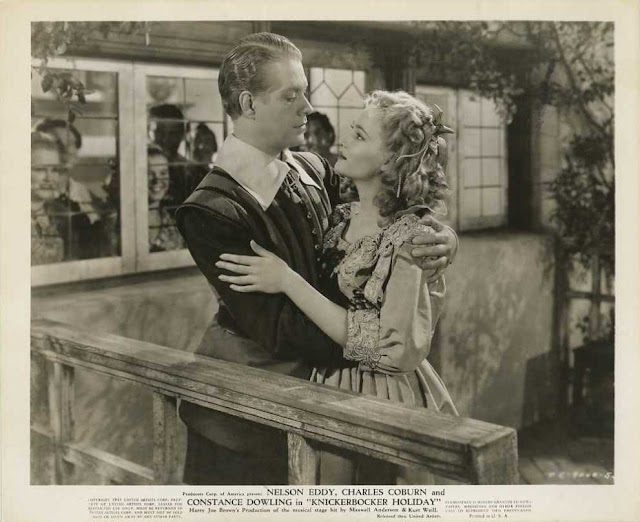 Nelson Eddy's screen version swung the story back to the impetuous romantic lead.  And he got to sing the most memorable song after Charles Coburn gave it brief voice.


In 1944 aging operetta star Nelson Eddy fronted an independently produced film version that was released by United Artists in which he played the dashing romantic lead. His star power, such as it was, shifted the focus of the film version back to Brom.  Veteran character actor Charles Coburn—less of a singer than Huston ever was—took on the part of Stuyvesant played more as a lecherous comic foil.  Much of Weill’s music was jettisoned to be replaced by a committee of studio tunesmiths and Eddy actually had a hand in writing some of the new lyrics.  But September Song remained—spoken a bit by Coburn, and then reprised by Eddy.  The film failed to make much of an impression at the box office and is rarely seen today.

Then in 1950 Huston’s recording was resurrected for the sound track of the film September Affair, a tear-jerking romance starring Joan Fontaine and Joseph Cotton.  The film is little remembered today, but Huston’s twelve year old recording was re-released and became a surprise #1 hit on the Billboard charts. 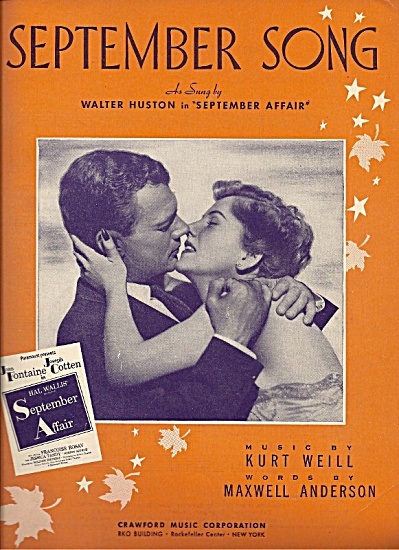 Walter Huston's old recording was given new life when it was used in the soundtrack of the romantic pot boiler September Affair and became an unexpected #1 hit.


The song struck a deep and resonant note and almost immediately became a standard after its new lease on life.  A veritable avalanche of performers across genres recorded it over the next decades.  Both Sinatra and Crosby revisited it as they aged—Crosby for the last time just a month before his death.   Enzio Pinza and Mario Lanza gave it an operatic treatment.  Billy Eckstine and Nat King Cole adapted it to jazz.  Soul man James Brown did it and Lou Reed gave it an up-tempo punk edge.  It was harmonized by The Four Freshmen, Dion and the Belmonts, The Platters, and The Impressions. 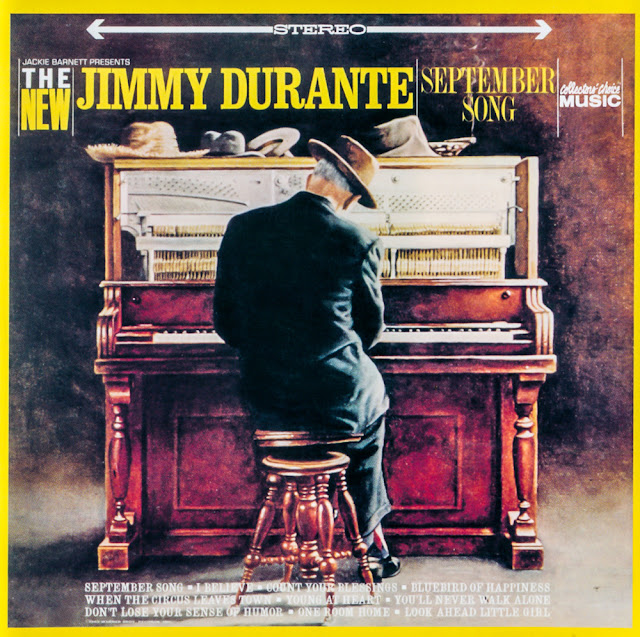 Another sound track this time for the romantic comedy hit Sleepless in Seattle made Jimmy Durante's old raspy version a cult classic.


But two versions stand out among all of the others.  In 1963 Jimmy Durante included the song on an album of pop standards.  When Durante’s songs resurfaced in the ‘90’s in movie sound tracks like Sleepless in Seattle interest in his versions of standards peaked and September Song in particular became a new cult classic.

Perhaps the best of all, however, was Willie Nelson’s flawless and nuanced performance on his 1978 Stardust Memories album.  The single version became a country music hit, but is also a reminder of why Nelson is a great jazz singer. As noted, the Walter Huston version used the original lyrics from the play intact.  Subsequent recording have been based on this setting, although sometimes one or both of the verses are eliminated and the chorus repeated. 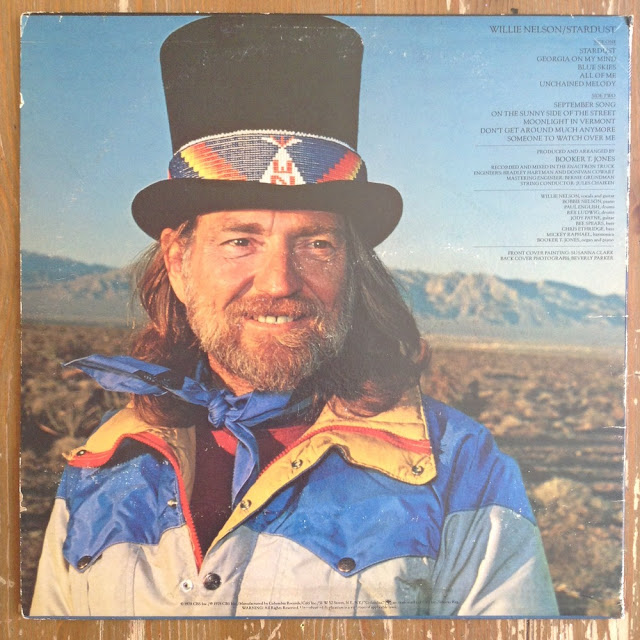 The back cover of Willy Nelson's classic Stardust Memories album which included his version of September Song showed that the country maverick was also a master of jazz phrasing.  A flawless performance.

When I was a young man courting the girls

I played me a waiting game

If a maid refused me with tossing curls

I’d let the old Earth make a couple of whirls

While I plied her with tears in lieu of pearls

And as time came around she came my way

As time came around, she came

Oh, it’s a long long while from May to December

But the days grow short when you reach September

When the autumn weather turns the leaves to flame

And you ain’t got time for waiting game

When days dwindle down to a precious few

And these few golden days I’d share with you

When you meet with the young girls early in the Spring

You court them in song and rhyme

They answer with words and a clover ring

But if you could examine the goods they bring

They have little to offer but the songs they sing

And the plentiful waste of time of day

A plentiful waste of time

Oh, it’s a long, long while from May to December

But the days grow short when you reach September

When the autumn weather turns the leaves to flame

One hasn’t got time for the waiting game

Oh, the days dwindle down to a precious few

And these few precious days I’ll spend with you

These precious days I’ll spend with you