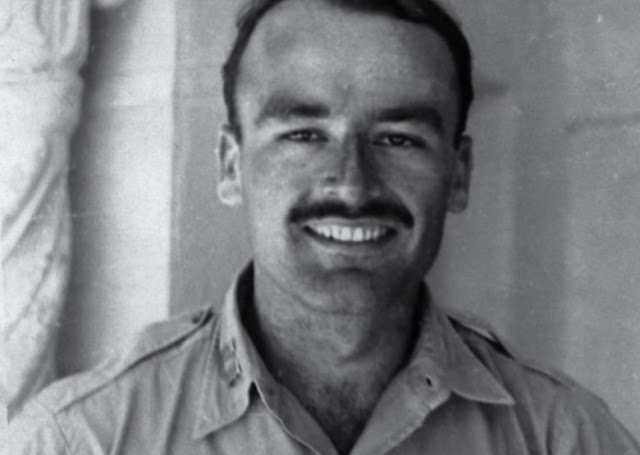 Lt. Col. Albert Dewey cut a dashing figure and had distinguished himself as Office of Strategic Services (OSS) operative behind the lines in France when he got a sensitive assignment to help repatriate Allied prisoners of war (POW) in Indochina in September of 1945.  He was considered perfect for the job because he spoke flawless, perfect French and had the kind of idealistic democratic zeal common to the OSS—the predecessor to the Central Intelligence Agency (CIA) during World War II.  Within weeks, on September 26 he became the first American fatal casualty in Vietnam killed in a case of mistaken identity by Viet Minh troops he was sympathetic to.

Albert Peter Dewey was born in Chicago on October 8, 1916 into a distinguished family with important connections.  His father was a banker who served in the Navy World War I, served as Assistant Secretary of the Treasury under Andrew Mellon, served as a financial adviser to the Polish Government and director of the Bank of Poland, and was elected as a Republican to Congress in 1940.  His father was a cousin of Spanish American War hero Admiral George Dewey and the family was also related to New York Governor and Presidential candidate Thomas E. Dewey.  His mother, Marie Suzette de Marigny Hall, was descended from a distinguished Louisiana Creole.

The boy learned French from her as was dually fluent by the time he entered school.  He was educated in Switzerland at the Institut Le Rosey, before attending at St. Paul’s School in Concord, New Hampshire). He graduated from Yale University—the cradle of many OSS officers, where he studied French history and was a member of the Berzelius Secret Society with other well connected students.  Later, Dewey also attended the University of Virginia School of Law.

After graduation from Yale in 1939, Dewey became a journalist for the Chicago Daily News, the leading liberal and Democratic competitor of the staunchly Republican Chicago Tribune in its Paris bureau.

In Paris Dewey reported on the German invasion of France for the Daily News.  But he could not resist getting personally involved in the struggle against the Nazis.  He enlisted as a lieutenant in the Polish Military Ambulance Corps with the Free Polish Army in France. Enlisting in the medical service protected him from possible prosecution for violating the U.S. Neutrality Act by being a combatant. Following the defeat of the French army, Dewey made a daring escape through Spain to Portugal, where he was interned for a short time.

Back in the U.S. he worked for family friend Nelson Rockefeller in the Office of the Coordinator of Inter-American Affairs as part for Franklin Roosevelt’s Good Neighbor Policy meant to discourage German and Japanese influence in Latin America.   Rockefeller once sent him to meet secretly with General Charles de Gaulle.

General William “Wild Bill” Donovan the creator and commander of the OSS recruited Dewey from his oft-tapped pool of Yale alums.  On August 10, 1944, Dewey parachuted into southern France as the leader of a 10-man OSS team which operated behind the lines for six weeks transmitting intelligence reports on German troop movements. For his service, General Donovan personally awarded him the Legion of Merit and the French gave him the Legion of Honor and a second Croix de Guerre.

Rather than further service in Europe or Latin America Donovan had other plans for his young hero.

As the war was drawing to a close the OSS turned its attention to the post-war world.  The organization operated with remarkable autonomy from the War Department, State Department, and even the President.  It saw that American interests and the interests of its Allies would diverge and even clash.  Nowhere was this truer than in Asia and the Pacific.  The British, French, and Dutch hoped to quickly re-establish colonial rule when the Japanese were defeated and expelled but nationalism and anti-colonialism had spread in the occupied areas.  The OSS had supported and supplied guerilla resistance led by local forces who expected independence.  That was especially true in Indo-China where they had worked closely with Ho Chi Minh’s Viet Minh insurgency.

The OSS considered the Viet Minh to be essentially nationalist and democratic although it recognized that Ho and other leaders had Communist connections.  That didn’t bother the agency which had worked with Resistance groups throughout Europe that included Communists and socialists.  In Asia the assessment was that re-establishing colonial rule by war weakened and weary imperialist powers was ultimately untenable.  In Vietnam it looked to the Viet Minh to establish a republic that would be pro-Western or at least neutral.  It counted on ancient Vietnamese hostility to Chinese encroachment to check advances there if the People’s Army ousted Chang Kai Shek’s ruling Kuomintang.

The OSS worked closely with Ho to help it quickly move to assume power before the French could effectively return.  In the north, for example OSS sent in Deer Team, commanded by Maj. Allison Thomas, who parachuted into the Viet Minh base area to train them for operations against the Japanese. When Thomas and his team arrived in late July, they were greeted by a large banner proclaiming, “Welcome to Our American Friends.” With the tone for their work set, the Deer Team went about training the Viet Minh in the proper use of bazookas, carbines, and grenades. Before long, a Vietnamese-American Force was born.  Together they marched on Hanoi in August after the A Bomb was dropped on Hiroshima and easily took the city.

With the full support of their American allies the Viet Minh quickly occupied administrative offices and began de-facto rule.  This was validated by an official American Mission led by OSS Capt. Archimedes Patti.  Patti witnessed the first parade of the Viet Minh troops and the first “international” ceremony where the Vietnamese flag was displayed alongside those of the Allies and the new Vietnamese national anthem was played after the Star Spangled Banner.  On September 2, Patti and his team watched as Ho Chi Minh read Vietnam’s Declaration of Independence before a cheering crowd. This apparent U.S. recognition of Ho Chi Minh and Vietnamese independence inflamed French opinion as most colonials had expected the Americans to refuse to deal with this up-start government and help France restore control over the colony.

Dewey’s mission to Saigon was expected to do the same in the South but he found a different situation in the old French colonial capitol.  Already on hand was British General Douglas David Gracey and 20,000 troops from the 20th Indian Regiment, mostly Gurkhas fresh from the long campaign in Burma.  By agreement among the Allies the Douglas was to take temporary control of Vietnam in the South and given wide authority.  He firmly supported the eventual restoration of French rule and was staunchly hostile to the Viet Minh. 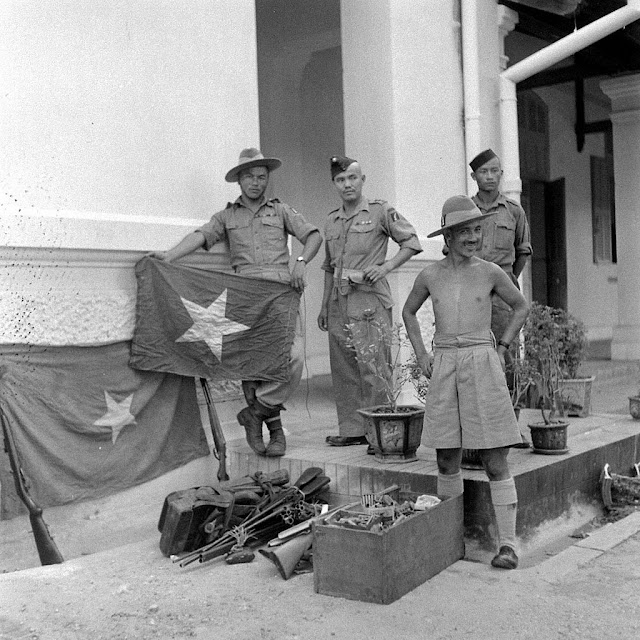 
None-the-less the Viet Minh had already occupied many government offices although there were soon skirmishes between them and the British.  Dewey’s mission was to facilitate the liberation of Prisoners of War.  In direct negotiations with the Viet Minh, he arranged the repatriation of 4,549 Allied POWs, mostly French but including 240 Americans, from two Japanese camps near Saigon.  He also indicated support for the Viet Minh assuming administrative control of Saigon.

This made General Douglas irate.  He declared Dewey persona non grata for ordered his expulsion from the country—an extraordinary slap in the face to an ally albeit one of considerably lower rank.

Douglas was determined to oust the Viet Minh.  His Gurkhas were insufficient in numbers to do the job, so he issued arms to the released French POW and to some of the many French civilians in the city.  As Dewey waited in a hotel to leave the country wide-spread fighting began in the city.  In his last report to OSS Headquarters in Washington.  He wrote “Cochinchina is burning, the French and British are finished here, and we ought to clear out of Southeast Asia.”

As street fighting raged Dewey was finally told he would be evacuated from Tan Son Nhat Airport on September 26.  He requested permission to fly the American flag on his Jeep to identify him knowing that the Viet Minh were only targeting the French and British.  Douglas curtly denies the request saying only generals were permitted by custom to fly national flags on their vehicles.

Dewey made it to the Airport but found that his flight had been delayed or canceled.  On his way back to the hotel he tried to wave past a Viet Minh checkpoint shouting in French that he was American.  That was a fatal mistake.  Assuming he was French the troops fired on his Jeep striking him in the head and killing him instantly.  another OSS officer, Capt. Henry Bluechel, managed to escape on foot. 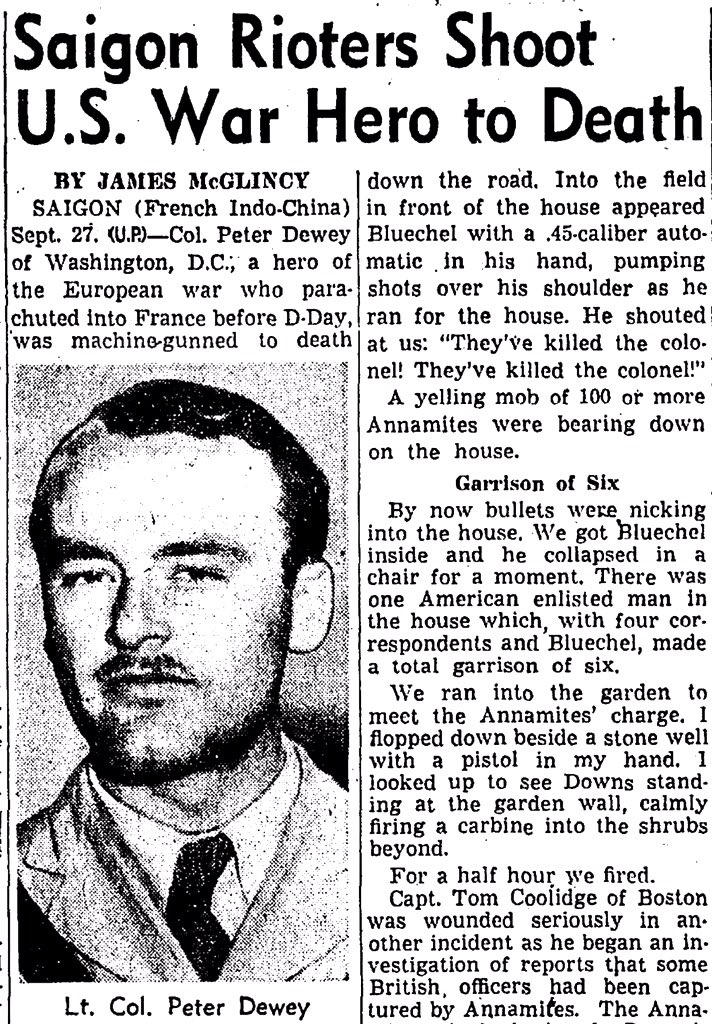 
Upon examining Dewey’s body, the Viet Minh must have quickly discovered that he was an American.  Perhaps in a panic his body was dumped in the river and never recovered.  In Hanoi Ho quickly recognized that the shooting was a disaster.  He sent a letter of condolence about Dewey’s death to President Harry S. Truman.

Meanwhile Douglas was still having trouble asserting control of the city and even armed Japanese troops to join in the campaign.  That further inflamed the Viet Minh and rallied many ordinary Vietnamese to his cause. 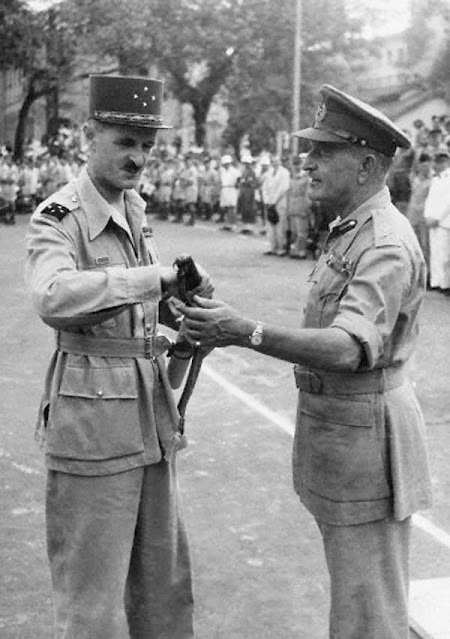 
By December he had some control over the city and staged a welcoming parade and ceremony to honor French General Philippe Leclerc who assumed command in the name of France but advocated for a negotiated settlement.  That advise was rejected, Leclerc relieved of command and died in a plane crash in 1947. The war of independence finally ended after the infamous Battle of Diem Bien Phu in 1954.  Vietnam was divided with Ho Chi Minh in power in the north and a pro-Western monarchy in Saigon—a solution much like that which had been recommended by Leclerc.

With the defeat of France, the U.S. stepped in to shore up the shaky South Vietnamese.  Under the leadership of staunch anti-communist Allen Dulles, the Central Intelligence Agency (CIA) which became the successor to the OSS in 1947, pushed for ever greater involvement into what became the Vietnam War to Americans and conducted operations in country and in neighboring Laos and Cambodia for many years.

If only the U.S. had heeded the stark warning from the first U.S. casualty in Vietnam.

Posted by Patrick Murfin at 8:21 AM