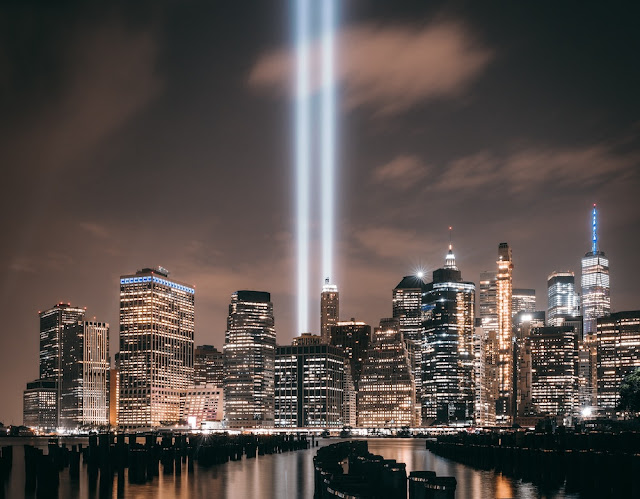 Note—Twenty years after America’s most traumatic experience the memory of the 9/11 attacks is everywhere—news specials and documentaries all over broadcast and cable, newspaper front pages, special commemorative magazines at the grocery check-out, made-for-TV movies, new books both serious and refloating conspiracy theories.  Today there will be live coverage of memorial services at the site of the Twin Towers in New York, at the Pentagon, in a Pennsylvania field, and in cities and towns across the country.  Witnesses, survivors, and family members will be interviewed.  Pundits will try and find meaning and too often echo old, discredited conclusions.  Not just a calendar milestone, the event is made more poignant by the chaotic end the War in Afghanistan that was heedlessly launched in revenge.  Today I share the version of an annual rant and poetry as it appeared one years ago.  It still seems all to apt. 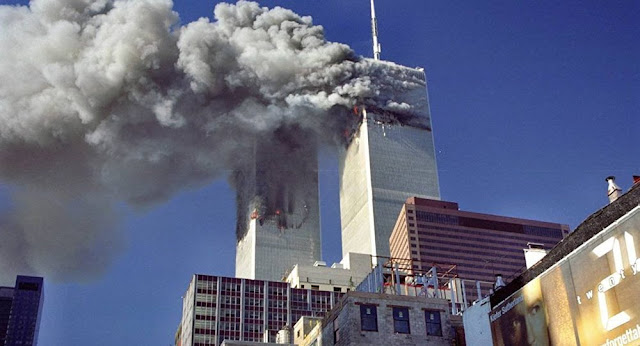 There is no escaping it.  A scab is pulled off a barely healed wound.  Opportunists and con men scramble to once again jump to wrong conclusions, scapegoat strawmen, and bend the occasion to serve their ambitions and blood lust.

I dread it every year.  But it will not leave me or, I suspect, any of us alone.

But as horrible as those images etched indelibly in my mind are, is it wrong to say that I miss the days just after?  Remember?  For a little while Americans loved each other, found comfort in each other’s arms.  Divisions melted.  We were united by grief, and yes, even some righteous anger.  Even the world mourned for us.  Some of us even dared hope that the sense of oneness, community, and solidarity could change us.  Maybe even last.

Of course it didn’t.  Weeks went by and we went charging off in different directions—drumming up wars on people who had nothing to do with the attack, cooking up wild conspiracy theories that confirmed our own personal demons and loathing’s, scapegoating the convenient and the weak, attacking the patriotism of anyone who did not wear a flag pin 24 hours a day.

And now, multiple wars later, a Depression, the election of a Black President then his replacement with a malignant narcissist and common charlatan, the ascent of a kind of political madness, the rise of entitled oligarchy, immigration panic and the rise of fascist White nationalism Americans hate each other.  Really hate.  Can’t stand to talk with each other, be in the same room, breath the same air.  Rage is the order of the day.  White men strut through malls and fast food emporiums with military style weapons slung over their shoulder daring anyone to look cross eyed at them and in their heart of hearts hoping that someone will challenge them.  Looking for any spark to set off a Civil War. 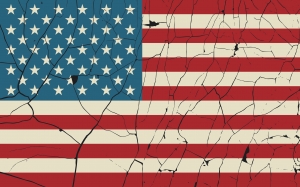 20 years later America is shattered and American despise each other.

Black kids who look like they could be trouble are pumped full of holes with monotonous regularity.  Half-starved immigrant children are torn from their parents, caged, and brutalized. In some churches, mosques, and temples hate thy neighbor is the daily message.  We are sliced and diced apart every which way—by race, language, religion, politics, age, gender, and who we choose to love.

Women and their health have become more than ever political plaything, and the objects of Great Lie campaigns worthy of anything by Goebbels.   Transgender humans have become prey righteous hunters.

We struggle through the Coronavirus pandemic with hundreds of thousands dead due to feckless disregard for human life and simple precautions like wearing masks have become political flash points in which store clerks are murdered for doing their jobs.

So much for my rant.

Looking back, I have grappled with 9/11 in my poetry more than any other single subject.  And how that poetry evolved speaks to what has happened to us. 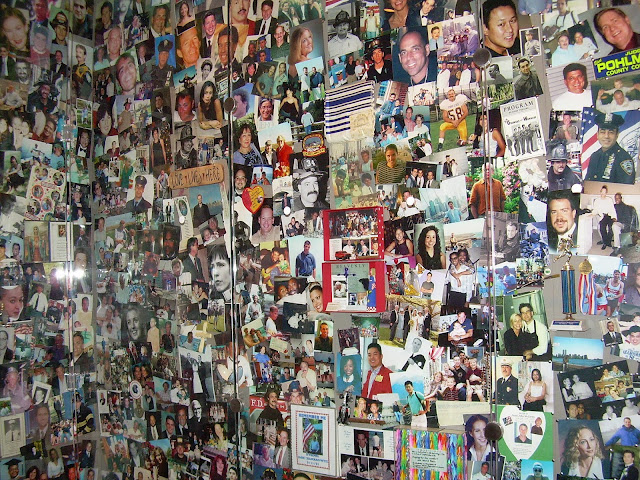 Photos of the dead and missing in New York posted on a makeshift memorial wall.

The first one was written for a one year anniversary program and included in my collection We Build Temples in the Heart in 2004.

The Dead cry out—

It is not lonely here!

They come by the scores

and by the thousands

as they have always come,

a wrenching loss below.

They come as they have always come,

each death the completion of a journey,

the closing of a hoop of life.

And we welcome each of them.

But we are not lonely here.

We do not wander silent corridors

yearning for a voice.

We are not lonely

for we are the Dead

and we are everywhere

united in that last breath

You make haste to fill the unfillable,

to send us more,

out of their own time

as we were out of ours,

yanked here in violence and hatred.

They will come in their own time.

We who know death

do not cry out for revenge.

We are not lonely here. 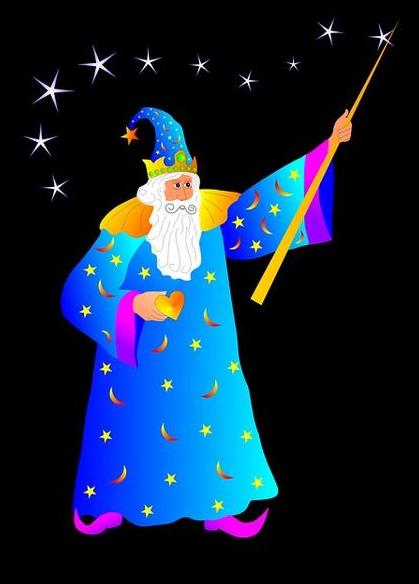 The Day After 9/11—Ramadan and Rosh Hashanah

gears in some fantastic machine,

comes to kiss Point B on Wheel Y,

rotating on its own good time,

for just a nano-second

having just brushed by

These precise events will come again,

you do the math if you wish.

But if I wore stars on a pointed hat,

beyond mere physics at work here.

Call it an omen, if you wish,

or the flat hand of something Greater

slapping us up side our

“Spin as you will,

you spin not alone.” 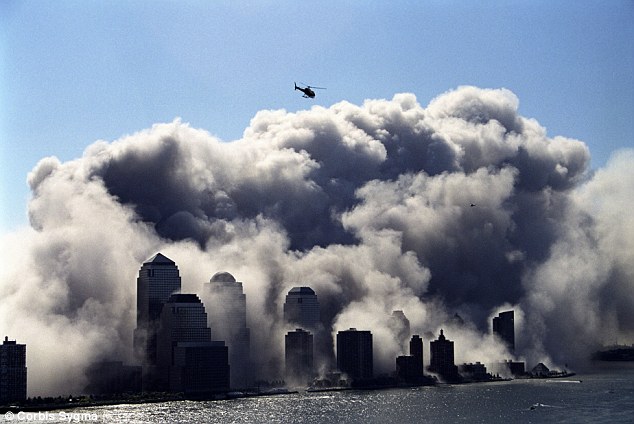 Ashes to Ashes, Dust to Dust

The ash and dust, they say,

rose as high as the skirts

across oceans and around the world.

Most has sifted by now to the earth.

My study is a cluttered mess.

Dust lays on any unattended

That speck, that one there,

the one by the stapler,

of the Dominican cleaner

who left her children

and went to work

only to be vaporized.

It is an honor to meet you.

Nine years ago I recalled that 9/11 was etched in the memories of Chileans as the date of their own national catastrophe—the 1973 coup d’état that overthrew the democratically elected government of Salvador Allende and ushered in a brutal dictatorship.  The United States government was more than just complicit in that. 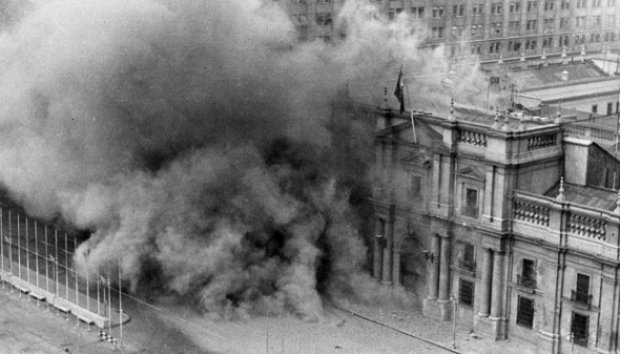 I’ll ante my 3,000 vaporized on a crystal morning.

I’ll give you my crumbling Towers and billowing ash.

You will call with the bombed rubble of La Moneda .

I’ll throw in a stack of terrorists with beards and turbans.

Let’s show our cards and see who loses.