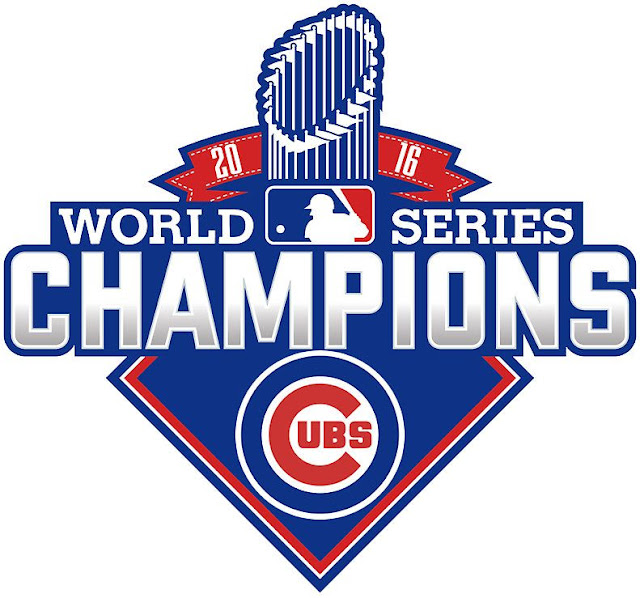 Note—Just five years ago yesterday as the U.S. was about to slide into disaster, the thrilling victory of the Chicago Cubs in the World Series ending a 108 year drought lifted my heart and generations of the most faithful fans in baseball.  Since then, were have endured tough times and this past season a promising team stacked by beloved players, most of them veterans of the 2016 triumph sputtered out mid-season and were dealt away in a fire sale.  Heart breaking.  But there were glimmers of hope among the replacements and Cubs fans are every ready to hope for next year.  This is the blog entry I posted the morning of the day after the game.

The morning after everything changed.  Barrels of ink have already been spilled.  More are tipping as I type.  TV sports yappers have waxed poetic.  The streets have filled with fans, yahoos, and wannabes alike.  Social media has gone into prolonged orgasm.  Here and there in lonely nursing home rooms feeble voices have cheered, fragile hands clapped, and tears brimmed the eyes.  The Chicago Cubs have won the World Series.

The Boys celebrating on the field after the final 10th inning out.

My beloved Cubs, I always say, as it they belonged to me.  This boy from Cheyenne who grew up a Cardinals fan has been hooked on the Boys in blue pinstripes since I wandered into Kap’s, a fanatic Cubs bar on Armitage near the old Town Burlesque in 1969.  My first trips to Wrigley Field were that year, the first adrenaline rush of a pennant race, the first embrace of heroes I would come to know as well as family, the first bitter heartbreak of disappointment.

I would return to the well year after year in good times and in miserable seasons—the same ones our beloved Chicago Shorty—Steve Goodman—knew so well and immortalized in both wistful and hopefully defiant song.  I wore out transistor radios listening furtively to Cubs games at various jobs.  Jack Brickhouse, Lou Boudreau, Milo Hamilton, and Harry Caray. 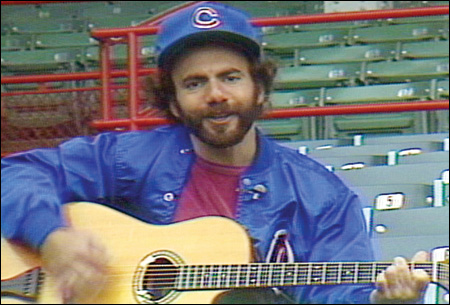 Steve Goodman--Chicago Shorty--wrote the anthem Go Cubs Go and The Dying Cub Fan's Last Request passed himself right before the Cubs clenched a Division Championship won a Division championship in 1989.

Yet my claims were shallow.  A veritable Johnny come lately.  The city, suburbs, and beyond are filled with generations of fans—a faith and hope passed on by miraculous baptism linking great grandfathers to babes in Cubs onesies.  The stories are legion.  This week the team supplied chalk for those deeply connected fans to inscribe on the bricks of Wrigley Field the names of loved ones who waited for this moment.  It would be a cliché if it weren’t so damn real.

As much as I have loved them, I surprised myself last night during the emotional rollercoaster of what may go down in history as the greatest game 7 ever played.  In the span of three and a half hours I soared to elation, was kicked in the gut by despair, and miraculously restored to faith.  I was not prepared for the surge of emotions at that final tenth inning out.  The celebrations in the field and in the streets were matched in a shabby Crystal Lake living room by the Old Man in a recliner and ratty old cap, his fair weather fan wife, and a perplexed dog. 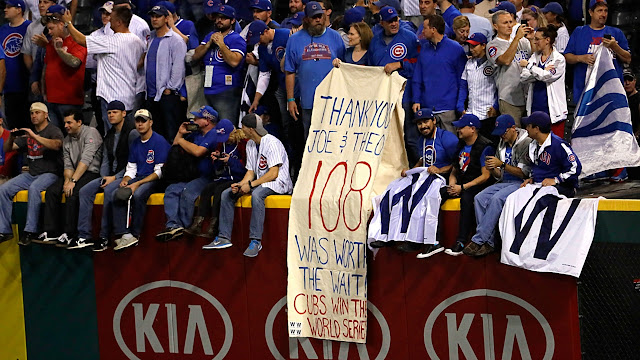 Cubs fans watching the final game on the Wrigley Field Jumbotron expressed the joy of generations.

I laughed.  I wept.  I could hardly sleep at all.

This morning a fog lay on the ground as I took the bus to work.  By the time we got to Woodstock it had lifted and the Sun was rising in a perfect blue sky just peeking through the crowns of golden maple trees.  The air electric, crisp, expectant.  Perfect.  Absolutely perfect.