Hanerot Halalu sung by the Maccabeats.

For the Third Night of Hanukkah, we will feature another song/prayer sung in the evening home service.  Hanerot Halalu is recited after the lights on the Menorah are kindled. There are several different versions.  The version by the Maccabeats that we are sharing here is used by many Ashkenazi communities. The Maccabeats were students at the Orthodox Yeshiva University in New York City.  The 14 member a cappella group was organized by Julian (Chaim) Horowitz in 2007.  By 2010 the were in the university’s graduate school when they released their first CD, Voices from the Heights which was underwritten by a grant from the school.  The album initially sold only 5,000 copies but their first Hanukkah video attracted two million hits in its first ten days.  The group was invited to sing at both the Israeli Knesset and twice at Barack Obama’s White House. 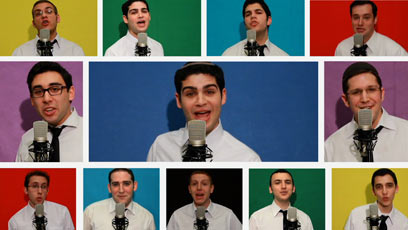 The Maccabeats meeting and singing remotely.

Now all graduated, members married, started secular careers, and moved all over the country but they continue to meet virtually weekly to rehearse and record.  A quartet of the members makes personal appearances.

In 2015 they released an EP collection of their first five Hanukkah songs, A Maccabeats Hanukkah from which this version was taken.