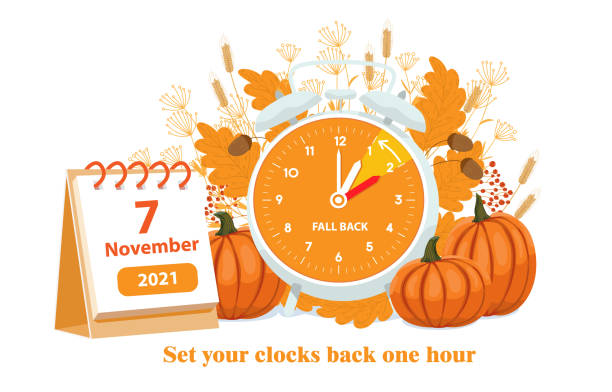 Almost everyone in America will revel in an extra hour of sleep tomorrow morning.  It happens every year, no matter how many announcements are made on the TV news, radio, newspapers, and now by cute Facebook memes.  And some folks who did fiddle with their time pieces get it wrong—is it spring forward, fall back or the other way around?

Anyway, here is a heads up to set your clocks back tonight before you got to bed.  Or if you are a stickler for accuracy wait until 2 am Sunday to set them back to 1 am.

It’s vexing.  And some think, foolish.  Take to oft quoted bit of folk wisdom usually ascribed to some Native American sage—Daylight Savings Time is like cutting a strip off the bottom of the blanket and sewing it to the top and thinking you have a longer blanket.

Perhaps.  But maybe there is something to it.  People have been doing it, or something very like it, for a long time. 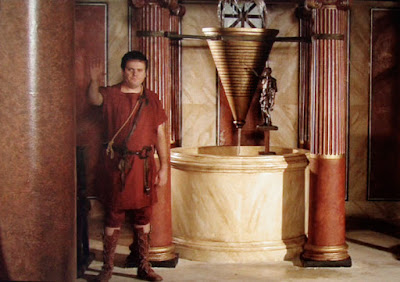 Roman water clocks operated on some version of water dripping from an inverted cone and filling a cistern.  In this ingenious device the pointing figure is on a float and as water rises in the cistern to gestures to wrings on the cone.  On many such clock the rings, or marks in the cistern itself, were numbered with winter and summer hours, leading archeologists to determine that something analogous to Daylight Savings Time was in use in the Empire for at least part of its existence.

Way back when togas were in fashion, those wily old Romans had water clocks inscribed with two sets of numerals—one for summer and one for winter.  And all of those years when there essentially were no clocks, peasants and farmers regulated their lives by the sun—beginning their days with its rise and ending their labors with its setting.  All pretty much the same idea as DST.

Benjamin Franklin, an early riser and frugal man, is sometimes credited with the idea.  He wanted to save money on candles.  As Minister to France in 1782 he found time to publish an essay, An Economical Project for Diminishing the Cost of Light.  He proposed adjusting hours to rise earlier in the warm months so that work could be illuminated through an open window, not by costly bee’s wax candles.  But no one took him up on his utilitarian proposal. 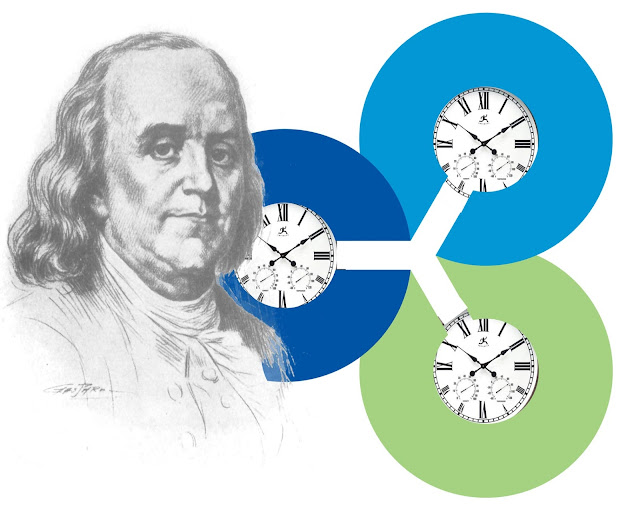 Benjamin Franklin is often credited or blamed for inventing the idea of Daylight Savings Time.  His proposal in a French journal may have been a satire.  Anyway, it got nowhere.

A similar notion was floated by New Zealand entomologist George Vernon Hudson more than a century later in 1895.  In a paper presented to the Wellington Philosophical Society he proposed a two-hour shift forward in October and a two-hour shift back in March.  Remember Kiwi land is in the Southern Hemisphere and seasons are reversed. There was some interest, but two hours probably seemed like a drastic, wrenching change.  Nobody picked up his idea.

In 1905 Englishman William Willett came up with a gentler approach.  He proposed moving the clocks 20 minutes forward each of four Sundays in April and switching them back by the same amount on four Sundays in September.  This, he reasoned would allow for gradual adjustment, much the same as naturally rising and beginning work with the Sun.  Liberal Member of Parliament Robert Pearce introduced the first Daylight Saving Bill to the House of Commons on February 12, 1908.  And there it languished, year after year despite constant lobbying and public appeals by Willett right up to his death in 1915. 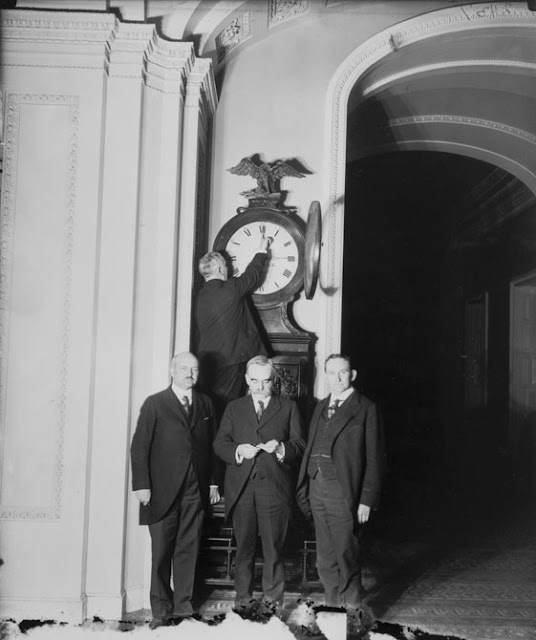 Setting a clock in the U.S. Capitol ahead for the first day of wartime Daylight Savings in April 1918.

As is so often the case, it took a war to accelerate innovation.  World War I, to be exact.  Imperial Germany instituted Sommerzeit—Summer Time—as a fuel conservation war measure on April 30, 1916.  Britain and France soon followed.  Russia did it in 1917.  And when the U.S. decided to go Over There, the Wilson administration adopted it in 1918.

The United States quickly abandoned Daylight Savings time after the war.  Farmers, who had once regulated their lives by the sun, now complained that the cows needed milking and the chickens demanded to be fed at set, familiar hours which were disrupted by the sudden hour changes.  But then farmers tend to be traditionalists and despise any change.  But they were a powerful political force. 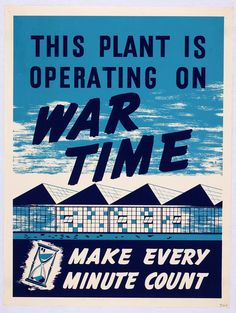 President Franklin D. Roosevelt proclaimed, War Time on February 9, 1942.  It essentially was year-round Daylight Savings Time.  In Britain, where fuel was at a premium, Double Summer Time was applied which moved the clocks two hours ahead of Greenwich Mean Time (GMT) during the summer and one hour ahead of GMT during the winter.  America abandoned its War Time in September of 1945.

After the War, many states, and sometimes local jurisdictions, continued to use Daylight Savings Time in the warmer months.  Starting and ending times varied and the result was a patch work map of Daylight and Standard Time.  It was hell on railroads and airlines, who needed consistent schedules, inconvenient for the national broadcasting networks, and a pain in the ass a lot of folks who found their jobs and residences in different times.

A clamor grew to straighten the whole damn mess out.  But no compromise could be found between those who wanted to return to year-round Standard Time and those who wanted uniform Daylight Savings Time in warmer months.

And of course, some did.  It led to problems.  Indiana, in thrall to its farmers, stubbornly clung to Standard Time.  Most of the state was in the Eastern Zone.  But a corner of the state around Gary and Hammond in Northwest was in the Central Zone.  That meant when DST would go into effect in neighboring Illinois, the area became an island out of sync with both the rest of its state and with the Chicago metropolitan area with which it was economically tied.  Similar time islands were found elsewhere.

After the Energy Crisis brought about by the Arab Oil Embargo of 1973, Congress passed emergency legislation extending uniform Daylight Savings time for 10 months in 1974.  After howls of protest that children were waiting for school busses in the dark, that was rolled by to 8 months a year later.  In ’76 DST reverted to beginning on the last Sunday in April. 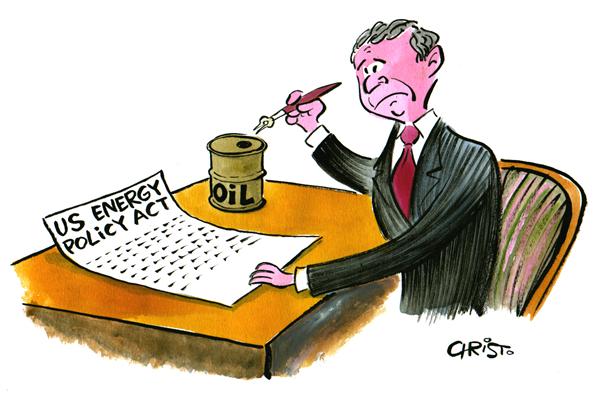 A key component of the Energy Policy Act of 2005 signed into law by George W. Bush was extending Daylight Savings Time.

But Congress was not done tinkering.  Energy conservation benefits of DST were evident.  In 1985 it pushed the start date back to the first Sunday in April.  The Energy Policy Act of 2005 extended DST by about one month starting on the second Sunday in March and ending on the first Sunday in November. That went into effect in 2007.

Today most of the US observes DST except for Hawaii and most of Arizona, and Puerto Rico, the US Virgin Islands, American Samoa, and Guam.

And, oh year folks from Gary no longer have to change their watches every time they drive across the Illinois border.

Meanwhile new efforts are being made to end it all together.  Folks resent messing with their bio-rhythms, and the bother of changing all of the clocks that are now on almost all appliances.  It is widely mocked by late night TV hosts and in social media posts.

Last year it looked like Illinois was going to abandon Daylight Savings time, but a busy legislative schedule meant that the clock ran out on the session and the incoming legislature would have to begin the whole process over again from scratch—hearings and conferences between House and Senate included.  So far it has not advanced in either house this year. 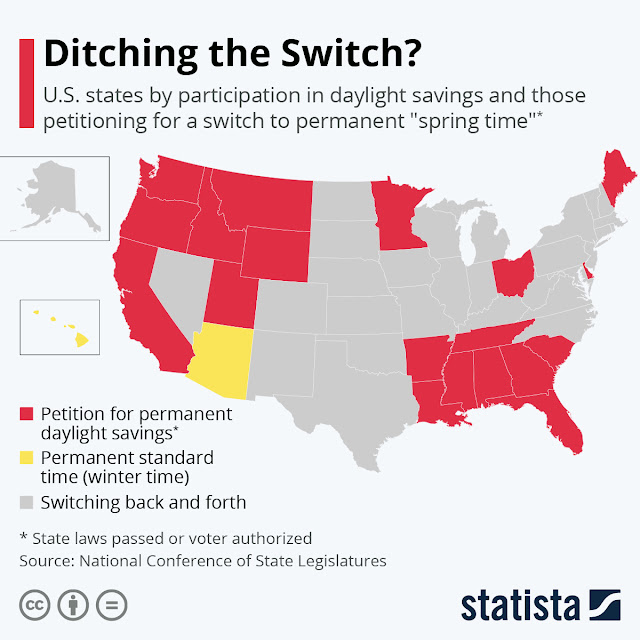 With the exception of California and Delaware most states petitioning for permanent Daylight Savings Time are solidly Republican or are swing states.  But the idea  polls positively across the country.

In the last four years, 19 states have enacted legislation or passed resolutions to provide for year-round Daylight Saving Time, if Congress were to allow such a change, and in some cases, if surrounding states enact the same legislation. Because federal law does not currently allow full-time DST, Congress would have to act before states could adopt changes.

Two Republican Federal legislators, with some Democratic co-sponsors are leading the national effort for the Sunshine Protection Act of 2021. In January, Congressman Vern Buchanan introduced H.R.69, and in March Sen. Marco Rubio introduced S.623. Both bills call for DST to become permanent in the U.S. year-round.  With rare bi-partisan appeal the legislation is thought to have at least a shot of being enacted.  The Biden administration has not signaled its position yet.

If it comes to pass the Sun will never be directly overhead at noon.

Posted by Patrick Murfin at 7:42 AM