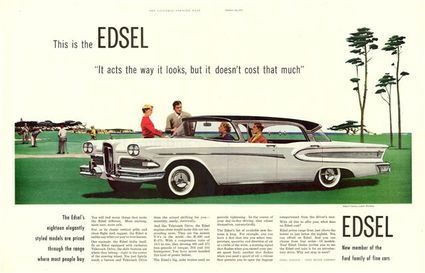 A magazine ad from the much ballyhooed launch of Ford's new Edsel for the 1958 model year.

It was a mercy killing, of sorts.  On November 19, 1960 the Ford Motor Company announced it was killing its Edsel brand in just its third model year.  Named to honor Henry Ford’s only son and a former company president who had died in 1943 at the age of 59, the car was launched amid considerable fanfare in 1957 for the ’58 model year.

It was a large car aimed at the mid-range market and had several break-through features and unique styling.  It was the styling the public noticed first, dominated by the shield-shaped center grill that was a radical departure from the horizontal grills that had become standard on post-war on cars.  The public thought that instead of being ultra-modern like the pre-launch hype that it was ugly.

The Edsel did feature a number of innovations.  Some, like dashboard warning lights for low oil levels and an over-heated engine, self-adjusting breaks, seat belts, and “childproof” automatic locks on rear seats, eventually became standard in most cars.  Others like the rolling dome speedometer mounted on top of the dashboard, simply puzzled buyers. 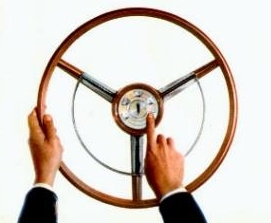 The highly touted Teletouch push button transmission in the center of the steering wheel was clumsy and unpopular with drivers.


The biggest flop was the highly touted Teletouch push button transmission located on the recessed hub of the steering wheel.  Not only was it clumsy to use, because divers were used to having the horn mounted on the steering wheel hub and there were reports of some reflexively hitting the buttons while trying to beep the horn resulting in damage to the transmission and accidents.

The car was also in competition with Ford’s already established Mercury brand in the mid-priced range.  Launched during a recession with mid-priced cars slumping in sales, both brands suffered.  In ’58 Edsel offered five styles, the two largest built on Mercury platforms, the rest on Fords.

The first year 63,110 Edsels were sold in the United States; and 4,935 in Canada—a solid launch but well below expectations.  But production problems—the cars were assembled on Ford and Mercury assembly lines after they completed daily quotas of the other cars—caused quality problems.  Sometimes cars were delivered with some of the parts not yet assembled but packed in the trunk for dealer mechanics to assemble.  Parts did not fit well.  The top-of-the-line V-8 engine although powerful was detested by mechanics unfamiliar with its flat head design.

Many customers who had enthusiastically bought a new Edsel felt they had purchased a lemon.  Word of mouth on the car went from bad to worse during the model year and automotive magazines and newspaper columns pummeled it.  Pretty soon TV comics were doing Edsel jokes. 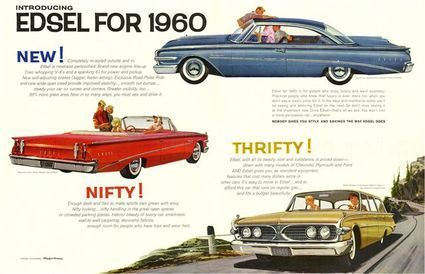 
In its second year, Ford ended Edsel as a standalone division and merged it into its Lincoln- Mercury division.  It scrapped the two largest models and built cars only on the Ford platform. That year sales plummeted to 44,891 in the U.S. and 2,505 in Canada.

In its final year, the Edsel dropped most of its distinctive features and became essentially a Ford with different trim.  Dealers could hardly give them away.  When Ford executives finally pulled the plug only 2,846 were built for the 1960 model year.  After the announcement that the brand was being killed, the many remaining cars on dealer lots precipitously lost value.  Many could not be sold—or sold up to two or three years later at essentially used car prices. 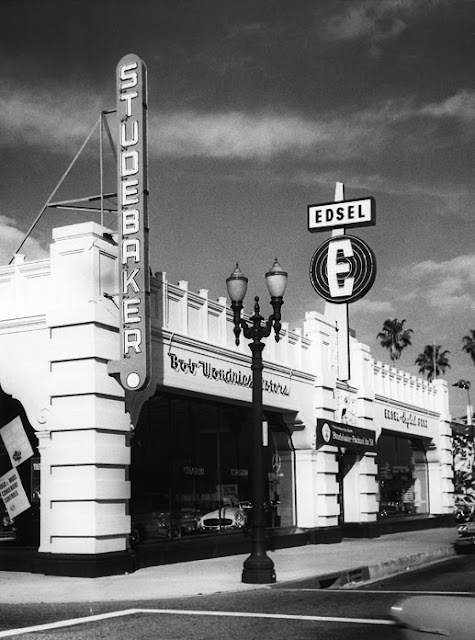 Among the big losers were the local businessmen who opened Edsel dealerships.   This one was in for a double whammy--it also sold the soon doomed Studebaker.


In total 118,287 Edsels were built and the company lost $350 million—over $2.5 billion in today’s Dollars.  The company was dealt a severe blow from which it did not recover until the compact Falcon exploded on the market selling 400,000 in its first year.

Developed for Edsel, the Comet was stripped of that identity for marketing in the 1960 model year and reassigned to the Mercury brand in the next model year.  Based on the Ford Falcon it became a successful relatively cheap small car, not quite a true compact.


One Edsel platform did survive.  The Comet was planned for the ’61 model year and shared attributes with the Falcon.  It was assigned to Mercury instead and went on to be a solid success.

61 years after its demise, Edsel remains the byword for corporate failure in America.