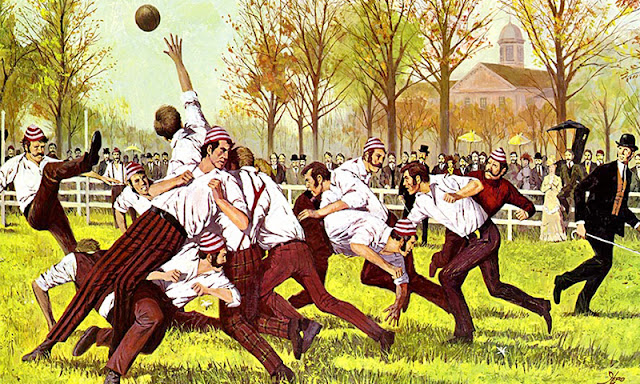 According to historians of American sports the first official college football season got underway on November 6, 1869 when teams from Rutgers College, now Rutgers University, and the College of New Jersey, now Princeton University, got together on the Rutgers campus for a rough and tumble game of football which was sanctioned and approved by both colleges.  It was a short season.  The next game was played by the same teams at Princeton one week later.  Season over.  Just two teams and two games.

The Queensmen of Rutgers won the first game by a score of 6-4 but the New Jersey Tigers came back in the re-match to win 8-0.  The anal retentive record keepers of intercollegiate sports are torn on who to retroactively declare the first unofficial national Champion since a third and possibly decisive game was never played as originally intended, probably because the two teams could not agree under what rules to conduct the contest.  Princeton was named the champion by the Billingsley Report and the National Championship Foundation, but respected college football research historian Parke H. Davis named the two teams co-champions.

But for the players—there were no coaches yet—the split season had to be a lot like kissing your sister, pleasant enough but not thrilling.

To say that an intercollegiate sport of any kind was in its infancy is hardly an exaggeration.  Only rowing was widely contested and had been since Harvard and Yale first went at it in 1852.  A few colleges were playing a form of the new bat and ball game called baseball beginning with Amherst vs. Williams Colleges in 1859 and that was pretty much it.

Students had been playing rough kick ball goal games on a casual pick-up team basis on several campuses for at least twenty years, maybe longer.  There were few, if any rules, no set number of players on a team—anyone could jump in the game—and no set field dimensions.  Students let off steam and tended to emerge with black eyes, broken teeth, fractured bones, and a deep abiding thirst quenchable only with quantities of beer or rum punch.  College administrators took a dim view of it but considered the games preferable to another popular college pastime—rioting.  By the post-Civil War era football clubs were formed on some campuses and informal—actually illegal—matches between unofficial teams sometimes occurred.  Heavy betting by players, students, and faculty rode on some of these clandestine games.

The colleges of Rutgers and New Jersey finally decided it was best to sanction the competition to control the violence and debauchery that the unofficial matches had encouraged.  Still the serious academics were unsure and dubious about games and frivolity in general which ran against the entrenched Puritanism that prevailed among most of the faculties.

Arranging the official matches was not easy because each team played by different rules which had evolved independently over time.  Finally, it was determined to play each game by the home team’s rules—which turned out to be a decisive advantage in each game.  The decision of what rules to use in a final third game was put off.  In the end neither team would agree to an advantage to the other and the third game had to be called off. 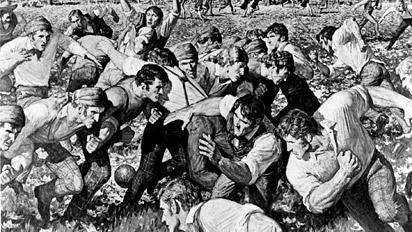 This view of the game better captures bloody melee of the game--young gentlemen with blood in their eyes.


Modern Americans would hardly recognize the game that was played on November 6 as Football.  It more closely resembled a crude version of what we now call soccer with some elements of Rugby, our form of the game’s most immediate ancestor.  The ball was round.  Players wore neither helmets nor identifying uniforms and ran in slick, leather soled street shoes or boots.  Twenty-five men on each side played both offense and defense.  There were no time outs, even for injuries and wounded players had to be dragged off the field by spectators dodging the action.  There also were no substitutions so knocking an opponent unconscious or breaking a leg was advantageous.  Players were forbidden to pick up and run with the ball.  The ball was advanced by kicking.  The field was 125 yards long and 75 yards wide, and unmarked. Under the circumstances the game could only be bloody and brutal.

Rutgers had the advantage of both using its own rules and of some speedier runners who could occasionally break out of the mob scene and advance the ball.  Thus, they won the first game.

At New Jersey the rules allowed a player to catch the ball with his hands on the fly and execute a free kick which could send the ball high over player’s heads and well down field.  This erased Rutgers’ advantage and allowed the Tigers to blank their rivals.  Rutgers was outraged by the “unfair tactics” but there was nothing they could do about it.

Interest at both colleges in the games was so high that during the short “season” students could hardly concentrate of their studies, so wrapped up in the games were they.  Faculty members pontificated about the moral collapse of a generation and wrung their hands over the distractions—setting up another time honored tradition.

Over the next decades America went sports crazy.  Baseball erupted seemingly overnight into the National Pastime.  Boxing was closely followed from men’s club smokers to ballyhooed World Championships in multiple weight divisions covered in detail in illustrated magazines like the Police Gazette.  Thoroughbred racing and county fair pacers and trotters attracted racetrack crowds and fueled a burgeoning bookmaking industry.  College football would be swept up in the general rise. It wasn't until 1886 that Yale footballer Walter Camp wrote his standardized rules of the game.  He went on to a long career as a coach and was honored as the father of football.


Sports writers for major newspapers began to cover the games and clamor for standardization of the rules.  Reformers demanded rule changes that made the games less of a blood bath.  On different campuses rules evolved differently.  It was not until June 4, 1875 that a form of the game recognizable to us—running with an oval ball, 11-man sides, and tackling to end a play would be contested between Harvard and Tufts Universities.  The next year Yale player Walter Camp drew up standardized rules based on the Rugby game being played by McGill University in Toronto. Harvard, Columbia, and the College of New Jersey—formed the Intercollegiate Football Association, the first league.  Yale joined three years later in 1879.  The rest, as they say, is history. 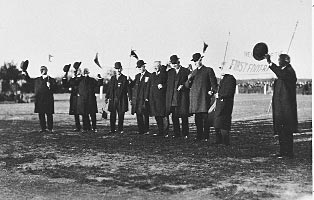 On the 50th anniversary of the first game Rutgers honored the surviving members of the 1869 team.


Rutgers has always been particularly proud to have hosted the first college football game.  In fact, their boasting about it has kept their claim alive.  In 1919, the fiftieth anniversary of the game the University honored all the surviving members of the team at their Homecoming celebration.  Members continued to attend until the last one, George H. Large died in 1939, seventy years after the most memorable day of his life. 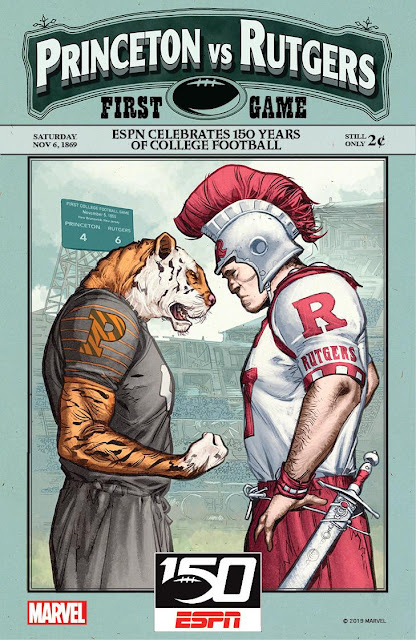 For the 150th anniversary of the game in 2019 ESPN issued a souvenir Marvel comic.