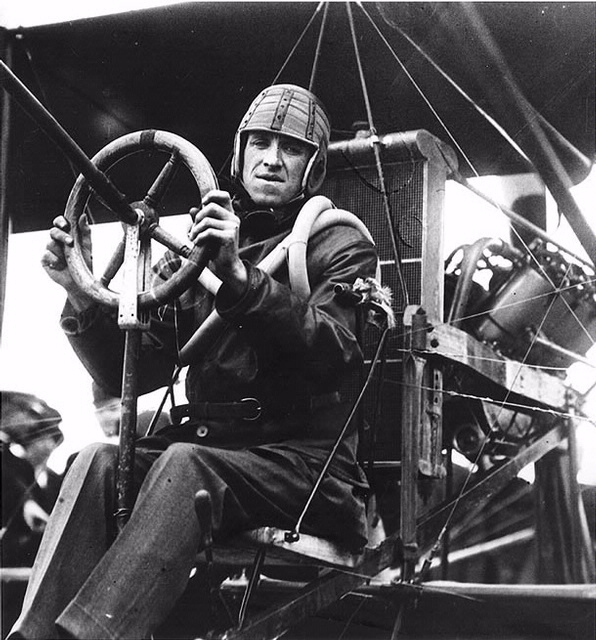 Civilian pilot Eugene Burton Ely at the controls of his Curtis bi-plane. He had been flying for about six months.

When a young, self-taught pilot named Eugene Burton Ely left the deck of the U.S. Navy cruiser USS Birmingham in a primitive stick, bailing wire, and canvas winged Curtis pusher biplane on November 14, 1910 he barely escaped with his life and his aircraft intact but raised the curtain on naval aviation.

Ely, a 24 year-old Midwesterner from Iowa, may seem like an unlikely aviator.  But in those early days of aviation, he was not untypical of the kind of daydreaming tinkerers and speed enthusiasts who were drawn to the new opportunities in the sky.

He was born in the farming community of Williamsburg, Iowa on October 21, 1886.  His family soon moved to the nearby river port and industrial center of Davenport.  There he graduated eighth grade from Davenport Grammar School 4 in January 1901.  He would later claim to have attended and graduated from Iowa State University in 1904.  But neither the University at Ames nor any other Iowa college or university has any record of his attendance.  Neither does Davenport High School.  It is safe to say his formal education ended, as it still did for a majority of young Americans, after grammar school.  The higher education claims were simply pioneering resume padding adopted as he rose in his chosen field and at the end harbored hopes for a commission and career in a yet unformed Navy aviation service.

The boy was attracted, like many clever lads, to things mechanical and fast.  He taught himself, somehow, to drive in the relatively few autos chugging up and down the bluffs of his hometown.  He also learned how to repair them, even making parts himself.  His first known job was as the mechanic and chauffeur to the Father Smyth, a Catholic priest in Cosgrove who was himself bitten by the speed bug and owned a snazzy red Franklin touring car.  In it young Ely had his first taste of glory, setting a speed record for a run between Iowa City and Davenport.

Ely was restless and soon headed West seeking fame and fortune.  He was in San Francisco for the 1906 earthquake and fire.  There was plenty of work in the wake for the fire for drivers.  He soon drifted into car sales and the auto racing that promoted the dozens of competing brands of cars.

Despite a somewhat homely long face, he must have cut a dashing figure.  He caught the eye of teenager Mabel Hall of the City by the Bay who he married on August 7, 1907 when he was 21 and she was 17—young enough to require her mother’s consent.

In 1909 he moved to Nevada City, the Northern California gold mining and timber center where he drove an auto stage shuttling passengers and parcels between remote communities.

A year later the couple had moved to Portland, Oregon where he got a job as a salesman for E. Henry Wemme, a wealthy pioneering dealer of Haynes-Apperson, Oldsmobile, REO, and Pierce-Arrow.  Wemme became attracted to the infant aviation industry and also became the agent of the Curtiss Aeroplane Company for the entire Pacific Northwest.  This was more impressive sounding than it seems because not a single plane had ever been sold in the area until Wemme bought one himself to use as a demonstrator.  The trouble was that he didn’t buy the proffered pilot lessens that Glenn Curtis offered with all his early sales.

Ely eagerly volunteered to fly the machine, after assembling it from parts that arrived in a crate.  He was sure flying could not be harder than driving, or much different.  He was wrong.  He crashed and destroyed the plane on his first attempt to take it up.  Embarrassed, he bought the wreck from his boss, paying it off from his salary and sales commissions.  In his spare time, he painstakingly re-assembled the plane.  This time he taught himself to fly from printed instructions.  By spring of 1910 he was making flights around Portland.

With just weeks under his belt as a pilot, that June he crated up his bi-plane and shipped it to Minneapolis, Minnesota to participate in a major flying festival and exhibition being held there where he met, and impressed, Glenn Curtis himself.  Curtis hired Ely to be one of his demonstration pilots.  A scheduled first flight for the company at Sioux City, Iowa had to be scrubbed because of mechanical problems so his first exhibition was at Winnipeg, Manitoba, Canada on July 10, 1910.

The rest of the summer and early fall was filled with demonstration dates.  On October 5 Ely was issued License #17 from the Aero Club of America, an indication of admittance to elite status in his dangerous profession.  All the first 20 license holders, including both Wright Brothers and Curtis were involved in serious crashes, most on multiple occasions.  The majority would be killed in crashes in their first three years in the air. 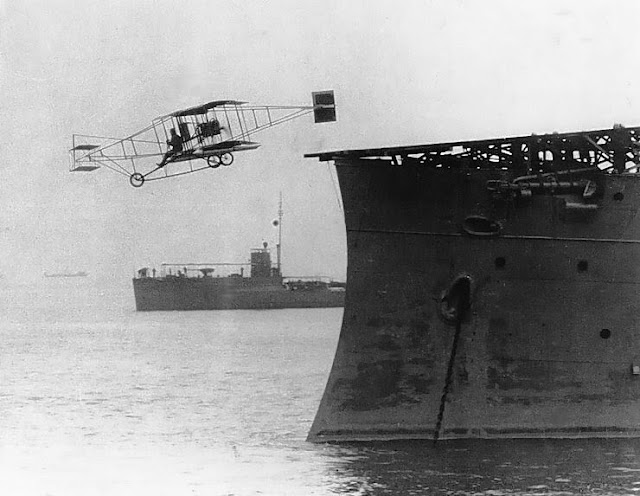 Ely's Curtis pusher dips upon leaving the take-off platform on the USS Birmingham.


That same month with his license fresh in his pocket Ely joined Curtis in an important meeting with Captain Washington Chambers who had been designated by Secretary of the Navy George von Lengerke Meyer to investigate possible operational uses of aviation by the fleet.  Chambers commissioned Curtis to perform a series of tests, taking off and landing on warships. Ely was selected as the pilot.

An 83 foot-long wooden platform was hastily built on the bow of the two year old light cruiser USS Birmingham.  Since no funds were available from the Navy Budget, early flight booster John Barry Ryan donated $500 for construction and an additional $500 as a prize for a successful launch.

The ship was moored in the waters off historic Hampton Roads, Virginia, not far from the site of the legendary battle between the Union ironclad USS Monitor and the Confederate CSS Virginia (the captured and re-fitted former USS Merrimac) which introduced an earlier new era in Naval warfare.  The water was glassy calm and winds light on November 14 when Ely raced his Curtis pusher down the short makeshift runway.  He barely made airspeed and at the end of the platform the plane dropped until is wheels splashed in the water.  Ely fought to regain elevation and keep the plane in the air.  His goggles were covered by brine spray seriously impairing his vision so that he abandoned the original plan of circling the harbor and landing at the Norfolk Navy Yard.  Instead, he made straight to shore to shore and made a rough but safe landing on the beach.

Still, it was a successful enough flight to claim the Ryan ship-to-shore flight prize. 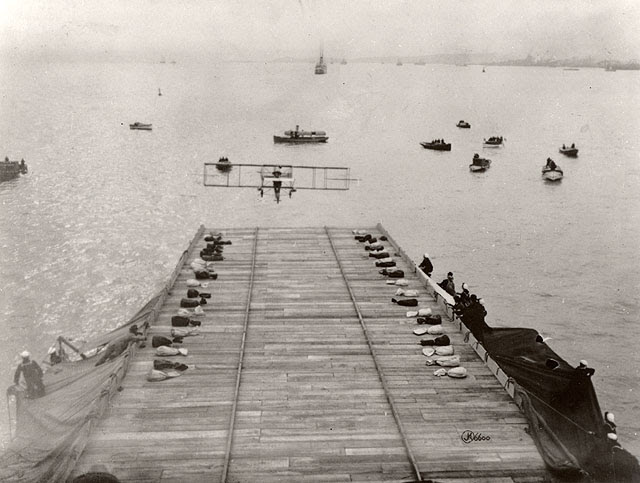 Ely comes in for the first landing on the USS Pennsylvania.


Ely returned to his civilian demonstration flight for Curtis, now a famous and acclaimed airman for his naval feat.  Then he crossed the country to his old stomping grounds of San Francisco where the second half of his original challenge was to be completed—landing on a ship.  On January 18, 1911 Ely took off from Tanforan Racetrack in San Bruno, California and landed successfully on the armored cruiser USS Pennsylvania.  It was not only the first successful landing on a ship anywhere, it introduced the tail-hook landing arrest system designed and built by aviator and circus performer Hugh Robinson, which became essential in aircraft carrier operations to this day.

The pilot confidently told reporters that the landing “…was easy enough.  I think the trick could be successfully turned nine times out of ten.”

Ely was now enthusiastic about a possible career with the Navy.  He communicated with the Navy Department offering his services.  Capt. Chambers had to give him the discouraging news that he could not enlist him because the Navy did not yet have a flying service.  But Chambers gave him every signal that he would be a top candidate as soon as such a service was inaugurated.  He also had advice for Ely, whose demonstration flights for Curtis, including dangerous dives and steep turns which strained the capacity of his fragile aircraft, to cut it out for the sake of his life and the future of aviation.

Of course, Ely, always a daredevil, did not take the advice to heart.  When asked by his home state newspaper the Des Moines Register if he would retire on his laurels, he said, “I guess I will be like the rest of them, keep at it until I am killed.”  It proved to be prophetic. 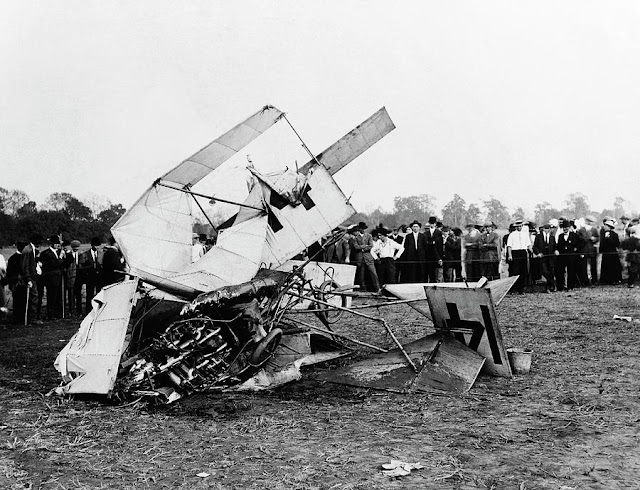 Ely's fatal crash in Georgia a month shy of his triumphant cruiser launch.

At an exhibition at Macon, Georgia on October 11, 1911, just days short of his 25th birthday, Ely failed to pull out of a dive.  His Curtis biplane crashed.  Ely jumped clear just before impact but broke his spine and died on October 19.  He was buried in his hometown on his birthday.

In 1933 Congress posthumously awarded the Distinguished Flying Cross to Ely, “for extraordinary achievement as a pioneer civilian aviator and for his significant contribution to the development of aviation in the United States Navy.”  An exhibit of retired naval aircraft at Naval Air Station Norfolk is named for him, and a granite historical marker in Newport News overlooks the waters where he made that first take off from a ship.  To commemorate the 100th anniversary of that flight, Commander Bob Coolbaugh flew a personally built replica of Ely’s Curtiss from the runway at NAS Norfolk on November 12, 2010.

Lieutenant Theodore Ellyson became the Navy’s first pilot in 1911 when Curtis offered to train an officer for free.  He and Curtis went on to collaborate in the development of a float plane and he became the first pilot to be launched from a ship-born catapult.  But it wasn’t until 1914 than a formal Naval Air Service was formed. 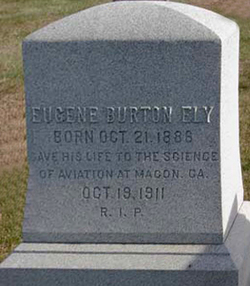 Ely's headstone in his hometown of Williamsburg, Iowa.

The Birmingham’s place in naval aviation history was not over either.  Subsequently converted to a Torpedo tender she became flagship of the Atlantic Fleet Torpedo Flotilla.  In 1916 when conducting operations in support of the landing of an expeditionary force at Veracruz during the Mexican Revolution, she deployed two Curtis float planes, launched by catapult to scout for mines.  It was the first military mission by a US heavier-than-air aircraft.