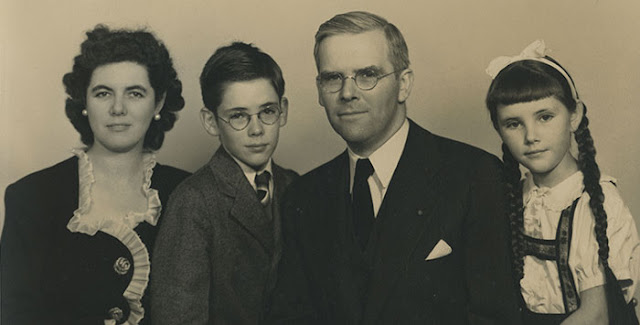 Martha Sharp; her son Waitstill, Jr.; husband Rev. Waitstill Sharp; and daughter Martha after their return from Nazi occupied Europe.  In 1939 the Unitarian minister and his wife left their church and children to aid and rescue Jews and intellectuals in Prague, Czechoslovakia in a daring mission under the noses of the Nazis.  They returned to Europe to rescue Jews from occupied France. Photo from Two Who Dared: The Sharps Story.

Two Who Dared: The Sharps Story, a documentary film about the Unitarian couple who rescued Jews in Prague and France during World War II will be shown on Zoom this Thursday, November 18 at 6:30 pm by the Tree of Life Unitarian Universalist Congregation in McHenry, Illinois.  The film will be introduced by the congregation’s interim Minister, Rev. Jenn Gracen who has preached about the couple’s dangerous missions and will be available after the showing to answer questions and facilitate discussion.

In 1939 Rev. Waitstill Sharp, minister of the Unitarian Church of Wellesley Hills in Wellesley, Massachusetts responded to an urgent plea to go as quickly as possible to Prague, Czechoslovakia to help endangered writers, artists, intellectuals, and Jews out of the country before the Nazis occupied the city.  Dozens of other ministers had already turned down the dangerous assignment.  Not only did Waitstill agree but his young wife Martha determined to join her husband.  Not only did they leave their church, but they had to leave their 8-year old son and 3-year old daughter in the care of friends.

They arrived in Prague weeks for German troops to occupy the city.  Despite this as neutral Americans they established a refugee aid office and began work.  Waitstill navigated the Nazi bureaucracy to try to arrange travel documents and when he couldn’t obtain them lied to the authorities and had forged documents created.  Martha often played a cloak and dagger role dodging police to deliver documents and move endangered individuals to safe house locations.  Eventually she escorted 35 refugees—journalists, political leaders, and orphaned children—to England crossing occupied Poland and Germany in a sealed railway car.  Waitstill left Prague for Switzerland a few weeks later.  The couple returned to the U.S. 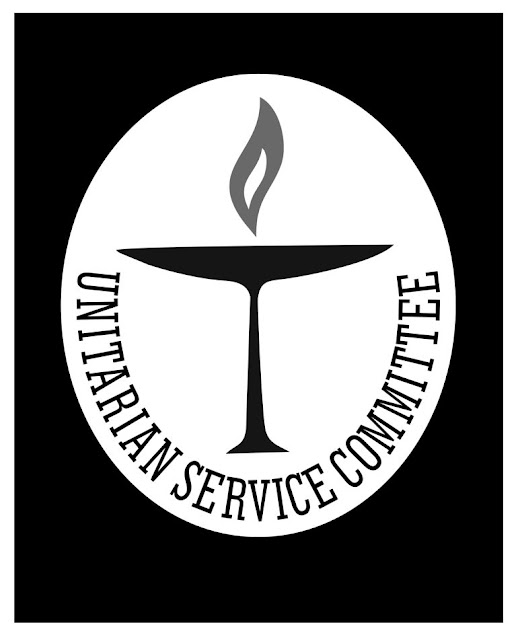 The logo of the Unitarian Service Committee was devised in France to make documents look official.  The Untiarian Universalist Association later adopted the flaming chalice as the symbol for the faith.

After a reunion with their children and a short respite, they accepted a new assignment to France as the newly established Unitarian Service Committee’s “ambassadors extraordinary.” But before they could arrive in Paris to set up an office, the Germans occupied the city. Instead, the Sharps opened an office in Lisbon, since thousands of refugees were escaping to neutral Portugal, hoping to find safety and a ship to take them to the United States or other destinations outside of Europe.  Martha Sharp worked at a new Unitarian Service Committee office in Marseilles, which was the primary port in unoccupied Vichy France from which refugees could escape where she distributed milk and food to those crowding the port.  She doggedly battled numerous bureaucracies to secure exit visas, transit permits, and identity papers for 29 children and 10 adults then led them on a perilous trek by foot across the Pyrenees Mountains into Franco’s Spain and from there to Lisbon from which they sailed to New York. 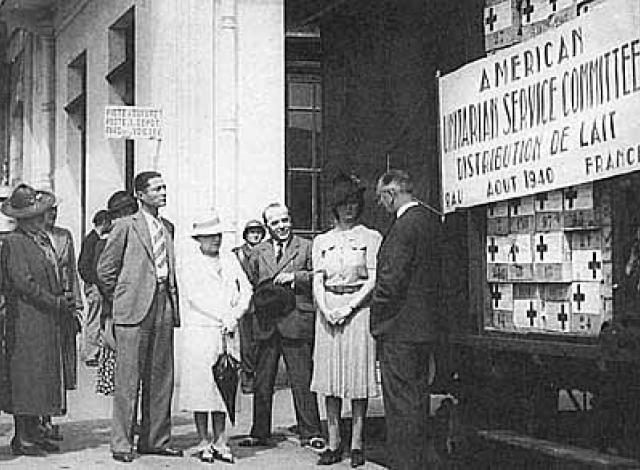 Martha Sharp, second from right with a load of milk for distribution to refugee children at the Unitarian Service Committee office in Marseilles in unoccupied Vichy France.  Some of her other work had to be conducted more clandestinely.

For these lifesaving services both Waitstill and Martha were honored as The Righteous Among Nations by Yad Vashem, Israel’s Holocaust memorial, for risking their lives to aid Jews during the Holocaust.  They were the second and third Americans so honored.

In 1944, Waitstill was appointed to a United Nations Relief and Rehabilitation Administration (UNRRA) position in Cairo. Martha returned to Spain and Portugal, assisting refugees, mainly Spanish Republicans, to emigrate to South America.  In 1946, Martha ran for Congress, but lost, in part because of accusations that the USC was a leftist or communist-supporting organization.

Although the couple divorced after the war, due to the strains of prolonged separations, both continued to serve.  Marth continued to advocate for refugees and was a strong supporter of Israel.  Waitstill returned to parish ministry before retiring. He died at age 80 in 1983.  Martha was 94 when she died in 2099.

Two Who Dared: The Sharps Story was a years-long effort of the Sharp’s grandson Artemis Joukowsky who never knew anything about their war-time accomplishments until he literally stumbled on them while researching a class project in high school.  Neither grandparent had ever mentioned it.  He conducted hours of interviews, especially with Martha, and uncovered various troves of documents and family photos.  Eventually he interviewed some of those who they saved and other witnesses.  He directed and co-wrote the documentary which was released in 2012. 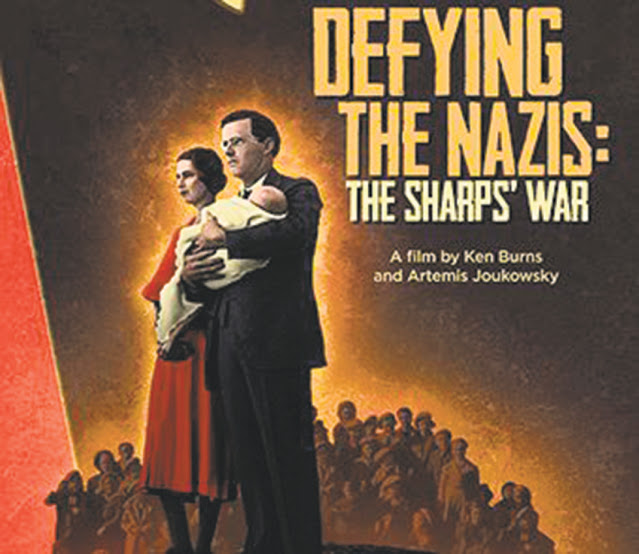 The Ken Burns, PBS version of the story.

The film so impressed Ken Burns that he signed on as a producer and co-director of an expanded version aired on PBS in 2016 as Defying the Nazis: Sharps’ War.  The main difference between the two versions was the addition of Tom Hanks as the voice of Waitstill.  Tree of Life will be sharing the original version.

The showing is free to the public but free-will donations can be made to the Unitarian Universalist Service Committee (UUSC), the continuation of the Unitarian Service Committee.  It partners with local grass roots organizations around the world and in the US on social justice projects including refugee emergencies and immigration justice.

Back in February Rev. Jenn Gracen preached on the Sharps.  Her sermon and my work at the time on with The Coalition to End the ICE Contract in McHenry County moved me to once again commit poetry. 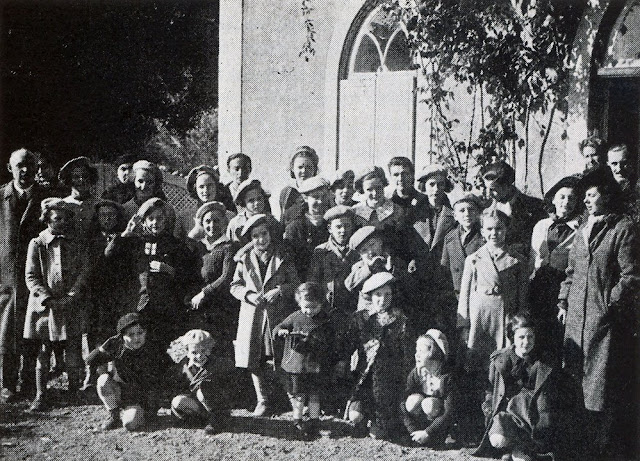 Martha Sharp, far right, and twenty seven children she shepherded from France to New York in 1940.  Most would otherwise not have survived the war.

and left children and comfort

for Prague on the edge of doom.

Before they quite knew what had happened

they were doing un-Unitarian things—

He did most of the paper work and keeping accounts,

and playing shell games with the Gestapo.

The demure Mrs. was the secret agent

At the very last possible moment

she, using documents faked and fudged by him

got thirty-seven marked men on a train

out of Prague on a train that

had to cross Germany

to get to France

Back in America by the skin of their teeth

they played with the children

who hardly knew them

and then were sent back to Europe at war.

They made their way to Vichy France

and she came out with twenty-seven Jewish girls,

leading them on foot across the Pyrenees

and eventually to New York

on an ocean liner that narrowly avoided

being sunk by a U-boat.

That’s the tale we’ve been told.

We wonder if we could have done it.

we wonder if we even should—

their own children, after all,

and their marriage shattered.

There is still plenty of horror in the world

yet who is dashing off to Kurdistan

to defy Syrians and Turks,

to bloody Yemen where our drones rain death,

or to a dozen other would-be holocausts

What if we didn’t even need to leave the county,

our own warm beds,

the bosoms of our families?

What if we sheltered the undocumented

and bar by bar

just down the street?