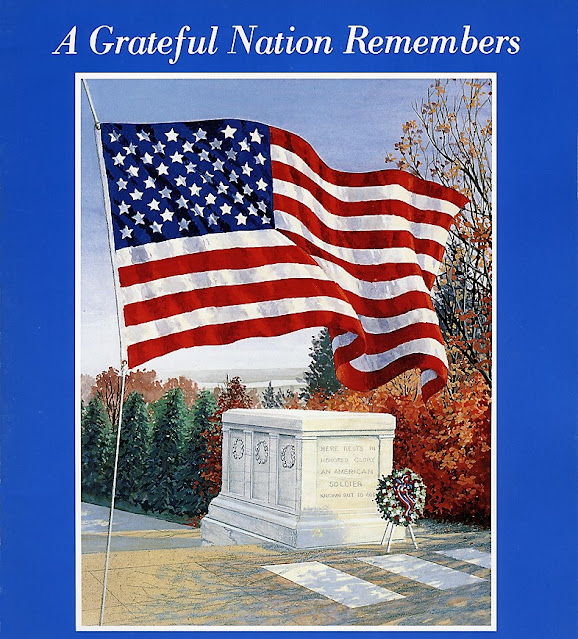 This year for Veterans Day instead of my usual post on the history and meaning of the observation the World War I Armistice on November 11, 1918 I thought I would resurrect an old chestnut that I first read as a Chalice Lighting to open services at the old Congregational Unitarian Congregation in Woodstock, Illinois about 2000.  I read it subsequently when the congregation moved and was renamed the Tree of Life UU Congregation in McHenry.  It was included in my 2004 Skinner House collection, We Build Temples in the Heart.

It was based on the memories of a boy from Cheyenne in the 1950s.  Reviewing it now, I am struck that the World War II is fast fading away.  In not too many years the last of them will gone, just as I remember the passing of the last World War I vet at the age of 110 in 2011.  The cohort of their children, the so-called Baby Boomers are fast aging as well.  I am 72 and friends with parents who served in what Studs Terkel called the Last Good War are about the same.

It occurs to me now that my grand children won’t understand much of what I wrote about.  They live in a different world.  World War II and post-war America are decades older for them than the Great War was for me.  Neither will they know or care about our Vietnam War choices obliquely referenced in the last lines. 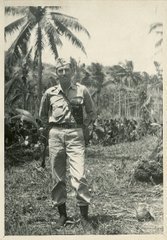 One of those ubiquitous photo on the wall--First Lieutenant W. M. Murfin, U.S, Army Medical Corps on Leyte in the Philippines, 1943.

Somewhere in every home a handsome young man

peered from a tinted photograph,

overseas cap at a jaunty angle

or the crisp, square beanie of a gob.

usually someone’s Dad in some other life,

but sometimes the ghost of someone frozen in time,

caught in that picture like a fly in amber

while bloody shreds were left draped on barbed wire

ten feet from the high water on an anonymous beach,

or splattered on the glass of the ball turret

of a Mitchell bomber spiraling for an appointment

with a German potato field,

or bobbing in a sea of burning oil, naked and parboiled. 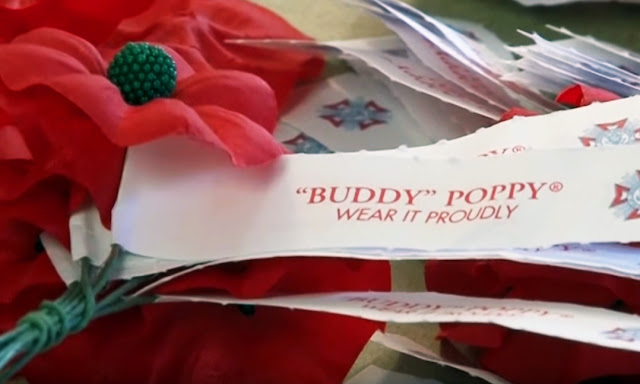 A  Buddy Poppy peddled on every street corner.

The veterans in neat blue uniforms,

fistfuls or red paper poppies in one hand,

shaking white cans for nickels with the other.

on every street corner, May and November

and no decent man or woman passed

without emptying pockets of change,

twisting flowers into buttonholes, on to purse straps,

without ever looking the peddler in the eye. 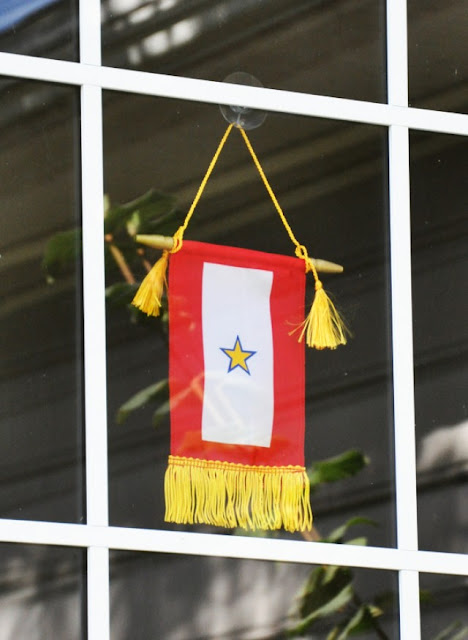 A Gold Star Flag represented a family member lost in the War.

Inside scrapbooks with brittle pages and fading ink,

kept far up in the front hall closet behind hatboxes,

between the leatherette boards bound by black shoelaces,

amid the rations coupons, V-mails,

white edged in red and blue,

a gold star in the center. We raided our Dads' footlockers and haunted surplus stores for our play wars.

In the neighborhood we looted footlockers and duffel bags,

saved our allowances for forays to the Army/Navy Store,

and amid the prairie burrs and grasses,

between the wild rose hedge and lilac caves,

on top of the car port in the window wells,

every summer day we tried to sort glory from horror.

We knew war and pity and death—

And then—suddenly—it was our turn for real.