Kurt Vonnegut’s Life Skating on the Edge—So It Goes

“I want to stay as close to the edge as I can without going over.  Out on the edge you see all kind of things you can’t see from the center.” —Kurt Vonnegut

Kurt Vonnegut was born on Armistice Day, November 11, 1922 in Indianapolis, Indiana. He would go on to become a veteran of another war and the experience shaped him as a human being—one of the great iconoclasts of his time, and a confirmed pacifist.

His death on April 11, 2007 at the age of 84 was, as he predicted, not an emphatic period at the end of a long life, but a mere semi-colon (he despised semi-colons.)  He died of a brain injury sustained after slipping and falling in his Manhattan apartment several days earlier.  It was the kind of comic, anti-heroic departure he could have written himself.

And Vonnegut would have noted the connection to the announcement in Washington the same day that all American troops in Iraq and Afghanistan were having their tours in the war zones extended by another 120 days.  He despised the war and the men who started it.  Leaving behind such brutal stupidity would have been a pleasure for him.

But I myself feel that our Country, for whose Constitution I fought in a just war, might as well have been invaded by Martians and body snatchers.  Sometimes I wish it had been. What has happened instead is that it was taken over by means of the sleaziest, low-comedy, Keystone Cops-style coup d’état imaginable.  (From A Man Without a Country.) 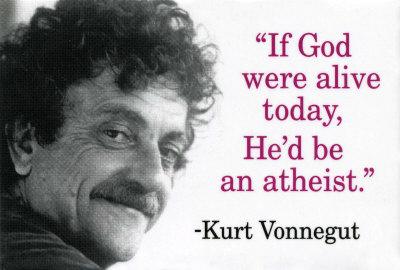 Vonnuegut's complicated and sometimes contradictory views on religion were a natural reflection of his family's German Free Thinking tradition, childhood attendance in an Indianapolis Unitarian church, his wartime trials and disillusionment, and his disgust at the rise of the Religious Right as a thin cover for racism and bigotry.  Bible thumpers returned the disdain and are behind making his books among those most banned from school curricula and libraries.
Unitarians Universalists, in our insecurity, are always making lists of “greats.”  Having dominated 19th Century American literature, there is often a kind of desperately wide net thrown to haul in contemporary writers to keep up our cultural bona fides.  Vonnegut shows up on these lists.

He was, after all, very publicly avowed Humanist, the successor to another science fiction writer, Isaac Asimov, as honorary chair of the American Humanist Association. A Man Without a Country, his last book, was something of a Humanist scream in a world corrupted by fake Christianity.  It was largely assembled from his essays in the Chicago—based socialist magazine In These Times.  We all know that Humanism has also found a home in Unitarian Universalism. 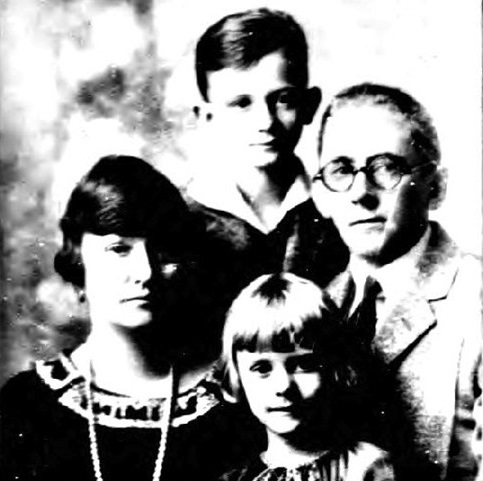 Kurt Vonnegut, Sr. and his family, wife Edith, eldest son Bernard, and daughter Alice.  Kurt, Jr. would arrive in 1922 shortly after this picture was taken.  The family came from a long line of German Free thinkers and the family attended the Indianapolis Unitarian Church for which architect Kurt Sr. designed a building.


Vonnegut was proud to claim descent from generations of German-American free thinkers, just the sort of folks who found a congenial home with the radical brand of Unitarianism espoused by Jenkin Lloyd Jones and the old Western Unitarian Conference at the turn of the 20th Century.  Vonnegut’s parents were married by a Unitarian minister and the family belonged to the congregation in Indianapolis.  Architect Kurt, Sr. even designed a building for the congregation.  Although not much of church goer later in life, he liked to tell of visiting a Unitarian congregation and hearing the minister joke about the bells peeling “No Hell! No Hell!” (surely a Universalist sentiment.)  He sometimes referred to himself as a Unitarian and was glad to be called to give the prestigious Ware Lecture at the 1986 UUA General Assembly.  He was also asked to speak on the occasion of William Ellery Channing’s 200th birthday at First Parish in Cambridge, Massachusetts.

But Vonnegut was hard to pin down—and idealist and a cynic, a humorist whose satire was tinged with the deepest melancholy of man who had been brought up to believe in human progress “onward and upward forever” only to witness the gravest savageries of the 20th Century.  He genuinely believed in the pieties of civics lessons learned at James Whitcomb Riley School in Indianapolis.  Yet he saw his father, a sensitive and creative architect, ruined by the Depression, and his mother sink into mental illness and suicide. 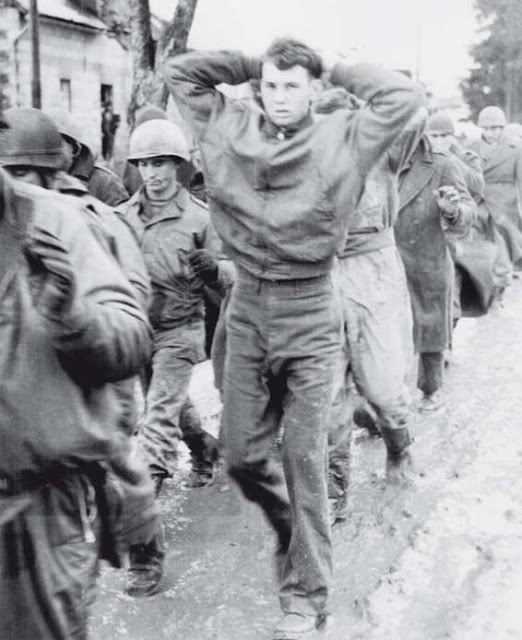 Vonnegut sans helmet was snapped with a column of GI POWS in 1944.  They young soldier looks frightened and by clasping his hands behind his head showed he was more compliant with orders than his companions.


Then it was off to war as an infantry scout for Patton’s 3rd Army.  In the confusion of the Battle of the Bulge Vonnegut was separated from his unit and wandered for several days behind German lines before being captured.  As a prisoner of war, in the defining moment of his life, he survived the Allied firebombing of the historic city of Dresden and was put to work collecting and disposing of the incinerated corpses of the old city.  This was the central event of one of his most famous novels, Slaughter House-Five, named for the actual facility in which he and his fellow prisoners rode out the fire storm.  The incident also figures in at least 5 other novels.

In post-war America he participated in the rush to corporate security when he took a public relations job with General Electric in Troy, New York.  The job didn’t last long, but the bitter experience of corporate corruption, power, and arrogance lingered.  Troy became the Ilium of several Vonnegut novels beginning with his first novel Player Piano, a savage corporate dystopia.  The book was a publishing failure in 1952, but slowly gained a cult following as paperback editions followed. 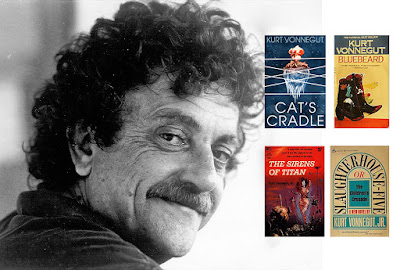 A successful author at last--Vonnegut with some of his books.  Several had been initial failures but were reprinted after the huge success of Slaughter House Five. Almost all are now considered modern American classics that somehow escaped the science fiction pigeon hole and literary ghetto.


Many of his novels involved organized religion on one hand and a drive for spiritual honesty on the other.  In Sirens of Titan gave us The Church of God the Utterly Indifferent.  In Cat’s Cradle it was the transparently fraudulent, but serenely comforting—and perhaps actually saving—Bokononism. God Bless You, Mr. Rosewater even distills what might be called a theology of atonement, forgiveness, and kindness.  In it Eliot Rosewater says:

Hello, babies, welcome to Earth.  It’s hot in the summer and cold in the winter.  It’s round and wet and crowded.  At the outside, babies, you’ve go about a hundred years here.  There only one rule that I know of, babies—‘God damn it, you’ve got to be kind.’

Vonnegut thought so much of that last passage he repeated it in his swan song A Man Without a Country. 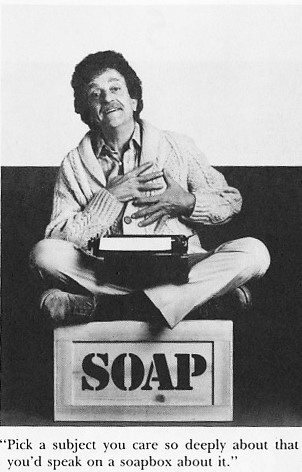 He had his heroes.  His fright-wig hair and droopy mustache were surely homage to Mark Twain (for whom he named a son) and Albert Einstein.  He admired Abraham Lincoln of whose speech attacking the Mexican War he wrote “Holy shit! And I thought I was a writer!” He paired Jesus and Socialist—and fellow Terre Haute native—Eugene V. Debs.  He liked to quote Debs, “As long as there is a lower class, I am in it.  As long as there is a criminal element, I am of it.  As long as there is a soul in prison, I am not free,” and follow up with the Beatitudes. 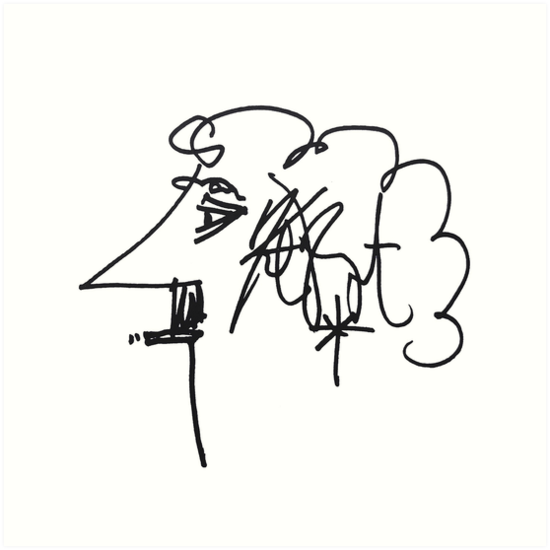 Vonnegut in later life used variations of this to illustrate his books and to sign letters and autographs.


Vonnegut was a fearless opponent of war and injustice—any war and all injustice.  He despised hypocrisy.  He despaired for humanity.  People like that are hard to come by.