Revisiting The Eternal Paris of the Imagination—Murfin Verse 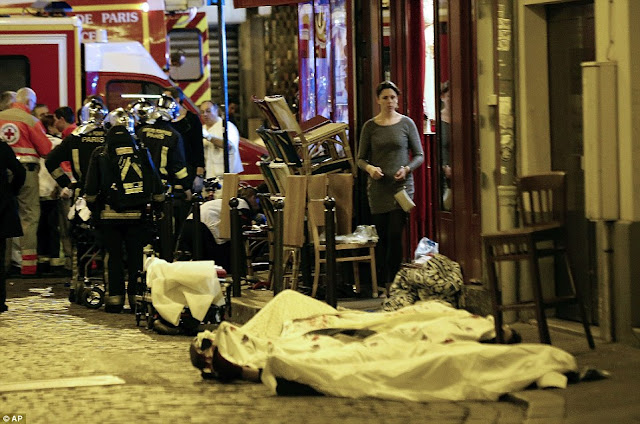 During a lull in the post-attack chaos in Paris a stunned survivor surveys the carnage.

Note—Six years ago on unlucky Friday the 13th the terrorist attack on Paris nightspots teeming with attractive young people including those getting down to a loud American death metal band both shocked the world and set off a controversy over the relative worth of some victims vs. those from swarthier or more remote parts of the world and internet bickering over the propriety of selective grief.  On the next Sunday I scribbled a poem before church services which I read to semi-stunned silence.  This is the post I put up reflecting on the terror, telling that story, and, of course, the poem. 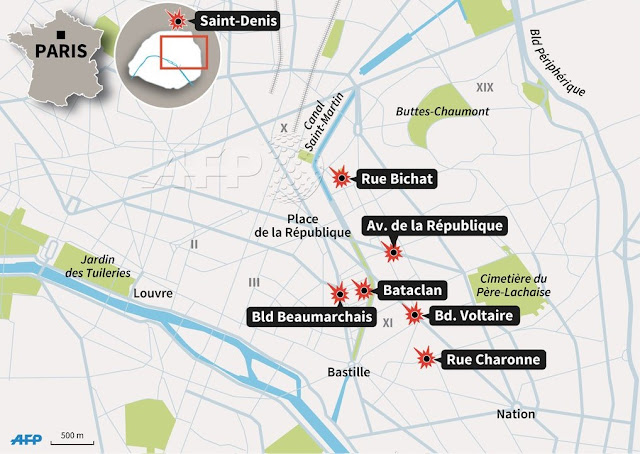 Coordinated ISIS shootings and bomb blasts left 130 people dead and hundreds wounded across Paris, most of them young people out for a night on the town.

What a depressing collection it will make.  So many poems written about war and terror, murder and stupid death.  So much outrage, pity, sorrow, and confusion.  Poems written after the gore and red splatter.  Watching the coverage from Paris unfold on the TV Friday night with waves of disgust and horror, I swore not again!  I have nothing left to say.  All my previous words flayed at the howling darkness and were swept away with no notice or affect.  Murfin, thy name is futility. 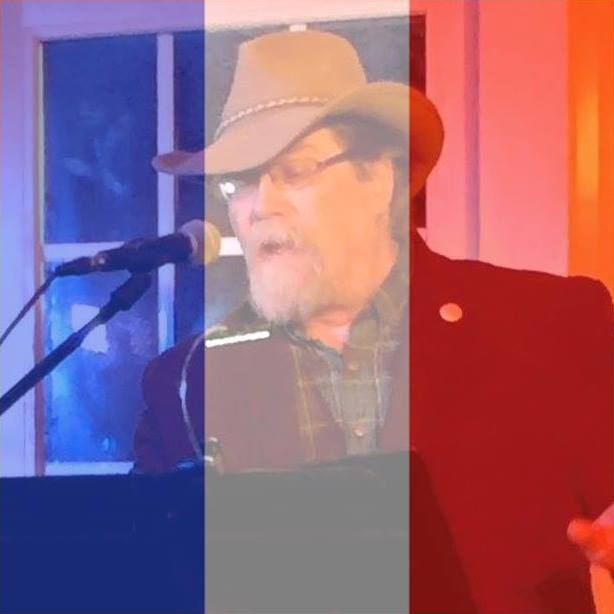 The Facebook profile picture that set off criticism and controversy.

So, I simply added a commemorative graphic meme to my Facebook page and shortly after used that gizmo that layered the French Tri-Color over my profile photo.  I kept my council and I grieved.

Then I found myself scolded and shamed, along with others who had expressed sorrow and solidarity.  And not just from the Right Wing vampires who tried to paint our hands with blood because we had not cheered and endorsed the pre-emptive murder of millions.  I expected that.  No, this sneering scorn was turned on us by allies, some much beloved, some with Reverend before their names.

Why, they asked accusingly, did you not decorate your page with the Cedar of Lebanon for the dead in Beirut just the day before, or weep for Baghdad the week before that, or the plane load of Russian tourists scattered over the Sinai, or the Nairobi university students last spring?  Curiously they failed to add the Doctors Without Borders hospital, refugee camps, or wedding parties blown up by American drones. 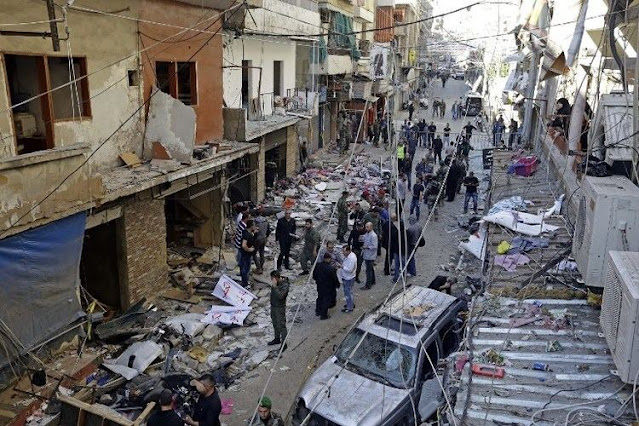 The day before the Paris attacks, ISIS terrorists also bombed Shia neighborhoods in Beirut killing 43 and maiming hundreds.  American and European media reacted to the atrocity with much less attention.  Far fewer social media posts expressed solidarity with the people or Lebanon.  Was the difference racism, anti-Muslim bias, or simply empathetic failure.

For our sympathy for Paris we were accused of, at best, hypocrisy and at worst with a flagrant display white privilege if not outright racism.  When others protested the characterization, they were charged with the new silencer of displaying White fragility.

Look, I get it.  I have written similar things, made similar charges when my self-righteous indignation was in full display, usually just after some ignored outrage.  This is a case where all lives certainly matter.  Night clubbing young Parisians and satiric journalists are no more worthy than a Lebanese grandmother, or even of a masked militant.  All have earned their mourning.  All deserve more than just our passing pity.

But denying our particular sorrow is like telling us we cannot weep for our mothers because a homeless person has been laid in a potter’s field un-mourned.   Beirut, Baghdad, and Nairobi all are written on the hearts of those who love and know them.  They are not more worthy Paris.  I would be a better man, perhaps, if I knew those cities as I have known Paris from afar. 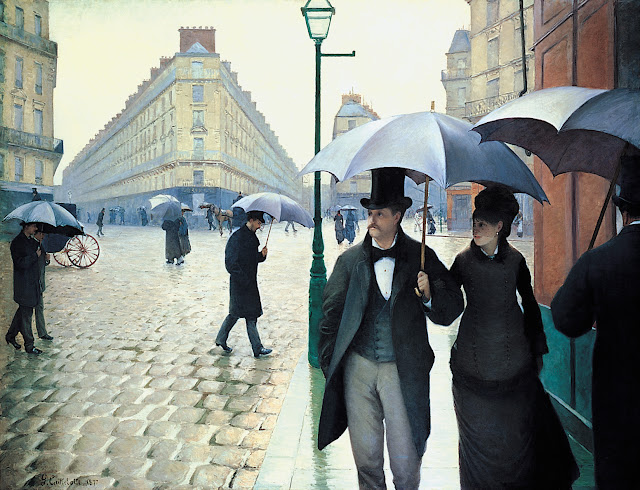 I can’t help it.  I know Paris.  Not that I have ever been there or have any realistic hope of ever going there.  I am the most provincial of Americans.  I cannot speak the language and stumble helplessly over its fluid words when I encounter them.  I have no intimate French friends or family.  But to my surprise, I know the eternal Paris of the imagination.

So, on Sunday, the Ides of November, digesting all of this, I sat down to write what I know.  It is less a poem than a litany.

Allow me the grace to grieve for this without your haughty disapproval. Le Dome café on Boulevard Montparnasse in 1920, hangout  for Hemingway and expat writers and artists.

The Eternal Paris of the Imagination

Oh the eternal Paris of the imagination!

of Cyrano and balconies

of D’Artagnan, Athos, Aramis, and Porthos.

The Paris of the Bastille, Liberté, égalité, fraternité

of Bonaparte and Imperial bees,

of Empire waists and ‪décolletage.

The Paris of the barricades and sewers

of Jean Val Jean and Javert,

of Republicans and Monarchists,

of June Days and Bonaparte the Second.

The Paris of goose stepping Prussians in spiked helmets

of the Communards and National Guard,

of Louise Michel and firing squads,

of corpses with calloused hands.

The Paris of the Exposition Universelle and Gustave Eiffel

of Bernhardt and La Comédie-Française,

of Mimi and La Boheim.

The Paris of Dreyfus and Zola,

of Balzac and Jules Verne,

of Renoir, Monet, and Degas,

of Le Grande Jatte and Rodin.

The Paris of Lavoisier, Pasture, and Curie

of the brothers Montgolfier, Lumière, and Renault,

of daguerreotypes and other marvels

of Louis Blériot and monoplanes.

The Paris of the Moulon Rouge and le Chat Noir,

of the Can-Can and Apache,

of the Folies Bergère,

of Collette and Gigi.

The Paris of the Poilus, blue overcoats and helmets,

of the Taxis de la Marne in long lines,

of Lafayette, we are here,

of Versailles and the carving of the World.

The Paris of the Moveable Feast

of expatriates, Stein and Alice B.,

of Hemingway, Fitzgerald, and Joyce,

of cubists and surrealists.

The Paris of Chevalier and Josephine Baker,

of Dajango Reinhardt and Stéphane Grappelli,

of Piaf, the Little Sparrow.

The Paris that Rick and Elsa will always have,

of Nazis and collaborators,

of the Resistance, berets, and submachine guns,

of Liberation and flowers.

The Paris of Existential angst,

of Sartre and Anais Nin,

of an American in Paris,

of Belmondo, dangling Gauloises, and Bardot.

The Paris of Haute Couture and Haute Cuisine,

of Channel and Dior,

of cafés and bistros,

of discotheques and punk rock.

The Paris of DeGaulle and OAS bombs,

of strikes and marches,

of festivals and fireworks,

of flags and fantasy.

Paris of the eternal imagination

let me weep with you today.