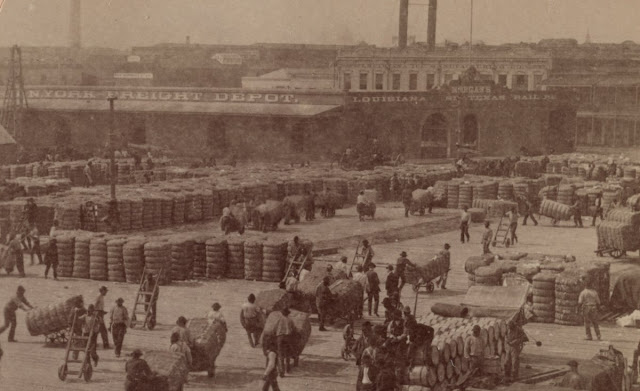 A year before the strike dockworkers loading and unloading goods--mostly bales of cotton--on a New Orleans wharf.

New Orleans was always an anomaly in the South, hell it was unique in all the United States for many reasons.  It was a cosmopolitan city ruled by the French or Spanish for most of its history and had a part of the US for only 89 years in 1892.

Many of its inhabitants were Creole, a term which originally had simply meant Europeans born in the New World, but in New Orleans had also come to infer those of mixed racial heritage.  The city was long the home not only of slaves, but of a large, and sometimes quite prosperous, Free Black population.  Free Blacks, slaves and their descendants mixed with the European population.  In addition, New Orleans was unique among southern cities in attracting large numbers of European immigrants in the late 19th Century in the same way that industrial cities of the North did.  These included large numbers of Irish, Germans, Italians, and Sicilians.  The result was a unique cultural stew and a mixing of races and ethnicities in ways unheard of elsewhere in the South.

New Orleans was also the second busiest port city in the country after New York. Through it passed the agricultural production of the heartland—wheat, corn, and livestock from the great drainages of the Ohio, Mississippi, and Missouri—plus raw materials like lumber from the North Woods and coal from the fields of Tennessee, Kentucky, and Illinois.  Most importantly of all, cotton by the bale for the hungry mills of the world and other bulk Southern crops, sugar and rice.  In the other direction, disgorged from steam and sailing ships of the world was a stream of manufactured goods, luxury imports, and tropical produce. 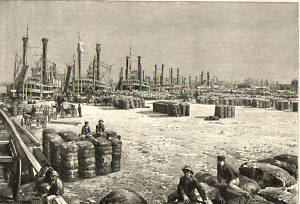 River boats line up to disgorge cotton.  The docks were the critical pinch-point to strangle the city's commerce and unions of the Triple Alliance successfully resisted all efforts to divide them by race.

In this atmosphere, despite the steadfast opposition of employers and government, labor unions took root and flourished.  Workers maintained strong lodges of the Knights of Labor and, particularly in the labor intensive industries serving trade where white and Black workers often labored side by side, had a tradition of solidarity.  The Knights with their old lodges had faded away, but the fledgling American Federation of Labor (AFL) and its craft unions were quick to take its place by the early 1890s.

Early in 1892 Streetcar Conductors won unprecedented gains, including an 8 hour day and a closed union shop.  The later was regarded as particularly important because it prevented employers from squeezing union workers out by replacing them with scabs.  That victory spurred a frenzy of organization around the city.  By late summer 30 newly charted craft unions joined existing ones to form the 49 union-strong Workingmen’s Amalgamated Council that represented more than 20,000 workers.

Three of the largest unions—and those most essential to keeping goods and trade moving—were integrated.  These included the Teamsters, Scalesmen, and Packers.  Together they formed the Triple Alliance at the heart of the movement.

On October 24, with the full support of the full Amalgamated Council, the Triple Alliance walked out demanding a 10 hour day, overtime pay, and the closed shop. Commerce in the city ground to a halt. 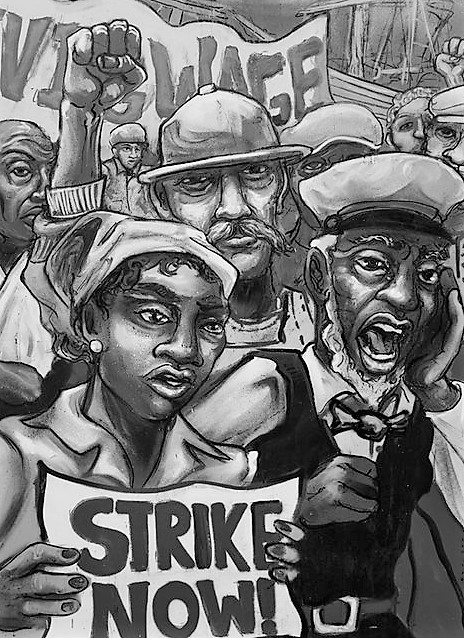 Black workers, especially from the  Teamsters, were key to the strike.

Employers banded together under the leadership of the Board of Trade to try to break the strike.  They had the support of major railroads serving the city as well as river and ocean going shippers.  A large sum of money was raised to beat the strike and the Board of Trade appealed to the Governor to call out the Militia to intervene.

The local press, solidly behind the owners, flooded the city with lurid accounts of roving bands of marauding Blacks threatening and insulting women and children.  Every effort was made to divide the strikers by race.  They also charged wide-spread violence. 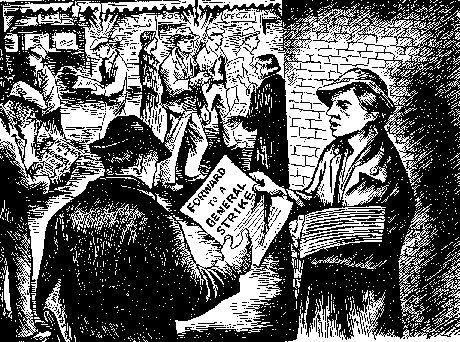 Leafleting in support of the Strike.

But the strikers were well disciplined.  They maintained picket lines but allowed no violence.  And they refused to be divided by race.

Then the Board of Trade tried offering to negotiate with the Scalesmen and Packers, who were white-led, while refusing to deal with the Teamsters, dominated by Blacks.  The Packers and Scalesmen both met and passed resolutions vowing to stay out until the Teamsters got a settlement on an equal basis with them. 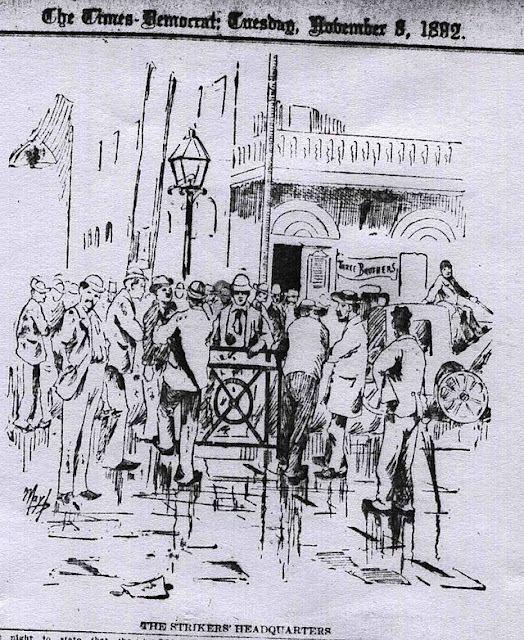 Workers milling around strike headquarters was the most a local newspaper could show despite claims of violence.

As the strike dragged on into its second week other member unions of the Amalgamated Council demanded a General Strike in support of the Triple Alliance.  A committee made up of the leaders of the Cotton Screwmen, Cotton Yardmen, Printers, Boiler Makers, and Cab Drivers began to plan for a strike.

Just the possibility of a strike encouraged many independent and smaller employers to appeal to the Board of Trade to open serious negotiations with the strikers.  In fact, a tentative agreement was announced, but hard liners on the Board sank the pact.  On November 8, just as they had threatened, all member unions of the Amalgamated Council went out on strike.  They were even joined by unorganized workers.  Utility workers, newly organized, joined the strike with their own demands and soon the gas plant was closed down, plunging the city into darkness.  Without Streetcars retail clerks and office workers could not get to their jobs.  Food deliveries ended and within a day or two most shops were without supplies.

The Board of Trade and newspapers doubled down on racial scare stories and lurid accounts of violence and rioting in the streets.  But New Orleans residents could observe for themselves that the city was peaceful and calm, if at a commercial standstill.  Even special agents of the Board, roaming the streets to identify and document violence, could not find any. A call for “special deputies” to be used as strike breakers resulted in only 59 volunteers, hardly enough to force thousands back to work.  Employers then began arming and training their clerks and foremen and offered to pay the State for the cost of raising the Militia. 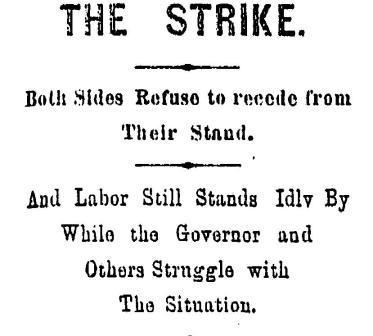 A headline reflected the frustration of the local power structure.


The Mayor declared martial law but could not enforce his orders.  On November 10 Democratic Governor Murphy J. Foster did call out the Militia.  But when officers arrived and reported no riot or disturbance, the governor had to rescind the order the next day.

As banking activity dropped to less than half of its pre-strike levels, a sure sign of the effectiveness of the strike, the Board of Trade reluctantly agreed to accept binding arbitration. They even had to agree to face-to-face meetings with union leaders both white and Black.

After 48 hours of grueling negotiations, the Board agreed to the 10 hour day and overtime, but not to recognition of the union shop for the Triple Alliance unions.  Most other unions got comparable concessions.

The unions reluctantly agreed, feeling that they had proved their power and could enforce the agreements at will, even without official recognition.

Workers were barely back on the job when the Board of Trade sought an investigation and prosecution of the union by Federal Authorities for allegedly violating the Sherman Anti-Trust act by uniting “in restraint of trade.”  A Federal judge ordered an injunction against the unions, which was moot because their members were already back on the job.  None-the-less AFL leaders appealed the decision.  After several years of legal wrangling, the Justice Department quietly withdrew the suit.

In many ways it was one of the most successful General Strikes in American history.  Not only did the united power of the unions force win many key demands, but they also remained strong enough to make sure that the terms of the settlement were adhered to long after the strike ended.  And the model of the power of labor solidarity across racial lines was powerful.  Also key was the unity of skilled tradesmen with the semi-skilled and unskilled laborers of the Teamsters and Packers.  Unfortunately, it would be all too often forgotten in the next decades. 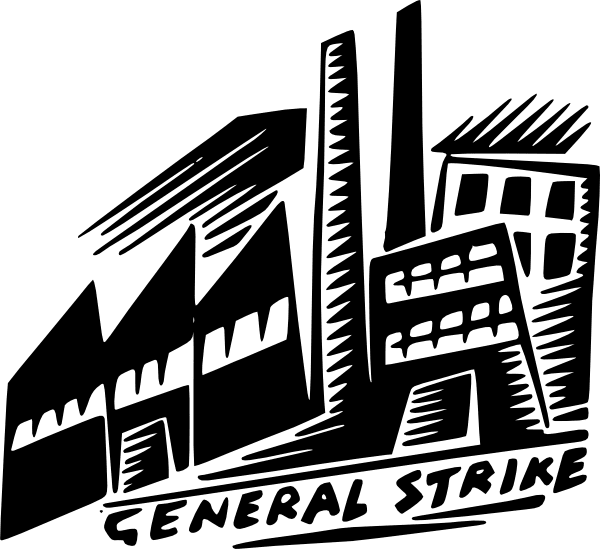 But national AFL leaders like Samuel Gompers considered the strike a failure because it did not secure formal union recognition—in their eyes by far the most important objective of the strike.  Some labor historians trace the resistance of the AFL to most future calls for a general strike to this failure.  In fact, in the next few years, the AFL largely tried to retreat from strike action of any kind unless as an absolute final resort, and instead pursued a strategy of accommodation with employers through the Civic Federation.

Posted by Patrick Murfin at 6:14 AM