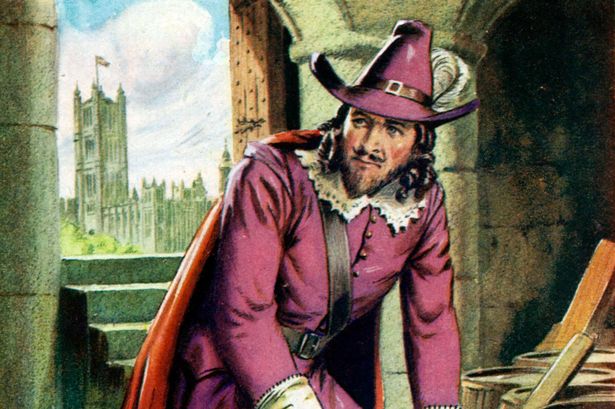 A popular image of Guy Fawkes assembling barrels of gun power for his plot against Parliament and King James I.

Tonight is Bonfire Night across the Puddle, traditionally a rowdy celebration of the day Guy Fawkes got caught trying to blow up Parliament on November 5, 1605.  Originally celebrated on the first anniversary as an official Thanksgiving Day for delivering the King and Parliament from the Catholic plotters, it became an annual official holiday until that status was finally dropped in 1859 because of the virulent anti-Catholic tone of the celebration.  Traditionally effigies of Fawkes were burned on bonfires.  Later fireworks also became popular along with considerable public revelry and occasional outbreaks of vandalism aimed at Catholic churches and schools.

In recent years the celebration has tamed and faded.  Municipalities clamped down on celebrations limiting them to officially organized bonfires.  Previously children would haul Fawkes effigies around town for days collecting wood for private bonfires or money to buy it. Fires were often built on city streets and on vacant lots.  Many locations also moved commemorations from November 5 to a weekend to keep interference of commerce to a minimum.   But the two biggest blows were a national ban on the sale and possession of fireworks by individuals and the encroachment of the Americanized commercial Halloween just a few nights earlier.  None-the-less, across England, in Ulster, and to a lesser extent in Scotland and Wales, there will still be celebrations. 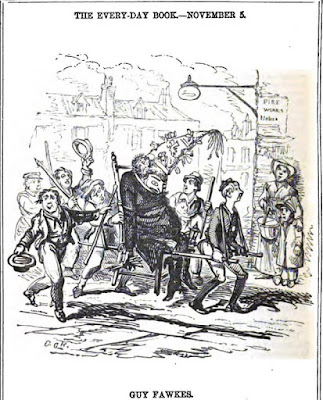 
Depending how you look at him, the Guy Fawkes was either a religious fanatic who ran away to become a combatant in foreign wars and returned home to become a terrorist—sort of like a 17th Century Catholic al-Qaida—or a swashbuckling resistance fighter depending on your outlook.

Fawkes was born in 1570 to a respectable Protestant family in York.  Members of this mother’s family were Recusants—those who refused to worship in the Established Church and were suspected of being Catholic.  His father died when the boy was eight and several years later his mother remarried a Catholic.

He attended St Peter’s School in York, which was known to have Catholic sympathies and several of his classmates were subsequently prosecuted as Recusants and some became Priests.  Exactly when Fawkes personally converted to Catholicism is a matter of some debate, but he was surely practicing in secret by the time he took up the career of a soldier and entered the service of the Catholic noble the Viscount Montagu.

In 1591 Fawkes sold his estate and traveled to the Netherlands to enter the service of Spain against the Protestant Dutch Republic.  He also served Spain in its war with France and so distinguished himself at the siege of Calais in 1596 that he was promoted to Captain in 1603.  The same year he traveled to Spain and petitioned the court of Phillip III for support in raising an army to overthrow James I and restore the English and Scottish monarchies (united under James) to Catholic hands.  But Phillip was then pursuing a peace policy with England and, although sympathetic, refused to help.

Sometime in 1604 Fawkes, now using the Italian form of his name, Guido, returned to England and soon connected with Robert Catesby who had already begun to assemble a small cadre of Catholics to undertake the assassination of King James and place his nine-year-old daughter Princes Elizabeth on the throne as a Catholic ruler. Fawkes first met the rest of his fellow conspirators on May 20, 1604 at the Duck and Drake, in the fashionable Strand district of London.  The other men were impressed with Fawkes both personally and for his confidence and military skill.  And having been out of the country for years, he would not be recognized by local authorities.  Fawkes confirmed what Gatesby already knew, that the plotters would not receive help from Spain.  They determined to press on.

Fawkes secured rooms adjacent to Parliament.  The plotters may—or may not—have begun an attempt to dig a tunnel from the house cellar.  If so, they abandoned the project when they discovered that the land lady had an undercroft—a cellar storage room—directly under the House of Lords.  Hardly believing their good fortune, they leased the space arousing no suspicion, and began smuggling in barrels of gunpowder, which they hid under firewood and coal.  Eventually, more than thirty barrels, more than enough to blow the building sky high, were hidden there. 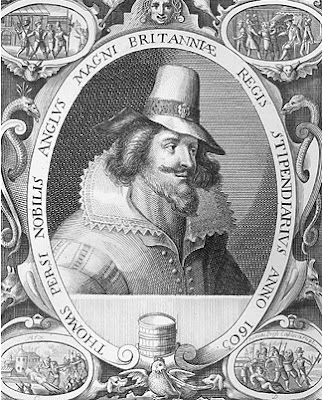 An engraving of Guy Fawkes taken from life drawings after his arrest.


Although the gun powder was in place by August 1602, the plotters had to wait until the opening of Parliament when James and the Court would be in attendance.  This was delayed several times because the plague was making one of its periodic re-visits to London.  In the meantime, Fawkes was to guard the stash and be prepared to light the fuse to ignite the explosion when the time was right.  When the bombs went off and the King was dead, other plotters would raise a rebellion in the Midlands to put Elizabeth on the throne.

But more than twenty people were actively involved in the plot—far too many to keep such a secret for long.  At least one of them was worried about Catholic nobles who might be killed and sent an anonymous warning to Lord Monteagle to stay away from the upcoming ceremonies because “... they shall receyve a terrible blowe this parleament.”  Monteagle showed the letter to the King who ordered that all of the cellars in and around Parliament be searched.  On November 5, the King’s men discovered Fawkes coming out of the undercroft.  Upon arresting him, they uncovered the barrels of gunpowder hidden in the room. 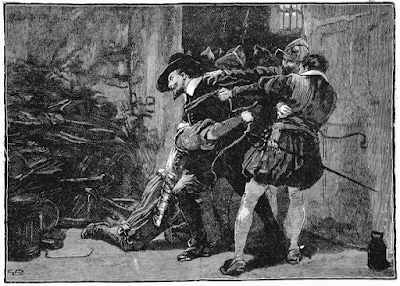 
Under questioning in King James’s presence, Fawkes used the alias under which he had secured the rooms, John Johnson, but admitted to being a Catholic and planning to blow up Parliament. He would not, however, reveal the names of any associates.  The king ordered the prisoner tortured.

He was taken to the Tower of London and subjected to several sessions of torture of increasing severity.  He held mum through the first, but slowly began to crack.  On November 7, he admitted his identity.  On November 8 and 9 he began to name names.  He signed a confession in a barely legible scrawl, a testimony to the severity of his suffering. 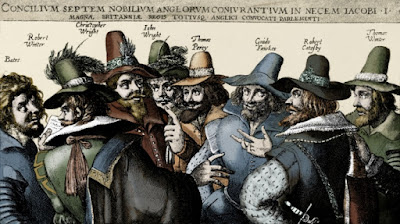 Guido Fawkes and his co-conspirators.


It did not take long to round up some of the other conspirators.  On January 27, 1606 Fawkes and seven others were placed on trial at Westminster Hall.  The outcome was never in doubt.  All were convicted of High Treason and by custom condemned to be drawn and quartered, a gruesome punishment in which the prisoner’s genitals were cut off and burnt before his eyes, bowels and heart removed, before final decapitation. Then the dismembered body parts would be displayed to become the “prey for the fowls of the air” and any remaining parts would be scattered across the kingdom.

On January `31 Fawkes and three other were taken to a high scaffold in front of Westminster Hall.  The first three suffered as planned while Fawkes was forced to watch.  Then he calmly mounted the scaffold and made a brief statement.  Then, he managed to break free and dive from the platform, breaking his neck and dying almost immediately.  He escaped the pain of being drawn and quartered, but not to be denied, his executioners finished the job on his corpse.

The following November 5, the King proclaimed the Thanksgiving Act establishing the custom of Bon Fire Night.

The custom accompanied the Puritans to New England.  By the early 1700’s it was known as Pope’s Day in Boston.  Despite the fact the few in the city had ever even seen a Catholic, it was a day of riotous disrespect.  Parades were organized in which not only effigies Guy Fawkes, but the Pope himself was carried to bonfires to be burned.  These parades were organized by the apprentices and laborers of the town.  Eventually there were rival parades on the North and South sides, often accompanied by semi-ritualized gang fights between the groups.  Yet out of this unlikely start patriots led by Samuel Adams began to organize the two groups into sections of his Sons of Liberty, channeling rowdyism into a new and unexpected form.  Despite this, George Washington had to ban Pope’s Day observances in the Continental Army out of respect for Catholic troops from Maryland and because the celebration inferred an allegiance to the Crown. 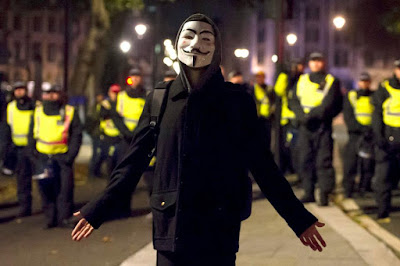 Guy Fawkes masks have become a staple of street demonstrations around the world.


More recently the move V for Vendetta based on a D.C. Comics limited series and starring Natalie Portman, Hugo Weaving, Stephen Rea, and John Hurt released in 2005 became a cult hit.  In it a band of rebels against a future dystopian Fascist British regime are led by a charismatic and mysterious figure known only a V who always wears a stylized Guy Fawkes mask.  Those masks spread like wildfire across Europe along with a wave of massive anti-austerity street demonstrations and strikes.  On the other side of the Atlantic they were popular during Occupy Movement marches and demonstration.  The masks were widely adopted by anarchist militants and among the Anti-fa.  They turned up on mostly white supporters at Black Lives Matter actions where some of the masked figures broke from peaceful demonstrations to smash windows, over-turn cars, and battle police.  The mask was also used for video pronouncements by Anonymous.

There is more than a little irony in that the image of Guy Fawkes—the Catholic plotter and Royalist—became a revolutionary street radical icon.

Certainly nothing would have surprised him more.

Posted by Patrick Murfin at 5:15 AM