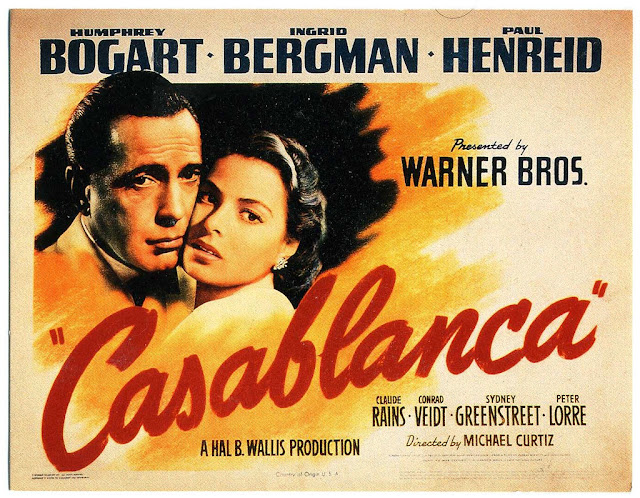 Although it had an official premier at the Hollywood Theatre back on November 27, 1942 to make it eligible for the 1943 Academy Awards, Casablanca went into general release 79 years ago today on January 24.  That coincided with the last day of the Casablanca Conference with President Franklin D. Roosevelt and British Prime Minister Winston Churchill which mapped out the general strategy for the Western Front in Europe and was a little more than two months since the city was liberated by the British in Operation Torch.  Both events made the title instantly significant to war-time movie goers.

Although Casablanca misses the top ranks of most lists of the “greatest” films of all time, it never fails to score at or near the top of lists of favorites.  Never intended to be great art, it none the less is the epitome of how the crass movie-by-committee method of the Golden Age of the American studio system could often achieve it despite of itself.

Now a revered classic, the production was troubled and chaotic, and the film was only moderately successful in its first run.  But it swept the 1943 Oscars with eight nominations and three wins including Best Picture, Michael Curtiz for Best Director, and Best Screenplay for Julius J. Epstein, Philip G. Epstein, and Howard Koch.  Humphrey Bogart was nominated for his first romantic lead as the jaded café owner Rick and Claude Raines got a nod as Best Supporting Actor for his role as the Vichy French policeman Captain Louis Renault.  Somehow the luminous Ingrid Bergman was denied a nomination as Ilsa.  From then on, its reputation has only continued to grow. 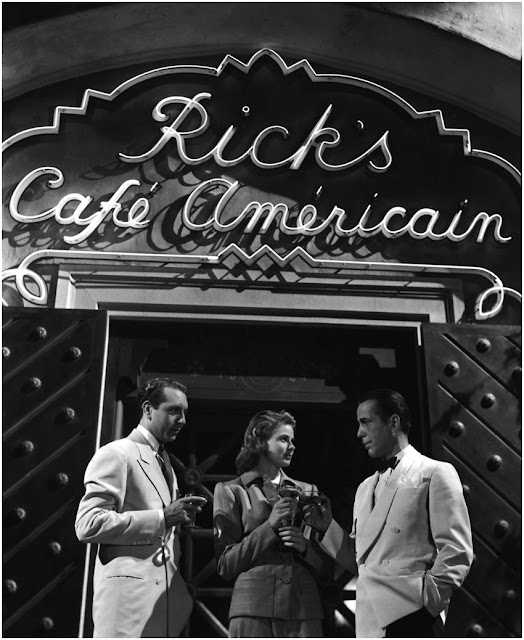 Everybody comes to Ricks, including freedom fighting refugee Victor Lazlo and his wife Ilsa--a woman with a past.

Warner Bros. producer Hal Wallis bought Everybody Comes to Rick’s by Murray Burnett and Joan Alison, in January 1942 for $20,000, then a Hollywood record for an unproduced play.  He assigned the script to the twin Epstein brothers who made major changes in the story and characters.  Veteran writer Koch was brought in later.  In addition, several other un-credited writers contributed to the script including re-writes by Casey Robinson.  The script was in continuous revision throughout shooting.  Bergman later said she never knew who Ilsa would pick in the love triangle until handed a shooting script on the set of the final scene.  The films memorable final line “Louis, I think this is the beginning of a beautiful friendship,” was added weeks after principal shooting was completed.

Curtiz, a Hungarian Jew who had relatives still trapped in Hitler’s Europe, was tapped as director only after the first choice, Warner’s ace William Wyler, was unavailable.

Several actors were considered for the roll of Rick.  Ronald Reagan was mentioned in early press stories on the film, but this was mostly just to keep his name in the papers.  Warner Bros. knew that he would enter the service before shooting began.  Bogart was a long-standing member of the Warner stock company best known for his tough guy and gangster rolls often in support of top studio stars James Cagney, Edward G. Robinson, and George Raft.  But the Maltese Falcon and High Sierra had recently moved him up to the top ranks of studio assets.  With some trepidation he was cast in the unconventional romantic lead.

Likewise, Ann Sheridan—who would have played the female lead as an American as envisioned in the original play—and European beauties Hedy Lamarr and Michèle Morgan were considered before Swedish born Ingrid Bergman was cast as Ilsa.  Austrian actor Paul Henreid fresh off a triumph as a suave leading man to Bette Davis in Now, Voyager, was cast as the noble Eastern European resistance hero Victor Laszlo, Ilsa’s husband.  Just as he feared, the stiff Laszlo typecast him and prevented him from becoming a major leading man.  The large cast also included Warner standbys Raines; Conrad Veidt, an anti-Nazi German who made a Hollywood career of playing Third Reich villains; and Sydney Greenstreet and Peter Lorre, both of whom had appeared with Bogart in The Maltese Falcon. 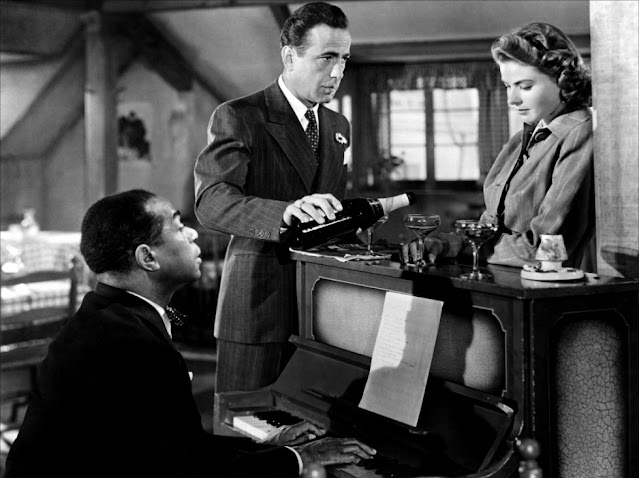 Rick and Ilsa in Paris,  "Here's looking at you, kid."

Max Steiner scored the film, but its most memorable musical moments were provided by Rick’s piano playing pal Sam, played by Dooley Wilson, and by the stirring singing Les Marseilles at a critical moment.  Wilson made an instant classic of As Time Goes By, a ballad of middling popularity by ‎Herman Hupfeld that had been floating around since 1931. 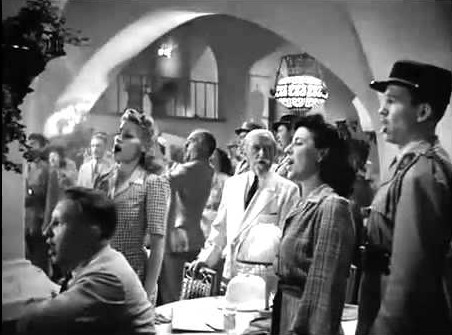 A rousing highlight of the film was the spontaneous singing of  Les Marseilles at Rick's as Nazi officers look on.

The melodramatic plot focused on a ridiculous MacGuffin. Letters of Transit were blank documents signed by a Vichy general that supposedly would allow the bearer to travel freely and were the magic documents needed by the refugees crowding Rick’s Café Américain in the French Moroccan city of Casablanca to get to neutral Portugal and from there perhaps to the safety of Britain or the U.S.  Two of these letters fall into the hands of proprietor Rick Blaine, a cynical American expatriate with a shady past just as his former lover, Ilsa, arrives with her husband Victor.  In flashback we learn of a near idyllic romance between Rick and Ilsa in Paris which ends when she disappears as German troops occupy the city.  She had never told him of her marriage or left any message as to why she did not meet him at the train station as planned to escape the city with him.

The rest of the film revolves around the search by Captain Renault, at the instance of the Nazi officer Major Stasser, for the valuable stolen letters of transit, and with the moral dilemmas of Rick and Ilsa.  In the end the French cop, the crusty American whose “shady past” turns out have been running guns to Ethiopia to be used against the invading Italians and fighting on the Republican side in the Spanish Civil War, and the wife torn between two loves each makes a sacrifice for the greater good. 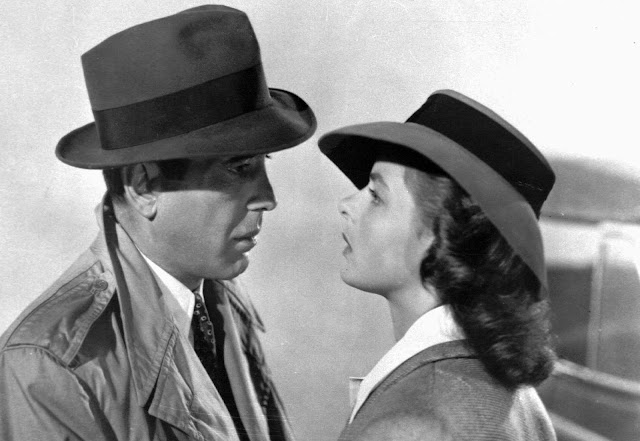 Rick explains things to Ilsa at a fog shrouded airport.

Rick explained it to Ilsa in the fog at the airport:

Inside of us, we both know you belong with Victor. You’re part of his work, the thing that keeps him going. If that plane leaves the ground and you’re not with him, you’ll regret it. Maybe not today. Maybe not tomorrow, but soon and for the rest of your life… I’ve got a job to do, too. Where I’m going, you can’t follow. What I’ve got to do, you can’t be any part of. Ilsa, I’m no good at being noble, but it doesn’t take much to see that the problems of three little people don’t amount to a hill of beans in this crazy world. Someday you’ll understand that.”

Many years later writer Julius Epstein would say that the script contained, “more corn than in the states of Kansas and Iowa combined. But when corn works, there’s nothing better.”   It certainly worked in Casablanca! 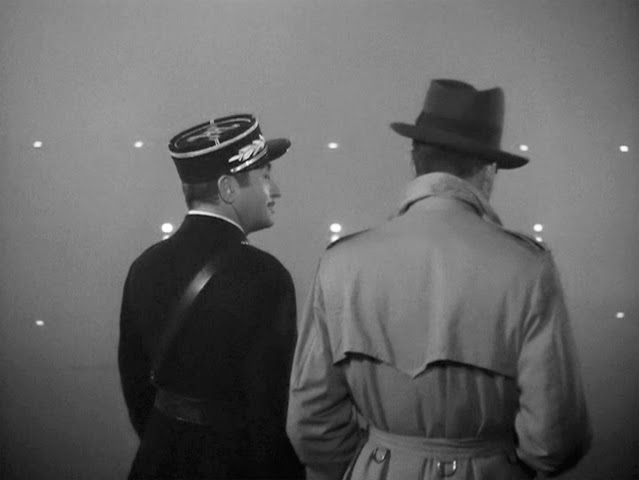 In an unexpected twist the hero does not walk into the sunset with his great love but saunters into the fog with his erstwhile enemy on the way to join the Free French.

Posted by Patrick Murfin at 7:21 AM