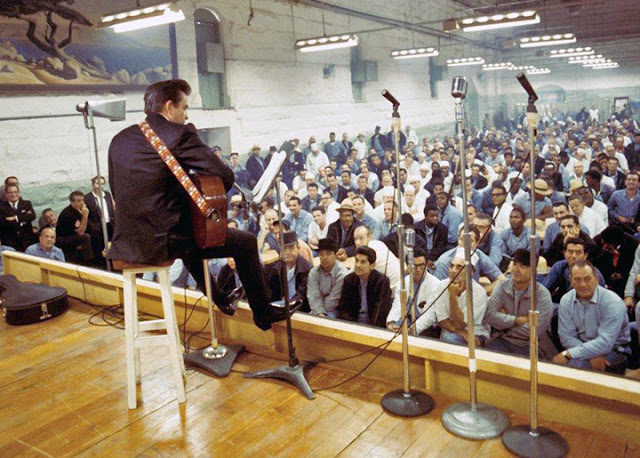 For much of the Folsom concert, Cash set on a stool at the front of the stage, his feet propped up on a rail, as close to his audience of cons as he could get.

Today is the anniversary of the two greatest concerts you could never buy a ticket to.  On January 14, 1968 Johnny Cash, the Tennessee Three, June Carter, Carl Perkins and The Statler Brothers played two shows at an unusual venue—California’s Folsom Prison.

The shows were hastily arranged by Cash and executives at Columbia Records for the express purpose of making a live recording in front of an audience of inmates.  The idea was rooted in Cash’s 1955 Sun Records single Folsom Prison Blues. 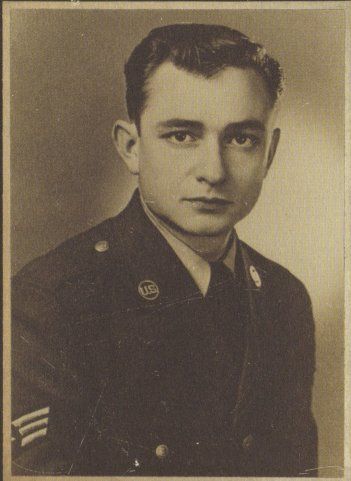 Johnny Cash as an Airman.

Cash was inspired to write the song while he was still in the Air Force in Germany.  His unit was shown the 1951 film Inside the Walls of Folsom Prison, a B-movie starring Steve Cochran, a dark haired actor who bore more than a passing resemblance to Cash himself.  Inspired, Cash wrote the song, borrowing much of the melody and some of the words from Gordon Jenkins’s Crescent City Blues on his long-form concept album Seven Dreams.  Jenkins’s contribution was unaccredited on the first single release but included in later issues.

The song was a minor hit for Cash but became part of his standard stage show.  It also gained a cult following among inmates, who frequently wrote to the star and asked for him to play at their institutions.  Cash made a point of replying—or making sure his staff replied—to all the prison inquiries and did begin doing occasional prison shows.  The first was at Huntsville State Prison in Alabama in 1957.

As Cash’s career progressed he began to cultivate a persona as an outsider, a rebel, a potentially dangerous man.  His songs and prison performances created a wide-spread impression that he had been in prison himself—a notion he did very little to discourage.  Indeed, like his identification with the struggle of Native Americans caused him to claim Cherokee blood, this image became so firmly rooted in his mind that he began to more than half believe it himself. 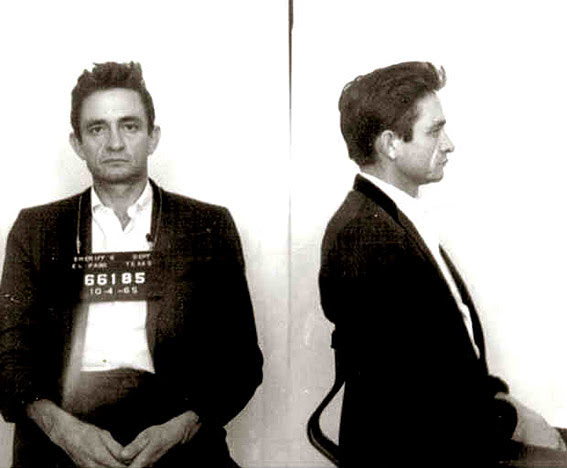 Cash's mug shot for his 1965 Mississippi arrest for picking flowers in a park.

In fact, Cash had spent about three nights in jail, all in drug related incidents.  One case was for trespassing to pick flowers in a Starksville, Mississippi park in 1965 while stoned. He would later sing about that on a recording made later at San Quentin.

In 1969 Cash had hit bottom in a long struggle with pills—amphetamines and downers—as well as alcohol that had damaged his career and caused the end of his first marriage.  After an epiphany deep in a Tennessee cave, he became determined to shake addiction.  With the help of his touring partner and love interest June Carter and her mother, the legendary Maybelle Carter, the singer went cold turkey on pills during an excruciating week.  He would stay sober for the next seven years but would suffer periodic relapses the rest of his life.

To rejuvenate his career, Cash wanted to follow up his deeply personal Bitter Tears, his 1964 album of songs on the plight of Native Americans and his 1965 double LP Ballads of the True West, with a live recording at a prison.  Columbia executives, then down on Cash for diminished record sales and erratic behavior during the worst period of his addiction, flatly refused.  But when the country music division of the label underwent change, Cash’s new producer Bob Johnston was enthusiastic.  Phone calls were made offering shows to official at both Folsom and San Quentin.  Folsom agreed first and the concerts were hastily arranged.

Shows were presented to inmates at 9:30 am and again at 12:00 so that engineers would have two takes on most numbers.  The play lists also varied slightly to provide more song options for the planned album.  Carl Perkins opened the show with his Sun Records classic Blue Suede Shoes and the Statler Brothers did their huge hit Flowers on the Wall before Cash took the stage. 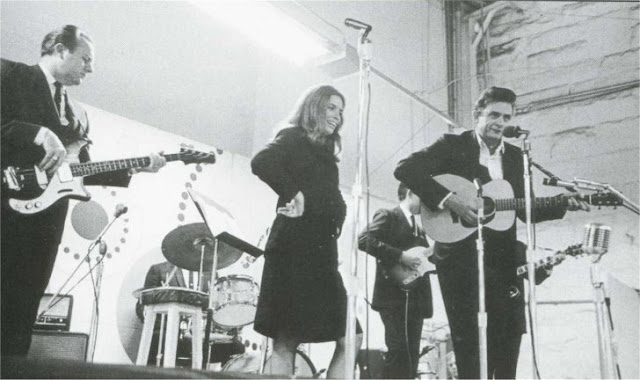 An announcer instructed the prisoners not to cheer Cash until he got on stage and opened with his signature “Hello, I’m Johnny Cash.”  Both shows opened with Folsom Prison Blues and a set of prison related songs that included The Green, Green Grass of Home, and the comic execution song 25 Minutes to Go.  June Carter, to whom Cash would propose marriage on a stage of a London Ontario concert just a little over a month later, joined him on stage for duets.  Among the other songs that Cash performed at one or both of the shows were The Orange Blossom Special, Long Black Veil, I Still Miss Someone, Stripes, and Cocaine Blues.

It took for months of production to ready the resulting album Johnny Cash At Folsom Prison.  Of 16 cuts on the album, 14 came from the first show when the musicians were fresher.  The cheering heard on Folsom Prison Blues when the line “shot a man in Reno” was added in postproduction because the inmates were careful not to cheer mentions of lawbreaking for fear of reprisals from the guards.

Columbia, which was trying to concentrate on its rock and pop catalogue did not heavily promote the record when it was released, but the album got a boost when the new version of Folsom Prison Blues quickly shot to the top of the Country music charts and was climbing the pop charts.  It suffered a setback when many radio stations pulled the song for its reference to murder in the wake of the assassination of Bobby Kennedy in April. 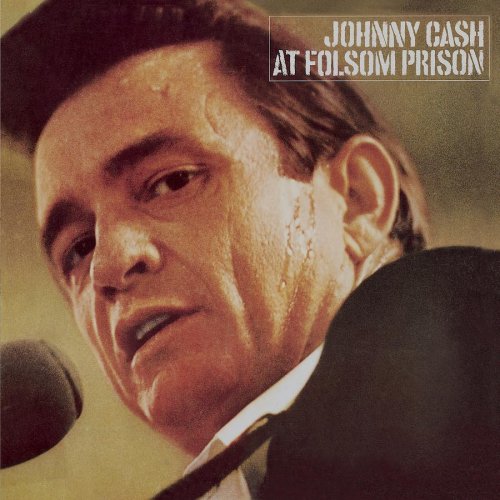 Johnny Cash at Folsom Prison is regarded by many critics as the greatest country music album of all time.

The album was greeted with unanimous rave reviews in both the country music and mainstream press.  Al Aronowitz in Life summed of the sentiment of most critics that Cash sang like “someone who has grown up believing he is one of the people that these songs are about.”

The record was a #1 Country hit and rose to 13 on Billboard’s Pop Album chart in a year dominated by the Beatles and the emergence of American psychedelic rock.  It was certified as a Gold Record for half a million copies shipped by August.  On the strength of the record’s success and cross-over appeal, ABC Television gave Cash his own prime time variety show, destined to be a legendary showcase not only for the star but for a who’s who of rising folk, country, pop, and rock and roll acts.

The original album is generally regarded as the greatest country music record of all time.  Re-released as a CD in 1999 with three additional tracks from the concerts, it scored again, this time going Triple Platinum for sales of over three million copies.  In 2008, Columbia and Legacy Records re-issued At Folsom Prison as a two CD, one DVD set with both concerts uncut and remastered, including the performances by Perkins, the Statler Brothers, and June Carter.  The DVD contained both original footage and interviews with Cash, Carter and others involved in the project.

Almost makes you wish that you were a California felon lucky enough to be in the original audience.