Too Mean to Die—Old Hickory’s Defiant Brush With Assassination 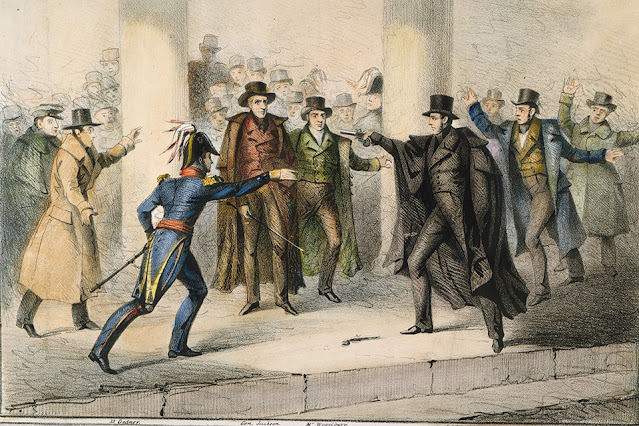 Mad Brit Richard Lawrence's pistol misfired when he took point blank aim at Andrew Jackson on the steps of the Capitol.

You have to feel a little sorry for Richard Lawrence.  He was in the right place at the right time, skulking around the steps of the U.S. Capitol Building on January 30, 1835.  A funeral service for a member of Congress was breaking up.  All the dignitaries of the government including the Chief Executive himself were in attendance and would have to pass within feet of him.  He carried in each side pocket of his coat one cocked and loaded single shot derringer flintlock pistol.  He had a plan.  What could possibly go wrong?

Lawrence was a 35 year old Englishman who had been hearing voices in his head for a very long time.  Some believe he may have been the victim of lead in the paint he used in his work. Back home those voices had told him that he was the son and the heir of Richard III and that somehow the American President had kept him from the Throne.  He believed what those voices told him with such certainty that he decided to cross the ocean and come to the United States to have his revenge.  Along the way he decided he was also King of the U.S. and that Andrew Jackson was a usurper.

Suddenly the doors of the Capitol flew open and the mourners, led by the President himself emerged.  Lawrence hid himself behind a pillar.  As Jackson neared, he drew his pistol and stepped in front of the President firing at his chest at point blank range. 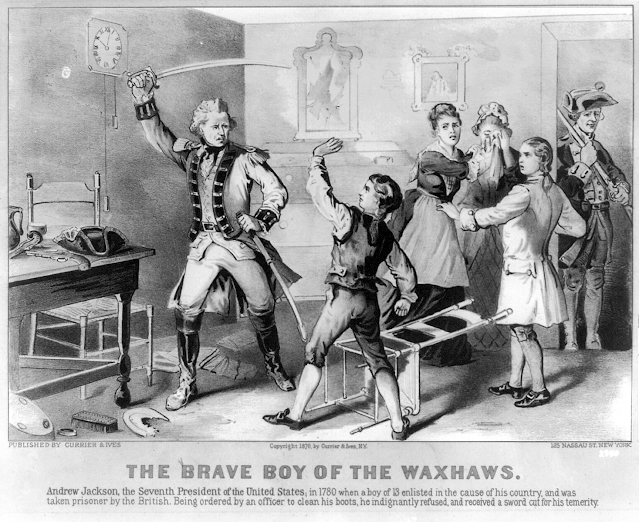 Jackson's larger than life image began with his Revolutionary War capture by the British as a boy and the saber slash across his cheek for defying an officer's demand that he clean his boots.


We interrupt the narrative at this point to review a little bit about the victim of the assault.  Andrew Jackson was no stranger to violence. During the American Revolution acting as a courier for irregular troops in North Carolina at the age of 13 or 14, Jackson was captured by the Red Coats.  When he defiantly refused the order of a British officer to shine his boots, his cheek was slashed open by a saber.

As a young man he took leave of his widowed mother keeping in mind a single piece of advice which he would follow to the letter the rest of his life, “Never sue for libel in a Court of Law.”  By that she meant that in affairs of honor the manly thing was confronting the offender personally and if possible, kill him.

In the raw new territory of Tennessee Jackson read and began practicing law.  He also developed a reputation of being quick to anger and as a common tavern brawler.  As he rose in the society of Nashville, he assumed the manners and character of a gentleman.  Which meant he abandoned wrestling in the mud, eye gouging, and trying to bite his enemy’s ear off.  Instead, he subscribed to the Code Duello.  Over the years he was in several affairs of honor and was both shot and did the shooting. 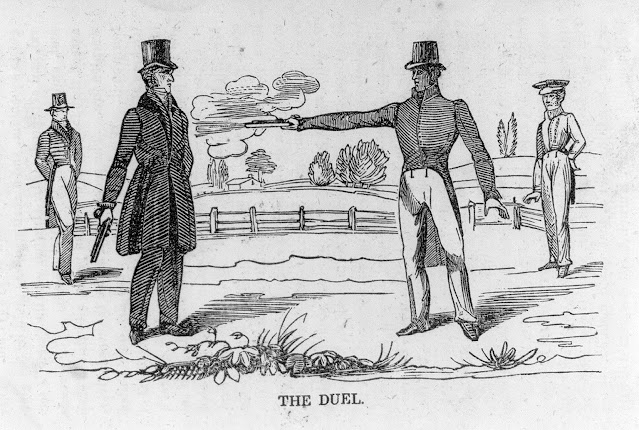 Jackson shot and killed Charles Dickenson in an 1806 duel after his opponent wasted his shot.  Dickenson had accused Jackson's wife Rachel of bigamy.


In one case he challenged a man who publicly asserted—truthfully—that his beloved wife Rachel was at least an inadvertent bigamist for marrying him before a divorce to her first husband was final.  On the field of honor his enemy purposefully wasted his shot.  In most cases the other party would do the same and both could leave the field with honor.  But Jackson took slow and steady aim at the defenseless man and shot him dead through the heart.

In 1813 a feud between Jackson, by then General of the Tennessee Militia and a former friend and subordinate officer Col. Thomas Hart Benton and his brother Jesse erupted into a wild street fight.  As Jackson closed to kill Thomas with a brace of pistols, Jesse snuck up behind him and shot him at point blank range in the side.  A ruckus between partisans of both sides ensued.  The Benton brothers fled town and Tennessee, although Thomas would later reconcile with the old General and become a political ally as a Senator from Missouri.  Jackson nearly bled to death and lost partial use of his left arm.  Jesse’s ball remained lodged in his body and caused him almost constant pain for the rest of his life. 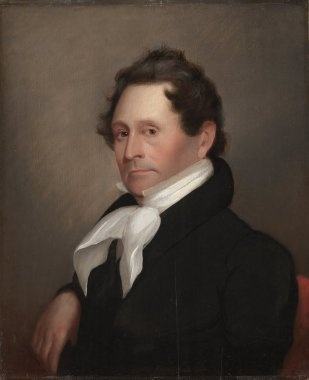 Jackson suffered a near fatal wound in a wild street brawl with Thomas Hart Benton and his brother Jesse.  Thomas latter reconciled with the General, became a staunch political supporter, and was a powerful Senator from Missouri.


Then, of course, there was Jackson’s well documented heroics and adventures as an officer against Native American tribes in the Red Stick War against the Creeks, at the legendary defense of New Orleans against the British, and finally marching through Florida in defiance of orders putting the nation at risk of a new war with Spain.

Back at the Capitol steps, when Lawrence fired a loud pop was heard and a cloud of black powder smoke briefly engulfed the two men.  But for some reason it was just a misfire, and the ball never left the barrel.

As the smoke cleared the enraged 67 year old President lurched for Lawrence and began beating him with his heavy gold-headed cane.  Lawrence stumbled.  He had trouble getting his second pistol out of his pocket while fending off blows.  When he did get it out, the second gun also misfired.  Jackson continued raining blows on the now prostrate man until witnesses physically dragged him away.

Jackson was unscathed, although he didn’t realize he had not actually been shot until he got back to the Executive Mansion and discovered nothing more than powder burns on his clothing.

Lawrence was taken to jail unconscious.  When he recovered he was examined by a doctor who declared that he was suffering from “morbid delusions.”

Later that spring Lawrence was put on trial.  The prosecutor was Francis Scott Key, better known as the writer of the Star Spangled Banner. Lawrence was found not guilty by reason of insanity, one of the first such verdicts in American history.  He lived his life out in various mental institutions until his death in 1861. 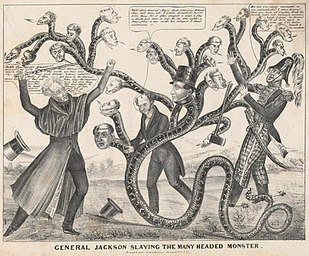 Jackson suspected that his bitter enemies over blocking the renewal of the Second Bank of the United States Charter were behind the assassination attempt.


Jackson didn’t believe it for a second.  He was sure that Lawrence was a hireling of his political enemies in the emerging Whig Party or perhaps of the bankers irate over his blocking the renewal of the Charter of the Second Bank of the United States.  Vice President Martin Van Buren agreed.  Ever after he carried a brace of pistols to the Capitol to fulfill his Constitutional duties of President of the Senate.

Many historians have examined the matter, and none have found any connection between Lawrence and Jackson’s many enemies.  That did not prevent the spread of the first of the conspiracy theories which seem to arise naturally from all assassinations and attempts. 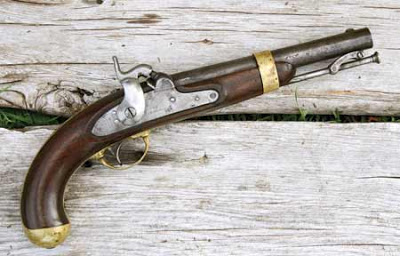 The Smithsonian Institution tested both of Lawrence's flintlock derringer pistols similar to this one, and both fired perfectly.


Lawrence’s pistols ended up in the Smithsonian Institution.  Around the centennial of the attack, researchers there tested both guns to try to find out why they had misfired.  Both fired perfectly on the first attempt to shoot them.  The scientists placed the odds of both functional pistols misfiring at 1 in 250,000.  Jackson was a lucky man.

Even luckier that he did not live in the 21st Century when his assailant might have a Glock with an extended clip.  No gold headed cane would protect him from that.