The Christmas season officially ends today as the Catholic Church and Western Christian denominations that borrow its liturgical calendar observe the Feast of the Epiphany. In the United States and some other countries, the feast is now celebrated on the First Sunday after New Year’s Day which would have been January 2 this year.  Theologically it is a celebration of the revelation to the world of Jesus as the fully human God the Son.  As such it celebrates a facet of the Trinity.  Little wonder that my Unitarian Universalists, who deny the whole Three-in-one God deal, don’t make much of the day.

There are several components of the revelation.  The first is the visit by the Magi to the Child in Bethlehem—the announcement of the Holy presence to the Gentile world.  Second is the baptism of Jesus in the River Jordan by his cousin John, the half-mad preacher.  Third is the marriage party in Cana where Jesus was said to have performed his first miracles—proof of his divine power. 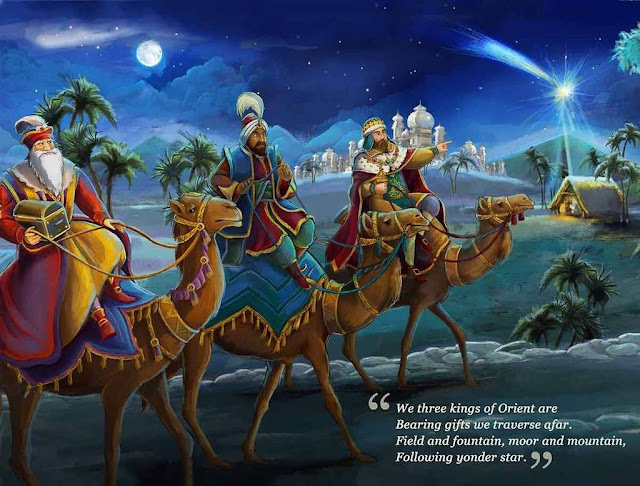 The story of the Magi from the Bible morphed into three specific Eastern rulers in Western tradition.


Despite the complexity of the multiple stories, in the West the Feast of the Epiphany is largely all about those Magi.  In fact, in most Latin American countries it is most commonly known as the Feast of the Three Kings, which sort of diverts attention from the alleged star.  On the Eve the Magi are finally added to Nativity scenes and on January 6, children wake up to gifts from the Kings.  It was the main gift giving occasion of the Christmas season, or at least was until ubiquitous Santa Claus began invading traditional cultures. 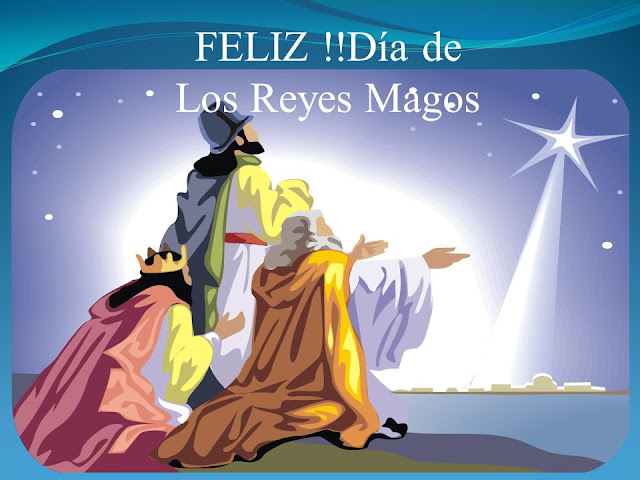 El Día de Los Reyes Magos—the Day of the Three Wise Kings is celebrated across Latin America with unique customs including a feast featuring a cake with a hidden king or baby Jesus and the person who finds the object hosts the feast the next year.  It is also the primary gift event of the season for children.


In Jolly Olde England the 5th was Twelfth Night of Shakespearean fame. It was a traditional time for mumming and the wassail. The Yule Log was left burning until the 6th.   It was also a day for playing practical jokes, similar to April Fool’s Day.   Thus, all of the foolery in the Bard’s play which was written to be performed on its namesake.  All of this gayety and mirth, was, of course, squelched by those pesky Puritans and few vestiges of these traditions are still celebrated.

Now about those alleged Kings…First, it they existed at all they were surely not rulers of any sort.  What we know of them comes from the Gospel of Mathew as described in the King James Version:

2 Now when Jesus was born in Bethlehem of Judaea in the days of Herod the king, behold, there came wise men from the east to Jerusalem,

2 Saying, Where is he that is born King of the Jews? for we have seen his star in the east, and are come to worship him.

3 When Herod the king had heard these things, he was troubled, and all Jerusalem with him.

4 And when he had gathered all the chief priests and scribes of the people together, he demanded of them where Christ should be born.

5 And they said unto him, In Bethlehem of Judaea: for thus it is written by the prophet,

6 And thou Bethlehem, in the land of Juda, art not the least among the princes of Juda: for out of thee shall come a Governor, that shall rule my people Israel.

7 Then Herod, when he had privily called the wise men, enquired of them diligently what time the star appeared.

8 And he sent them to Bethlehem, and said, Go and search diligently for the young child; and when ye have found him, bring me word again, that I may come and worship him also.

9 When they had heard the king, they departed; and, lo, the star, which they saw in the east, went before them, till it came and stood over where the young child was.

10 When they saw the star, they rejoiced with exceeding great joy.

11 And when they were come into the house, they saw the young child with Mary his mother, and fell down, and worshipped him: and when they had opened their treasures, they presented unto him gifts; gold, and frankincense and myrrh.

12 And being warned of God in a dream that they should not return to Herod, they departed into their own country another way.

Note that they are not identified in any way as kings.  They are said to be from the East, so it is likely that they were meant to represent Persian priests or Asian astrologers.  Nor is any number set.  The early church sometimes used figures up to twelve.  Eventually the number was settled at three and totally un-Biblical tales sprang up around them.  They even grew names and origin stories—Melchior, a Persian; Caspar, an Indian; and Balthazar from Arabia—perhaps from Yemen which then had Jewish kings. 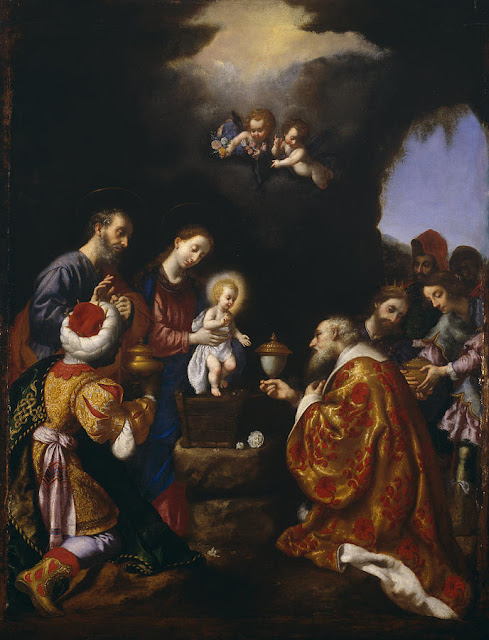 The Adoration of the Magi by Carlo Dolci.


There is no reason to believe that their visit fit neatly into the later liturgical calendar twelve days after a mid-winter birth.  In fact, the kind of Biblical scholars who try to find historical accuracy in the Bible think that the visit may have been up to two years after the birth and that the Holy family may have been in residence in Bethlehem for that long.  They infer this from the fact that Herod ordered the massacre of all male children under two years of age, not just infants.

Then there is the issue of the Star.  Of course, if you are a literalist, you believe that an actual star either hovered over the City of David, or actually moved, leading the Magi on their journey.  But those seeking natural explanations for the phenomena have proposed various possibilities, most commonly a comet or the appearance of a near-solar system super nova.  The problem with either of these suggestions is that the very careful records kept by Chinese astrologers make no note of either phenomenon in a five year window around the time of Jesus’s presumed birth.  And they surely would have noted it.

One explanation that has gained some traction is that the Star was actually a triple conjunction of Jupiter and Saturn in the constellation Pisces, which is known to have occurred in 7 BCE, a little late for the story but close enough for some.  But contemporary Babylonian records show little interest in the event and does not suggest that the planets converged closely enough in the sky to create a super bright object.

Then perhaps it was a UFO.  That will probably be a History Channel two hour special next year.

Or the Star and the Magi are all pious fiction and poetry meant to inform the understanding of the birth of the Messiah to the Gentile world.  No mention of the Magi can be found in the simple nativity story found in Luke.  Presumably the sudden presence of well-dressed strangers in the stable would have been noted by those shepherds.  And why did they have to follow a Star when God apparently had no shortage of herald angels to tell the travelers just where to go.

But I don’t want to nit-pick a treasured story.  After all, much fiction can be truth in a broader sense, or at least symbolic of a truth.

Back to the Feast of the Epiphany.  The Copts and Eastern Orthodox also celebrate the feast but on different dates dependent on their calendars.  They also celebrate the incarnation of God in Man but build their observances not so much on the Kings.  They concentrate on the Baptism as the great announcement. An icon of the Baptism of Jesus by his cousin John shows the focus of the Orthodox Feast of the Epiphany.


It was also much more celebrated in the Medieval Western church as evidenced by many pre-Renaissance paintings of the Baptism and concerning Jesus’s relations with his cousin John.

But those virtually disappeared signaling a change of Christology in the Catholic Church.  Emphasis on John and other earthy relatives of Jesus such as his siblings like James of Jerusalem seemed uncomfortably close to viewing Jesus as a wholly mortal man, not a partner in a godhead.

Anyway, there you have it—The Feast of the Epiphany.  Celebrate or not as you choose.  But tomorrow it won’t be Christmas anymore. 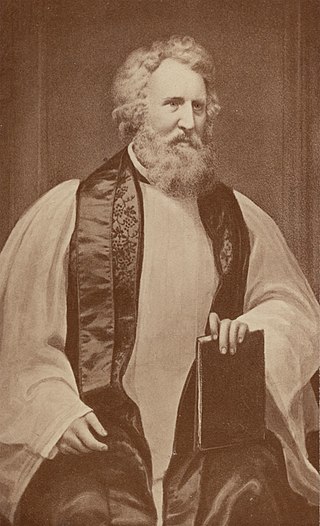 
The song most associated with the Epiphany is, of Course, We Three Kings of Orient Are.  It   was written in 1857 by John Henry Hopkins Jr., Rector of Christ Episcopal Church in Williamsport, Pennsylvania. He wrote the carol for a Christmas pageant in New York City at his alma mater, the General Theological Seminary.  He published the carol in 1863 in his book Carols, Hymns, and Songs. It was the first American Christmas carol to achieve international popularity, as well as the first to be featured in Christmas Carols Old and New, the prestigious and influential collection published in Britain in 1916 and was printed in the hymnal of the Episcopal Church. 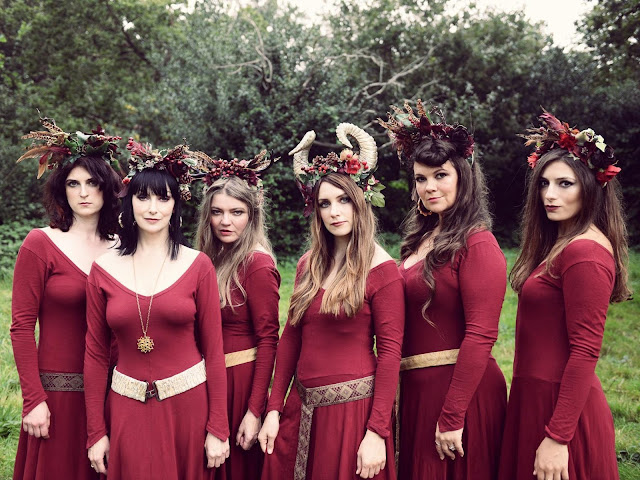 
It has been recorded countless times.  Among the loveliest of versions is this by Mediaeval Baebes from their 2013 album Of Kings and Angels on Queen of Sheba Records.  The Mediaeval Baebes are a British musical ensemble founded in 1996 by Dorothy Carter and Katharine Blake and included some of Blake’s colleagues from the band Miranda Sex Garden, as well as other friends who shared her love of medieval music. The lineup often rotates from album to album, and ranges from six to twelve members.