Note—As we close in on the end of our Winter Holidays Music Festival we will spend two days on the close of the Twelve Days of Christmas as observed in British tradition and the Anglican liturgic calendar on January 5.  The next day, the Feast of the Epiphany or Day of the Three Kings will wrap things up.

Twelfth Night is the eve of the Feast of the Epiphany (and the end of the Christmas Season.  In England especially it was one last eruption of gaiety and mirth before the more somber and sacred reflection of the Epiphany—somewhat analogous to Mardis Gras or Carnival before Lent. 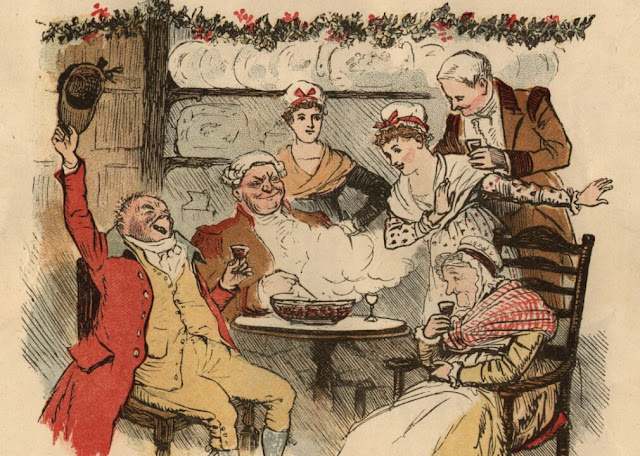 A ragged caroler offers a steaming wassail bowl at a gentleman's table and is rewarded with fine libations.


In the Middle Ages and Renaissance, it was the climax of the caroling and street revelry that followed Christmas Day and was marked with dancing, a sexual cavorting—the subject of William Shakespeare’s comedy Twelfth Night— and costumed revelry often evoking the Holy King and semi-pagan masquerades. Mostly it was celebrated by caroling with wassail, a hot mulled wine or cider prepared and served in bowls.  Often a landlord’s peasants and tenants came bearing large wassail bowls for the lord of the manor in exchange for lavish gifts of food and other beverages.  So popular was the beverage and custom that there were a number of songs about it that asked—or demanded—the hospitality of the landlord at whose door the carolers appeared.  The most familiar is the gay Here We Come A-Wassailing, But there were several others from different regions of the Realm, each of which might variant local lyrics set to any number of folk tunes.

Here We Come A-Wassailing is a traditional English Christmas carol and New Year song, sung while wassailing—singing carols, wishes of good health and offering homemade bowls of wassail exchange for an invitation to share drinks and food with the master of the house.  It is listed in the Roud Folk Song Index. Gower Wassail and Gloucestershire Wassail are similar carols. 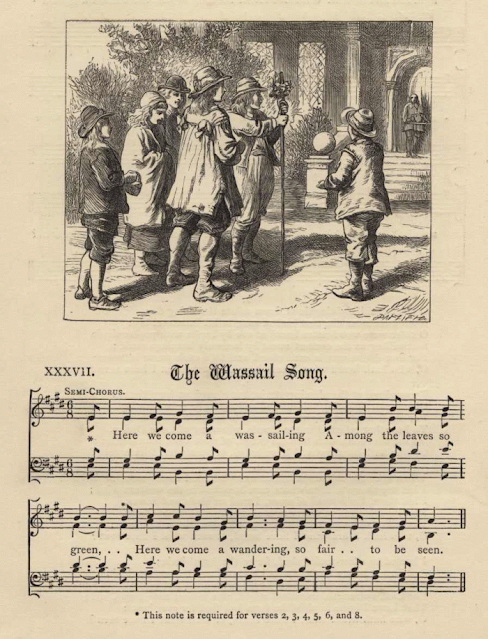 A late 19th Century carol collection included it under the alternative title The Wassail Song.


The song was collected and printed in the mid-19th Century but is much older.  The a in “a-wassailing” is an archaic intensifying prefix found in A-Hunting We Will Go and lyrics to The Twelve Days of Christmas—“Six geese a-laying.”

Hundreds of versions of wassailing songs have been collected, including dozens of variants collected by Cecil Sharp from the 1900s to the 1920s, mostly in the south of England.  It appears to have travelled to the United States with English settlers, where it was found several times in the Appalachian region.  Early American recordings included Edith Fitzpatrick James of Ashland, Kentucky in 1934 folk legend Jean Ritchie in 1949.  Americans often sing a variant, Here We Come A-Caroling probably because publishers and record producers didn’t thank the Yanks would know what the hell wassailing was. 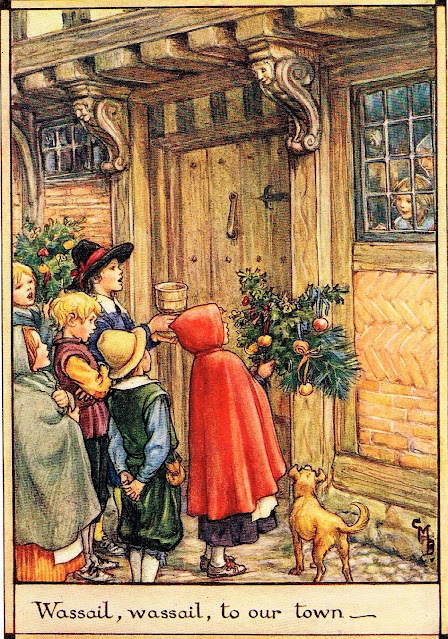 As reflected in the lyrics, a more gentle form a wassailing was the visit of neighborhood children who got treats much like trick-or-treaters.


Representative verses of the most commonly sung versions include:

Among the leaves so green;

So fair to be seen.

Love and joy come to you,

And to you your wassail too;

And God bless you and send you a Happy New Year

And God send you a Happy New Year.

Our wassail cup is made

Of the rosemary tree,

And so is your beer

Of the best barley.

We are not daily beggars

That beg from door to door;

But we are neighbors’ children,

Whom you have seen before.

Call up the butler of this house,

Put on his golden ring.

Let him bring us up a glass of beer,

And better we shall sing.

We have got a little purse

We want a little of your money

To line it well within.

Bring us out a table

And spread it with a cloth;

Bring us out a mouldy cheese,

And some of your Christmas loaf.

God bless the master of this house

Likewise the mistress too,

And all the little children

That round the table go.

While you’re sitting by the fire,

Pray think of us poor children

Who are wandering in the mire.

Jean Ritchie came from an old family of Scottish and English settlers in Virginia and Kentucky stretching back to pre-Revolutionary times.  The extended family brought many traditional songs including those that would be identified as Childe Ballads and passed them on from generation to generation and collected many more over time from neighbors and relatives.  They played instruments and became well known as local singers in Kentucky.  She was born the youngest of 14 children in Viper in 1922.  Her family encouraged the children to get educations and 11 of them graduated from college.

Jean enrolled in Cumberland Junior College—now the four-year University of the Cumberlands—in Williamsburg and from there graduated Phi Beta Kappa with a B.A. in social work from the University of Kentucky in Lexington in 1946.  She moved to New York City as a social worker at a settlement house where she taught her traditional ballads.  She fell in with the post-World War II folk music scene and befriended Woody Guthrie, Oscar Brand, Pete Seeger, and Alan Lomax.  She appeared with The Weavers, Guthrie and Betty Sanders at the annual Spring Fever Hootenanny in 1947 and soon became a regular on Brand’s pioneering folk music radio program. 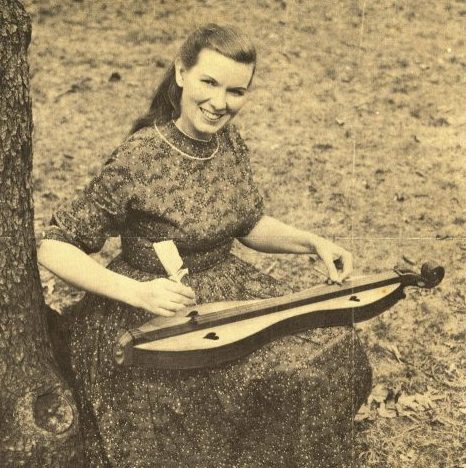 Kentucky bread traditional singer Jean Ritchie with her mountain dulcimer about the time of her 1949 sessions with Alan Lomax for the Library of Congress.


In 1949 Alan Lomax recorded hours of her songs, storytelling, and family recollections in 1949 which ended up in the Library of Congress collection.  The red-haired singer played primarily a simple mountain dulcimer but could also play banjo, guitar, and autoharp.  In 1953 she became a full-time musician and signed a contract with Electra Records.  She has subsequently recorded dozens of albums, written and published family memoirs and song collections, helped found the Newport Folk Festival, and mentored generations of singers.  A much beloved mother of American folk music she continued to sing and perform almost up to her death in 2015 at age 92.

Her version of Here We Come A-Wassailing was recorded by Lomax in the 1949 New York sessions.