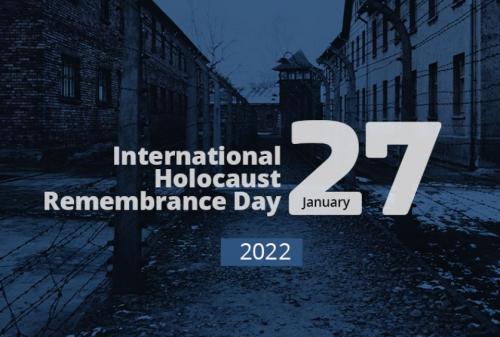 The grim reality is that 77 years after the world got confirmation of the breadth of the Holocaust anti-Semitism is on the rise in the United States and in Europe.  As the last survivors of the death camps and the Allied soldiers who liberated them dwindle the collective memory has dimmed.  Polls constantly show that younger people are at best foggy on the reality—many can’t place World War II within 50 years on a timeline, are unsure who the combatants were and on who was responsible for barely understood atrocities.  Holocaust denial is on the rise spread mainly by those who try to mask their own intentions to “complete the job.”  Right wing nationalism is making a comeback in Europe making substantial gains in several national parliaments and coming to power in Poland and other Eastern European Countries. 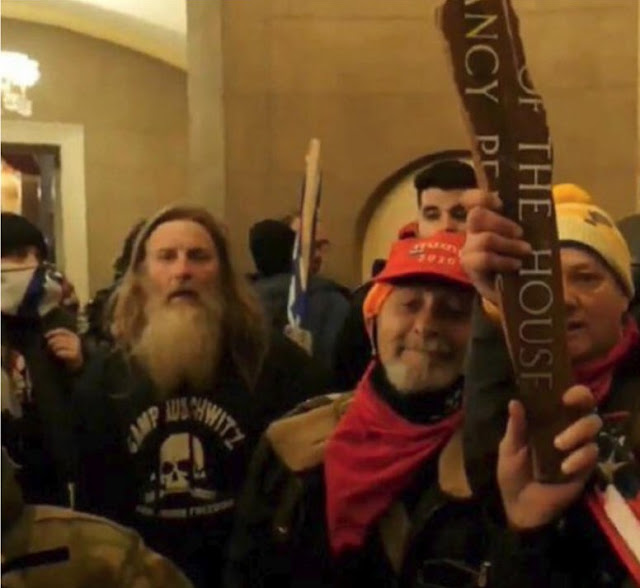 Nazi paraphernalia and symbols were on display during the violent occupation of the U.S. Capitol last year by organized insurrectionists.  No one in the mob seemed a bit perturbed by this guy and his sweatshirt.


In the U.S. White nationalism has broken out of the pariah fringe of society and is making a bid for respectability as it was given barely concealed wink and nod support from the former Resident himself.  Deadly mass shootings at the Tree of Life Synagogue in Pittsburgh and at a kosher grocery in New Jersey as well as a mass stabbing attack on a suburban New York home Hanukkah celebration were only some the most widely noted events.  Vandalism and attacks on synagogues, cemeteries, schools, and other Jewish institutions are on a sharp rise.  Anti-Semitic flyers and propaganda are being posted at colleges, universities, and high schools as well as in suburban communities.  The insurrectionist attack on the Capitol included individuals with swastika tattoos, a Camp Auschwitz sweatshirt in addition to members of anti-Semitic neo-fascist groups like the Oath Keepers and Proud Boys.  Even as White nationalist, racist, and anti-Semitic groups have lately been purged by Facebook, Twitter, and other platforms they find homes elsewhere and on the so-called Dark Web

Confounding attempts to counter these dangerous trends is the Israeli government’s campaign to tar every critic of its brutal and unrelenting attacks on Palestinians in Gaza, the occupied West Bank, and now in Jerusalem, Bethlehem, and other cities as anti-Semites.  The former Cheeto-in-Charge was happy to echo those charges and to support efforts to virtually outlaw calls for economic and cultural boycotts of the Jewish state.  Former Harry Potter actress Emma Watson recently became the latest victim smeared as anti-Sematic for daring to criticize Israeli oppression of Palestinians. She will not be the last. 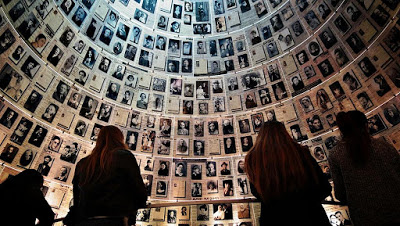 The Hall of Names keeps the memories of individual Holocaust victims alive at Yad Vashem in Jerusalem.


Today is International Holocaust Remembrance Day.  It will be observed—celebrated is certainly the wrong word here—in ways big and small, significant and trivial in many places across the world.  The commemoration comes on the anniversary of the liberation of Auschwitz-Birkenau death camps in Poland by the advancing Red Army on January 27, 1945.  American, British, Canadian, and other Allied Forces liberated other camps, but Auschwitz was the pinnacle of efficiency for the Nazi industrialization of mass murder.

On the sixtieth anniversary of the liberation the United Nations General Assembly held a special commemorative session.  The following November the General Assembly created the memorial day, which was first observed in 2006.

In November of 1944 as the Red Army advanced from the East and the Allies pressed on the Western Front, SS Chief Heinrich Himmler ordered the beginning to the eradication of evidence of the death camps in Poland.   Gassing operations were suspended and crematoria at Auschwitz were ordered destroyed or, in one case, converted into a bomb shelter.  As things got worse, Himmler ordered the evacuation of the camps in early January directing that “not a single prisoner from the concentration camps falls alive into the hands of the enemy.”

On January 17, 58,000 Auschwitz detainees were set on a death march west towards Wodzisław Śląski. Approximately 20,000 Auschwitz prisoners made it to Bergen-Belsen concentration camp in Germany, where they were liberated by the British in April 1945. 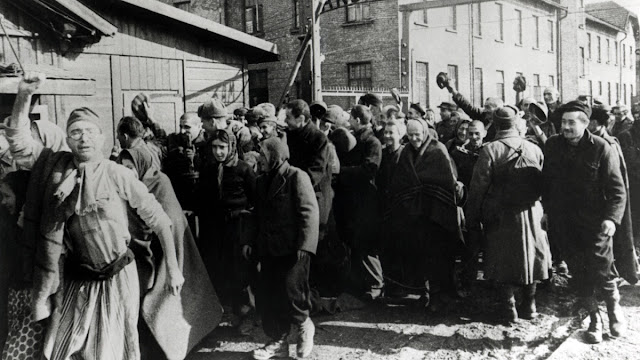 Some of the healthier inmates of Auschwitz after liberation by the Red Army.


But that left over 8,000 of the weakest and sickest abandoned with scant supplies.  The Red Army 322nd Rifle Division arrived 10 days later to find 7,500 barely alive and 600 corpses lying wherever they finally collapsed.  They also found much evidence of the greater crimes Himmler had hoped to hide—370,000 men’s suits, 837,000 women’s garments, and 7.7 tons of human hair. Coming in the midst of the Yalta Conference and other war news, the liberation received scant media attention at the time.  And the Soviets, who were at best ambivalent at the highest levels about what to do with the liberated Jews, did little to publicly celebrate their role in the liberation, at least at first.

It was only after survivors reached the West and eventually Israel as refugees, that Auschwitz emerged as a special, horrific symbol of the whole Holocaust. 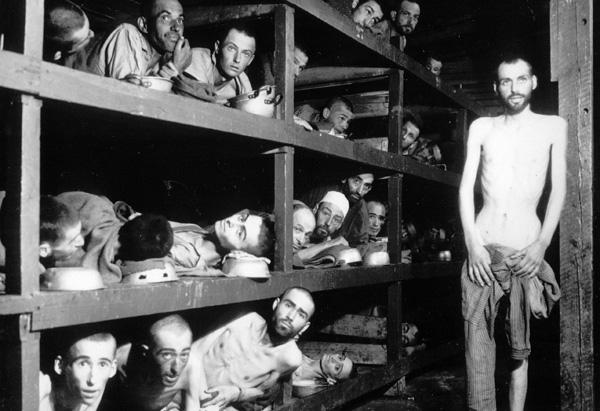 The publication of the Diary of Ann Frank, Ellie Wiesel’s Night, and other memoirs by survivors, camp liberators, and on-the-scene journalists made deep public impressions in the West as did films like Stephen Spielberg’s Shindler’s List.  Evidence of the Holocaust has been carefully preserved at Israel’s Yad Vashem, the world central archive of Holocaust-related information and at Holocaust museums in many major cities.  Public acknowledgement of the Holocaust probably peaked internationally around the turn of the 21st Century and has been eroding since then.

The 75th anniversary was marked by a special meeting at the Fifth World Holocaust Forum at Yad Vashem in Jerusalem.  Over 50 international leaders including French President Emmanuel Macron, Russian President Vladimir Putin, Britain’s Prince Charles, and American Vice-President Mike Pence were on hand for the event.  They heard Netanyahu denounce critics of Israel as Anti-Semites and to beat the band for an international attack against Iran.   Other leaders, except Pence, generally distanced themselves from Netanyahu’s remarks and spoke in platitudes of varying degrees of sincerity about preventing any future genocide. 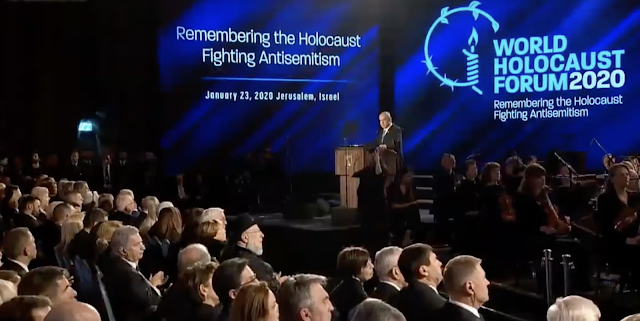 Holocaust Remembrance was muddied in 2020 year at the World Holocaust Forum when Israeli Prime Minister Benjamin Netanyahu used the occasion to justify violent oppression of Palestinians and his apartheid regime, to attack all critics of his policy as anti-Semites, and to rouse support for an attack on Iran.

Together we can truly pledge “Never Again!”  and mean it for Jews and for the modern targets of repression, oppression, apartheid like ghettoization, and even actual genocidal attacks including the Palestinians.