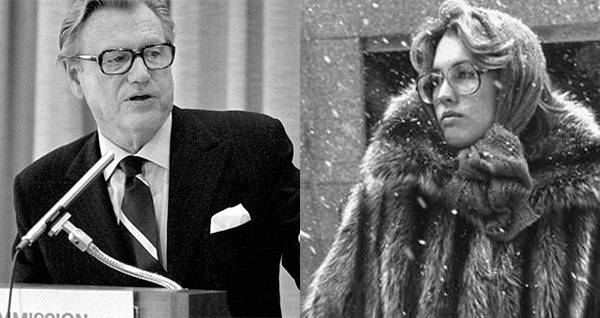 I can’t help myself.  In retrospect it seems like such a quaint little scandal.  Charming really—the short naked final tumble of the recent Vice President of the United States and one of the wealthiest men in the country.  It seems almost like a May-December romcom with a dark twist ending.   Compare that with the multiple scandals and affairs of the last Resident of the United States—think Stormy Danniels, teen age beauty queens, and boastful pussy grabbing. 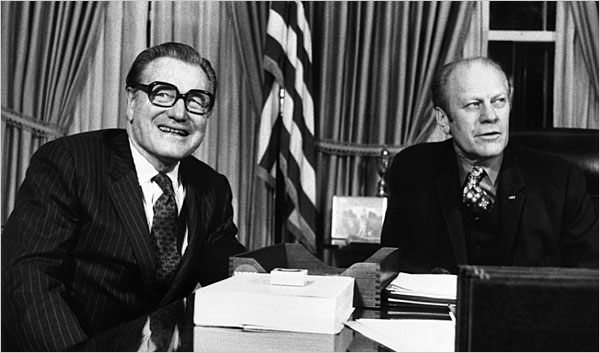 When Gerald Ford became President after Richard Nixon's resignation, Nelson Rockefeller was appointed as Vice President to fill out the vacancy in the office.  It was the crown of a long political career.

Unfortunately for him, he collapsed on 27-year-old Megan Marshak, an aide to the political powerhouse.  He was naked.  So was she.  She struggled to get the large, heavy man off her.  In doing so she may have pushed him off her bed and onto the floor.  Anyway, that’s where he was found by a responding ambulance crew.

In the town house at 13 West 54th Street in New York City where Rockefeller theoretically kept a secondary office, but was really Marshak’s residence, the young woman went into a panic.  The affair between the two had been a very well-kept secret.  Rockefeller was very publicly married to his second wife, the former Margaretta “Happy” Murphy, herself a one-time aide when Rockefeller was governor of the Empire State.  Not knowing what else to do, Marshak phoned her close friend news reporter Ponchitta Pierce. 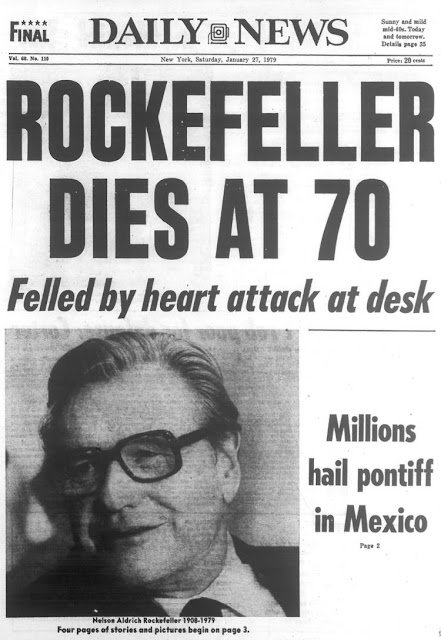 The press initially ran the cover-up story, but it quickly unraveled.

Meanwhile the family scrambled into a protective mode.  The first press announcements said that Rockefeller was found collapsed at his desk at his main office in Rockefeller Center by a security guard.  That tale unraveled quickly.  The family acknowledged that he was with Marshak, but claimed they were working together in the second office.  The press quickly surmised that this was a ruse and began hinting, as broadly as possible in those more discrete days, that there might have been hanky-panky going on. 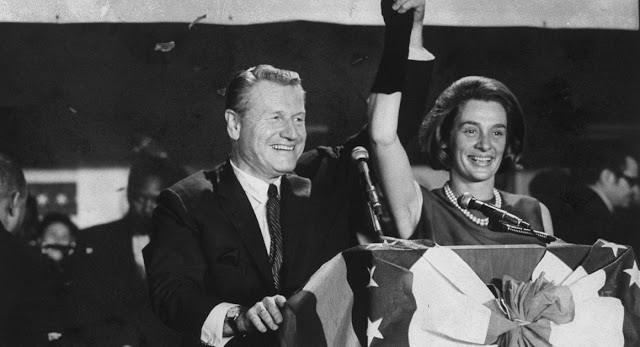 Rockefeller and his second wife Happy, another former aide.

The family and close friends gathered for a funeral on January 29 and the ashes were interred at the private Rockefeller family cemetery in Sleepy Hollow, New York.  On February 2 a public memorial was held at the famous Riverside Church attended by more than 2,200 people including President Jimmy Carter, former President Gerald R. Ford, more than 100 current or former members of Congress, as well as official representatives from more than 70 nations.

Among those in attendance was Senator Barry Goldwater, whose insurgent campaign against Rockefeller and the hated Eastern Liberal Republican Establishment in 1964 denied Rocky his second shot at the Republican Party nomination for President—the one that was probably doomed by his hasty divorce from his first wife and equally hasty marriage to Happy, who had just dumped her own long-time spouse.

Conservatives could hardly contain their glee at Rockefeller’s demise and the embarrassing circumstances.  They considered it the death knell of liberal Republicanism.  And it pretty much was.  It took a while, but the species Rockefeller represented is now as extinct as the dodo.  Even today a Google search of Rockefeller’s death will turn up dozens of right wing web sites still gloating and many consigning their old foe to eternal damnation.  These folks never give up a grudge. 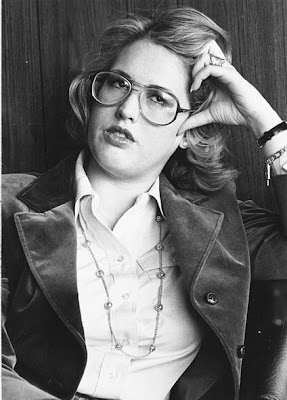 Megan Marshack looked very businesslike and professional in one of the few photos of her ever published.

As for the hapless young Megan Marshak, she holed up for weeks in the town house, never leaving, answering the phone, or granting any interviews.  When Rockefeller’s will was read, Marshak was left the deed to the now infamous townhouse.  She briefly dated macabre cartoonist Chas Addams who lived in the same building about a year after Rocky’s death.

Then she essentially vanished.  Only four published photographs, all taken before the death, are known to exist and that includes one of her at about age 12 and another that was high school mug shot.  Despite enormous press interest she was able to disappear.  In 1992 it was reported that she was living in New York and working quietly as a news writer and producer at WCBS-TV. In 2008 that pillar of journalism Parade Magazine reported that she had married and was living quietly in Southern California.
Posted by Patrick Murfin at 6:16 AM