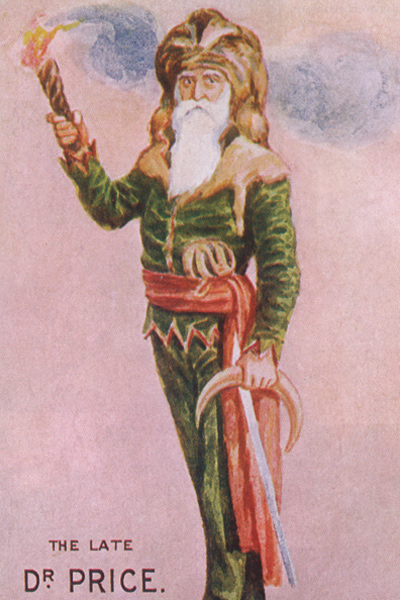 On January 18, 1884 an old man with white beard nearly to his knees and dressed in green clothing, a red sash, and a fox fur draped across his head, ascended a mountain overlooking the Welsh town of Llantrisant.  Muttering invocations in a form of “ancient Welsh” of his own invention, he lit a pyre and laid the body of his five-month-old son, Iesu Grist, Welsh for Jesus Christ, on it.  Townspeople investigating the fire fell upon the old man in a rage and pulled the unconsumed body of the infant from the flames.

Dr. William Price had to be rescued from the mob by the local constabulary who promptly charged him with the illegal disposal of a corpse under the assumption that cremation, long banned by Church tradition which held a belief in bodily resurrection on Judgment Day, was illegal.  He escaped a charge of infanticide when an autopsy showed that the boy died of natural causes. 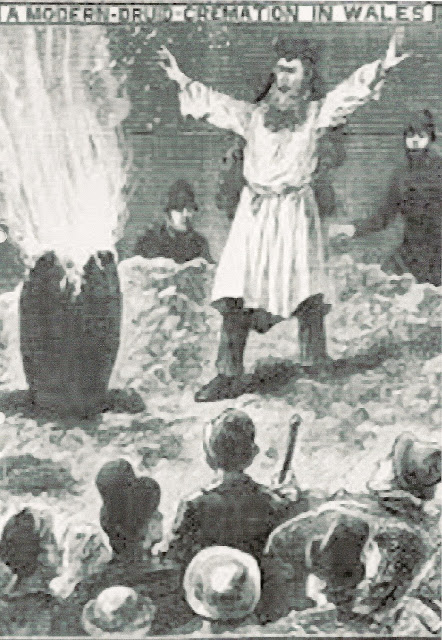 Dr. Price attempting to cremate his son Iesu Grist.  His arrest and highly publicized court case would pave the way for full recognition, legalization, and regulation of cremation in Great Britain.


Price was brought to trial at Cardiff before the riveted attention of the British press.  He argued that there were no statutes that either sanctioned or forbad cremation.  It turned out he was right.  The judge was forced to free him.  Price returned to Llantrisant and before a crowd of hundreds of supporters, completed the cremation.  He erected a 60 foot high pole surmounted by a crescent moon on the site and declared his intention to be burned there in his own time.

There was already a small movement to permit cremation in Britain based on various religious beliefs and for reasons of sanitation.  The new Cremation Society of Great Britain saw the ruling as precedent.  They promoted cremations at Working in 1885 and encouraged the founding of the first British crematorium at Manchester in 1892.  But it was not until the Parliamentary Cremation Act of 1902 that the practice gained the full sanction and regulation of law.

For his part, Dr. Price enjoyed the national celebrity the case bestowed upon him and took advantage of it by selling medallions and religious tracts promoting his Neo-Druid sect and the Welsh nationalism he had long embraced.

But the case was just one episode in the long life of a man described as “both one of the most colourful characters in Welsh history, and one of the most remarkable in Victorian Britain.”

Price was born in a cottage at Tyn-y-coedcae Farm (The House in the Wooded Field) in Risca, Monmouthshire, Wales on March 4, 1800.  His father was an Anglican priest and his mother had been an illiterate servant girl—a scandalous marriage across class lines.  The first surviving son and fourth child, he was raised in a Welch speaking home and knew no English until he began his formal schooling.  His father was a Welch nationalist and by local accounts quite mad, often speaking to trees, spitting on stones, and apt to fits of violence.

Young William attended school in nearby Machen from the ages of 10 in 13.  He proved to be a brilliant student and not only mastered English but completed his course work in only three years and successfully passed his examinations.  In defiance of his father, who wanted his son to be a solicitor, the boy apprenticed himself to successful surgeon, Evan Edwards, at Caerphilly in south Wales. 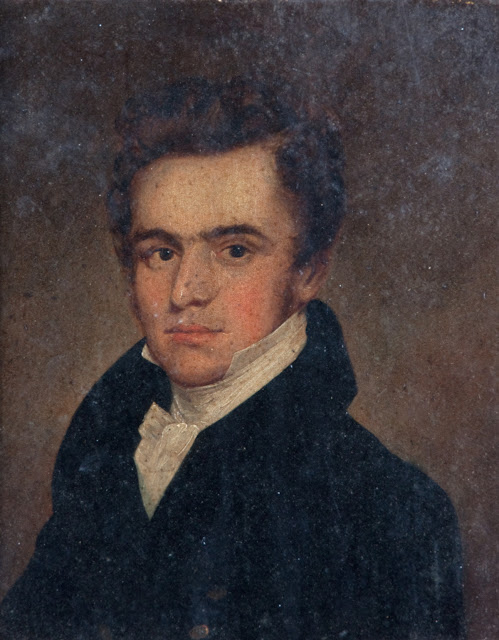 William Price in 1822 as a medical student.


Completing his apprenticeship in 1820, Price entered the London Hospital in Whitechapel for a year of instruction under Sir William Blizard and then at St. Bartholomew’s Hospital studying with surgeon John Abernethy.  He found private employment caring for wealthy patients to finance his studies.  By 1823 he had earned his place in the Royal College of Surgeons.

Despite being tempted to go to India, Price decided to return to Wales and set himself up as a general practitioner.  For seven years he practiced at Craig yr Helfa in Glyntaff and rented a nearby farm on which he raised goats.  But some sort of trouble arose, and he was evicted from the farm.

While maintaining his Glyntaff practice, Price moved to the industrialized Taff Valley near to Pontypridd.  Serving the working people there, he was elected in 1823 as chief surgeon at the Brown Lenox Chainworks, a job he kept—with as we will see some interruptions—until 1871.  He also became a private physician to the wealthy Crawshaw family who owned the ironworks at Merthyr and Treforest.

The Crawshaws were ardent Welsh nationalists and helped Price renew his interest in Welsh culture and identity.  He began to be noticed in nationalist circles when he delivered an impassioned address at the Royal Eisteddfod, a Welsh festival of literature, music, and performance, in 1834 and became judge of the annual bardic competition at the Eisteddfod.  He awarded a prize to Taliesin, the son of the famous Welsh nationalist and Druid, Iolo Morganwg, perhaps sparking his interest in the religion of the ancient Celts.

He joined the Society of the Rocking Stone, a Neo-Druidic group that met at the Y Maen Chwyf stone circle in Pontypridd, and by 1837 had become one of its leading members.  He also began the first of repeated efforts to establish a Druidic museum of in the town.

At the same time his close association with the workers and the time he spent in Treforest, a hot bed of working class radicalism, drew him into the Chartist Movement.  Although the movement’s goals of electoral reform and one man, one vote seem mild in retrospect, to the national Tory establishment it was considered revolutionary and anarchical.  Welsh workers were among the most militant in the nationwide movement and many were convinced that it would take armed revolution to achieve their ends.

Price joined the movement and rapidly rose in local leadership.  Price sided with the revolutionaries and began helping them amass arms for the day of insurrection.  By 1839 he had secured seven pieces of field artillery and assorted small arms.  Despite his militancy, Price feared that a planned march on Newport was premature and sure to be crushed by the Army.  He and his followers stayed away from what became known as the Newport Rising and the bloody battle with the Army that left more than 20 workers dead and 50 wounded.  In the aftermath scores of Chartist leaders were arrested and 24 were put on trial for their lives. 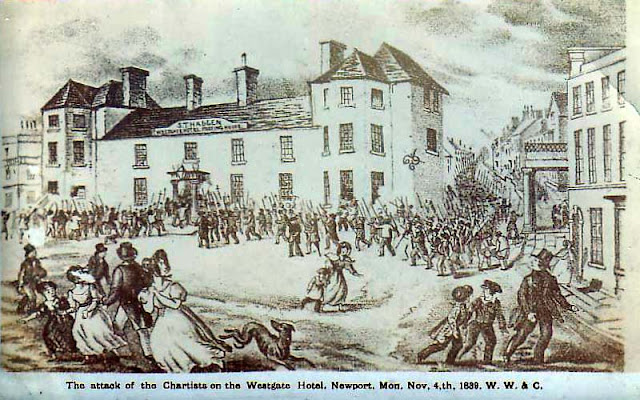 Although an active Welsh Chartist leader, Dr. Price feared the march on Newport was premature and doomed.  He and his group sat out the attack but in its wake he still had to flee the country.


Rightly figuring that he was in danger, Price fled the country disguised in women’s clothing.  He wound up in the traditional European home of political exiles, Paris.   It was there while visiting the Louvre that he had a religious epiphany and a vision which has been compared to that of Joseph Smith and the Gold Tablets of Mormonism.  He became fixated with an ancient Greek stone with an inscription which he believed depicted an ancient Celtic bard addressing the Moon.  That no one else shared this insight did not bother him in the least.  In fact, he intuited a whole story from the stone that it represented prophecy given by an ancient Welsh prince named Alun, that a man would come in the future to reveal the true secrets of the Welsh language and to liberate the Welsh people.  Price was sure that he was that liberator.

When it was safe, Price returned to Pontypridd and set himself up as a chief Druid.  Charismatic, he drew a following.  He began to grow his hair and beard and took to wearing special costumes both in daily life and at the rituals he led at Rocking Stone.  He carried a long staff surmounted by a crescent moon.  Many of his followers carried elaborately carved sticks and staffs as well.

After declaring that marriage was an illegitimate exploitation of women that reduced them to chattel, Price took as a partner Ann Morgan who presented him with a daughter in 1842.  At a Rocking Stone ritual, he named the girl Gwenhiolan Iarlles Morganwg (Gwenhiolan, Countess of Glamorgan).

As time went by his vision became more grandiose.  He allied himself with the Order of True Ivorites, a so-called Friendly Society, which conducted all of its business in Welsh, and which fostered working class solidarity and mutual aid.  In place where trade unions were suppressed the secret society gave them cover under which to operate.  In 1855 Price then led a parade of the Ivorites, through the streets of Merthyr Tydfil, accompanied by a half-naked man calling himself Myrddin (Merlin) and a goat.

Price resurrected his dream of a Druid museum and school and secured the patronage of a local landowner.  But he had a falling out with the patron and the scheme once again fell through, this time leaving Price heavily in debt.  Once again he fled to Paris in 1861.

While in the City of Life, he began to send letters to the Welsh and English press with new claims.  He proclaimed himself Lord of the Southern Welsh.  He also made claims that “All the Greek Books are the Works of the Primitive Bards, in our own Language!!!!!!!… Homer was born in the hamlet of Y Van near Caerphili. He built Caerphili Castle… the oldest Books of the Chinese confess the fact!!”  Then, as now, writing with extraneous exclamation marks was considered a sign of mental instability.

Yet Price pressed on.  Upon returning to Wales in 1866 he settled in Llantrisan opening a new medical practice which thrived despite his eccentricities. By this time Ann Morgan had died and his daughter Gwenhiolan had grown up and was living an independent life.

He began work on a master opus, in what he claimed was the pure and original form of Welch, from which the Greeks learned.  It was an invented dialect that no one but he and his most devoted followers could read.  In The Will of My Father, Price described the universe being created out of a snake’s egg by a supreme Father God.  Perhaps this recalled one of his own father’s many eccentricities—collecting and carrying small snakes by the pocketful on his wild roaming.

The book, which no one could read, was published in 1871 and sank into almost immediate obscurity. 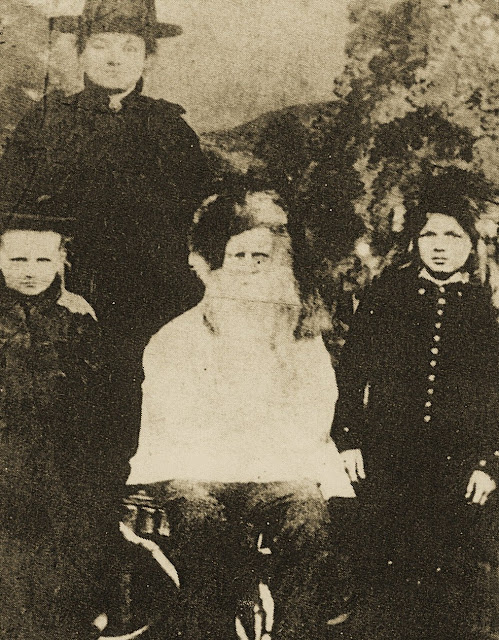 Dr. Price with his young wife Gwenllian Llewelyn and their two surviving children, Penelopen and the second Iesu Grist.


In 1881 the now elderly Price with his famous long beard took a new partner, a 21 year old farmer’s daughter named Gwenllian Llewelyn.  Despite his previous declarations against marriage, he wed her in a Druidic ceremony on March 4, 1881.   In 1883 Gwenllian gave Price the ill-fated son who died after only five weeks of life.  Together they would have two more children, including a second Jesus Christ and a daughter Penelopen.

Price died on January 23, 1893 after drinking a final glass of Champaign.  On January 31 10,000 people gathered to watch him be laid on a pyre of two tons of coal beside the spot where his son was burned.  By all accounts it was a spectacular sight.

Gwenllian abandoned Druidism, married the road inspector for the local Council, was baptized Christian, and changed her son’s name to Nicholas. 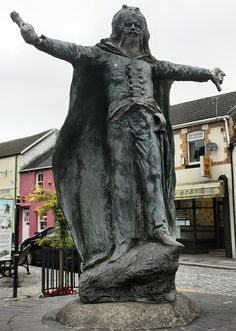 The statue of Dr. William Price in Llantrisant.


Today Price is a kind of folk hero in Wales.   A statue of him was erected his long-time home of Llantrisant in 1982, depicting the doctor in his characteristic fox-skin headdress, arms outstretched in an odd Christ-like pose.

Posted by Patrick Murfin at 6:15 AM