Silent Death from the Sky—Total War Makes its Bow 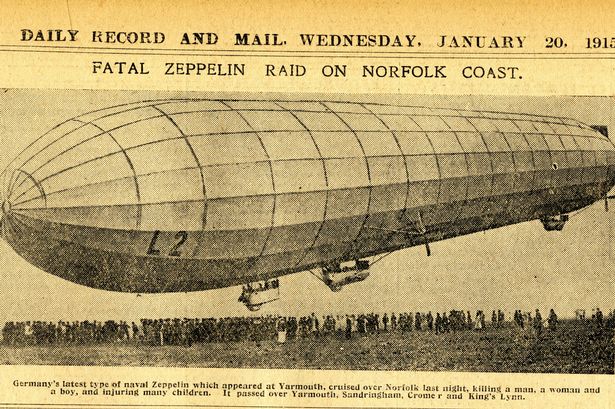 They were the pride of Imperial Germany, the very symbol of the industrial and technological superiority that seemed destined to make it the undisputed supreme world power and absolute master of Europe.  The giant Zeppelin airships designated with unsentimental Teutonic efficiency simply L3 and L4 were hauled from their enormous hanger sheds in the dawning of January 19, 1915 in Fuhlsbüttel.  Each was laden with enough fuel for more than 30 hours in the air and armed with eight explosive bombs and 25 incendiaries then cast off on a fateful mission.

That mission was personally approved by Kaiser Wilhelm II himself.

The war touched off with the assassination of the heir to the comic opera throne of a fading empire just 17 months earlier had not gone as expected.  Instead of a war of advancing armies and brilliant maneuver coming to a quick conclusion against a soft enemy like the glorious triumph of the Franco-Prussian War, things had bogged down to a stalemated meat grinder in muddy trenches stretching for hundreds of miles.  The triumphs of industrial efficiency—machine guns, multi-shot bolt-action rifles capable of rapid and sustained fire, powerful heavy artillery capable of astonishing accuracy over long distances, the frightening introduction of poison gas, and the newfangled airplanes that could provide accurate reconnaissance and increasingly be used to attack ground troops—had made maneuver, generalship, and the gallant charge obsolete.  It turned out that the lessons for this war should have come from the grinding disaster of the Crimea or the stalemate before Petersburg in the waning months of the American Civil War.

The Kaiser decided that to end the war he had to reach over the lines and smite the enemy population in their secure homes.   It would, he was convinced, destroy moral of his main enemy, the British and cause the civilian population to rise and demand peace.  He ordered his prize air ships to attack “military and industrial buildings” in England.  In fact, the Emperor, his Generals, and the crews of the Zeppelins all knew that bombs were going to fall on civilians. 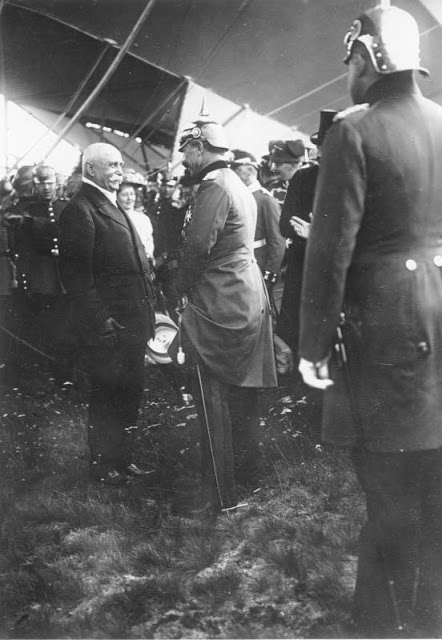 
It was almost 3 am local time when the mighty airships passed over the English coast at Norfolk.  Then the two ships parted, each turning to their designated target in the pitch black night.  Along their flight route each dropped incendiary devices for illumination to find the roads and rail lines they needed to guide them to their targets.  A few sheep and local farmers were frightened, but no one knew where the eruptions were coming from, and sparse telephone and telegraph connections could not be made to raise a general alarm.

The L3 made for Great Yarmouth, a fishing port of negligible military significance.  The L4 searched for King’s Lynn more than 50 miles west on the north coast where the River Great Ouse empties into a wide bay.  It was a medieval town, a market village, and a very minor port.  It, too, had no military significance.

Each of the Zeppelins arrived over their targets in near silence and unleashed their remaining incendiaries and explosive bombs.  In each case it was over within moments.  The stunned citizens of the two towns suffered a combined total of nine dead, scores injured and a handful of buildings, mostly residential housing, damaged.  The L4 and L5 each passed once over their target towns then made wide turns over the English countryside and returned to Germany in undisturbed dignity.

Although damage and casualties were light, the Kaiser was right about the effect on English moral.  The raids and others like it in coming months caused something of a panic, which grew as no effective early air raid warning system could be established and no ground fire air defense seemed effective.  Combined with the horrifying long columns of casualty lists published in every daily newspaper, peace sentiment particularly among the working class grew alarmingly. 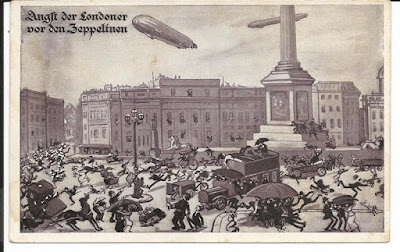 
At first the Kaiser forbad the extension of the raids to London, supposedly out of fear for the safety of his cousins in the Royal Family.  In February he allowed an attack on a real military target, the London Docks, but ordered his crews to continue to avoid the city itself.

Finally, out of frustration, he targeted the enemy capital.  The first successful raid there was launched on May 31, 1915.   Although several airships were damaged or crashed, mostly due to inclement weather, none had yet been shot down by what was becoming known as anti-aircraft artillery.

The biggest raids of the war were loosed on London on October 18 in which 71 people were killed and 128 injured, including 17 who died when a bomb struck a packed theater.   That was the last raid of the year as rough weather over the Channel was making crossings increasingly hazardous to resume.  The 20 raids in 1915 dropped 37 tons of bombs, killing 181 people and injuring 455. 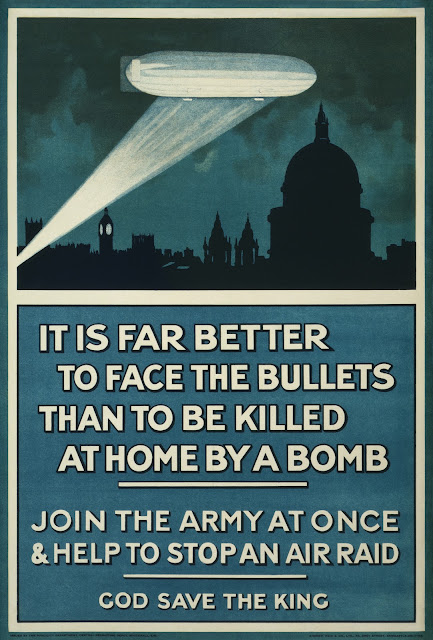 The British turned the raids into propaganda fodder of their own to encourage enlistments.


When improved weather allowed the bombing campaign to resume the next year, the British finally began to develop an effective defense.  First, searchlights were introduced to illuminate the huge targets and a class of 4 inch guns were remounted on swivels making them much more accurate and able to track the moving targets.  In mid-year the British introduced the use incendiary bullets fired by swarming Royal Flying Corps (RFC) bi-planes.  The incendiary bullets pierced the Zeppelin gas cells inside the envelope igniting the hydrogen explosively. For the first time airships were being brought down in aerial combat in addition to those shot down by anti-aircraft fire and lost to harsh weather.

There were sporadic raids in 1917 and ’18 but the heyday of the airships as offensive weapons was past.  Over four years of use there were 52 raids on Britain killing more than 500, the vast majority of them civilians.  Hundreds of thousands of Pounds of damage were sustained.  British moral wavered as a result but did not break.  Indeed, after people began to know what to expect and the shock wore off, despair turned to defiance. 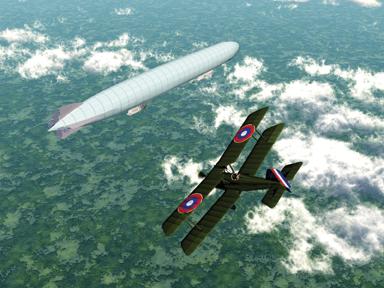 
World War I might have been the end of Zeppelins as bombers, but it was just the dawning of the age of so called strategic bombing.  By the time the next Great War broke out, technology had revolutionized fixed-wing aircraft and munitions enabling industrial scale slaughter of unimaginable efficiency.

Today cruise missiles and drones do much of the dirty work.  But it all started with those Zeppelins.