The Troubled Present and Modest Beginnings of the Winter Olympics 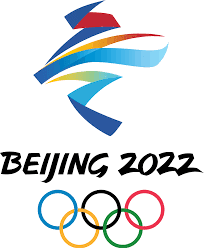 Next week on February 4 the XXIV Olympic Winter Games will kick off with an elaborate, self-congratulatory Opening Ceremony at the Bird’s nest a/k/a the Beijing National Stadium.  The games will be held amid even more controversy and drama then have become customary for modern Olympiads.  In protest to rampant human rights violations in China, especially the repression of the Muslim Uyghurs—some charge genocide—in the country’s far northwest, suppression of Hong Kong protests in 2019 and ’20, and a general harsh suppression of speech, art, and even the mildest protests, the United States and many of its Western friends and allies announce diplomatic boycotts of the games meaning that no government dignitaries or officials will attend.

Just this week NBC and its related cable channels announced that they would not even be sending anchors or on-air reporters and commentators to the games despite having invested a fortune in broadcast rights and relying traditionally high ratings to boost viewership and ad revenue.  Major corporations have canceled or plan to cut back advertising during the games.  Anchors and commentators will be based in a New Jersey studio relying on international video feeds from China.  Presumably at least some producers and crews will be in China to facilitate interviews with athletes and some of the human interest pieces that have become a staple of the games.

NBC News will send reporters, but probably not anchor Lester Holt.  They will be prevented from much if any coverage outside of the venues and will not be able to cover human rights or environmental stories. 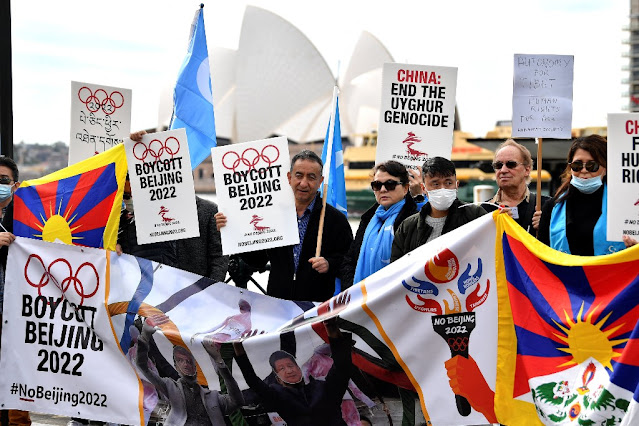 A protest in Sydney, Australia demanded a boycott of the Beijing Olympics over the Uyghur Genocide.

All of this is set against the background of the raging Coronavirus Pandemic and the exceptionally contagious Omicron variant.  China, of course, was the origin of the Covid-19 infection which it brought largely under control domestically with a campaign of vigorous disinfection and lock-downs often enforced brutally.  Authorities have been quick to respond of Omicron cases and outbreaks with similar measures, including shutting down entire cities, residential buildings, hotels, and workplaces often without even making provision for food, water, or bedding.  International visitors and everyone associated with Games are tested repeatedly.  No international audiences or family and friends of athletes will be allowed.  Some teams and individual athletes have pulled out of the games for fear of infection or because they refuse vaccination and/or testing.

China hopes to demonstrate that its authoritarian system is superior to Western democracies in dealing with Coronavirus crisis.  Despite these efforts at least 200 individuals associated with the games have tested positive and been placed in strict isolation.

The Games, which are supposed to promote international peace and understanding, also comes as Russia threatens an invasion of Ukraine, both traditional Olympic powerhouses.   An outbreak of war would certainly disrupt the Games.

But 98 years ago, the Winter Games had a far less troubled, if modest origin. 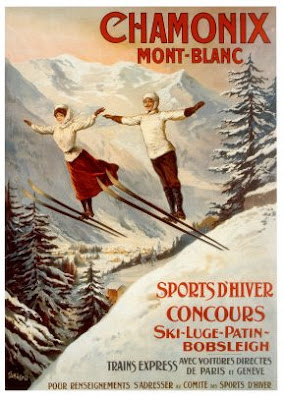 Poster for the Winter Games retroactively designated as the first Winter Olympics.

On January 25, 1924 athletes from 16 nations gathered at the foot of Mont Blanc in Chamonix, and Haute-Savoie, France for an International Winter Sports Week.  The event was considered by its host, the French Olympic Committee, to be an informal extension of the Olympics Games held that summer in Paris.  It was in response to a clamor, particularly by Nordic countries for an international venue for amateur winter sports.

It was only after the conclusion of the successful games that the International Olympic Committee (IOC) decided to formally inaugurate the Winter Games at their meeting in 1925, that they retroactively proclaimed the Chamonix games the I Olympic Winter Games.  Thereafter the games would be held every four years in the same years as the Summer Games—interrupted by World War II—until 1994 when the current schedule of holding the game two years after the last Summer event was adopted.

The French event was not, however the first time some winter sports were part of Olympic games.  Figure Skating had been an Olympic event in both London and Antwerp, and Ice Hockey was contested in Antwerp on indoor rinks.  Obviously those events which had to be held outdoors could not be accommodated in a normal Olympic schedule. The first games were totally dominated by Nordic teams.  Norway won four Gold Medals and 17 total medals, Finland had four Golds and 11 total.  The United States only took a Gold in Speed Skating, a very distant Silver in Hockey, Silver in Lady’s Figure Skating, and a Bronze for Men’s Ski Jump.  But that was better than the hapless home team, despite fielding the second largest number of athletes.  The French won just three Bronze medals, one of them not actually awarded until 2006.

Curling had been presented during the games but was not considered an official sport.  In 2006, the IOC retroactively awarded medals to the 1924 curling teams after an appeal on behalf of the victorious British by a Glasgow newspaper. 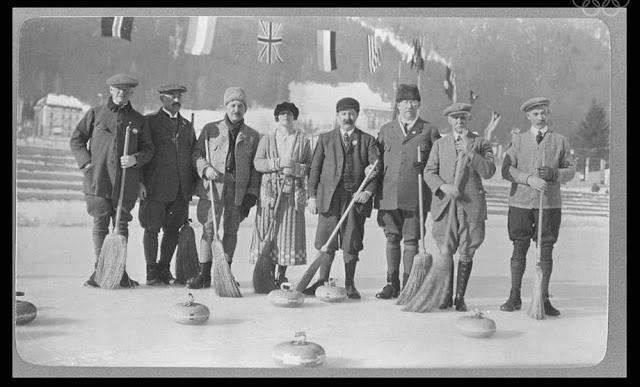 An unofficial sport at the games, curlers were finally awarded medal for the competition in 2006.  Note the woman on this team--the only event in which women competed along side men.

The Curling medals were not the only ones awarded tardily.  When officials in 1974 discovered a mis-entered score in a ski jumping event, American Anders Haugen was elevated from fourth place to third and the 86 year old athlete finally received his Bronze.

The last medal presented during the competition was awarded to a sport that was not even contested during the games.  The French Olympic Committee presented a Gold Medal for alpinisme to Charles Granville Bruce, the leader of the expedition that tried but failed to climb Mount Everest in 1922. 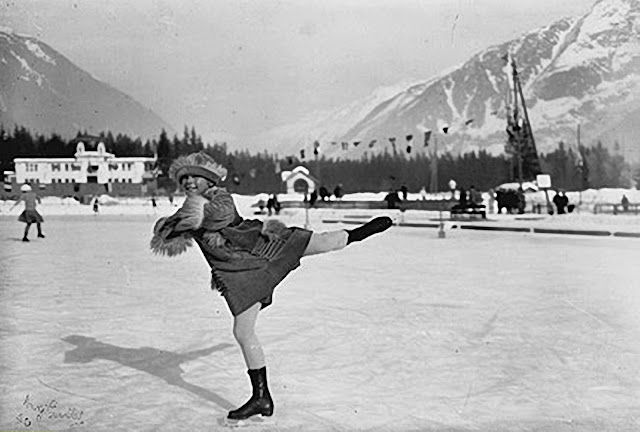 Norway's 13 year old Sonja Henie placed last in 1924  but was the darling of the games.  She went on to win Gold Medals in the next three Winter Games and a career in Hollywood movies.

In Figure Skating Sweden’s Gillis Grafström became the first—and last—individual to successfully defend a Gold Medal won at a previous Summer game, Antwerp in 1920.  He would go on to notch a third win in 1928 and a Silver in 1932.  On the distaff side 11 year old Sonja Henie skated for Norway.  She finished last but became the darling of the competition.  She would go on to win the next three consecutive Gold Medals, a career as one of the highest paid movies stars in Hollywood, and the first ice show queen.

Then there was Ice Hockey.  The Canadians, like Grafström defending Gold won at Antwerp, achieved the most devastating complete domination of an event in Olympic history, Summer or Winter.  They finished their qualifying round with 4 wins, and a total score of 110–3 against Switzerland, Czechoslovakia, Sweden, and Great Britain then breezed to a win topping the U.S.  This domination continued through most of early Olympic history.  The Canadians won six of the first seven Gold Medals.  Frankly, the whole country has had a swelled head and been a dick about this ever since. 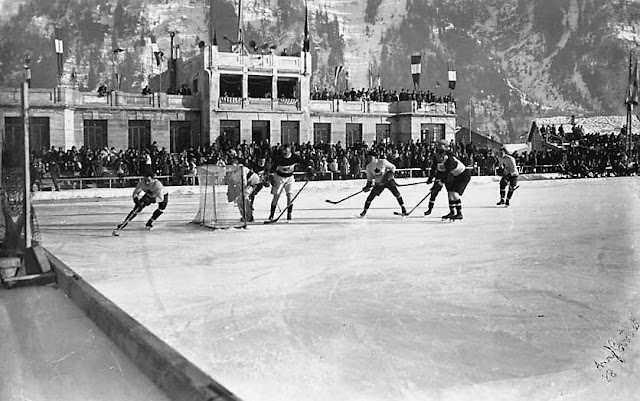 The Canadian beating the shit out of the British in Ice Hockey.

All-in-all it was an exciting and successful week of completion.  Unlike the enormously expensive Summer games that year in Paris, the winter events even turned a modest profit.  They helped popularize winter sports in Europe and North America.  Not a bad debut.

Posted by Patrick Murfin at 8:59 AM