Listen Up!—Dr. King Still Speaks to Us if We Will Listen 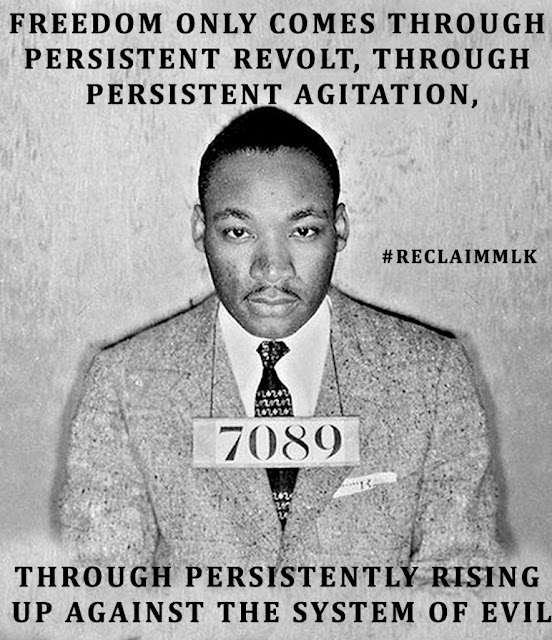 Note:  Today is the actual birthday of the Rev. Martin Luther King, Jr.  The public Holiday in his honor will be held next Monday, January 17.  I will have more to say about that then in my annual rant.  Today I a resurrecting a post in which Dr. King reminds us himself how truly revolutionary he was.

When the Reverend Martin Luther King, Jr. was being held in jail in Alabama in 1963 he received a letter signed by several well-known White self-proclaimed racial moderates and liberal ministers who decried the unpleasantness and social disruption of the on-going campaign against racial discrimination in Birmingham.  Since he had unaccustomed time on his hands he took the time to patiently, even lovingly explain the situation in America’s most segregated city and why he and the Black citizens of the city were compelled to launch their campaign of non-violent direct action braving beatings, dogs, firehoses, threats, bombings, and jail to do so. 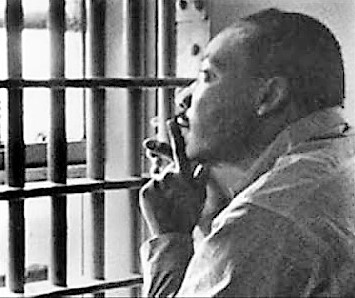 Dr. King in the Birmingham Jail.


But he also chastised the ministers’ smug assumptions and refusal to either take any risks to attack the underlying cause of the unrest or dirty their hands in labor to correct it.  “Shallow understanding from people of good will is more frustrating than absolute misunderstanding from people of ill will. Lukewarm acceptance is much more bewildering than outright rejection.” He said that the white church needed to take a principled stand or risk being “dismissed as an irrelevant social club.”

That message could not be more pointed or relevant today.  The decedents of those nervous and alarmed clergy can still be found in too many pulpits and among too man “good Christians” who in today’s moral crisis fret that the simple declaration of the fact that Black Lives Matter is somehow racist; that a broken window, scuffle with police, or the disruption of holy commerce is somehow more terrible than Black bodies in the streets or whole communities living in the terror of a virtual occupation.  Ministers who do speak out, even in many liberal congregations face backlash from both pledging members and the wider communities in which they must work.

And this year the timidity of some Democrats and liberals to finally bring the Freedom to Vote Act and the John Lewis Voting Rights Advancement Act to a successful vote and passage is a stinging reminder of the cost of fair weather friends and hypocrites.

If he had lived the Reverend Martin Luther King, Jr. would have turned 93 years old today.  Nothing would have surprised him more.

Most folks know and can quote snatches of two or three of his most famous speeches.  The TV will play clips of the I Had a Dream speech given at from the steps of the Lincoln Memorial at 1963’s March on Washington for Jobs and Justice.  Maybe they will also show a tad of his prophetic I Have Been to the Mountain Top speech given to a church audience in Memphis the night before he was killed.

His more devoted fans treasure other things, perhaps most notably his Letter from the Birmingham Jail.  But that still make liberals uncomfortable.

The quotes most apt to surface are about non-violence or his blander paeans to brotherhood.  That’s because the largely White establishment media wants to use his birthday and the official holiday as a sop to Blacks on one hand and an only thinly veiled, almost hysterical plea to them “Don’t hurt us!” on the other.

Today, I would like to celebrate with a collection of quotes from Dr. King that illustrate exactly how radical, even revolutionary, he was.  Let him speak for himself.

Change does not roll in on the wheels of inevitability, but comes through continuous struggle. And so we must straighten our backs and work for our freedom. A man can’t ride you unless your back is bent.

Every man must decide whether he will walk in the light of creative altruism or in the darkness of destructive selfishness.

Have we not come to such an impasse in the modern world that we must love our enemies—or else? The chain reaction of evil—hate begetting hate, wars producing more wars—must be broken, or else we shall be plunged into the dark abyss of annihilation.

History will have to record that the greatest tragedy of this period of social transition was not the strident clamor of the bad people, but the appalling silence of the good people.

Human progress is neither automatic nor inevitable... Every step toward the goal of justice requires sacrifice, suffering, and struggle; the tireless exertions and passionate concern of dedicated individuals.

I have decided to stick with love. Hate is too great a burden to bear.

I submit to you that if a man hasn’t discovered something that he will die for, he isn’t fit to live.

It may be true that the law cannot make a man love me, but it can keep him from lynching me, and I think that’s pretty important.

Philanthropy is commendable, but it must not cause the philanthropist to overlook the circumstances of economic injustice which make philanthropy necessary.

Property is intended to serve life, and no matter how much we surround it with rights and respect, it has no personal being. It is part of the earth man walks on. It is not man.

That old law about “an eye for an eye” leaves everybody blind. The time is always right to do the right thing.

The hottest place in Hell is reserved for those who remain neutral in times of great moral conflict.

The past is prophetic in that it asserts loudly that wars are poor chisels for carving out peaceful tomorrows.

We are not makers of history. We are made by history.

Posted by Patrick Murfin at 8:06 AM