It’s the Birthday of the Democratic Party 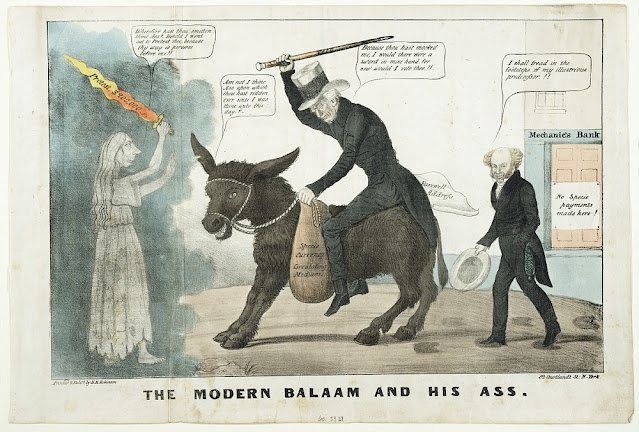 This early anti-Jackson cartoon lampooning his anti-bank policies shows a loyal Martin Van Buren cleaning up after Old Hickory's jackass.  It was one of the earliest, if not the earliest, uses of the donkey as the symbol for the Democratic Party.  But it didn't take immediately.  Anti-Democrat cartoonist Thomas Nash used the Tammany tiger as the party mascot at first.  The Democrats did not embrace the donkey until well into the 20th Century, long after the GOP had adopted the elephant.

The Democratic Party was founded at a Baltimore convention 195 years ago on January 8, 1827.  You may celebrate or lament the occasion depending on your viewpoint.  It was cobbled together from elements of the shattered Democratic Republican Party founded by Thomas Jefferson and James Madison which had dominated American politics since the Revolution of 1800 and the virtual disappearance of the Federalist Party after the War of 1812.  The wizard of the new alignment was the boss of the New York State political machine known as the Albany Regency, Martin Van Buren, in the service of a charismatic leader—General Andrew Jackson. 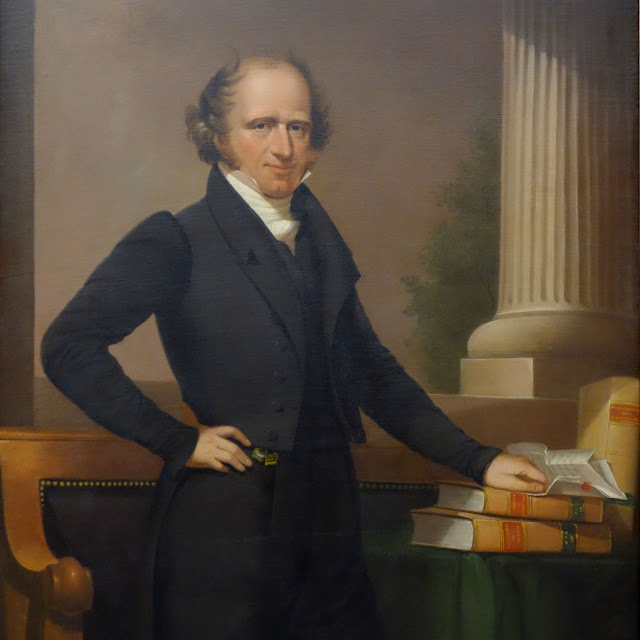 Martin Van Buren, master of the Albany Regency and shrewd political operative, who organized the Democratic party as Jackson's creature.

The election of James Monroe, the last of the Virginia Dynasty of Founder Presidents after the collapse of the Federalists in 1822 ushered in what historians have called the Era of Good Feeling due to the lack of competition for the Democratic-Republican.  The domination was so deep that even John Quincy Adams, the son of the only Federalist president, had joined the ascendant and served a Monroe’ Secretary of State and was his heir apparent to the Executive Mansion.

Unfortunately for Adams, he had incurred the wrath of the tempestuous general who mistakenly believed that the Secretary of State had been behind a court martial for illegally invading Spanish Florida and executing to British citizens who he believed had been arming rebellious Creek warriors.  It’s a long and complicated story but the truth was that although Adams was aghast at Jackson’s behavior which complicated efforts to acquire Florida by purchase and threatened a possible new conflict with Great Britain, he had come to Jackson’s defense against the charges. 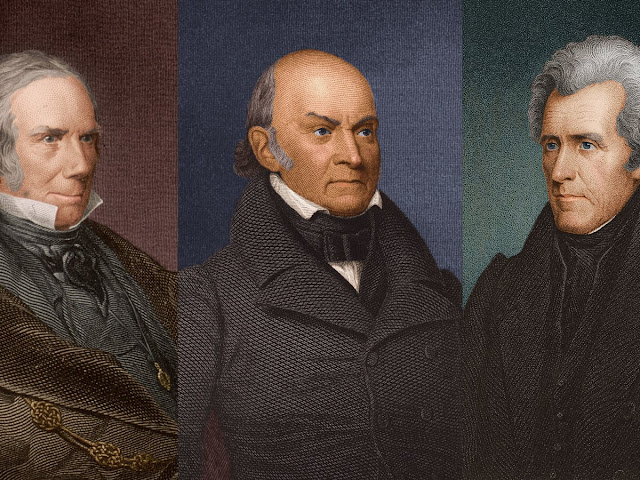 Three of the main actors in the 1824 Presidential Election drama--Kentucky's Henry Clay who swung support to John Quincy Adams (center) in House of Representatives and was appointed Secretary of State and General Andrew Jackson.  Adams won a Pyrrhic victory.

Whatever the truth, Jackson vowed revenge by running against Adams in the election of 1824.  Jackson was the greatest military hero since George Washington and wildly popular in the South and West.  In a head-to-head contest Jackson would have won handily, but two others also entered the race—Georgia’s William Crawford, a Jeffersonian “Old Republican” and another Westerner and rising political star Henry Clay of Kentucky.  Although Jackson led winning the popular vote, carrying 11 states and winning 99 Electoral College vote with Adams behind with 7 state wins and 86 Electoral votes, the other two candidates each won 3 states and enough votes to deny a majority and Electoral College win.

The election was thrown into the House of Representatives where each state delegation cast a single vote.  Only the top three candidates—Jackson, Adams, and Crawford—were included in the House Vote.  Clay not so secretly rallied his former supporters for Adams who carried the House vote by a lop-sided margin.  Jackson was outraged, especially after Adams selected Clay to be his Secretary of State and by tradition a virtual heir apparent.  Jackson charged a “corrupt bargain” had been struck by Adams and Clay to win the election.

Meanwhile in New York State, Van Buren’s Albany Regency had finally gotten the upper hand against the Clinton political organization in New York City which had long led half of a political axis of the two most populous states, New York and Virginia, in support of the Jeffersonian party.  He saw a national ally in Jackson and began quietly organizing key political figures and operatives in every state in support of Jackson.  That led to the founding convention in Baltimore in time to organize behind Jackson and against Adams in the election of 1828.

Running as a man of the people, painting Adams as aristocratic, and backed by an effective political organization humiliated and swamped the incumbent by an Electoral College vote of 178 to 83 carrying 15 states to 9.  The policies of Jackson and his party were in favor of individual liberty (for white men), limited government (except where Jackson himself chose to execute power, opposition to the Second Bank of the United States, opposition to federally funded internal improvements advocated by Henry Clay, rapid Western expansion, removal of Native Americans from east of the Mississippi River, and lowered tariffs. 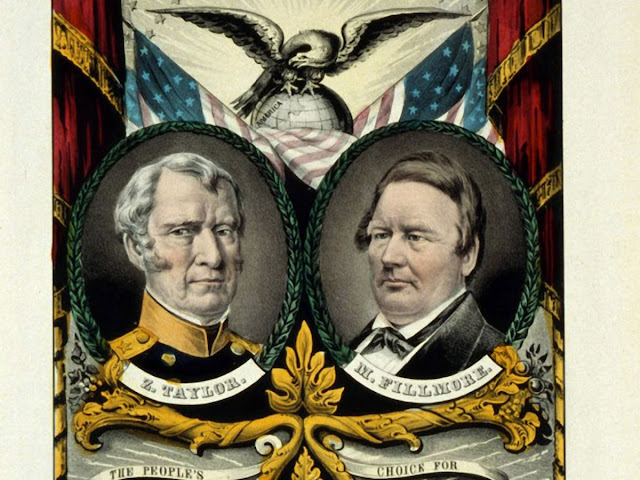 A campaign banner for the last Whig Presidents.  Mexican War Hero Zachary Taylor died in office after splitting the Whigs over the extension.  Northerner Fillmore proved more amenable to Southern interests in the name of national unity and became a perpetual contender for being the worst president in American history, at least until the last Resident.

Both Jackson’s policies and abrasive leadership style alienated many who began to coalesce into a new anti-Jacksonian party, the Whigs.  It was an inherently unstable and contradictory collection—remnant old New England Federalists like Daniel Webster, business interests appalled by the destruction of the Bank of the United States and resultant currency instability and wildcat banks leading to periodic financial panics, advocates of Clay’s American System of internal improvements, and largely aristocratic Southern Jeffersonians.

After Jackson threatened to use military force against South Carolina in the Nullification Crisis over the Tariff, his own Vice President, Southern firebrand John C. Calhoun joined the Whigs asserting states’ rights—and expansion of slavery into all new territories and states.  The combination of pro-slavery Southerners and anti-slavery New Englanders made the Whigs a feeble coalition.  Democrats continued to dominate the Presidency and national politics up to the Civil War with only two Whig presidential victories, both by military heroes who quickly died in office and left weak vice-presidents with little or no party loyalty in charge.  The Whigs imploded and disappeared after Winfield Scott’s loss to Democratic nonentity Franklin Pierce in 1854.  Eventually the Republicans emerged as a new major party leading to the victory of Abraham Lincoln in 1860 when Democrats split three ways over slavery issues. 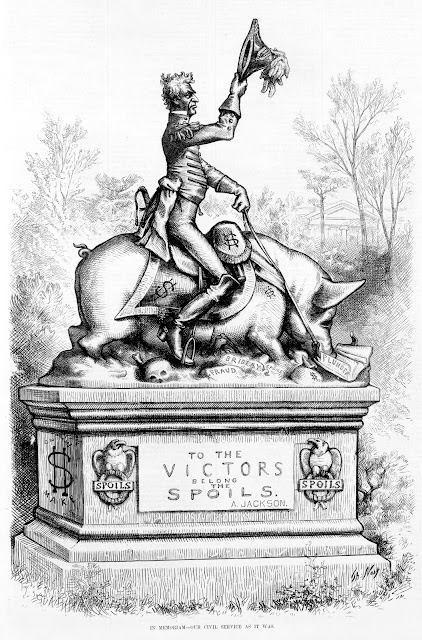 This illustration for a Civil Service reform publication in the 1880's celebrated Jackson as the founder of the Spoils System.  But at that time Republican administrations reaped the benefit of the system.

The Democrats long thrived on Jackson’s spoils system which replaced almost all Federal employees loyal political appointees who provided an army of campaign workers in every corner of the country.

The Democrats are now the oldest electoral party in the world by a wide margin, but they have flipped positions many times over their long history.  They were the backbone of the Jim Crow Era in the South and began to make strong inroads in big Northern cities with ethnic-based political machines.  They were for hard money and against greenback Treasury notes.  With Republicans in national ascendancy, the party suddenly became advocates of civil service reform. 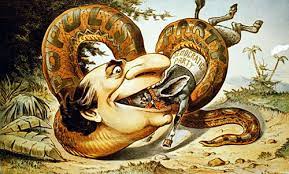 Despite this dramatic cartoon, William Jennings Bryan never really swallowed the Democratic Party even after he won nomination on a populist free silver platform.. Progressives remained an important, but minority part of the Democratic coalition.

In the 1890s a large portion of Democrats in the West and South became populists in favor of the “free coinage of silver” against a pure gold standard that made cash scarce and kept prices high; agitated for railroad rate reform and against monopolies, and in favor of democratic reforms like voter referendums and recall elections.  They continued to be in contest to business and hard money conservatives.

In the early 20th Century, they began to attract support of major labor unions and vied with the Socialist Party for others.  Woodrow Wilson, a Democratic party progressive, enacted some major labor reforms in the areas of child labor, job safety, and working hours.  Yet the same administration violently crushed World War I strikes and led the worst domestic suppression of dissent in the post-war Red Scare years.  Wilson became a hero to liberals for his post-war vision of the Fourteen Points and for the League of Nations.  Democrats largely became advocates of international action and against isolationism.  The establishment of the Federal Reserve System put the party firmly behind national banking.

Opposition to draconian Republican immigration restrictions in the 1920’s and in favor of the repeal of Prohibition earned the loyalty of many working class voters. 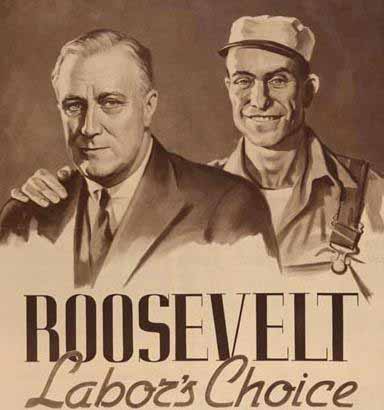 In the face of the Great Depression Franklin Roosevelt’s New Deal put an end to Jacksonian limited Federal powers.  The President and his party borrowed heavily from old Socialist Party platforms to enact Social Security and unemployment insurance, guarantee labor union rights, use public works programs, and many other popular reforms.  Even Southern Democrats bought in as long as Blacks were largely excluded from the benefits.

World War II and its aftermath created support for a vast standing armed forces with virtually unlimited funds for new arms and weapons and backed world-wide interventionism whenever American—read business—interests might be threatened.

The Civil Rights Movement gained steady support among national Democrats and Lyndon Johnson’s signing of the 1964 Civil Rights Act began the process of Southern Democrats abandoning the party for the Republicans who had gone from the Party of Lincoln to states’ rights fan and were increasingly willing to employ wink-and-nod code words in favor of white supremacy.  By the 21st Century that process was complete.

Meanwhile opposition to the Vietnam War led to growing anti-war sentiment through much of the party and peace advocates continued to struggle with cold-warriors and interventionist.  Widespread support for the Equal Rights Amendment, gender protections under Civil Rights law, and for abortion rights led to a steady swing of women, particularly college educated and middle class women, from the Republican to the Democrats who now enjoy a substantial edge in that demographic.

Blacks have become the most loyal Democratic party supporters by a wide margin and Latinx voters with the exception of Florida Cubans also reliable.  Together with the college educated and youth voters they elected Barack Obama as the first Black President.

Recognizing that expanding the voter pool worked against them, Republicans have become relentless in attempting voter suppression, gerrymandering, and other attacks on access to the polls.  Meanwhile they have exploited resentments of many working class voters who believe they have been insulted and ignored by an elite cabal robbing complacent and ineffective Democratic Party leadership of once solid support. 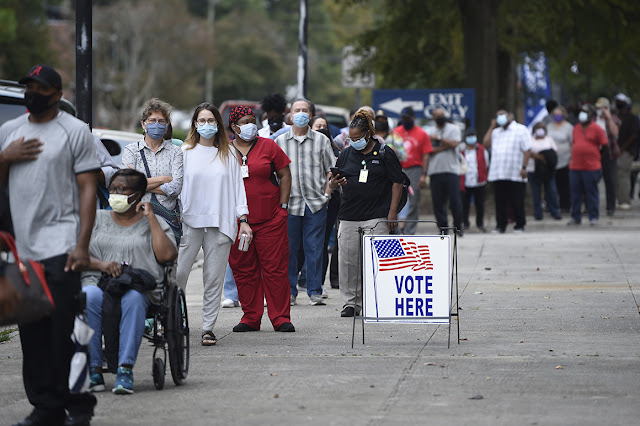 Black voters turned out in droves in 2018 despite elaborate Republican voter suppression efforts like the ones in Georgia that closed convenient polling places in minority areas causing long lines and waits.  Democratic support for voting rights protections continue to be important to them.

Democratic Socialists have become a growing part of the party in Congress and scoring electoral victories around the country.  Their policies are aimed at, among other things, winning back working class support by providing life-changing new benefits.  Party so-called centrists fret that they will be labeled communists or that powerful business backers of the party will turn on them. 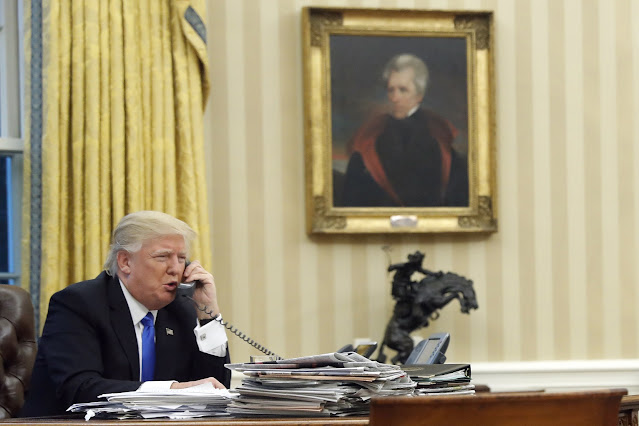 The former Fraudster in Chief kept a portrait of Andrew Jackson over looking his Oval Office desk.  His other political role modal  was Adolph Hitler whose Mein Kamf  he long kept on his bed table for inspiration.

However that struggle turns out, the Democratic Party today bears almost no resemblance to the one founded by Van Buren and Jackson.  But it is telling that Jackson was the Orange Menace’s favorite president roll model.  Both shared fragile egos, inflated self-importance, and dictatorial impulses.  And both have political parties personally loyal only to them.