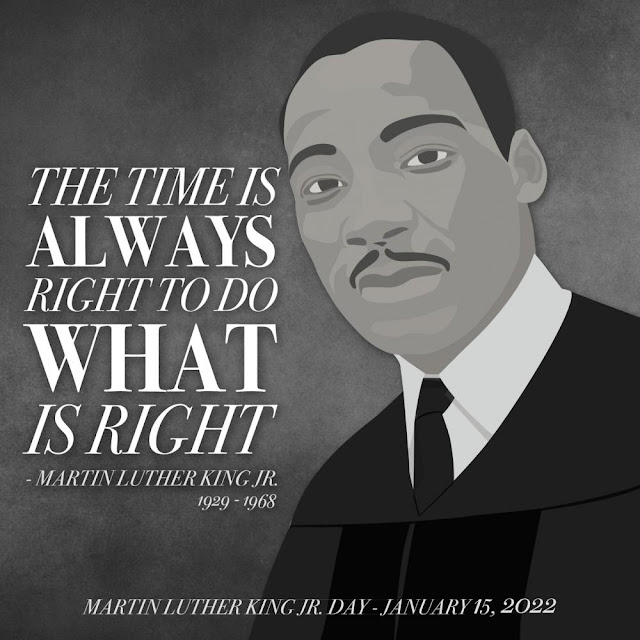 Note:  I have posted this in one form or another on or around the Martin Luther King Day Federal Holiday for 11 years.  Long time readers may be sick of it.  Some of those who were offended in earlier rounds have left the building in a huff—or come to see that maybe it was not so far off the mark after all.  The thing is, year by year, it becomes more relevant.

Today is the Federal Holiday celebrating the Rev. Dr. Martin Luther King, Jr. He was born on January 15, 1929 and was asasinated on April 4, 1968 in Memphis, Tennessee.  It was a long, hard fought effort to create a federal holiday, following proclamations in several states.  President Ronald Reagan signed the legislation creating the holiday in 1983 and it was first celebrated nationally in 1986.  The senior George Bush moved the date to the third Monday in January.

Despite the national observance, several states refused to enact state proclamations. After a national economic boycott threatened the Super Bowl in Arizona, the holiday was officially observed in all 50 states for the first time in 2000.

Depending on your state, schools may or may not be open.  It they are you can count on some kind of touchy-feely programming that will assure children that once, long, long ago things weren’t so nice for Black people, but thanks to Dr. King everything is just fine now.  A tremendous amount of time will be spent emphasizing his non-violence and schools now routinely use the occasion as a center piece in their violence prevention programs.  They will also emphasize tolerance of those who are different—which it turns out may be the red-headed kid or the girl with a lisp.

As laudable as these things are, children are not apt to be told that their grandparents may just have been the ones doing the oppression of Black folk.  Nor are they given any real sense of Dr. King as a truly revolutionary figure willfully defying the power of the state, demanding true systematic change, addressing class inequality, and in time of war leading an opposition to that war. 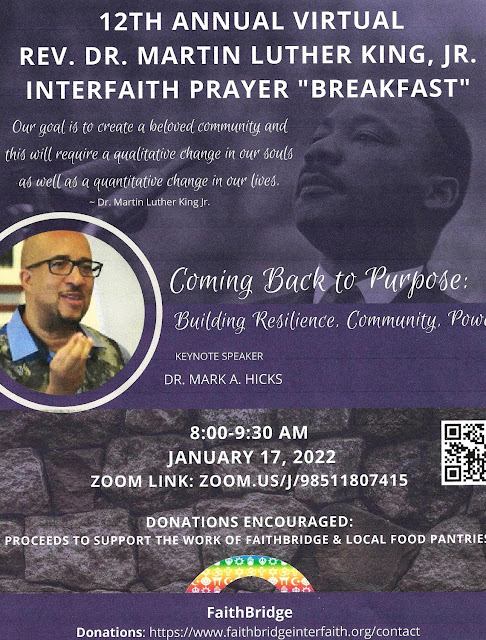 Despite my reservations about how events like this sometimes contribute to the blanding of Dr. King, I will be attending the annual Martin Luther King Day Prayer Breakfast in Crystal Lake sponsored by Faithbridge, a local multi-faith organization.  This year it it will be a virtual event on Zoom due to the raging Coronavirus pandemic.


In cities, towns, and villages across much of the country, there will be obligatory civic observations.  These most often take the form of prayer breakfasts, dutifully attended by local dignitaries of all races.  While some local Black preacher may take the occasion to lay out some harsh truths or even demand attention to continuing injustices, everybody will applaud politely.  Politicians will parade to the podium with bromides.  Someone—preferably the precocious son of a Black preacher—will intone words from the I Have a Dream Speech, and at the end maybe everyone will join hands and sing We Shall Over Come.  I bet you have been to just this kind of event.  Hell, I’ve even helped plan and put them on.

There will be nostalgic clips of the March on Washington on the news, maybe a documentary or two on Public Television.

Many of the people who hated Dr. King when he was alive or who are their spiritual descendants will blandly join in the celebrations.  And then they will turn his words against him.  When you hear a plump politico with a honeyed accent quote, as they all love to do, the one phrase from the I Have a Dream speech where he spoke about the little children being judged not on the color of their skins but on the strength of their characters, watch out.  That hack is about to use Dr. Kings words to attack that dream.  He will say that now that we have erased statutory discrimination, any lingering program that gives disadvantaged minorities the slightest leg-up is itself discriminatory.  He will claim that Dr. King would want a perfectly color blind society.  Unspoken is his deep conviction that in such a color blind society, white men will rise like cream and be restored to their rightful place on top of the ladder—as if they had ever really lost it. 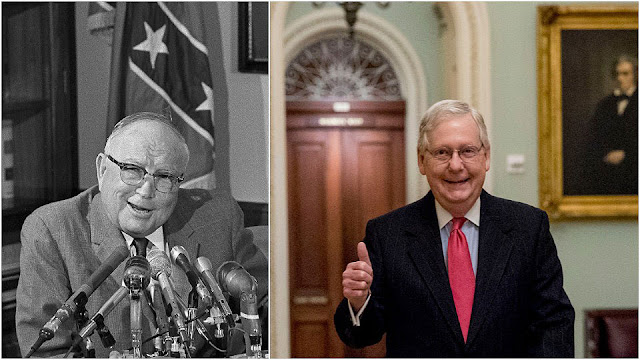 Senate Majority Leader Mitch McConnell claims to have attended the 1963 March on Washington and to have been inspired by Dr. King's famous speech.  James O. Eastland, a segregationist senator from Mississippi, was a key opponent of the 1965 Voting Rights Act.  McConnell, a Republican from Kentucky, is the key opponent of today's voting rights legislation.


In the last year of the former maladministration among the leading hijackers of Dr. King was the despicable Vice President Mike Pence.  In an appearance of CBS TV’s Meet the Press he actually quoted King to support trading Cheeto-in-charge’s phony Wall for temporary relief from deportation of the DACA Dreamers.

Dr. King will also be lauded for his non-violence, which will be translated into passivity.  Law breaking—including the kind the Civil Rights Movement routinely used—will be denounced.  No word will be uttered that Dr. King’s non-violence actually expected to provoke violent opposition and used that response to tweak the conscience of a democratic nation. 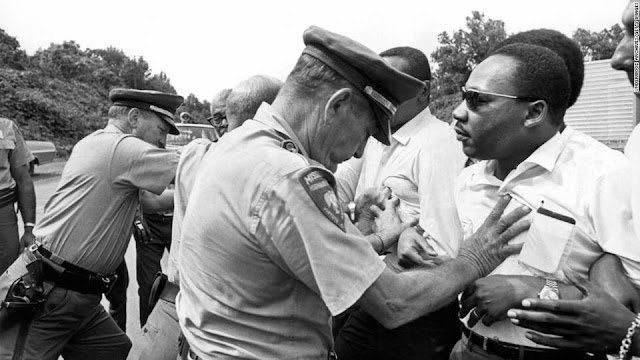 Dr. King's non-violence was aggressive and far from law abiding.


Since Dr. King’s time, police departments have been provided with new arms and tactics.  New crowd control methods and security provisions make the kind of marches, sit-ins, and demonstrations led by King either difficult or kept far away from threatening the safety of those being protested, as was seen repeatedly in attacks on the Occupy Movement, Black Lives Matter protests, and at Standing Rock. New restrictions on the press—and when that doesn’t work outright attacks, arrests, and physical intimidation—keeps reporters from fully reporting on acts of civil disobedience so that the public consciousness may be safely left un-tweaked.

A few of years ago, rising to a new level of audacious gall, a senior Pentagon official, in a program marking Dr. King’s birth at the Department of Defense, actually argued that the Nobel Peace Prize winner would understand and approve of the “work of our soldiers in Iraq and Afghanistan.”

We are told that because Dr. King was a faithful Baptist, he would not today support Gay, lesbian, and transgendered people and that it is a mockery to compare their struggle to the Civil Rights Movement.  The Black church is divided on this—even Dr. King’s children are—but it is hard to imagine his rejection of justice for them.

Likewise, some Black leaders will claim, especially in their own communities, that Dr. King fought just for them, that gains he fought for should not be extended to the growing Latino minorities that threaten to displace them as the most oppressed. 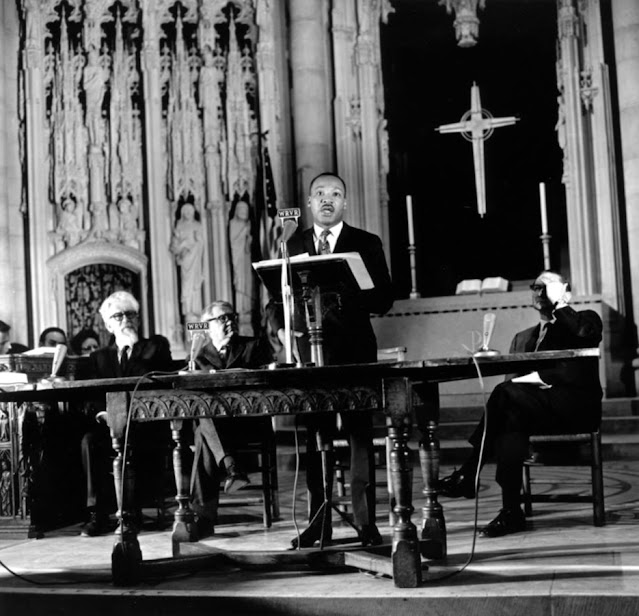 What is almost never mentioned? Dr. King's denunciation of the Vietnam War in his speech at New York's Riverside Church on April 4, 1967 turned many white liberals and most of the Democratic Party establishment against him.  He expected it would.  He spoke anyway.


All of this is possible because 50 years after his death Martin Luther King has been sanitized.  He has been scrubbed clean of the any semblance of actual humanity, any personal foibles or flaws, and midnight doubts or struggles of the soul.  He has become an empty vessel into which can be poured a safe and bland pudding which can placate pesky Blacks with a pat-on-the-head while protecting the status-quo.

Enough!  The real, flesh and blood Dr. King would have none of it.

Let’s remember him today for who he was, not who the charlatans want to make him out to be.  And let’s remember that as great as he was, he was one man.  Let’s not denigrate the truly historic sacrifices of thousands and thousands of ordinary people who repeatedly literally put their lives on the line—and continue to do so today.  Let’s celebrate him and them by rededicating ourselves to standing up as they did, by putting our bodies, when necessary, on the line to achieve his true dream of an equitable and just society. 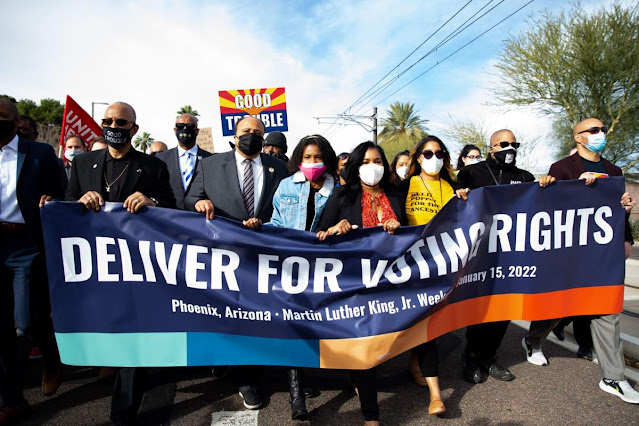 Martin Luther King III (under Good Trouble sign) led a march in Phoenix to protest Senator Kyrsten Sinema who's refusal to back a carve-out of the filibuster rule has been a dagger in the heart of voting rights protections.  He has called to cancel King Holiday celebrations of the Freedom to Vote Act and the John Lewis Voting Rights Advancement Act are not enacted.


And let’s embrace the new generation of committed and imaginative young Black leaders who are making sure America learns that Black Lives Matter and have energized new civil rights/economic justice movements like the Moral Monday Marches and the new Poor People’s Campaign.  Let us join them in demanding that the Freedom to Vote Act and the John Lewis Voting Rights Advancement Act be brought to a successful vote and signed into law by the President.  And if that does not happen let’s take to the streets with overwhelming determination.  If we are White, let us battle our own egos and fragilities, our fantasies of being White rescuers, commit to understand White privilege and systematic racism, and allow us to become true allies respectful of the leadership of the oppressed.