Have Yourself a Merry Little Christmas sung my Judy Garland to Margaret O'Brien in Meet Me in St.Louis.

We are closing in on the big day and haven’t honored some of the greatest secular songs from the Golden Age of American Christmas Music.  In particular we have been remiss in failing to share the greatest performance of a modern Holiday song ever.  Period. No arguments.  The crown goes to Judy Garland singing Have Yourself a Merry Little Christmas to Margaret O’Brien in the 1944 film classic Meet Me in St. Louis.

As the Coronavirus pandemic resurges and rages yet again, the throat catching melancholy of Garland’s performance is more resonate than ever.

In some ways the role of the second daughter Esther of the comfortably middle class St. Louis Smith family was a step back for Garland to the juvenile parts in which she had gained she had gained fame.  She had finally broken through to be cast as a young woman in Presenting Lilly Mars.  But here she was back to playing a love struck high school girl.

On the other hand, producer Arthur Freed was planning to biggest MGM musical to date in Technicolor and directed by studio ace Vincent Minelli.  In addition to Garland and O’Brien—the most popular child star since Shirley Temple—the cast included Mary Astor as Mother, Leon Ames at Father, Louise Bremmer as older sister Rose, and Tom Drake as the boy next door.  It also featured solid support by veteran character actors Henry Davenport, Marjorie Main, and Chill Wills. 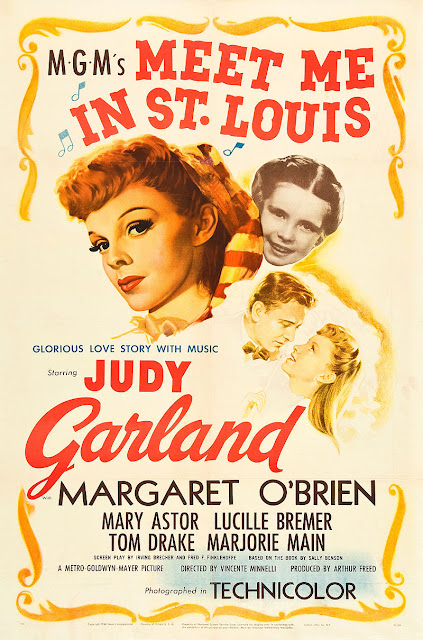 The film was adapted from auto-biographical short stories by Sally Benson originally published in The New Yorker.  It was divided into a series of seasonal vignettes, starting with summer 1903 of a year in the life of the Smith family in St. Louis, leading up to the opening of the Louisiana Purchase Exposition—the St. Louis World’s fair in the spring of 1904.

Journeyman songwriters Hugh Martin and Ralph Blane were commissioned to write songs for the film, although other composers were also expected to add numbers including Boys and Girls Like You and Me by Rodgers & Hammerstein original written for their Broadway musical Oklahoma! but cut prior to its opening.   The same fate befell the song when Minnelli reluctantly cut it because the film was running long.  Martin and Blane’s contributions became American classics and standards—The Trolley Song, The Boy Next Door and of course the Christmas song all sung by Garland.

Judy Garland herself intervened to demand important changes to the lyric of Have Yourself a Merry Little Christmas.  Martin’s original lyrics began, “Have yourself a merry little Christmas / It may be your last / Next year we may all be living in the past.”  She recognized that it was way too depressing to sing to the inconsolable child mourning the imminent departure of the family from St. Louis to New York City.  “I’ll look like a sadist,” Garland complained.  The words were changed to the now familiar “Have yourself a merry little Christmas/Let your heart be light/From now on your troubles will be out of sight.” 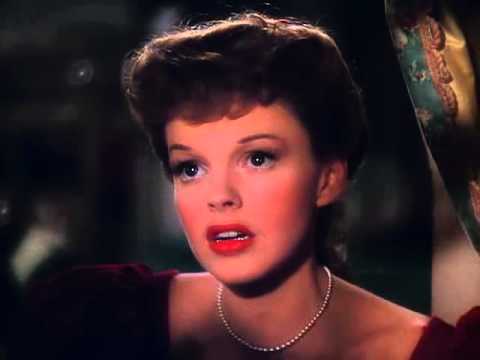 Garland was never more appealing or vulnerable than in this famous serenade.

A performer herself since the age of 3 and understanding the pressure that stage parents and the studio put children through, Garland formed a special protective bond with young Margaret O’Brien and spent much of her time off camera with the girl.  It was a memory they would both treasure and often talk about.

Garland never looked lovelier than she did in this film with her hair dyed auburn and smitten director Minnelli literally caressed her face on screen.  The young actress and the middle-aged director fell in love on the set and were soon married. 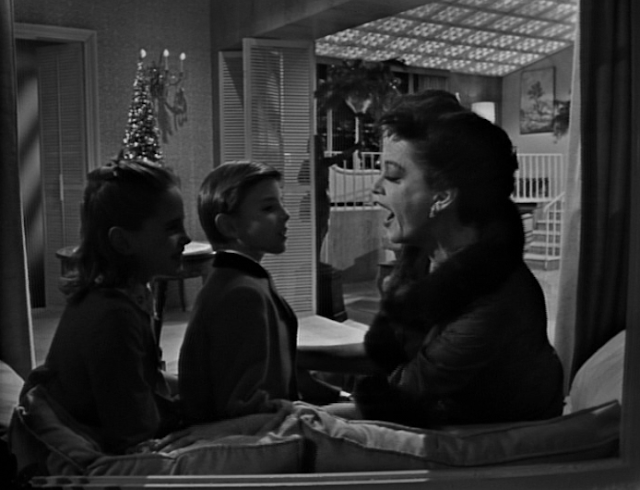 In 1966 Garland reprised the song on her CBS Television series singing it to here younger children Lorna and Joey Luft.  The episode is the most down-loaded of the shows on YouTube.

Many other versions of the song have been recorded.  Frank Sinatra had lyricist Martin revise the words to “lighten them up” from the still melancholy version sung by Garland for his 1957 album A Jolly Christmas.  The only version to come near to the power of Garland’s performance was by The Carpenters from the 1978 album Christmas Portrait.  Karen Carpenter nearly—but not quite—matched the original.