In the United States the exact moment of the Winter Solstice as defined by scientists—when the Sun is shining farthest to the south directly over the Tropic of Capricorn—occurs at 9:59 am Central Standard Time today.  You can figure out its arrival in your neck of the woods. The fact is that last night was the longest night of the year and today the sky will begin to grow light earlier each day.

In most pagan traditions around the Northern Hemisphere there were two ways to celebrate the Solstice.  Some lit fires in the darkest night to summon the return of the Sun.  Others gathered at dawn to in some way capture the first light of that return.  The latter often involved human construction on or in which that light would strike a significant stone or altar.  Think the pyramids in Egypt and the pre-Columbian Americas, Stonehenge, Greek temples, Native American medicine wheels, certain Medieval Cathedrals, and far simpler wooden structures in Northern Europe and Siberia. Either way, those who observe or recreate such rituals have found a way to do so.

Even if you do not observe the pagan doings—or shun them as the devil’s work—chances are that you to have been or will be celebrating the Solstice yourself. 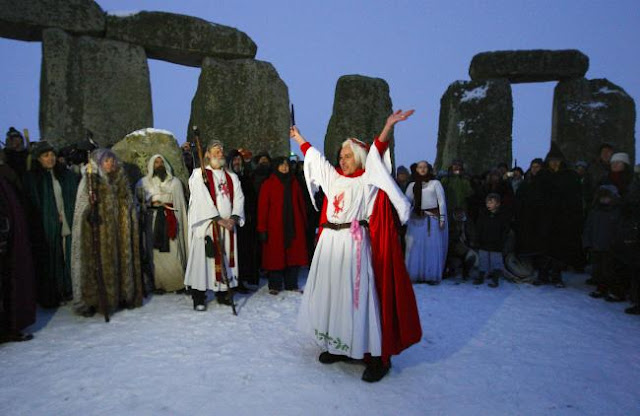 Modern neo-pagans celebrate the striking of a key stone at Stonehenge on Solstice morning with what they imagine a Druid ceremony might be like.


Buried in traditional folklore, swathed in symbolism, and steeped in metaphor, Christmas and Chanukah share the same impulses as Nordic Yule and its Celtic and ancient British cousins, Meán Geimhridh and Meán Geimhridhh beloved by contemporary neo-pagans of one stripe or another.  At their core there was in each of them a physical or metaphorical re-kindling of the light at the darkest hour of the year offering a glimmering of hope at a time of cold and starvation. 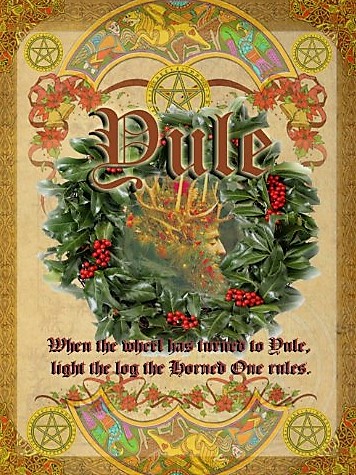 One pagan story of the Winter Solstice is the assentation of the the Holly King in the Germanic and Norse celebration of Yule.


Other celebrations were connected to the Solstice or mid-winter including the Feast of Santa Lucia as it is celebrated in Scandinavia, St. Stephen’s or Wren Day, New Years, and even Kwanza.

While the trappings of Christmas—the Yule log, the holly and the ivy, the Christmas tree, mistletoe, wassailing, and other customs are commonly known to be borrowed from pagan celebrations, the metaphor of the birth of the Son, bringing light and salvation to the world is often overlooked.  Among still nervous orthodox Christians, drawing parallels to pagan belief is still discouraged.

The early Church actively squelched efforts to confabulate the Feast of the Nativity with the Festival of Sol Invictus, introduced to the Roman Empire in the Third Century under the Emperor Elagabalus. It was a religious revolution that briefly upended Jupiter as the primary Roman God and put in his place the Invincible Sun, which combined the characteristics and cult practices of several sun gods including Syrian Elah-Gabal, the Greek Apollo, and Mithras, a soldier god of Persian origin. 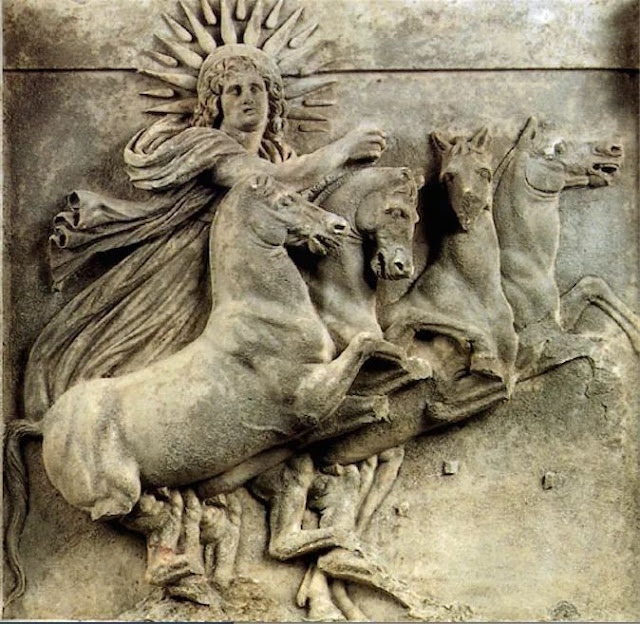 The  Roman celebration of  Sol Invictus on December 25 was adapted by the early Church as a mass for the Son of God--Christmas--on the same date.


The feast was set on December 25, during the Roman holiday period following Saturnalia.  Later, under the Emperor Aurelian as Christianity grew in influence and importance, attempts were made to incorporate worship of the Christ child into the cult as an incarnation of Sol.  When the Church became ascendant in the Empire, it did all it could to suppress the festival, but like many popular pagan customs, it was so integrated into many daily lives that it inevitably influenced how Christmas, by then assigned to the same calendar day, was observed.

Lisa Thiel is an artist and ceremonial singer whose healing song prayers and chants are among the most popular in the women’s spiritual movement today. Originally a holistic healing professional in Los Angeles, California, her spiritual path led her to study many of the world’s spiritual traditions and her teachers were yogis, shamans, Tibetan lamas, and wise women of the Goddess tradition.

The connecting thread throughout was the practice of sacred song for healing and empowerment, and an emphasis on the Sacred Feminine found in all traditions in one form or another. Lisa's songs are shamanic healing—medicine. Her songs have become a feature of women’s spiritual music and sung in circles around the world. 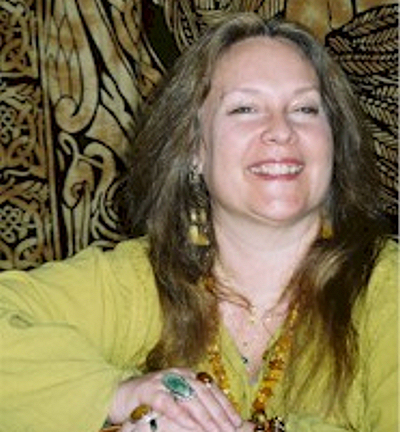 
Yule comes from her 2005 album Circle of the Seasons.