Another day, another Saint.  Today we consider how a Sicilian virgin martyr and a Neapolitan song, became central to a Scandinavian folk custom that looks suspiciously pagan.

In point of fact, no one is exactly sure, but the Feast of St. Lucy—Santa Lucia—observed annually on December 13, is ancient on one hand and surprisingly recent in its Norse guise.

Almost nothing is known about St. Lucy.  She was reported to be the daughter of a wealthy and/or noble family from Syracuse in Sicily in the early Fourth Century.  Syracuse was a sophisticated city originally founded as a Greek city state.  Lucy may have been descendent of the Greek aristocracy, more recent Roman rulers, or both.

Historically she has been pictured as a blonde, which suggests a Greek origin, although no one knows what she looked like.

Lucy—her name in Latin meant light—was evidently a devout Christian during a time when members of the Church were still being persecuted by the Roman Empire.  The traditional story has it that her pagan mother arranged a marriage to a rich and powerful pagan man.  Lucy protested and vowed to save herself for Christ.  After she prayed for a miracle that saved her mother’s life, her mother relented.  But the jilted suitor was enraged. 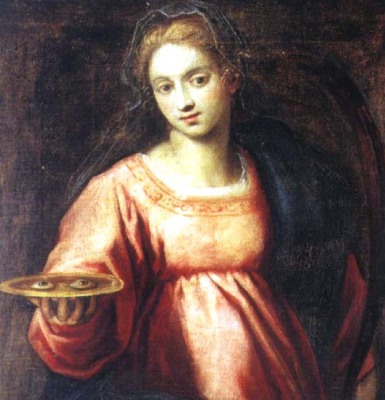 In this Renaissance painting martyred St. Lucy carries the eyes plucked from her head on a tray but miraculously can still see.


Here the story breaks down into many versions.  Either the swain tortured and killed Lucy, or he ratted her out as a Christian to local authorities.  Those authorities, or the far-off Emperor Diocletian himself, ordered her execution and/or torture.  Depending on the tale her eyes were first plucked out—a story that would later make her the patron saint of the bind—then she was stabbed in the throat with a sword while she was proclaiming her love of Christ.  Or she was burned alive, but the fire would not consume her, and she continued to testify.  In the end, no matter the details, she was a martyr to her faith and virginity.

Within a century she was the center of a cult venerating her as a saint, centered in Rome.  Veneration of her spread throughout the Empire, which by then was officially Christian.  Her feast day became one of the most important on the calendar.  Many legends sprang up about her and the miracles she performed.

One might assume that the Scandinavian veneration of her feast day dated to the era when the Norse countries were still Catholic.  But although her feast was undoubtedly on the liturgical calendar, there is no evidence of special celebrations during that time, at least by the Church.

Some historians believe that stories of St. Lucy may have entered the folk culture of the north after the Viking Normans conquered the island and established the Kingdom of Sicily in 1160.  As a matter of fact, there is historic evidence of the Normans introducing those stories and elevating the status of St. Lucy’s feast in Britain, where her feast day was thought to coincide with the shortest day of the year, which was pretty close under the old Julian calendar.  Unfortunately, there is no hard evidence that this was communicated to the Normans’ stay-at-home cousins in Scandinavia.

The Feast of Santa Lucia in its current form did not seem to be celebrated until after Norway, in 1537, and Sweden, in 1597 adopted Lutheranism as the state religion.  But Lutherans do not typically venerate saints.

One line of conjecture has it that in response to Luther’s ban on St. Nicholas as a winter holiday gift giver, replacing him with Kindchen Jesus, or Christkind, a German Lutheran cousin.  This theory conjectures that in Sweden young women or girls were robed in white to portray the Christ child and that somehow, over centuries, this morphed into a portrayal of the Sicilian Saint.  On the face of it this seems ludicrous, but stranger things have happened, I suppose.

Most likely veneration of St. Lucy surrounding the coincidence of her Feast Day with the Solstice in the old Julian calendar was introduced by sailors visiting Swedish ports—or in some accounts rescued from ship wrecks.  Others attribute it to Swedish mercenary soldiers returning from southern wars.  Take your pick.

In a 19th Century card, Santa Lucia is seen bringing her food gifts a dawn to the family home.


As developed and practiced in Sweden by the early 19th Century Santa Lucia arrives at a home in the dark with a donkey laden with delicacies and small presents.  It was the custom was for the eldest daughter of a family in a white robe for purity, a red sash for martyrdom, and a crown of glowing candles would enter the master bedroom of a home at dawn leading a procession of other women and girls of the family each carrying a candle.  The flaming crown was said to represent the return of light to darkness of the longest day of the year—an idea fraught with pre-Christian, pagan symbolism.  Or, to take a more Christian interpretation, it is meant to symbolize the fire that could not consume St. Lucy in some versions of the tale.

The leading girl with her crown comes bearing gifts of sweets, coffee, and cakes.  She and the others in the procession sing a song about the saint.  In more recent times it is the Neapolitan song Santa Lucia with lyrics adapted locally.  After the gifts are presented to the parents in their bed the girls would go on to sing other songs, usually Christmas carols.

This form of celebration evidently originated in the area around Lake Vänern in the late 18th Century and spread slowly to other parts of the country and eventually to Norway, Finland, Denmark, and areas around the Baltic.  Each region adopted variations to the tradition.

This festival was then a home observance and not part of either church or public ritual.

Public observations in Sweden did not begin until a Stockholm newspaper promoted one in 1927.  Now most cities and many schools elect a Santa Lucia each year for popular public processionals.  The eve of the festival has become a popular party night, particularly with young people and university students.

In Norway, where the tradition never took as deep a root, the private celebrations of Santa Lucia had nearly faded away in all but isolated and remote rural areas.  But during the Nazi occupation of World War II, the custom was revised as statement of cultural pride.  The symbolism of bringing light into the darkness obviously had political implications.  The collaborationist Quisling government tried to outlaw the practice. Which, of course, only made it more popular. After liberation, public Santa Lucia processionals became popular the home custom has nearly faded to extinction. 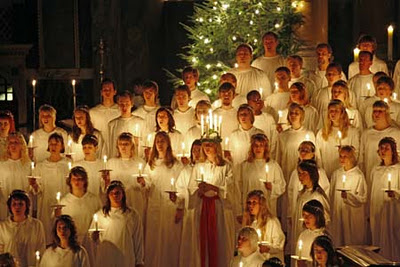 
The Scandinavian countries, despite still having official Lutheran state churches, are today among the most thoroughly secular in the world.  Santa Lucia Day, never an official holiday, has been stripped of virtually all religious meaning and is celebrated as a joyous ethnic festival.  In fact, the neo-pagan symbolism of the occasion has probably only made it more popular than ever.

Scandinavian immigrants brought the custom to the United States in the late 19th and early 20th Centuries where it took particular hold in rural areas with large, supportive immigrant populations especially in the cold states of the Upper Midwest—Wisconsin, Minnesota, and the Dakotas.  In big cities, even ones with large immigrant communities, the custom tended to fade by the second generation as it assimilated into the general population.

Today some heavily Swedish and/or Norwegian small towns celebrate with the yearly selection of a comely Santa Lucia and a public ritual and those Lutheran liberal arts colleges of Scandinavian origin with an abundance of blond co-eds and a well-developed choral singing tradition make the song central to their Christmas concerts.

The song Santa Lucia was a Neapolitan street song, the first song from that dialect to be translated into modern Italian in 1849 as the Italian unification crusade was in its early days.  The translator, Teodoro Cottrau, was the son of French-born Italian composer and collector of songs Guillaume Louis Cottrau.  He is sometime credited as the song’s writer and composer, but little-known A. Longo is sometime credited with the melody in 1835.  Other sources believe it was much older.

The original lyrics were not really about the martyr saint at all but celebrated the picturesque waterfront district, Borgo Santa Lucia, in the Gulf of Naples as an invitation by a boatman to sail with him to enjoy the cool of the evening.  By the late 19th Century, it was popular across Italy and was introduced to other European nations on the variety stages and concert halls. 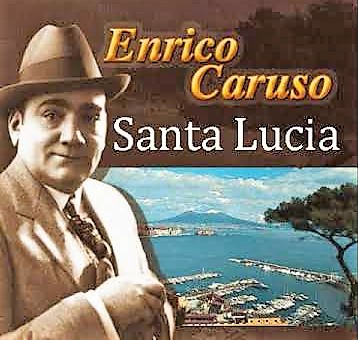 Enrico Caruso's 1903 recording of the Neapolitan celebration of the Bay of Naples probably introduced and certainly popularized the song in Sweden where lyrics reflecting to local celebration were set to the melody.


Thomas Oliphant, the Scottish musician, writer, and composer who is credited with Deck the Halls made a translation of the song into English in the 1870s which was also introduced in the United States.   But it was opera tenor Enrico Caruso’s 1903 recording that made the song an international sensation.

In Sweden adaptations of local song lyrics honoring the Saint were set to the Neapolitan melody. Several local variants were sung the best known of which is Luciasången, also known by its first words, Sankta Lucia, ljusklara hägring (Saint Lucy, bright illusion).  The common Norwegian version is Svart senker natten seg (Black the night descends.)  Other words are sung in Finland, Denmark, the Faroe Islands, and in Austria.

Sankta Lucia is sung in Swedish during a church processional and was featured on national television.

Posted by Patrick Murfin at 6:08 AM