Christmas is the season for novelty songs.  There are hundreds, probably thousands, of them.  A few become perennials—think I Saw Mommy Kissing Santa Claus, Santa Baby, or Grandma Got Run Over by a Reindeer—but most are ephemeral and quickly forgotten no matter how famous or popular the performer doing one is.  Take Hello, Mr. Kris Kringle by Kay Kyser and his Orchestra from 1939.  Kyser was probably the most popular band leader on radio that year and a budding movie phenomenon who prominently featured singers and members of his band in his recordings and Kollege of Musical Knowledge broadcasts, yet this zany number is virtually completely forgotten. 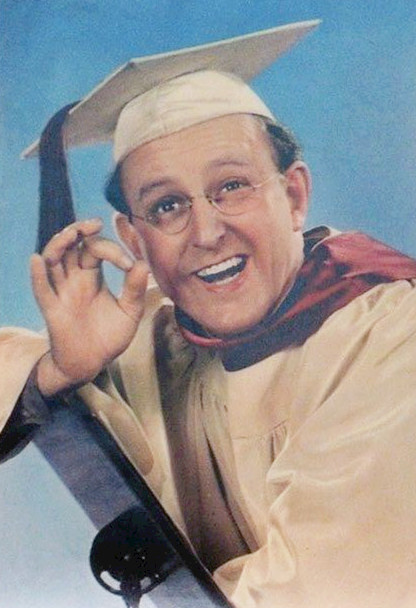 Kay Kyser, the Ol. Perfessor of the Kollege of Musical Knowlege.

James Kern Kyser was born in Rocky Mount, North Carolina in 1905 to Paul Bynum Kyser and Emily (née Howell) who was the pioneering first registered pharmacist in the state.  One of six children, he was educated at the University of North Carolina where his exuberant personality as a cheerleader and a producer of plays caught the attention of saxophonist Hal Kemp who led the collage dance band, the Carolina Club Orchestra.  In 1927 Kemp decided to head to New York to start his own band and persuaded Kyser to take over his old band.  Kyser took some clarinet lessons but was not really much of a musician.  He led be band as a wise-cracking front man/conductor and occasional vocalist.

Kyser kept the band together after he graduated in 1928 and adopted Kay Kyser as a snappy, easy to remember stage name.  Despite some hard scrapple early years, he turned out to have an astute business and organizational talent.  He created a genuine family atmosphere that kept the core of the band together and loyal.  They recorded several sides for Victor that were unsuccessful but managed to stay on the road through the early years of the Depression. 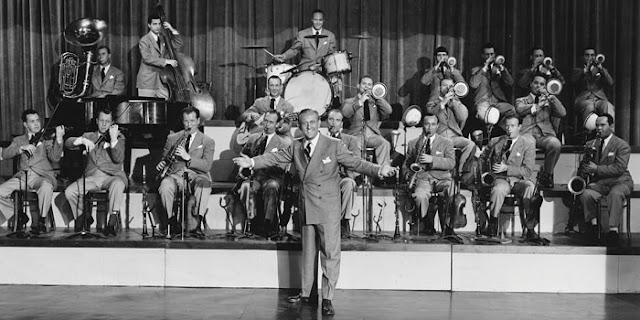 Kay Kyser with his Orchestra.

Kyser began trying to build an audience on slow Monday nights late 1937 with Kay’s Klass, an amateur night interspersed questions from Kay to the contestants to relax them. With plenty of comedy patter and Kyser singing the introductions to the songs, the orchestra was soon being broadcast the re-named College of Musical Knowledge regionally on Mutual Broadcasting System beginning in 1938.  Lucky Strike cigarettes bought the show in 1939 and moved it NBC in New York with Kyser as The Ol’ Perfessor, spouting catchphrases, as “That’s right—you’re wrong”, and “C’mon, chillun! Le’s dance!”  In nightspot appearances and in front of live radio audiences Kyser cavorted in an academic robe and mortarboard.  The NBC show ran from 1939 to ’49, much of that time as the top music program on the air.

The band handled personnel changes.  Ginny Simms left for a successful Hollywood career.  She was replaced by a pair of other singers and then in 1943 by model and actress Georgia Carroll who Kyser married.   Harry Babbitt departed and was replaced by Mike Douglas among others.  Jane Russell cut two hit sides with the band, although she did not appear on the radio show.  From the late ‘30s through the early post-war years Kyser’s Orchestra charted 11 #1 hits. 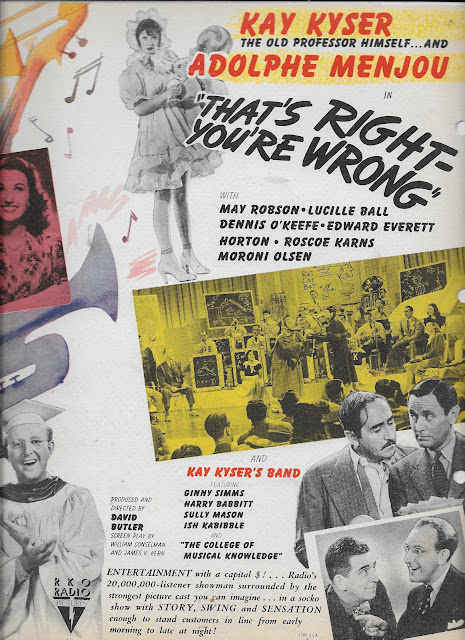 His popularity led an RKO movie contract.  His first film in 1939 That’s Right, You’re Wrong co-stared Ginny Simms, a brunette Lucile Ball, Adolph Menjou, and Dennis O’Keefe.  In 1940 the band co-stared with Peter Lorre, Boris Karlov, and Bella Lugosi in You’ll Find Out.  The next year Kyser and the Orchestra were billed with John Barrymore in his last screen appearance and Latin bombshell Lupe Velez in Playmates.   My Favorite Spy came out in 1943 with Ellen Drew, Jane Wyman, and Robert Armstrong.  Around the World was a fictionalized version of Kyser’s international travels entertaining GIs with Mischa Auer, Joan Davis, and Marcy McGuire, Kyser moved to MGM for Swing Fever with Marylin Maxwell, William Gargan, and Lena Horne.  His final starring feature, Carolina Blues co-stared Ann Miller, Victor Moore, and his wife Georgia Carroll.  The movies were popular light entertainment, but Kyser and the Orchestra may be best remembered for their appearances in The Stage Door Canteen and As Thousands Cheer, both war-time moral boosters featuring turns by top stars.

America’s entry into World War II deeply affected Kyser.  He cancelled all future appearances except a few for which he was contractually bound.  He announced that he and the Orchestra would continue their radio program and movie obligations but would dedicate all of their other efforts to supporting the war effort.  True to his word they became the first stars to do a performance for the troops, even before Bob Hope, at a California Marine base in early 1943.  He would make several domestic troop tours including leading a Cavalcade of Stars in addition to jaunts to North Africa, Australia, and the Pacific.  He took a tour introducing his film Around the World to 60 bases across the country. With Bette Davis he was a co-founder of the Hollywood Canteen missed only one night there in nearly a year.  He also did bond drives and recorded special Armed Service Radio programs.  The band’s war-time hits included Praise the Lord and Pass the Ammunition and Coming in on a Wing and a Prayer. 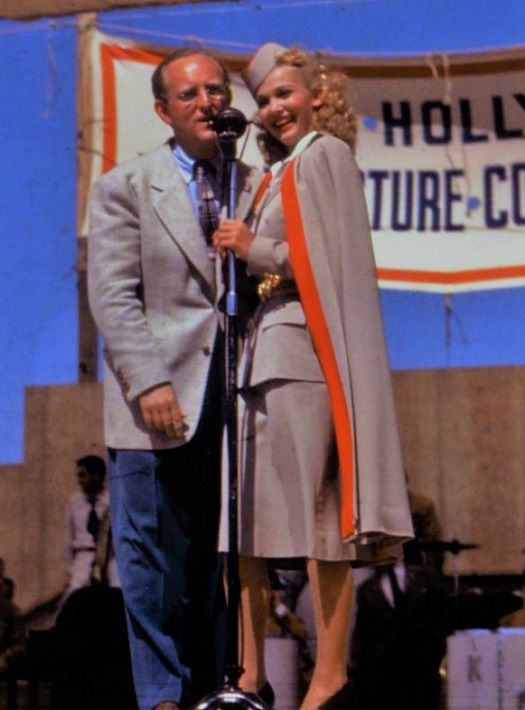 Kyser and Carole Landis on a Hollywood USO camp tour.  Both starred in movies based on their troop tours--Around the World for him and Three Jills in a Jeep for her.

By 1944, however, Kyser was experiencing great pain from arthritis in his feet.  His interest in health led him to support the University of North Carolina’s Good Health Campaign by arranging a recording by Frank Sinatra and Dinah Shore with his Orchestra of It’s All Up to You by Sammy Cahn and Jule Stein.  He continued to work with and support the campaign for some time.

But the failure of conventional medicine to relieve his pain led him to Christian Science where he believed he found some relief.  He became increasingly active with the church in the post-war years.

Kyser intended to retire at the end of the war due in no small part to his health issues.  But he could not break his NBC radio contract or his recording obligations.  His active participation had been limited to showing up for broadcasts leaving the band’s leadership in other hands.  When the radio show ended he quietly disbanded the orchestra with no announcement or explanation.  He was lured back for two seasons in 1949 and 1950, of Kay Kyser’s Kollege of Musical Knowledge on NBC-TV featuring Ish Kabibble and vocalists Mike Douglas, Sue Bennett, and Liza Palmer, plus The Honeydreamers vocal group and the dance team of Diane Sinclair and Ken Spaulding.  He disbanded the Orchestra for the final time when the show ended.  He spent his time with his wife Georgia and their three children.  He served as a North Carolina Christian Science speaker and leader.  In the 1970s, Kyser ran the film and television department of the Christian Science Church in Boston and in 1983, he became its President, a one-year position.  He referred to it as “honorary”, joking that he hadn’t “been elected Pope or anything.” 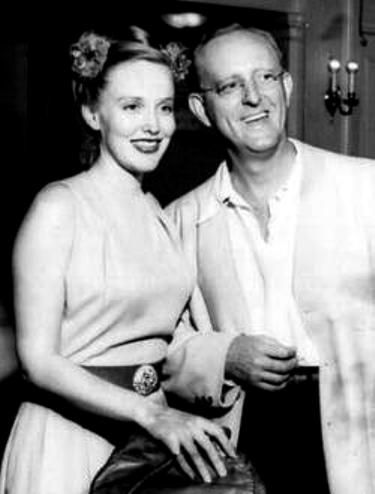 Kyser and his wife Georgia Carroll.

Kyser died of a heart attack in Chapel Hill, North Carolina on July 23, 1985 and was buried at Old Chapel Hill Cemetery.  Kyser was inducted into the North Carolina Music Hall of Fame in 1999.  UNC is custodian of a large archive of documents and material donated by his widow and made available to the public in April 2008.

Despite all of this Kyser is not well remembered today, his fame eclipsed by Big Band leaders like Benny Goodman, Glenn Miller, and the Dorsey Brothers.  Perhaps his reputation as a novelty act worked against him.  Or maybe his movie musicals did not hold up well on occasional Turner Classic Movie re-broadcasts. 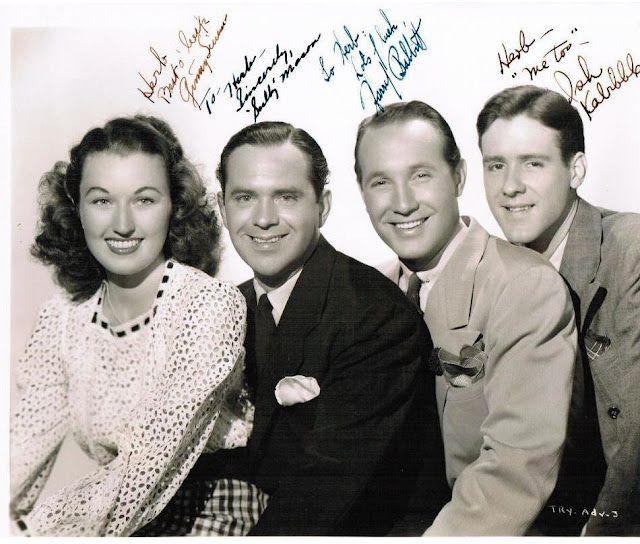 The holiday song today, Hello, Mr. Kris Kringle features the classic pre-war line up including Ginny Simms, Harry Babbitt, Sully Mason, and Ish Kabibble.  It was undoubtedly aired on the radio show before being released by the Brunswick Label’s parent Columbia Records.