Jingle Bells by Glenn Miller and His Orchestra, 1941.

Earlier this week was the 75th anniversary of the disappearance and presumed death of Major Glenn Miller somewhere over the English Channel on a foggy night.  Miller, the most famous and popular of all big band leaders was then in command of the Army Air Force Band in Europe.  He left England on December 14 in a small single engine plane to join the Band in Paris to rehearse and prepare for a special Christmas broadcast on Armed Forces Radio.  The public first heard of his disappearance when his assistant Tech. Sgt Jerry Gray conducted the band for the concert. 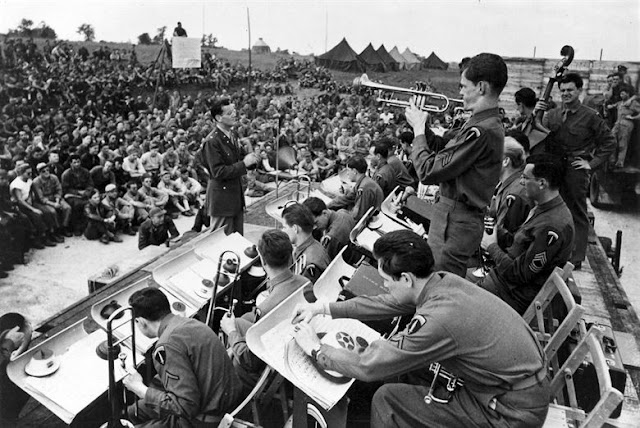 Major  Glenn Miller leading the Army Air Force Band at a camp show in England before his disappearance.

One of the arrangements played on that broadcast was adapted from the 1941 hit recording of Jingle Bells by Glenn Miller and his Orchestra.

Before he left for the service Miller was the best-selling recording artist from 1939 to 1942. His records included In the Mood, Moonlight Serenade, Pennsylvania 6-5000, Chattanooga Choo Choo, A String of Pearls, At Last, (I’ve Got a Gal In) Kalamazoo, American Patrol, Tuxedo Junction, Elmer’s Tune, and Little Brown Jug. In just four years, Miller scored 16 # 1 records and 69 top-10 hits—more than Elvis Presley (38 top 10s) and the Beatles (33 top 10s) did in their careers.

Jingle Bells is the category of Christmas songs that really aren’t.  It never mentions Christmas and was never meant to be associated with the holiday at all.  Yet it has become the most oft-recorded secular seasonal song because its catchy, bouncy melody is easily adaptable to almost any musical style.  Also, because it is in the public domain and thus a cheap addition to any holiday album. 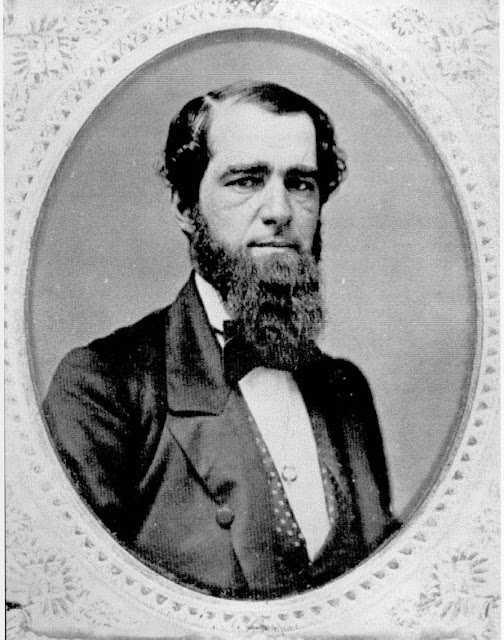 The song’s origins stretch back more than 150 years. James Lord Pierpont was the prodigal younger son of the Rev. John Pierpont, a close associate of William Ellery Channing and an influential figure in the founding of American Unitarianism who latter rose to prominence as an ardent abolitionist. Among James’s siblings were John Jr., another future Unitarian cleric and a sister, Juliet, who became the mother of arch capitalist J.P. Morgan.

The artistically inclined young James was the preverbal preacher’s son—restless with restrictions at home, rebellious, and often in trouble. Born in 1822, he ran away to sea at the age of 14 aboard the clipper ship Shark. Another rebellious Unitarian lad of the same period was Richard Henry Dana, whose account of misery at sea in his book Two Years Before the Mast that shocked the sensibilities of mercantile New England.

Returning to New England he married and fathered three children while casting about in a series of failed business ventures. Lured to California by the Gold Rush of 1849 he thought to strike it rich not by mining himself, but by taking tintype photos of the newly rich prospectors. But like his other ventures, his San Francisco photography shop ended in failure. 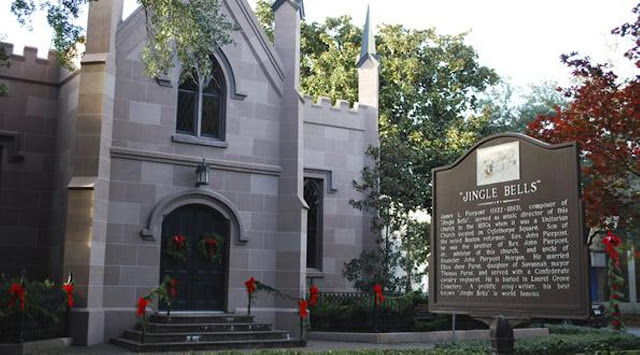 The historic Savannah Unitarian Church, the largest in the South, where James Pierpont's brother was the minister and where he was employed as the organist.  The church posts it claim on Jingle Bells on the historical marker out front.

After his first wife died in 1853 he took his young family to join his brother, the Rev. John Pierpont, Jr., minister of the Unitarian Church in Savannah, Georgia, which was the largest Unitarian congregation in the South.  He took up residence and earned a modest living as organist in his brother’s church. Eventually he also set himself up in business selling house paint, varnish, wallpaper, window glass, and art supplies.  In 1857 he married the daughter of a prominent Savannah civic leader who would go on to serve as the city’s Civil War mayor.

Sometime during those years, restless as ever and lonesome for his lost New England childhood, he penned a song he called The One Horse Open Sleigh.  He may have drawn as inspiration a sleighing party that he had rapturously reported to his mother in an 1832 letter. 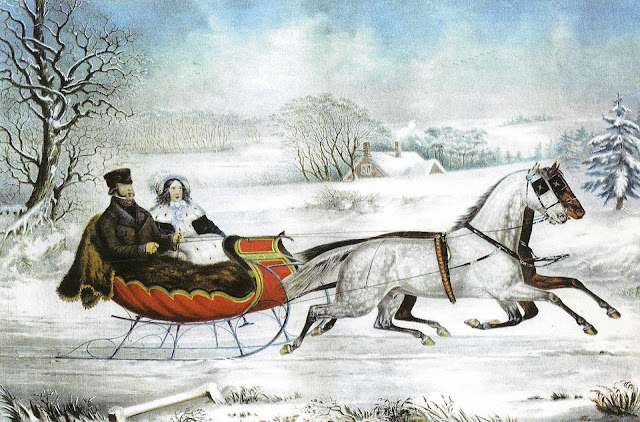 This popular Currier & Ives print embodied the fun and romance of New England winter sleighing, although this couple was pulled by a pair of horses and their tails have not been bobbed.

In snow bound New England the sleigh was both a necessary form of transportation and a winter diversion. There was a whole genre of sleighing songs. The best known today, Over the River and Through the Woods is associated with that quiescently New England holiday, Thanksgiving.  But it accounted a family expedition in a large, multi-passenger sled of the sort often pulled by a team. Pierpont's song was about a cutter, a fast two seat light sleigh often pulled by a thoroughbred trotter. It is a courtship song, with a young man out to impress Miss Fanny Bright with his speed and daring until he miscalculates the depth of a drift, and the sleigh becomes “up sot.”

The song may have mystified his brother’s Southern parishioners, but James mailed copies home and it was sung in Medford, Massachusetts at Thanksgiving parties sometime in the mid 1850’s. This would lead to a later spurious claim that the song had been written there.

James copyrighted and published the song in 1857. Two years later it was issued in a new edition as Jingle Bells or the One Horse Open Sleigh. Within a decade it was a popular American parlor sing-along favorite, linked in the public’s mind with the colorful Currier & Ives prints of sleighing scenes that adorned many homes.  It was considered a winter song, but not a Christmas one.

Unfortunately, James never profited much from royalties from the song. 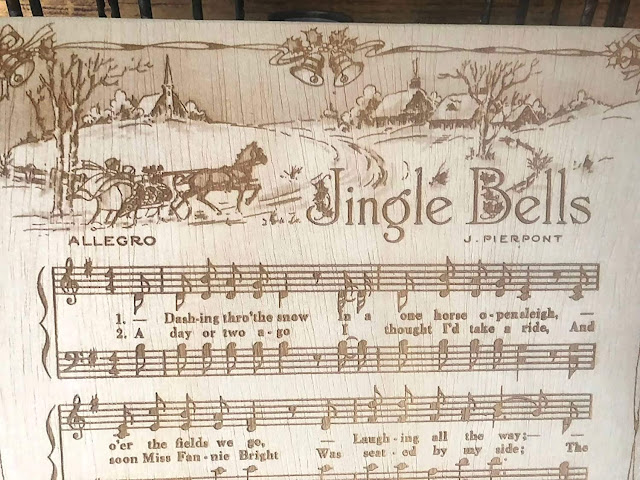 Early piano sheet music for Jingle Bells.  Although Pierpont was properly credited, this was one of the many editions published--we would call it pirated today--without paying copyright royalties.

Dark clouds were gathering that would change his life forever.  As the passions stirred by the 1860 presidential election grew heated brother John, an abolitionist like his father, was forced to give up his pulpit and return to the North costing James his job at  church.  James remained in Savannah, now an ardent supporter of the Southern cause.  After war broke out the combination of a war economy and the increasingly effective blockade of Southern ports destroyed James’s shaky business venture.

At the age of 40 he enlisted as a clerk in the First Georgia Battalion, which became a part of the 5th Georgia Cavalry. Although he was a gentleman with connections to a leading aristocratic family, James never rose above the rank of private. He remained in the Confederate Army for the duration of the war, although his rear echelon unit saw little action, mostly patrolling in defense of railroad lines and later scouting Yankee positions during the Atlanta campaign.  His greatest contribution to the Confederate war effort came as the composer of patriotic songs including We Conquer or Die, Our Battle Flag, and Strike for the South.   Meanwhile his father and brother served as chaplains in the Union Army.

After the war there were hard times in the South and James and his family shared in them. Eventually he found a niche as professor of music at Quitman Academy. He spent his last years in Florida at his son’s home in Winter Haven before dying in 1893.

James Pierpont’s claim on our seasonal culture is indisputable.  By the early 20th Century, as the automobile was replacing the horse, Jingle Bells was being melded into the general sentimentality of the Christmas season. In the days before the explosion of popular secular holiday songs like White Christmas, I’ll Be Home for Christmas, Have Yourself a Merry Little Christmas, and The Christmas Song, it provided a much needed non­religious song suitable for performance in public schools and in mixed gatherings. The simple, lively tune was easy to sing and easy to adapt to a host of musical styles. It has become an indisputable Christmas classic.

Miller’s record in 1941 along with Bing Crosby’s White Christmas became one of the first big holiday hits boosted by live radio performances.  There were not yet any seasonal Christmas channels or special charts for holiday songs.  Holiday music on the radio was mainly traditional carols and children’s songs.  What popular music songs that existed were hits if the sheet music sold for parlor piano sing-alongs sold well.  The power of Miller’s popularity and his catchy arrangement helped usher in a new era. 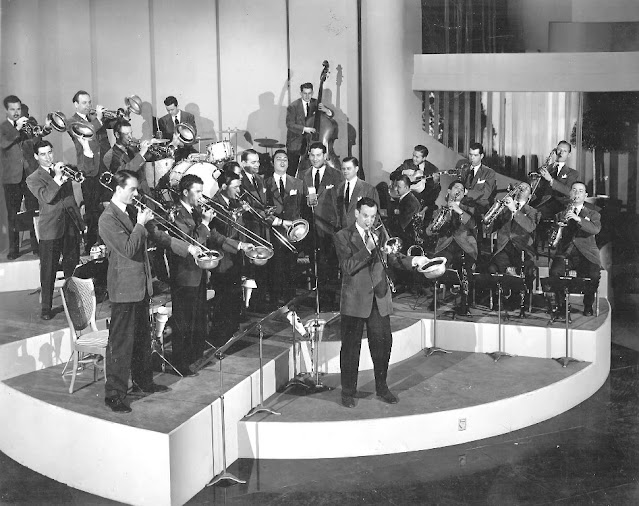 Glenn Miller and His Orchestra from their final movie, Sun Valley Serenade.  The Modernaires are at the microphone behind him.

This recording featured staples of the Miller Orchestra—Tex Beneke, Ernie Caceres, and the Modernaires.  It was released in June months before Christmas and rose to #5 on the charts.