What Are You Doing New Year's Eve by the Orioles.

Back in the day everyone who was not a misanthrope or a shut-in went out on New Year’s Eve.  The toffs wore their white ties and tails and elegant evening gowns and furs to don paper hats and dance the night way to orchestras in sprawling Art Deco ballrooms.  At least that is what all of the old movies taught the rest of the Depression and war weary populous.  But those average Joes and Jills also went out and celebrated with their own funny hats and noise makers in urban ballrooms, lodge halls, piano bars, and neighborhood saloons.  And it was not just attractive young people.  Period photographs reveal that revelers include many middle aged and older couples.

Celebrating in the U.K. in the 1930s--a night to forget the Depression.


Drunk driving enforcement and cozy stay-at-home TV extravaganzas have been eating away at New Year’s Eve revelry for years.  Last year the Coronavirus precautions left the crystal ball to drop in an empty Times Square and in most places clubs and nightspots are shuttered or open to extremely limited capacity.  This year a raging resurgence of the Omicron variant is scaring many folks away from re-scheduled public hoopla and causing some clubs and venues to shut down either as a precaution or because performers and staff have been infected. Dancing and smooching strangers at midnight will be discouraged in all but the kamikaze you-can’t-tell-me-what-to-do-libtard states. 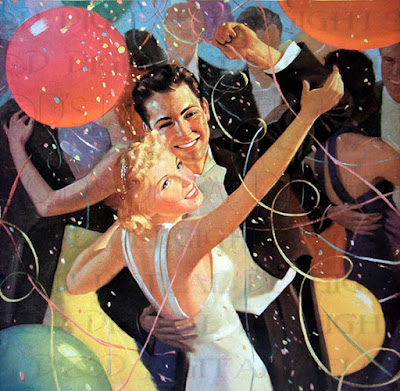 
But way back when for those who were not married or already romantically involved the question what are you doing New Year’s Eve? was of vital importance.  Nobody wanted to be alone on New Year’s and everyone wanted someone to kiss at the stroke of midnight.  That is what songwriter Frank Loesser had in mind in 1947 when he made the question into a song—What are You Doing New Year’s Eve. Margaret Whiting, barely out of her teens recorded it for Capitol Records that year without much note taken of it.

Although it was performed on radio shows that often featured the popular composer’s work, it didn’t become a real hit until 1949 when the early doo-wop group The Orioles hit #9 on Billboard’s Rhythm & Blues chart.

Despite that success, the song did not become an instant standard or holiday favorite.  In fact, it languished seldom recorded until Nancy Wilson hit #17 on Billboard’s Christmas Singles chart in 1965.  Two years later the same recording returned to the Holiday Chart.  Wilson’s silky and sexy, take helped make the song a something of a jazz standard sung by the likes of Ella Fitzgerald and Nat King Cole. 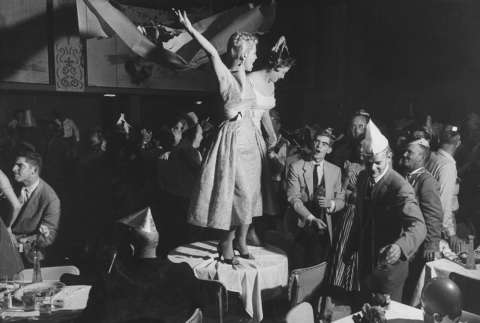 New Year's revelry for ordinary folks--somewhere in a lodge hall, bar back room, or neighborhood venue.


But the song still didn’t register as a pop standard until the new century and streaming video from YouTube made it go viral.  In 2011 an utterly charming impromptu duet with Zooey Deschanel and actor Joseph Gordon-Levitt made a splash ultimately attracting more than 20 million hits.   And in 2017 Scott Bradlee’s Post Modern Juke Box covered the song featuring vocalists Rayvon Owen and Olivia Kuper Harris and has registered more than a million views. 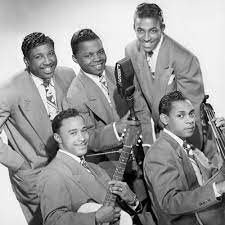 Many consider the Orioles from Baltimore the first successful doo-wop recording artists and the first vocal group of post-War Rhythm & Blues.  Four voices in harmony accompanied only by guitar and up right bass.