The Chalica Song performed at a Unitarian Universalist congregation.

Regular visitors to this little pop stand at the far end of the cul de sac know that the proprietor is a proud Unitarian Universalist and quite fond of the faith’s quirky adherents.  But, oh boy, are we ever an earnest bunch fiercely proud of our history and heritage, our anti-racism, progressive social justice activism, and non-creedal religion.  Toss in the large numbers of Humanists who break out in rashes at the mention of God and we can be the butt of a lot of jokes, not all of them as semi-fond as Garrison Keillor’s.

Take the recent development of Chalica for example. Chalica is a holiday celebrated by some, but far from all, UUs. It usually begins on the first Monday in December and lasts seven days but notoriously independent and sometimes contrarian congregations celebrate at different times and in different ways.   On each of the seven nights one of the Seven Principles of the UUA Unitarian Universalism is honored. On each day, a chalice is ignited, the day’s principle is read, and ways of honoring the principle are highlighted like volunteering or donating to a social justice cause.  There is no rule for how the chalice or display should look, but many set seven candles around the chalice, one for each Principle. Activities on each day vary, and may include discussions, group activities, and songs. 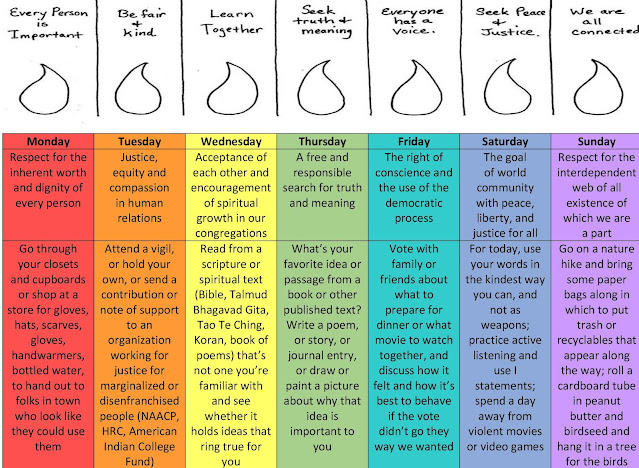 The nights of Chalica representing the Seven Principles of the UUA with suggested activities.

Chalica was created in 2005 by Daylene Marshall out of a wish to have a holiday organized around Unitarian Universalist values and frankly to avoid the religious trappings of other seasonal celebrations.  While it has gained some followers only a minority of Congregations and individual members actively participate each year.

You may notice that the format and concept are borrowed or culturally appropriated from Hanukkah and Kwanza—a common but controversial practice of many UUs. 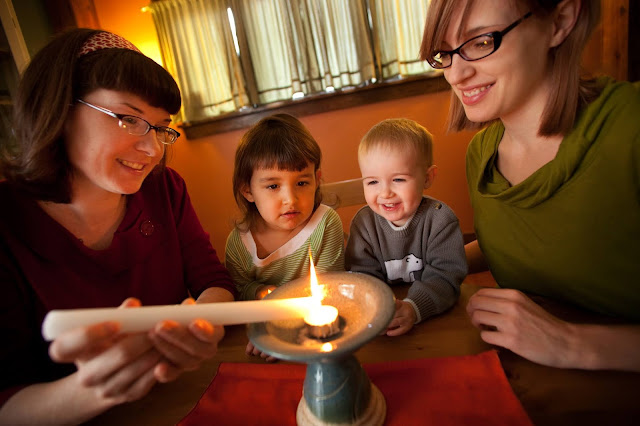 Since most UUs can't be dragged to church more than once a week, many families observe it a home.

Fortunately, not all UU’s are humorless.  Many of us can laugh at ourselves.  Take this song performed at a UU Congregation in 2017 and written by Evan Austin who borrowed the tune and concept from Adam Sandler’s Hanukkah Song.