We interrupt the seasonal songs of Winter Holidays Music Festival for a more private celebration if you don’t mind.  Forty years ago, on a below zero December 18, 1981 at Chicago’s St. Francis Xavier Church on the North Side Kathy Brady-Larsen, a young widow, consented to marry beneath her.  The groom was a scruffy no-account with dim prospects named Patrick Murfin.

That summer we had renewed an old acquaintance at Consumer’s Tap on Lincoln Avenue.  We had a nodding acquaintance a decade earlier while I was on the staff of the Chicago Seed and she was a 17 year old Seed street seller who shared an apartment with other members of the staff collective.  We were re-introduced by Kathy’s best friend since childhood and another staff member, Mary Kay Ryan.

In the interim Kathy had married Randy Larson and had been left a widow with two small children.  Carolynne was 9 years old and Heather just 6.  They lived in a Greystone two flat on Albany half a block north of Diversey.  She was working in customer service for Recycled Paper Products, the alternative greeting card company.

I had recently recovered from a period of actual homelessness and was living in a single room in a building on Fullerton west of Lincoln.  It was the kind of place with a bathroom down the hall next to a pay phone.  It was furnished with a Murphy bed, a table, two straight chairs, a sink, and a roving herd of cockroaches.  I was working as a second shift custodian at the trade school Coyne American Institute a few blocks down Fullerton and mucking out Consumers for a couple of hours after closing.

After a brief whirlwind courtship, Kathy invited me to move in with her on Albany mostly to avoid having to pass through the rat infested ally behind Consumers to get to my building.

In early fall I took a trip to Kimberly City, Missouri where my parents W. M. and Ruby Irene Murfin had retired.  Just after I arrived my mother died in the hospital after a long illness.  I numbly endured a memorial service and together with my twin brother Peter, formerly Timothy, we buried her ashes in her mother’s grave in Martinstown, Missouri.  On the long bus ride back to Chicago I did a lot of thinking about life and family.  When I got back to our apartment very late one night, I proposed to Kathy as we sat at the kitchen table.  To my astonishment, she agreed.

We decided to do it sooner than later and set the December date because the girls would be getting out of school for Christmas break.  We had to make hasty arrangements on very little money.  Kathy found an ivory formal gown trimmed in lace, probably intended as a prom dress, at a Polish clothing store on Milwaukee Avenue for $20 or so.  I got a brown hand-me-down suit from my father.  We had custom wedding bands hand made by a local silver smith for $60.  A bartender from Consumer’s was opening her own saloon, Lilly’s a bit up Lincoln and she agreed to let us have our reception there for free.  I had invitations illustrated by my IWW fellow worker Carlos Cortez printed on the sly at the Coyne American print shop.  We found a blues band called Whiskey River to play for a few dollars in hopes of getting a regular gig from Lilly’s. 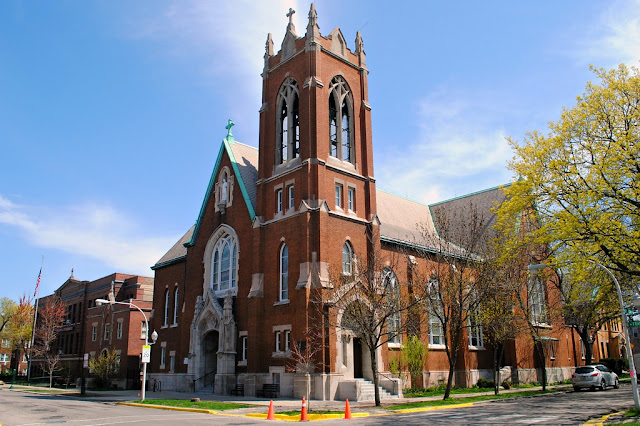 
Luckily the assistant pastor of St. Francis was a close friend of Kathy’s and dispensed with the pre-cana counseling and ignored my unchurched agnosticism.  I had only gotten over my ni deo, ni patron period of actually drunkenly pissing on churches a few years before but my Wobbly friends were betting the church would collapse on my head when I walked down the aisle.

We assembled an unusual wedding party.  Kathy’s matron of honor was her close friend and former mother-in-law Pat Kressel.  My best man was 81 year old Fred W. Thompson, my mentor in the IWW and my co-author of The IWW Its First Seventy Years: 1905-1975.  Carolynne and Heather were included in the party and got to pick out their own dresses.

Preparations at the Albany apartment were hectic that morning and I tried to remain calm.    Amid the chaos, my main concern was that I would not make the classic sit-com mistake of forgetting the rings.  I didn’t, but in the rush I left the wedding license on the dining room table, which was not discovered until after Pat Kressel ferried us to the church in her car.  Someone had to be rapidly dispatched to retrieve the document. 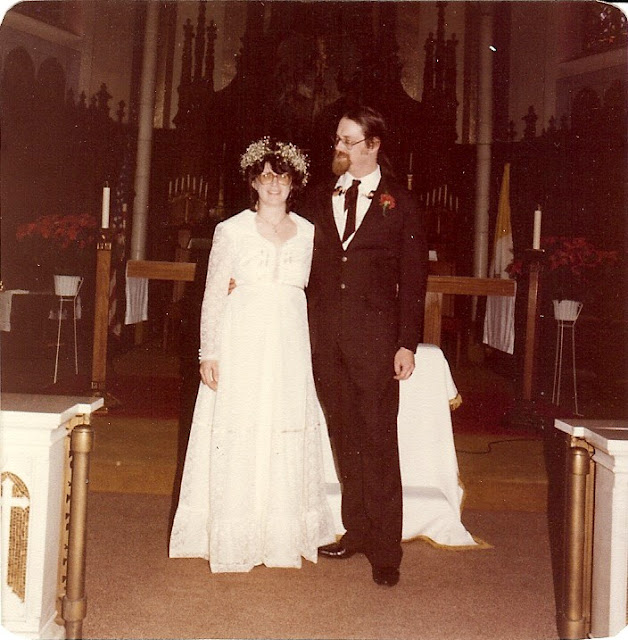 The bride and groom.


In front of few dozen family and friends we finally walked up the aisle.  We wrote our own vows and I had some trouble getting the ring on Kathy’s finger.  Due to my heathen status, there was no Mass.  Just like that, after signing the license, we were married.

We returned to the apartment for a wedding dinner catered from Browns Chicken.  The place was packed by Kathy’s large family, most of whom I did not yet know.  I secretly called them the Polish Army.  On my side there was just my father and his new girlfriend, my mom’s former caregiver Rae Jane Mason, my Aunt Millie and Uncle Norm Strong and my cousin Linda, my playmate from childhood.  After the food was cleared there was time for a Brady family tradition—a game or two of nickel-pot Thirty-one.  And some Christian Brothers Brandy shots with Kathy’s grandmother, father, and Uncle Al.

The reception at Lilly’s was lively and crowded.  It doubled as the bar’s opening night, so strangers wandered in and mingled with the celebrants.  I had sprung for a half-keg at the bar, which didn’t last long but folks forked over their own cash for more suds or shots.  The band was loud and people got up to dance, even Kathy’s grandmother who was more used to polkas.  The girls and their cousins observed the general cavorting from an upstairs balcony.  I, of course, drank too much. 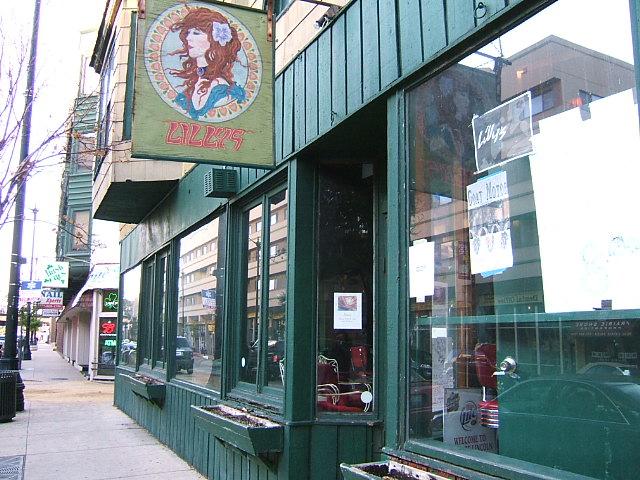 The wedding reception doubled as the opening night of Lilly's, a Lincoln Avenue saloon and music venue opened by a former bartender at my old regular hang out,  Consumer's Tap.


Finally, it was time to cut the sheet cake ordered from a Milwaukee Avenue bakery and decorated with a hand-blown glass heart created by an Albany Street neighbor.  We opened a pile of gifts and my suit pocket was stuffed with envelopes of cash.  Around midnight we tottered out of the saloon.  I had an armload of gifts and managed to break the cake topper.  I was, of course, embarrassingly drunk.  So much for wedding night romance. 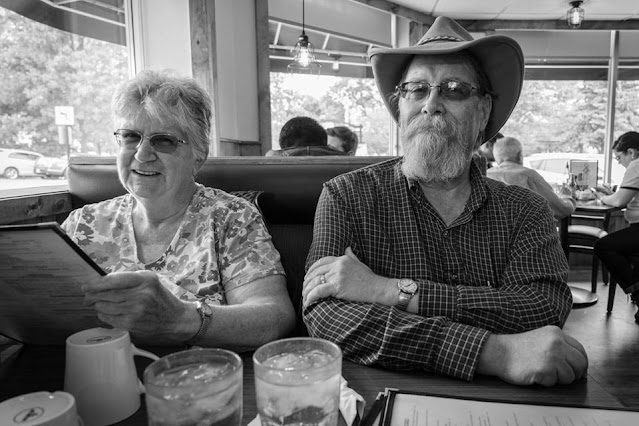 Kathy and the Old Man in Woodstock in 2018.  Photo by Shimer pal Bill Delaney.


After 40 years, ups and downs, and a lifetime of family adventures Kathy and I are still together.  Astonishing! 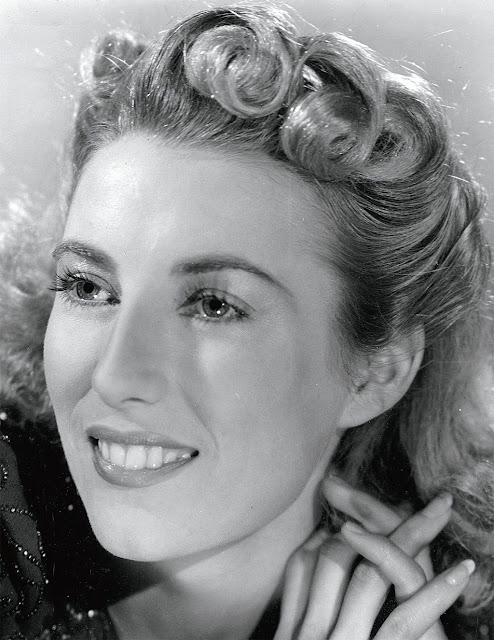 Vera Lynn, the World War II British  thrush and sweetheart had a hit with The Anniversary Waltz across the Puddle.


In honor of the occasion, I dedicate The Anniversary Waltz to Kathy even though we bopped to blues jam.  The song was written by Dave Franklin with lyrics by Al Dubin in 1941.  It was first recorded by the ubiquitous Bing Crosby but was only a minor hit.  It did better across the puddle when it was recorded by British thrush Vera Lynn and connected with war-time audiences.  Connie Francis later had a hit with the song and Desi Arnez as Ricky Ricardo sang it to his wife in the the I Love Lucy episode Hollywood Anniversary.  If it was good enough for Lucy, I hope it’s good enough for Kathy.