Today is the first day of the traditional Mexican celebration of Las Posadas, a novenario or novena—an extended nine day devotional prayer observed between December 16 and Christmas Eve December 24.  The more than 400 year-old custom has spread to other Latin American nations and to the Mexican diaspora in the United States. 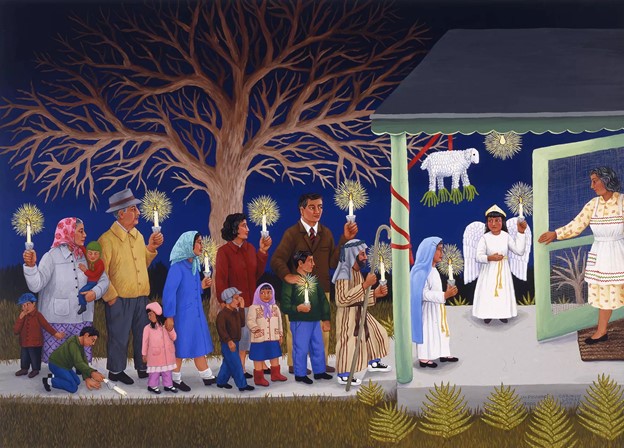 A neighborhood Posada procession in a painting by Carmen Lomas Garza in the National Museum of Mexican Art in Chicago.

Las Posadas derives from the Spanish word posada for a lodging, or inn and during the nine-day period during Advent it re-enacts the Holy Family’s search for shelter in Bethlehem.

Typically, in villages and city neighborhoods two people are dressed as María and José and certain houses are designated to be inns.  They are led by a procession carrying luminaria—candles inside a paper shade or bag.  They actors travel to one house each night for nine nights. At each house, the resident responds by singing a song, the pair are recognized and allowed to enter; the guests come into the home and kneel around the Nativity scene to pray, usually, the Rosary. The final location may be a church instead of a home. 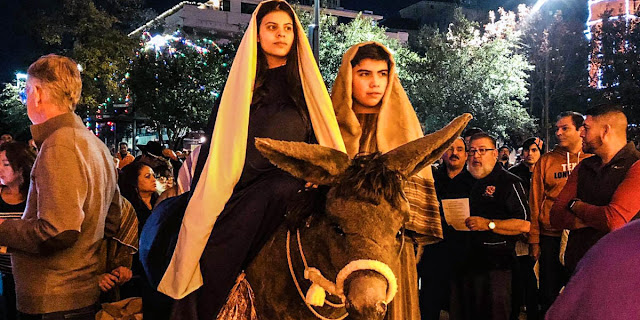 A Posada procession with José and María riding on a burro in search of shelter.

Mary usually rides a burro if one is available.  Attendants such as angels and shepherds join the procession and along the way, or pilgrims may carry icons of the holy personages instead.  Children often carry poinsettias The procession is followed by musicians, with the entire procession singing posada songs like Pedir Posada. At the end of each night, carols are sung, children break open star-shaped clay piñatas laden with sweets, and everyone sits for a feast.  In Mexico and in Mexican neighborhoods in the U.S. homemade tamales are featured. 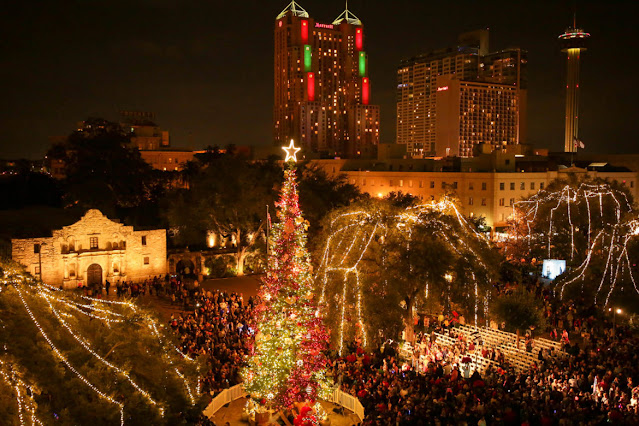 A Posada procession at the Alamo in San Antonio, Texas.


In many cities there are even larger and more elaborate public processions.  In the U.S. the largest and most notable of these takes place along the River Walk of San Antonio, Texas where landmarks like the Alamo, Arneson River Theater, Museo Alameda, and the Spanish Governor’s Palace replace private homes and ends at the Cathedral of San Fernando. The River Walk is lined with luminarias in addition to elaborate Christmas light displays.

In Chicago the Pilsen and Little Village neighborhoods have notable Posadas and many Latino Catholic parishes and Protestant congregations stage their own, often ending with a living Nativity on Christmas Eve.

In the U.S. the Posada tradition has taken on new significance as an allegory for the search of refugees, asylum seekers, and undocumented residents for a safe haven. 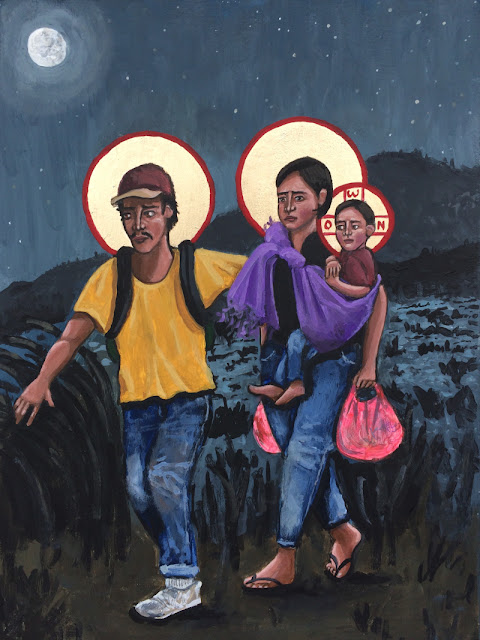 The Holy Family as modern refugees and asylum seekers.

There are many Posada songs.  Pedir Posada is probably the best known.  Here it is presented with Spanish lyrics and images of celebrations.